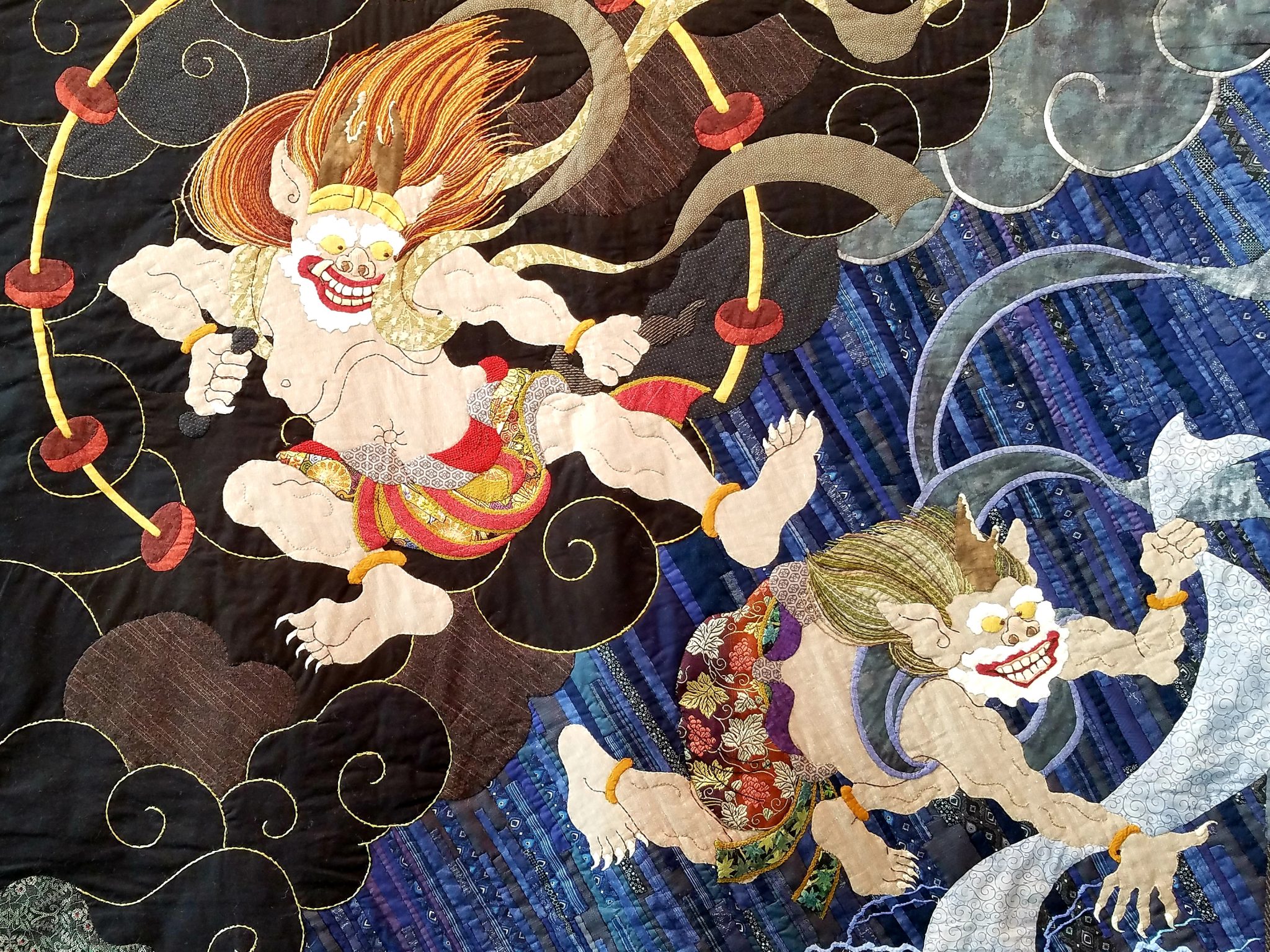 Welcome to the first ‘This Week in Tokyo’ of February 2020. ‘This Week in Tokyo’ is a review of the Maction Planet week that was and a look ahead to what’s coming up in the city. Check out photos from our tours and read insights into our explorations as we get under the skin of the World’s Greatest Metropolis, and beyond. This week’s edition is hosted by Mac, our Founder and Lead Guide. This week: Quiltastic; Setsubun 2020; Brooks Bourbon Bottlekeep and Jazz; Tokyo Flight Path changes and Kawagoe snapshots featuring Tokimo and Mouse!

Header and Featured images  – Quiltastic: The 19th Tokyo International Great Quilt Festival, held from 23-28 January 2020, was another incredible showcase of  textile artisanry. Here are close-ups of two of my favourites: ‘What I Dream Tomorrow’ by Eiko Okano (Header image) and ‘Fujin・Raijin – Wing God and Thunder God’ by Yoko Sekita (Featured image). 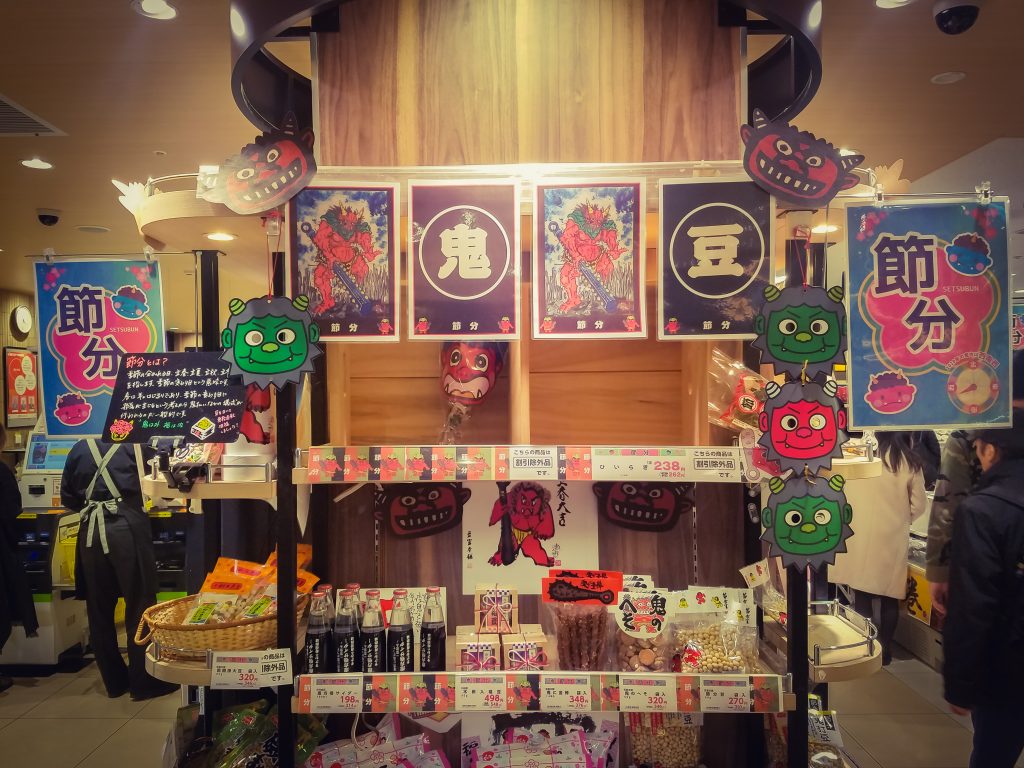 Setsubun 2020: Setsubun (節分) is the day before the beginning of spring in Japan and is celebrated annually on 3 February as part of the Spring Festival. In the past it was thought of as a sort of New Year’s Eve (much more than is is now). The new year was considered a time when the spirit world and the physical world came close together. A special ritual called mamemaki (豆撒き) is performed to cleanse away all the evil of the former year and to drive away any wandering spirits that might happen too close to one’s home. This involved the throwing of roasted beans around one’s house. As you can see from this photo of bare shelves at the Tokyu Store in Nakameguro, people really embrace our traditions here. To find out more about Setusbun, read our ‘Ode to Setsubun‘ and watch videos of Setsubun 2019 at Hie Jinja and Suitengu. 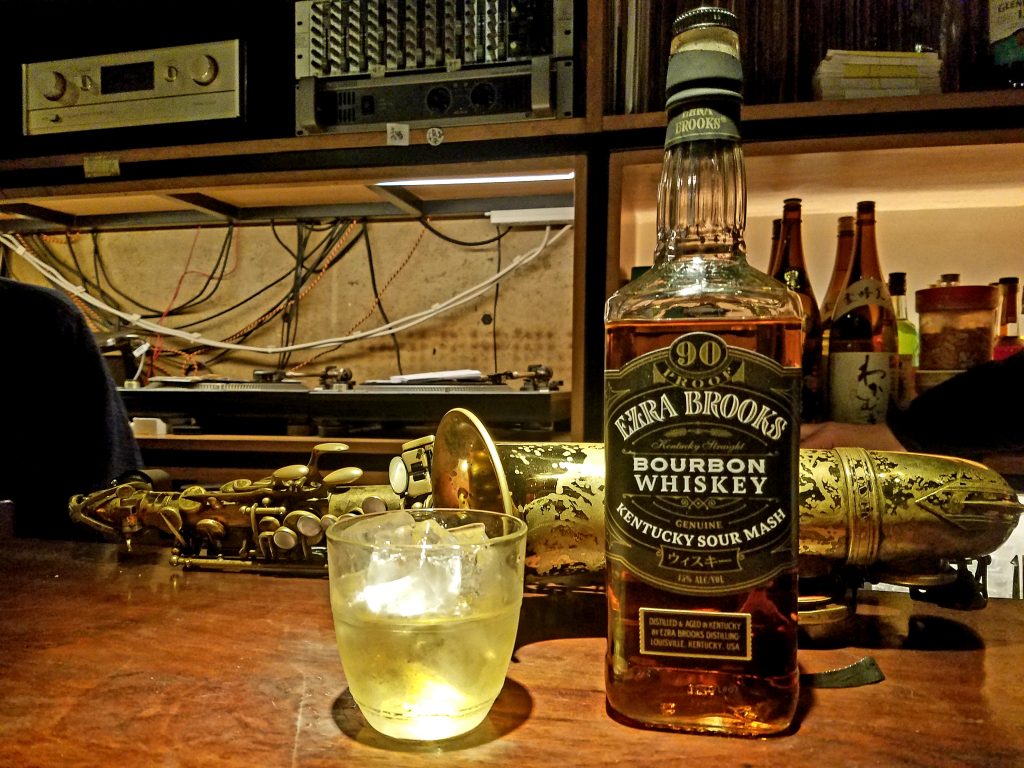 Brookes Bourbon Bottlekeep and Jazz: Maction Planet Tokyo Private Tour guests who tour with me personally in the evening/night can access my bottlekeep collection across Tokyo. What is a bottlekeep? It is a service which is provided at some bars and restaurants where guests can purchase a bottle of liquor and have the unfinished portion stored until a later visit. It’s the ultimate sign that you are a regular. Want to feel like you are truly a local in Tokyo? Join us! 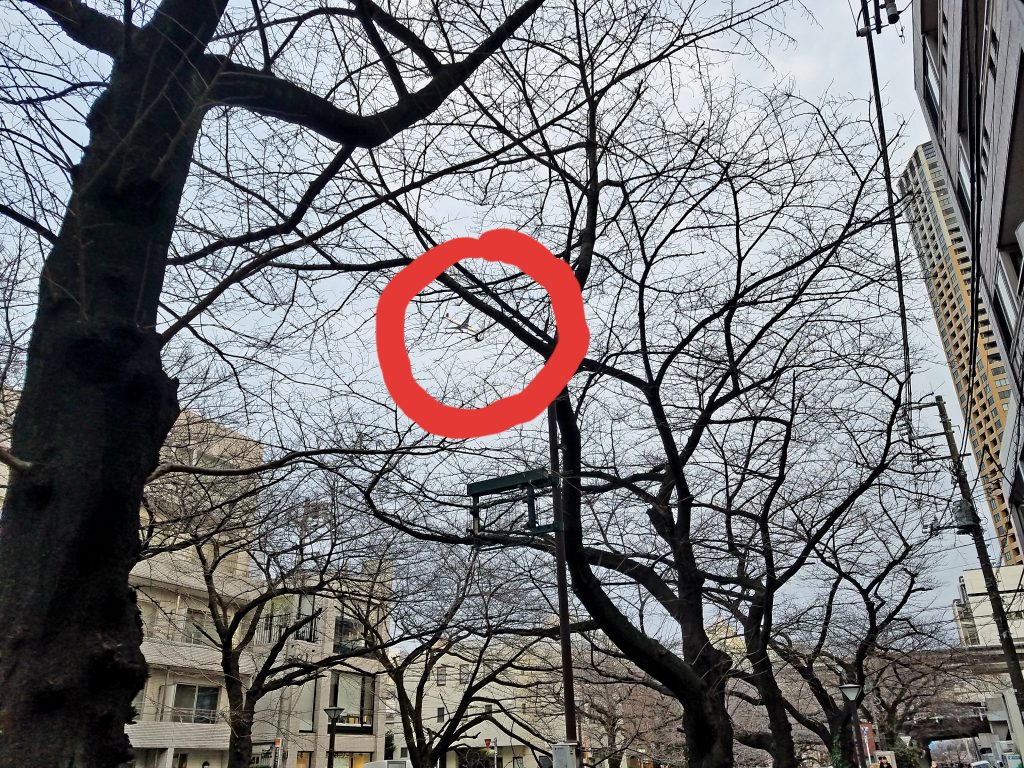 Tokyo Flight Path changes: My guests and I were strolling along the Meguro Canal when, through the banks of Cherry Trees, we spotted this low-altitude Japan Airlines plane flying over central Tokyo. These planes are testing out conditions for the new routes into Haneda Airport that are set to be used from 29 March 2020. The changes will reduce inefficiency and allow the number of international flights operating from Haneda Airport to be increased, from up to 60,000 to 99,000 per year, excluding early morning and late night hours. The aircraft will be flying at an altitude of some 1,000 metres near Shinjuku, about 700 metres near Shibuya, and roughly 300 metres near Oimachi and use of the new routes will be limited to between 15:00 and 19:00. Currently, landing paths for Haneda pass over Tokyo Bay. Flights arriving from the west and south typically pass over Izu Oshima island before making a final approach over the Boso Peninsula, while flights from the north, including international flights from Europe, need to take a detour and fly to the Boso Peninsula before making final approaches from Tokyo Bay. Haneda is Asia’s second-busiest airport after Beijing International, but the air routes surrounding Haneda have become known as tough to fly and challenging for pilots. Their complexity is partially driven by the need to avoid flying over central Tokyo, and out of consideration for the U.S. military — which until the new routes’ introduction will have enjoyed exclusive access to certain air space over western Tokyo (the so-called Yokota Air Space). Until Tokyo and Washington reached an agreement in January 2019, some west-bound civilian flights were unable to fly through the air zone at all. Currently they have to make a steep ascent after departing from Haneda to avoid U.S.-controlled altitudes within the air space, but with the new routes that will no longer be necessary. 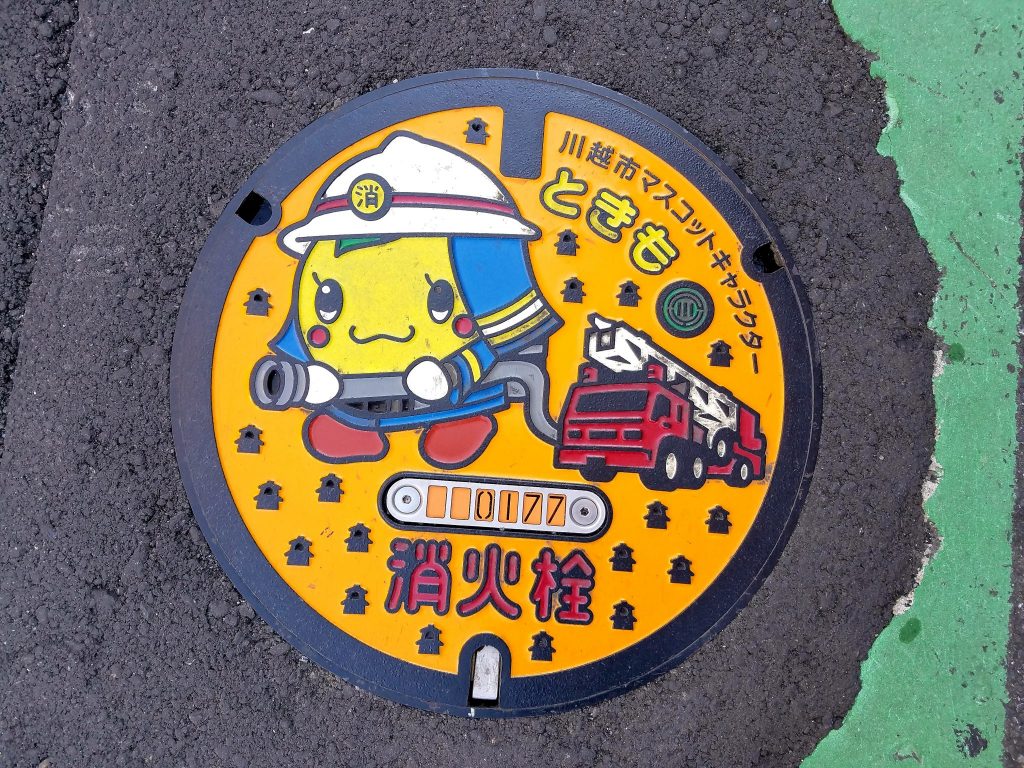 Kawagoe snapshots featuring Tokimo and Mouse: It is always a pleasure guiding our guests in the beautiful city of Kawagoe, which makes a great day trip from Tokyo. Above and below are two of my favourite shots from the day. The manhole cover above features Tokimo, Kawagoe city’s mascot. ‘TokiMO’, the symbol of Kawagoe, is a mascot born from the “TOKI-no-kane (famous Kawagoe Bell Tower)” and Kawagoe’s specialty product sweet potatoe, or iMO. Hence the name TOKIMO. It is a Beni-aka sweet potato with the Toki-no-kane Bell Tower on its head. In this case, the Bell Tower is hidden by the helmet.  Tokimo’s birthday is 13 October (Sweet potato day). It’s special skills are making potato stamps with its own body (?) and increasing its number of friends one after another. [There is a Japanese pun here – 芋づる式, means “one after another” but the kanji 芋 also means potato] Tokimo’s hobbies are Taking exams, working in the fields and its favourite foods are Baked sweet potatoes, B class gourmet.  Tokimo’s favourite quote is “九里よりうまい十三里”, “A friend of a friend is everyone’s friend” and its favourite motto is Time is money（時は鐘鳴り）. I can assure you I am not making this up!

Below is the scene on Saturday 1 February at the Kawagoe Kumano Shrine with a giant ema marking the year of the mouse! 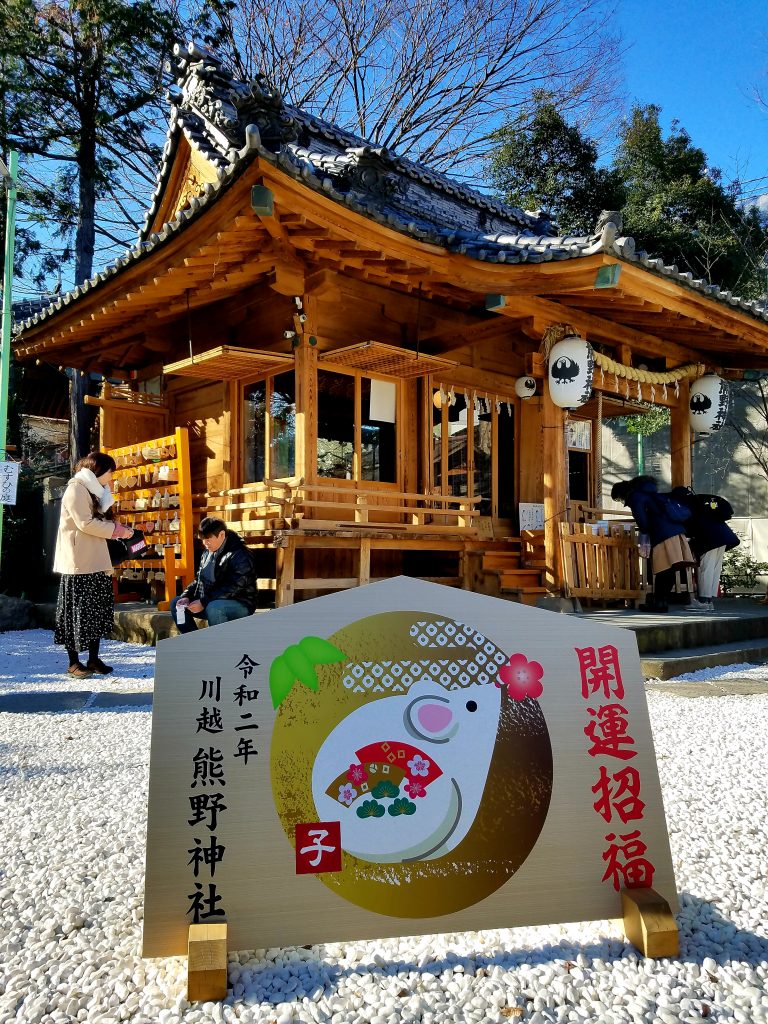