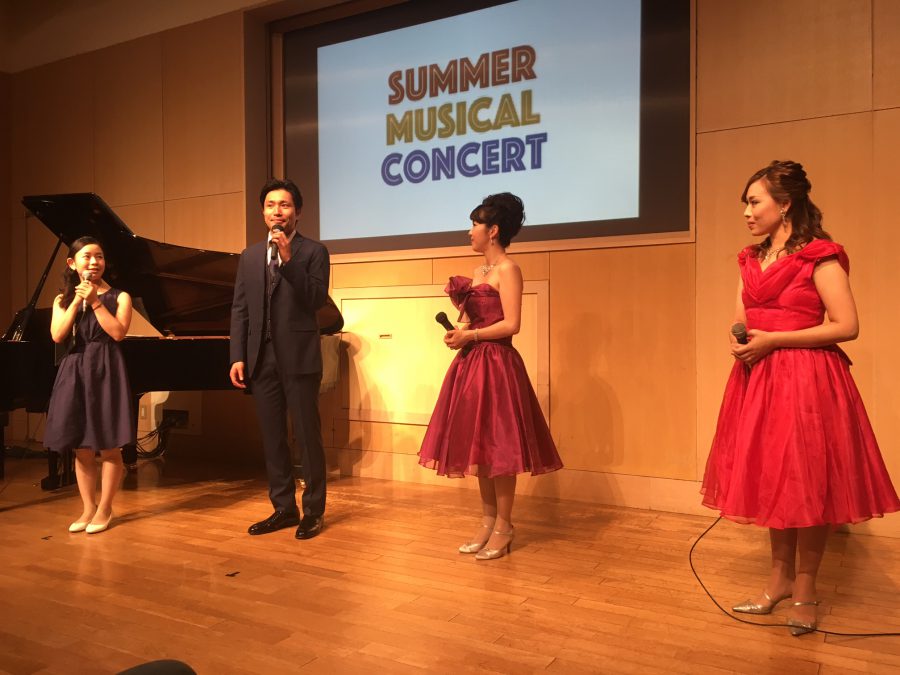 What the Tokyo Locals Do: Summer Musical Concert

“We want to experience this place like locals!” is a sentiment commonly expressed by visitors to pretty much everywhere. The desire to feel less of a tourist and more at one with the resident population has been something I suspect all travelers have been attempting since the dawn of tourism, and it has certainly become an overarching trend in more recent years.

Guests on Maction Planet’s Tokyo Private Tours already know that the side of Tokyo that they see will be very different from that in the guidebooks. They will be visiting local bars, ramen joints, sushi restaurants, boutique shops and undervisited-yet-amazing neighbourhoods, gardens and shrines which make up The World’s Greatest Metropolis. Unlike many other tour companies in Tokyo, we are not on commission from any bars and restaurants, and every single itinerary we have run has been different. You will be looking at Tokyo through a truly local lens. We even guarantee, on some of our itineraries, that you will not see any other tour groups going to the places we go.

Some visitors want to do even more of a deep dive – they want to understand what real local life is truly like. Banks, local sento baths, seeing inside old Japanese houses, learning cooking and drinking homemade umeshu plum wine. We’ve arrange tours like these too!

Many guests ask me, “What would you be doing today if you were not guiding us around Tokyo?” The answer is often similar to what we are actually doing when they ask the question! I would be exploring one of the latest art exhibitions, coming to chill at my favorite Japanese garden, sampling the latest seasonal craft beers at one of the new bar openings or beer events, or enjoying one of Tokyo’s many summer festivals or fireworks displays.

We have written before about a few of our days off – a chance encounter with Pieter Bruegel the Elder’s “Big Fish Eat Little Fish”, some Hydrangea Mania, a trip to karaoke after watching Doctor Strange… these posts have proven to be very popular and we have had a lot of incoming emails and questions off the back of them. So, in response to that, and at the suggestion of many of our guests, this post is intended to be the first in a semi-regular series where we give some insight into what we are doing when we are not helping our guests experience The World’s Greatest Metropolis.

Last Sunday, the Maction Planet team had a day off after ten days straight of guests, with another full week of tours starting on Monday. I set aside the afternoon to respond to some new tour requests, plan for the next week and write some new blog posts.

However, I was able to begin the day in less administrative fashion. I walked to Nakameguro to watch a Summer Musical Concert at the Nakameguro GT Plaza Hall. The audience waited outside the hall until doors opened at 10:10am, when they were called in according to how early they had purchased their tickets. Twenty minutes later, the concert began.

The concert was headlined by ‘Manon’, a duo composed of singers Minami Asai and Ayako Hara.

Minami studied opera at the Kunitachi College of Music. After university, she entered the prolific Shiki Theater Company, which was founded in 1953 and holds 3000 performances a year across 8 theatres in Japan. She has starred in such well-known shows as The Sound of Music, Beauty and The Beast, The Little Mermaid, and Song and Dance. 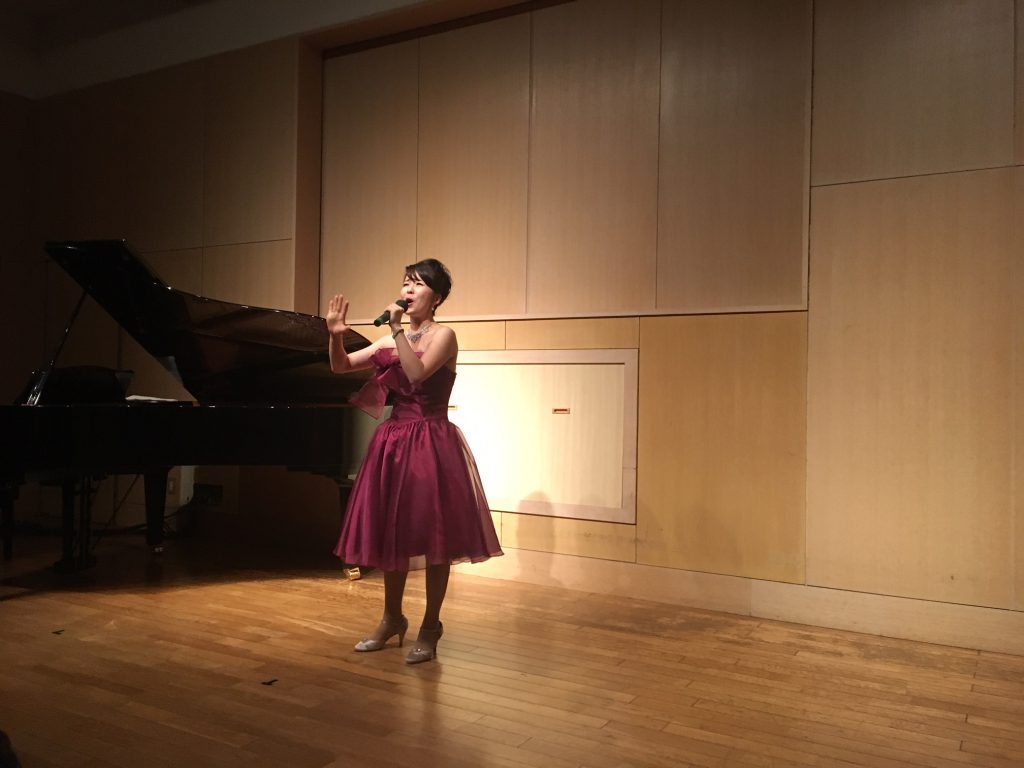 Ayako Hara, one half of Manon

Ayako graduated from Sophia University with an English degree. While at university she performed at the Tokyo International Forum in a production of Anne of Green Gables in the role of the main protagonist, Anne. She also entered the Shiki Theater Company and has starred in productions of The Sound of Music, Jesus Christ Superstar and Wicked, in which she played Fannie.

Manon was formed after they left the Shiki Theatre Company.

Joining them for this concert were guest vocalist Tomohiko Nakai and pianist Yurino Tominaga.

Tomohiko Nakai was also in the Shiki Theater Company. Following his first role in Les Miserables in 2007 he played Raoul in Phantom of the Opera, the Beast in Beauty and the Beast and Alex in Aspects of Love. After he left the company, he wrote, produced and performed in a one-man musical show called “The World of Chuya Nakahara”, tackling the life of the Showa-era poet. He was part of Sarah Brightman’s Japan tour, which I went to see with guests. He has also released two CDs and a book. 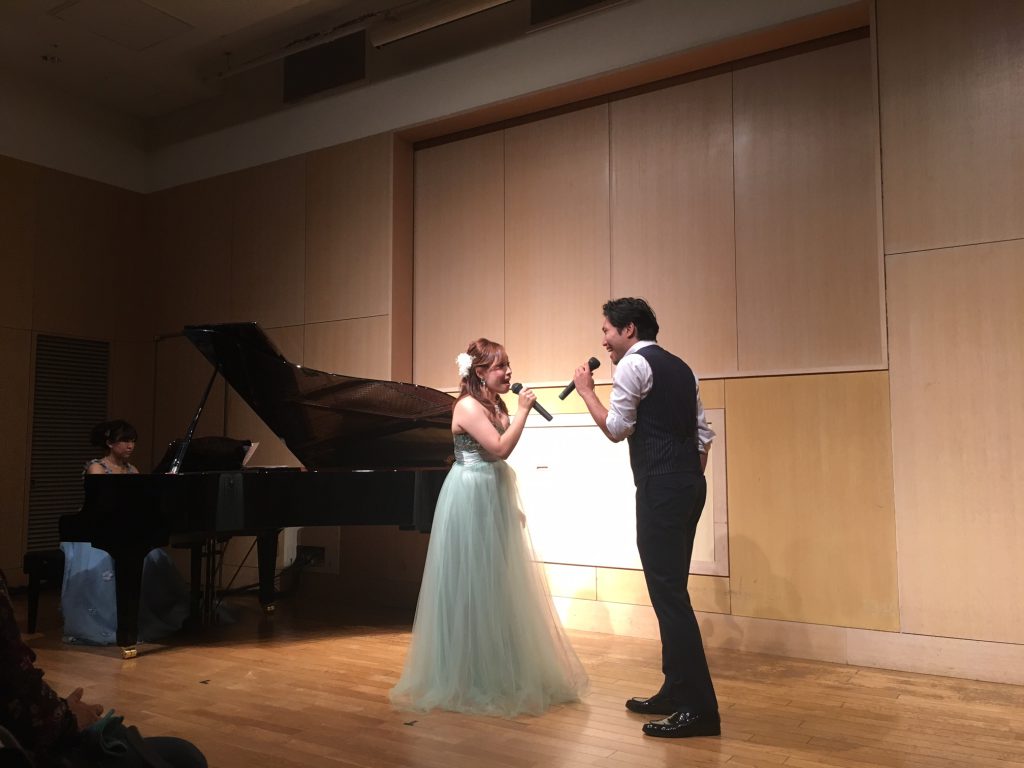 Together the vocalists performed an amazing line-up of songs (listed below), primarily from Disney animation. Most of the songs were performed in Japanese, with the exception of the climax, Seasons of Love, where the backstage screen parted to reveal the English lyrics with a translation, and the audience were invited to sing along.

The pianist Yurino Tominaga was absolutely incredible, showcasing her amazing talent throughout, especially in the Disney Medley and the arrangement of Twinkle Twinkle. Yurino studied Piano and Piano Instruction at the Kunitachi College of Music. She has a Masters in Piano from Nihon University, and is now active as a piano and chorus instructor for both adults and children, as well as performing at weddings and other events.

The whole production was very professional, even down to having a professional announcer, Airi Kikuyama. She is another graduate of Sophia University, and we found out during one of the ‘talk show’ segments, which are a staple of concerts here, that this is where she met Ayako. She studied in the German faculty, but went on to work as a broadcaster at NHK Fukushima and Nagoya. She is now working as a freelance announcer and MC doing shows such NHK’s Chorus Concerts, and this one!

The event was expertly organised by Real Stage LLC. If you ever visit their office, it is next to the Konno Hachimangu Shrine in Shibuya. As well as being a peaceful local Tokyo shrine, especially beautiful during cherry blossom season, as an added bonus you can see an a surviving piece of the fortifications of Shibuya Castle!

The next time Manon will be performing will be on 23 September at 14:00 in Akasaka, where they are part of a Road Traffic Safety event.

A delightful, truly local start to another Sunday in The World’s Greatest Metropolis.

Maction Planet runs Tokyo Music Tours, which we brand “Maction Planet Radio Tours”, introducing people to the varied and diverse range of music in The World’s Greatest Metropolis. Tokyo’s music scene can be difficult to crack for visitors, due to the language barrier and its sheer breadth and depth. Concerts, gigs, club nights across every conceivable genre, homegrown, traditional, modern and internationally-influenced… the variety is outstanding. In most cases there is no English-language information available for these amazing events, and that is where we can help.