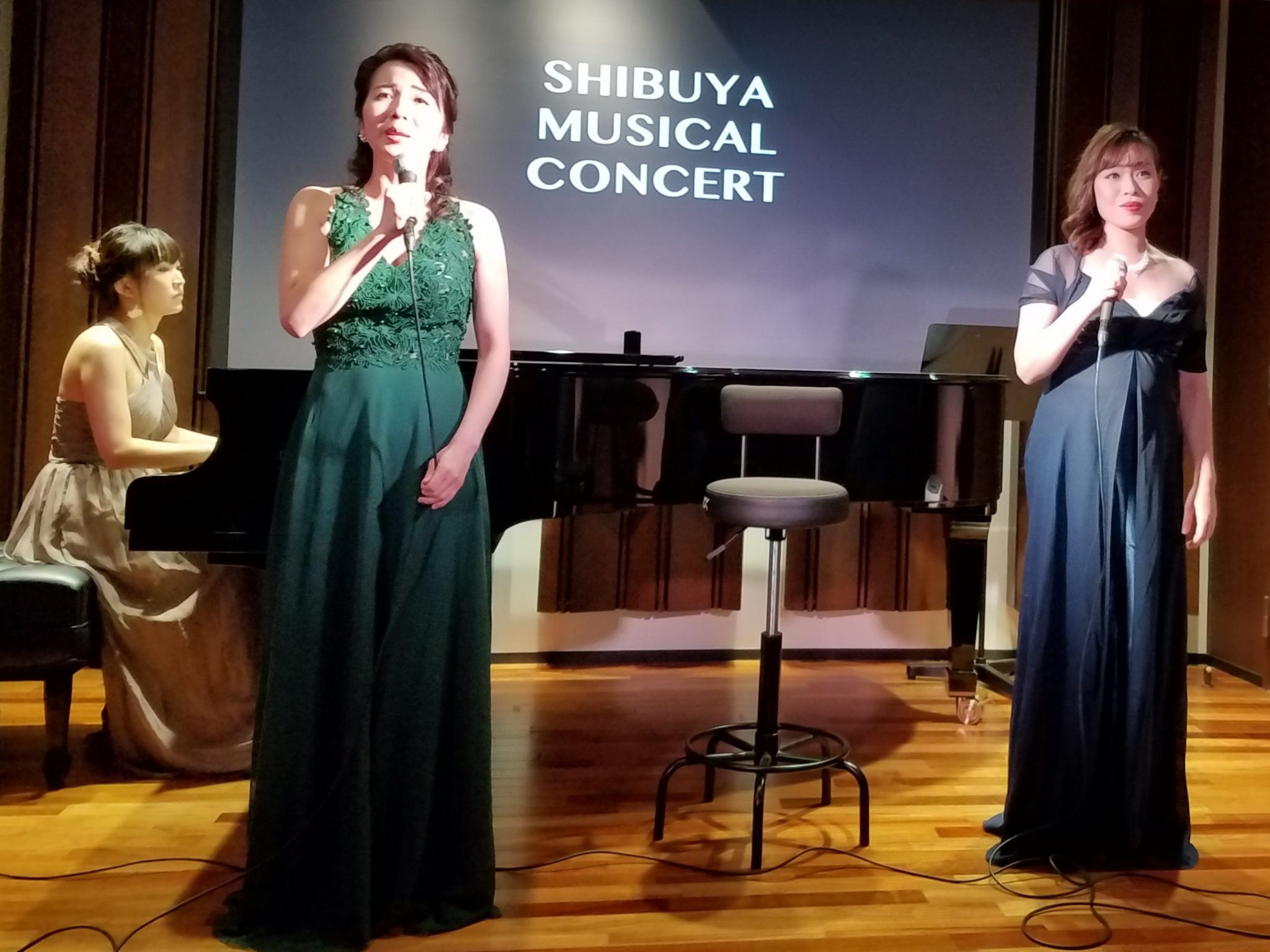 What the Tokyo Locals Do: Shibuya Musical Concert

We began our semi-regular series “What the Tokyo Locals Do” with a feature on a concert performed by Mamon, so it seems appropriate that we now get the opportunity to write about another of their wonderful events – the Shibuya Musical Concert!

On Monday 24 February I headed to Shibuya Hall to watch the ‘Shibuya Musical Concert’ headlined by ‘Manon’, a duo composed of singers Minami Asai and Ayako Hara.

Minami studied opera at the Kunitachi College of Music. After university, she entered the prolific Shiki Theater Company, which was founded in 1953 and holds 3000 performances a year across 8 theatres in Japan. She has starred in such well-known shows as The Sound of Music, Beauty and The Beast, Song and Dance, Phantom of the Opera (as Carlotta), and The Little Mermaid (as Andrina). She teaches at Suganami Gakki Music Salon.

Ayako graduated from Sophia University with an English degree. While at university she performed at the Tokyo International Forum in a production of Anne of Green Gables in the role of the main protagonist, Anne. She also entered the Shiki Theater Company and has starred in productions of The Sound of Music, Jesus Christ Superstar and Wicked, in which she played Fannie. Currently, she teaches on the online music website ‘Cafetalk’. She also works as a chorus leader and conducts voice training.

Manon was formed after they left the Shiki Theatre Company. 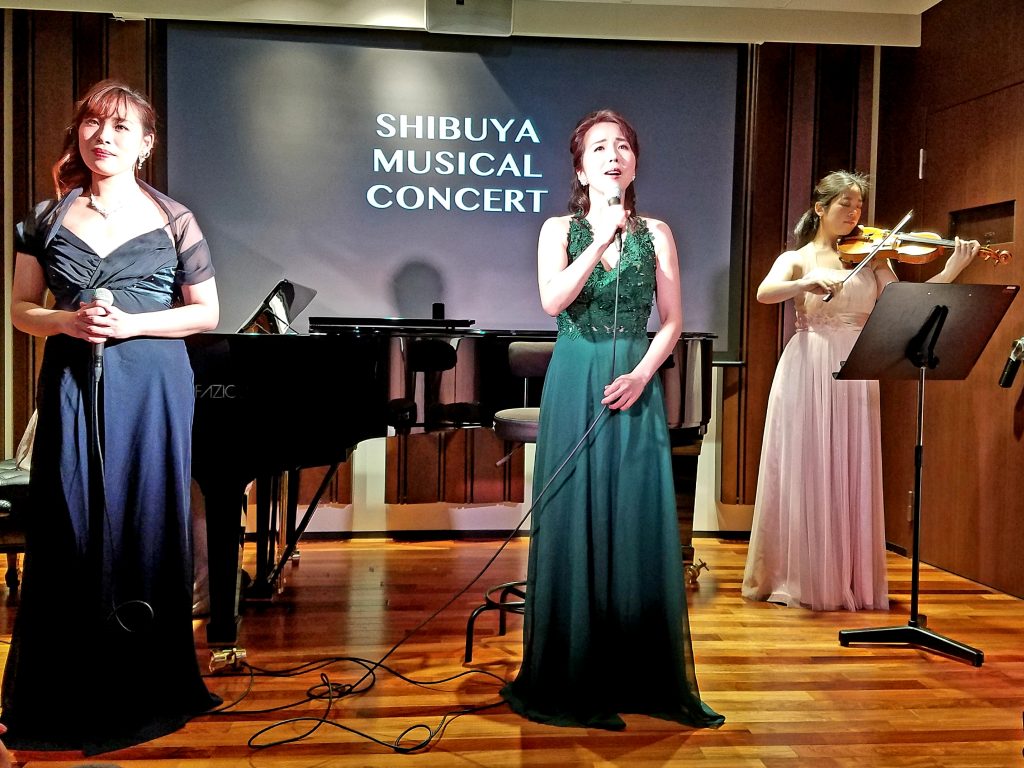 Together the vocalists performed this amazing line-up of songs:

Joining them for this Shibuya Musical Concert were violinist Natsuno Takeshige and pianist Yurino Tominaga. 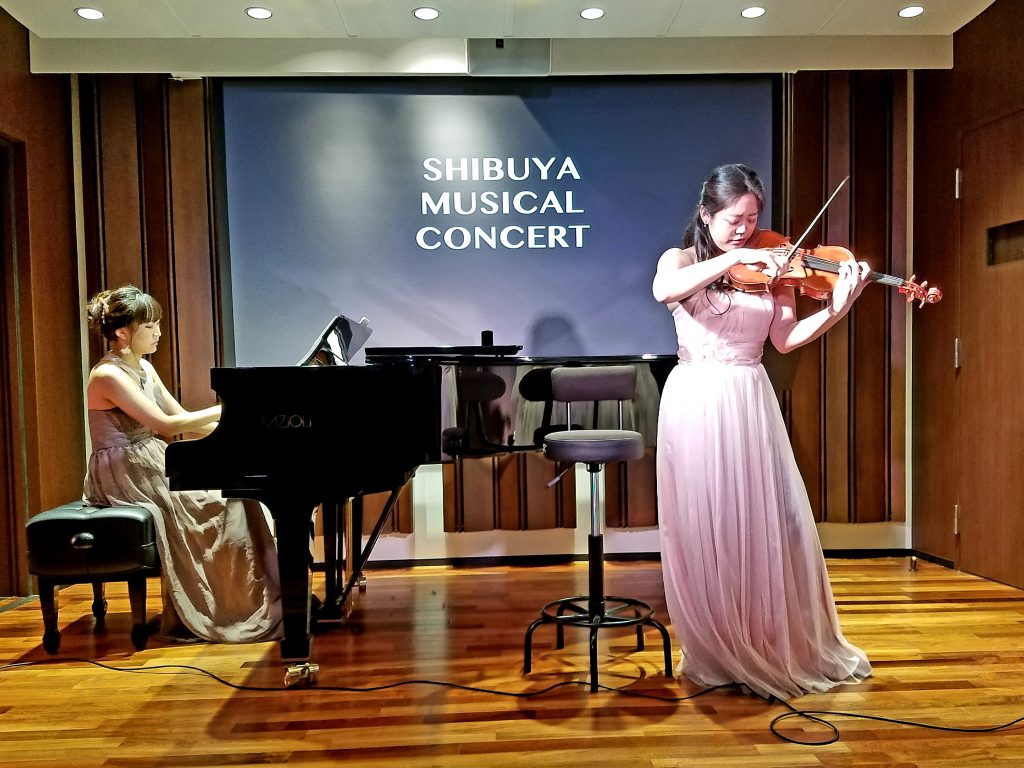 The pianist Yurino Tomonaga was absolutely incredible, showcasing her amazing talent throughout. Yurino has a teaching degree from the Kunitachi College of Music. She has a Masters in Piano from Nihon University, and is now active as a piano and choral instructor for both adults and children, as well as performing at weddings and other events. She is also involved in music therapy, is a composer and also works as an instructor for Cafetalk. In winter 2019, she released a compilation CD title ‘Nostalgia’ with two other musicians.

Natsuno Takeshige started violin when she was 4 years old while living in Boston. She attended the Tokyo College of Music and obtained her Masters. While studying there she received a scholarship to study abroad in Austria at the Mozarteum University International Summer Academy and obtained a diploma. She completed a masterclass with Austrian violinist Karin Adam at the Kusatsu International Summer Music Academy, and has studied under a number of other accomplished musicians. She is one of the part-time staff at Senzoku Gakuen College of Music and also teaches violin at Kurosawa Music School.

Many young children also attended and it was truly inspiring to see them singing along and so enthralled by all the spectacular performances!

The Shibuya Musical Concert was expertly organised by Ayako and Real Stage LLC. If you ever visit their office, it is next to the Konno Hachimangu Shrine in Shibuya. As well as being a peaceful local Tokyo shrine, especially beautiful during cherry blossom season, as an added bonus you can see an a surviving piece of the fortifications of Shibuya Castle!

A delightful, truly local start to another Monday in The World’s Greatest Metropolis.

Maction Planet runs Tokyo Music Tours, which we brand “Maction Planet Radio Tours”, introducing people to the varied and diverse range of music in The World’s Greatest Metropolis. Tokyo’s music scene can be difficult to crack for visitors, due to the language barrier and its sheer breadth and depth. Concerts, gigs, club nights across every conceivable genre, homegrown, traditional, modern and internationally-influenced… the variety is outstanding. In most cases there is no English-language information available for these amazing events, and that is where we can help.