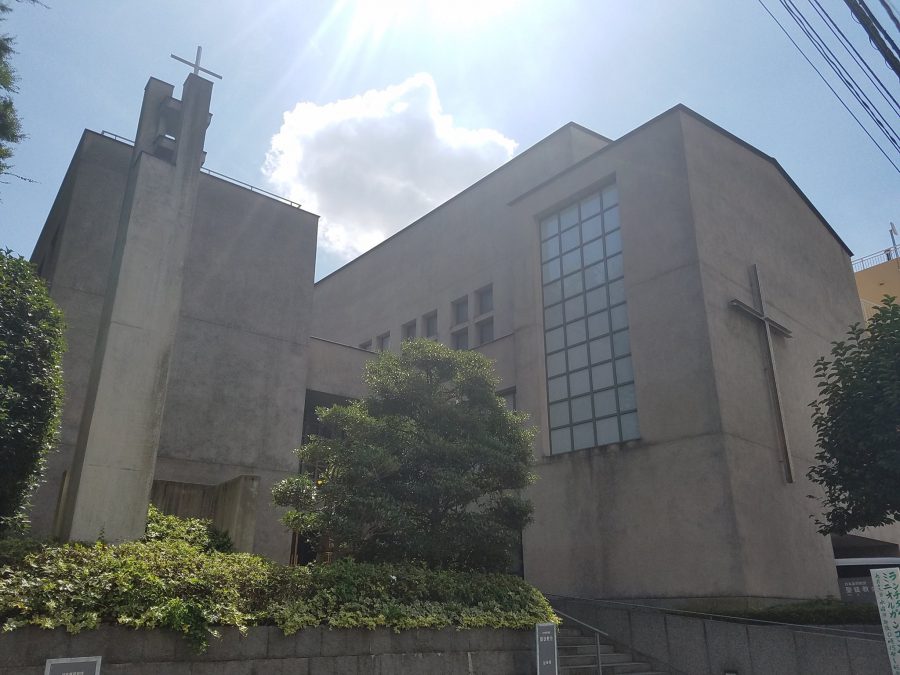 What the Tokyo Locals Do: Lunchtime Organ Concert

It’s been a busy time on Maction Planet recently, and we love that. Thank you to all our guests for keeping us on our feet, literally! But when downtime occurs, Tokyo always has something to help you take some time out. Mac describes one such event – a Lunchtime Organ Concert at Seito Kyokai in Ebisu.

Today I am working out of Maction Planet HQ in Ebisu. Tonight I am leading a Baseball Tour which coincides with one of the season’s half-price beer nights at Jingu Stadium. Beforehand the guests will be sampling the delights of Tokyo’s burger scene which truly features some of the best on the planet, and afterwards we will be heading to explore some of the city’s top craft beer bars.

This has left me the day to respond to some tour requests, including one for after the next Tokyo Marathon in February 2018, liaise with some designers who want to work with Maction Planet Apparel, and put the finishing touches to a new premium tour activity which we are extremely excited to soon be offering (Hint: Think Masumune + one of Japan’s Ancient Capitals).

Lunchtime beckoned, and after a nice Sirloin Steak at Madison, I headed to Seito Kyokai – All-Saints Church in Ebisu – to listen to one of their Lunchtime Organ Concerts. 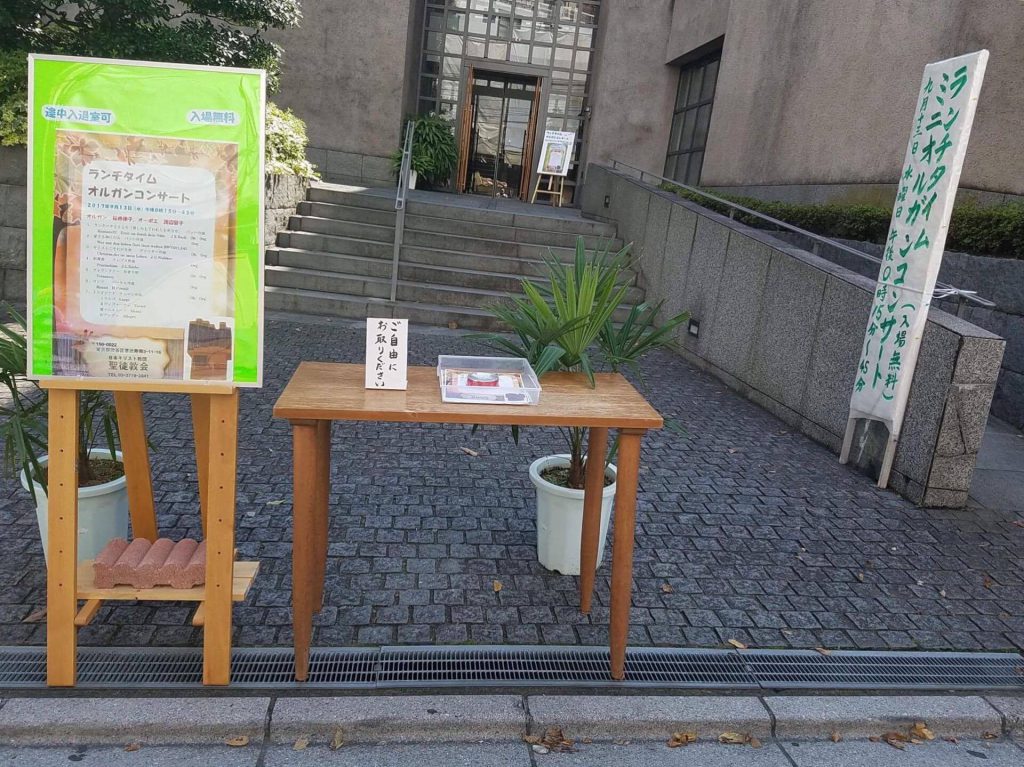 Seito Kyokai belongs to Nippon Kirisuto Kyodan – the United Church of Christ in Japan (UCCJ). The UCCJ has an interesting history. It was created by the merger of 33 Protestant denominations, in-part due to calls for greater unity between churches, and in-part forced on them by the Government’s Religious Organisations Law in June 1941.

Their church in Ebisuminami, Seito Kyokai, the All-Saints Church, is a beautiful modern building in which they hold 30 minutes organ concerts most Wednesdays, starting at 12:15pm.

I headed inside five minutes before the concert began, and was met with a program and a pen which the staff insisted I take! 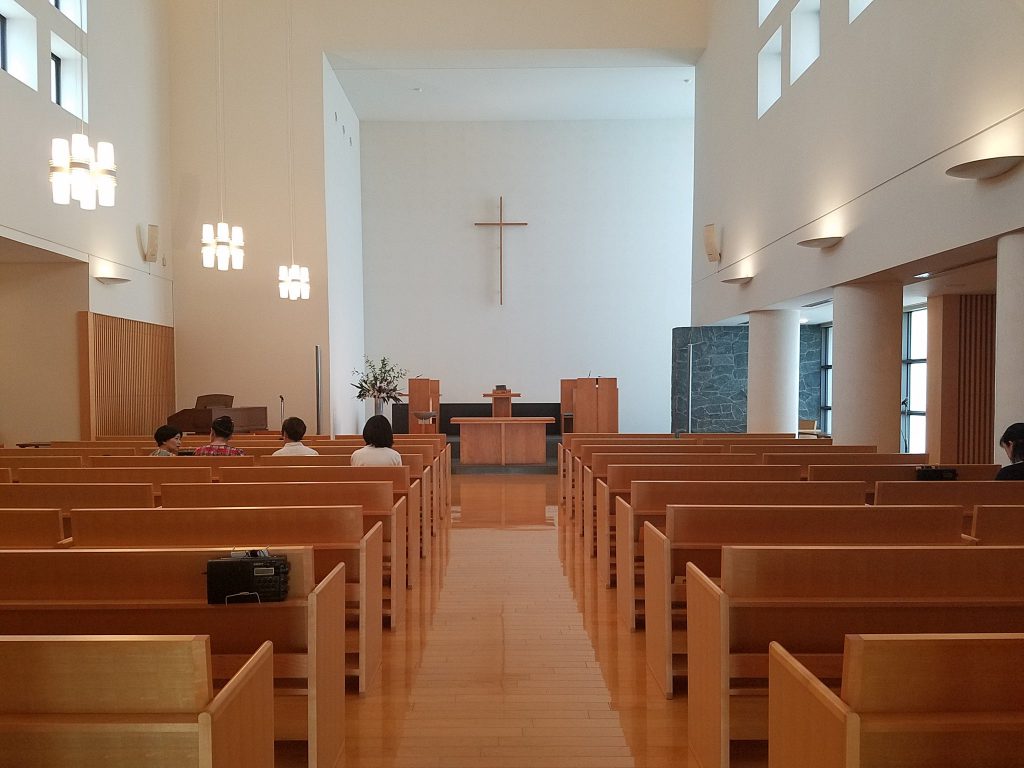 The interior’s clean geometry helps calm the mind, and I sat and collected my thoughts.

Soon, the music began. I looked up to see the performers on the balcony. The concert was given by Ritsuko Matsui on Organ and Satoko Watanabe on Oboe. They worked their way through some of the classics of Organ music with pieces by Bach, Walther, Krebs and Teleman. Here’s the full program: 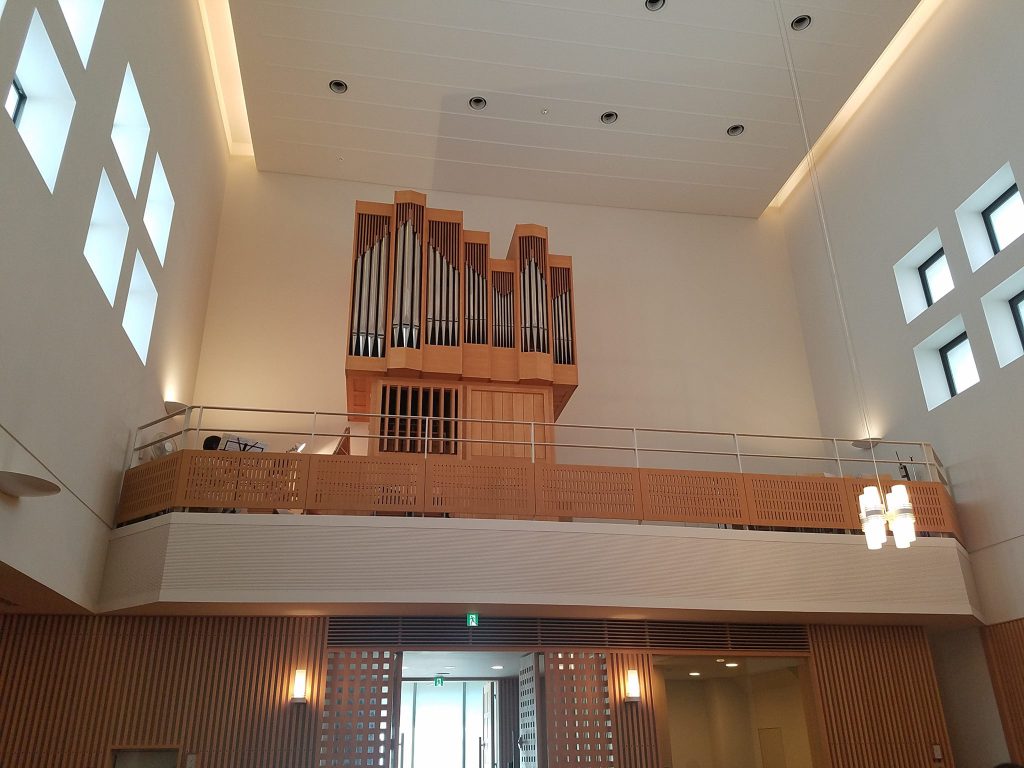 15 people attended, and the enthusiastic applause at the end of it suggested all thoroughly enjoyed themselves. I was the only non-Japanese audience member. After the performance, the musicians waited by the exit of the hall to greet and thank attendees. The Pastor was also present, and we had a nice chat about the local area. He even took a Maction Planet business card, as he has guests coming from overseas in October.

After that it was straight to the local Hair Salon for a quick trim, back to the office to write this post, then off to meet our guests. Wishing everyone an equally productive day in The World’s Greatest Metropolis, and beyond!

One of our goals at Maction Planet is to bring truly local experiences to visitors to Tokyo. Previous guests have described us as “reinventing custom travel” in The World’s Greatest Metropolis. Read our TripAdvisor reviews to see what they had to say about us, then drop us a line. Whatever your interests in Tokyo, contact us at info@mactionplanet.com!