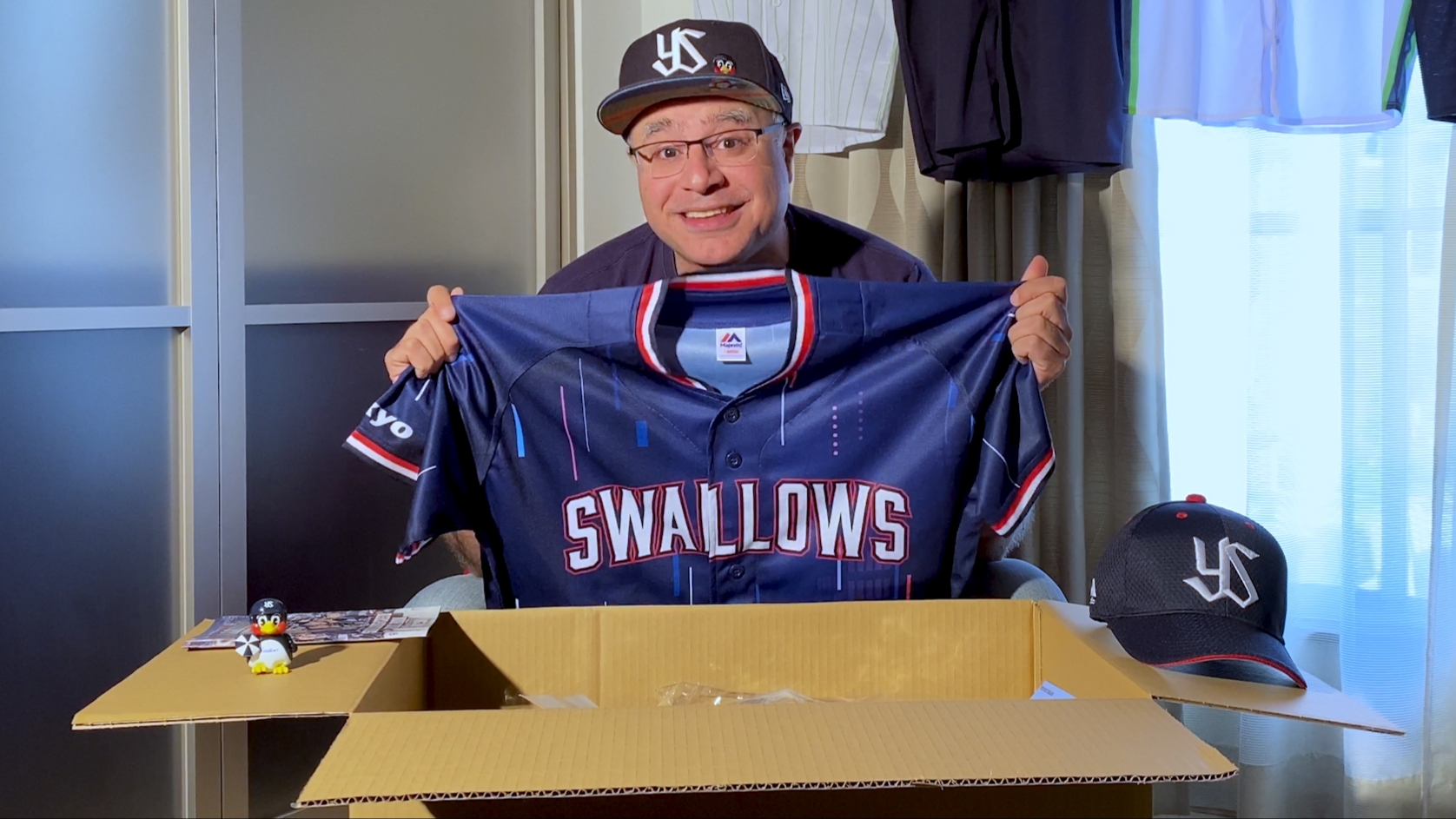 Gearing up to the 2020 Japanese Baseball season starting on 20 March, Mac, Founder and Lead Guide of Maction Planet, answers one of Tokyo’s most burning questions… Ever wondered what Tokyo Yakult Swallows merchandise was in the box that ‘Swallows Crew’ Platinum Crew Members received in 2020? Regardless, the answer can now be revealed!

The Swallows Crew is the current incarnation of the fan club of the Tokyo Yakult Swallows. Born in 2013, the Swallows Crew has various tiers of membership, the highest being the Platinum Crew (introduced in 2015). As Mac is a sucker for anything the team does – win, lose or draw – he has of course been a Platinum member since inception.

It is a well known fact of the modern age that when one receives a box with goods in it, one has no choice but to record the unboxing of said goods and share the video with the world on YouTube. It was a fateful day for humanity when Mac found out about this phenomenon, all while the Swallows Crew Platinum Crew 2017 membership goods box was sitting around the Maction Planet office. It had been delivered at the turn of the year, but the intense work leading up to our website launch on 20 February 2017 meant it lay there, unopened.

We racked our brains for a suitable topic for an unboxing video – Disney, Kinder eggs and smartphones seemed overdone – finally realising that the answer was staring us in the face! That’s right – TOKYO YAKULT SWALLOWS MERCHANDISE! It seemed to fit all the criteria for success – a well-known international brand name, one of the most successful sports franchises of all time, an underserviced market, zero competition, highly profitable. Surely with a mascot as lovable as Tsubakuro there would be no stopping us in our inexorable march to top the YouTube rankings.

We made the first video in 2017 and in the intervening three years it has received over 400 views.

Videos in 2018 and 2019 followed, each one increasing in production values and ennui.

A CNN article from 2014 describes unboxing videos as “a lucrative little corner of the Internet for the people who film them”. We can vouch for this as we roll around in the $1.10 (as of today) we have made IN TOTAL in YouTube advertising revenue from the previous three Tokyo Yakult Swallows merchandise unboxing videos.

However, one huge change in the year since the previous unboxing video has been the (exactly) tenfold growth of our YouTube subscriber base, from 261 to 2610. Thank you from the bottom of our hearts for all the support. Please subscribe if you are reading this and you haven’t already! It means the world to us.

With this validation in hand, Mac returns in 2020 to take more Tokyo Yakult Swallows merchandise out of a box, because no one demanded it. If you want to know what merch the highest level of Swallows fan gets access to, or are just looking to while away some precious time, this video is for you. Sit back, relax and… errr… ‘enjoy’.

Let’s hope that this 2020 season is much more successful for the Tokyo Yakult Swallows than the previous one.

BTW, If you think that this video is any way ‘paid content’ or endorsed by the Tokyo Yakult Swallows, think again!

The 2020 Japan Baseball Season begins on 20 March. Maction Planet runs Tokyo Baseball Tours throughout the Japan Baseball season. Guests have repeatedly told us, and reviewed on TripAdvisor, that a visit to Meiji Jingu Stadium on a Maction Planet Baseball Experience is one of the true highlights of a trip to The World’s Greatest Metropolis. You will not just be watching the game – you will be part of the Swallows community. We even provide all the Tokyo Yakult Swallows merchandise – shirts, cheering devices and more – required to make you look the part of a true fan! When the Swallows are not at home, we have taken guests to home games of the Yomiuri Giants, Yokohama Baystars, Seibu Lions or Chiba Lotte Marines. We also run Tokyo College Baseball Tours, which is an entirely different experience to the professional game!

To book any of our bespoke Private Tours and Experiences in Tokyo, and beyond, contact us at info@mactionplanet.com