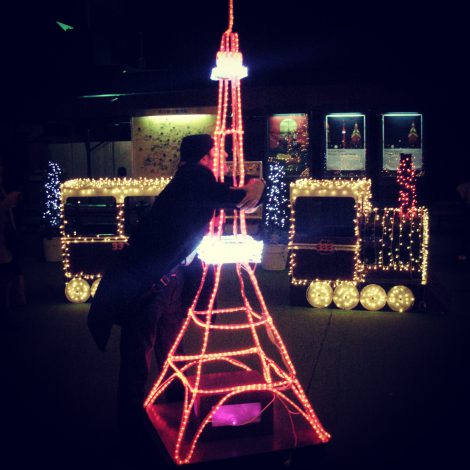 It is TOKYO WEEK at Maction Planet! Mac, Founder of Maction Planet, has taken over the decks for this episode, giving Resident DJ Royce Leong a well-deserved break. Join him as he spins a series of tunes about, set in or important in helping understand the heart and soul of The World Greatest Metropolis, Tokyo. And yes, that is Mac hugging the Tokyo Tower in our featured image, taken back in Christmas 2006!

3 September 1868 was the date an Imperial Proclamation changed the name of Edo to TOKYO. We’ve been having a week-long celebration on the Maction Planet Blog with articles, interviews and even a T-shirt launch all related to the history and fabric of the city. Maction Planet Radio clearly needed to get in on the action.

Mac has chosen tracks across a variety of genres, from pop and rock to idol music and even Enka! We’ve got songs from Keisuke Kuwata, Capsule and Eikichi Yazawa amongst others.

The episode is dedicated to Toshiyuki Takeo, who passed away suddenly last week. He was 38 years old. Toshi was the heart and soul of the band Strange Stew, one of the great bands which make up the rich fabric of the music scene in Tokyo. Strange Stew were regulars in live houses all over the city. Take-chan will always live on in our hearts and minds through the memories he left and the music he created. We are honoured to be able to play a rare recording of one of Strange Stew’s classics, Hey Möbius, to close out the episode.

Thank you Take-chan for enriching the tapestry of life here in Tokyo. It is people like you that truly make it The World’s Greatest Metropolis.

Maction Planet runs Tokyo Music Tours, which we brand “Maction Planet Radio Tours”, introducing people to the varied and diverse range of music in The World’s Greatest Metropolis. Tokyo’s music scene can be difficult to crack for visitors, due to the language barrier and the sheer breadth and depth of the scene. Concerts, gigs, club nights across every conceivable genre, homegrown, traditional, modern and internationally-influenced… the variety is outstanding. In most cases there is no English-language information available for these amazing events, and that is where we can help.

Whatever your interests in Tokyo, contact us at info@mactionplanet.com