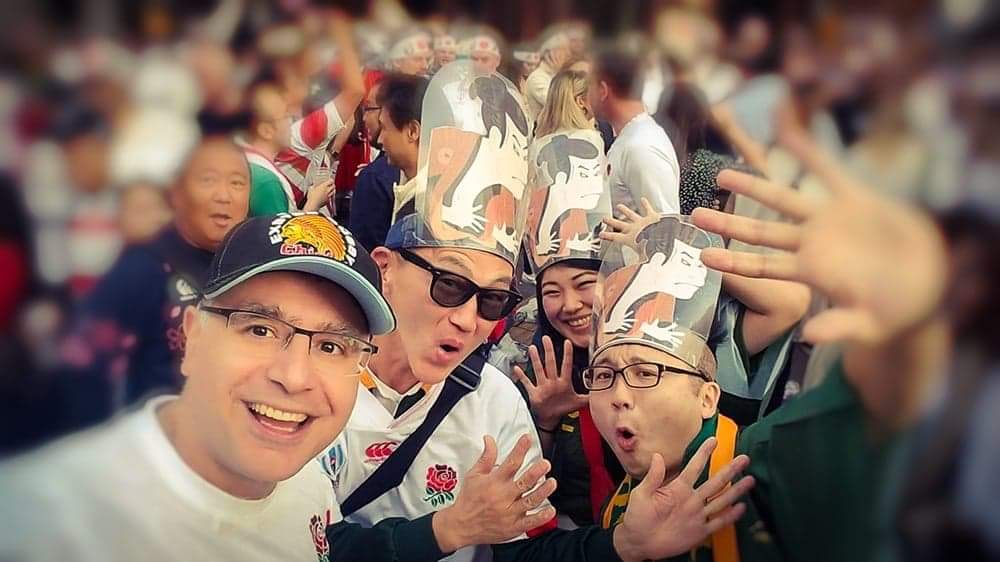 We once again begin the latest edition of This Week in Tokyo with a message of support, love and respect to the victims and those who continue to be seriously affected by the impact of all of Japan’s recent typhoons.

Mac, our Founder and Lead Guide, presents a review of the Maction Planet week that was and a look ahead to what’s coming up in and beyond the city. Check out photos from our tours and read insights into our explorations as we get under the skin of the World’s Greatest Metropolis, and beyond. This week: Kabuki Men at the Rugby World Cup Final; Dogs at the New Zealand vs Wales Bronze Final; 65 years of this guy (Godzilla); Ages 7, 5 and… err… older and The Sun Also Sets.

Featured image – Kabuki Men at the Rugby World Cup Final: One of my favourite photos of the entire Rugby World Cup 2019 tournament. Those who have been following my RWC 2019 journey on the Maction Planet YouTube Channel will know that I have huge love for the ‘Kabuki Shout’ which tends to accompany a restart of the game following scoring. You know it is Kabuki shout time when ‘Ōtani Oniji III in the Role of the Servant Edobei‘ by Toshusai Sharaku appears on the big screen at the games. You can imagine how happy I was when I met these guys on my way to the final, England vs South Africa, in Yokohama on Saturday! Photos were a must, as was video of us doing the Kabuki Shout together. Some of this group were decked out in Springboks colours with the rest in the white of England, and all kabuki shouting together. Truly The World in Union! Congratulations to South Africa on their third Rugby World Cup victory. 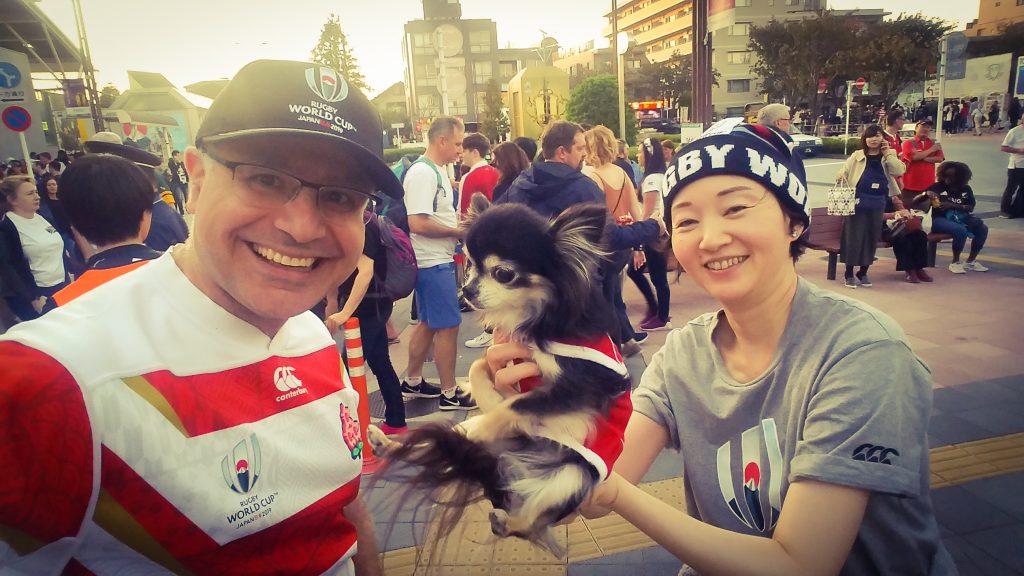 Dogs at the New Zealand vs Wales Bronze Final: Here’s Nui, the cutest animal Rugby fan in the country, who I met on the way to the Bronze Final on Friday. I actually didn’t ask if they would be at the game, or they has just come down to hang out with the fans at Tobitakyu Station Plaza. Either way, Nui and his owner brought joy to the hearts of everyone who met them. 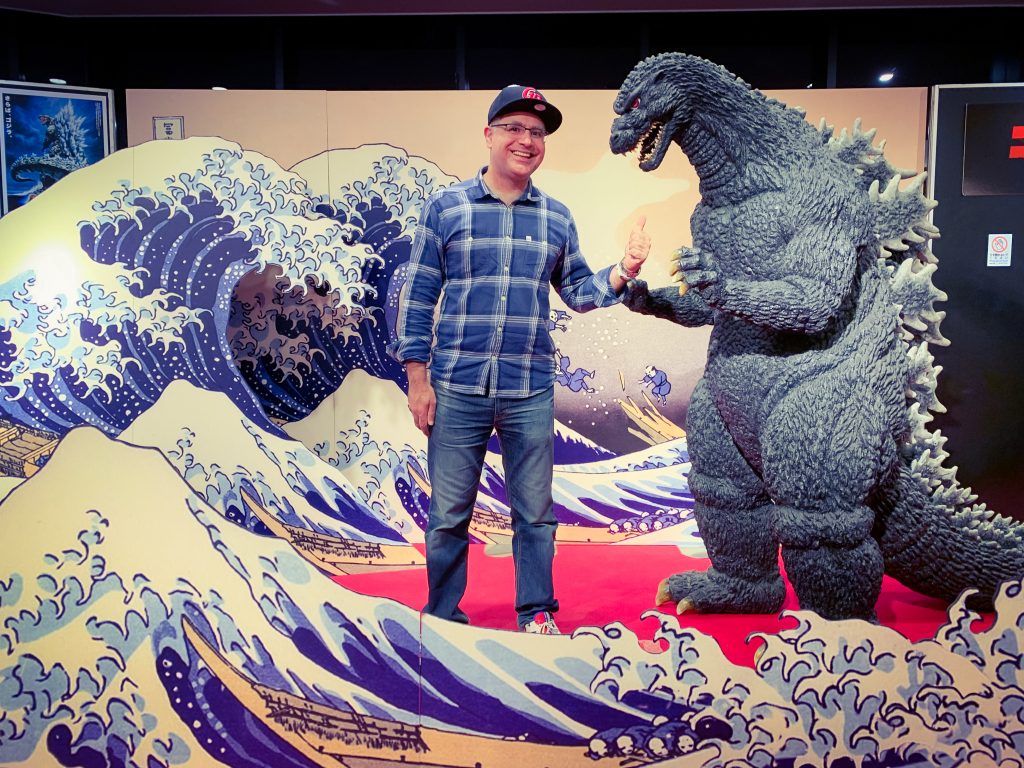 65 years of this guy (Godzilla): On 1 November 1965 the first Godzilla film was released in Nagoya. Two days later it went on general release and 65 years later he is still going strong. It has brought joy to my heart that the last 5 years have seen a revival of interest in everyone’s favourite kaiju, who’s name is a portmanteau of ‘Gorilla’ and ‘Kujira’ (whale). Matt Frank, the Kaiju King, riffed on this when he designed a new kaiju, the Goriwhale, exclusively for Maction Planet, which you can get on a Maction Planet Apparel T-shirt here! 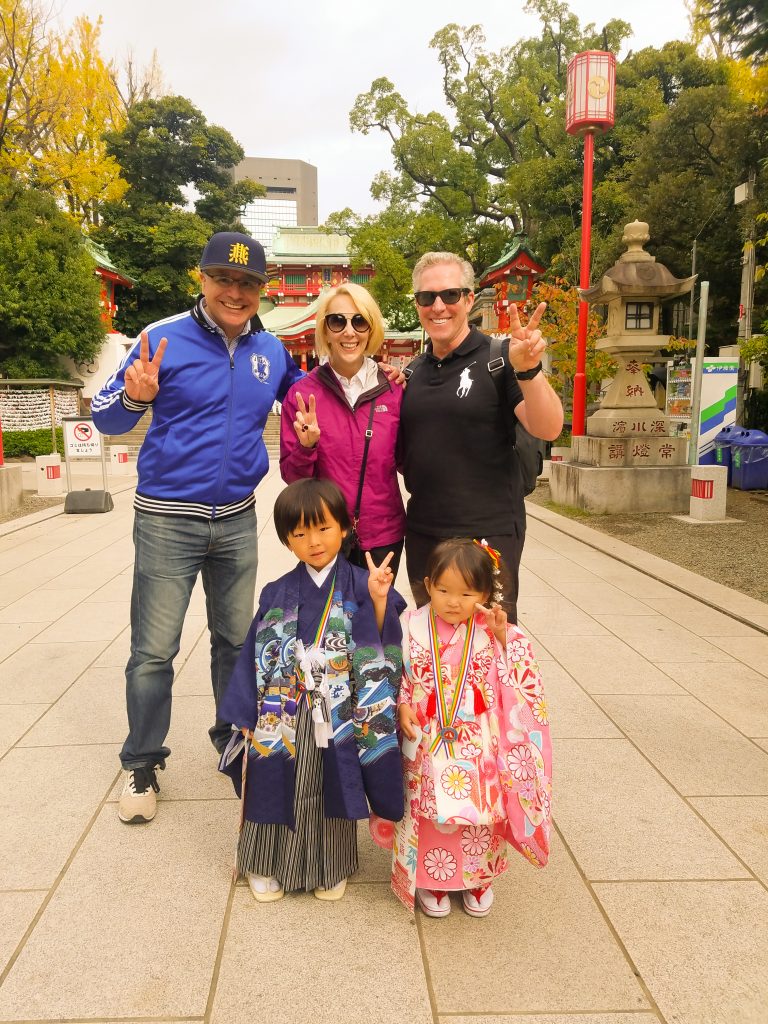 Ages 7, 5 and… err… older: It was an honour to guide Mark and Susan for two days in the World’s Greatest Metropolis. We bumped in Ichiro and Aiko having their Shichigosan and their parents asked if they could have their photo with us! Cameras were passed around and fun ensued. It was an honour to be a part of their experience. Thank you Mark and Susan for choosing Maction Planet. 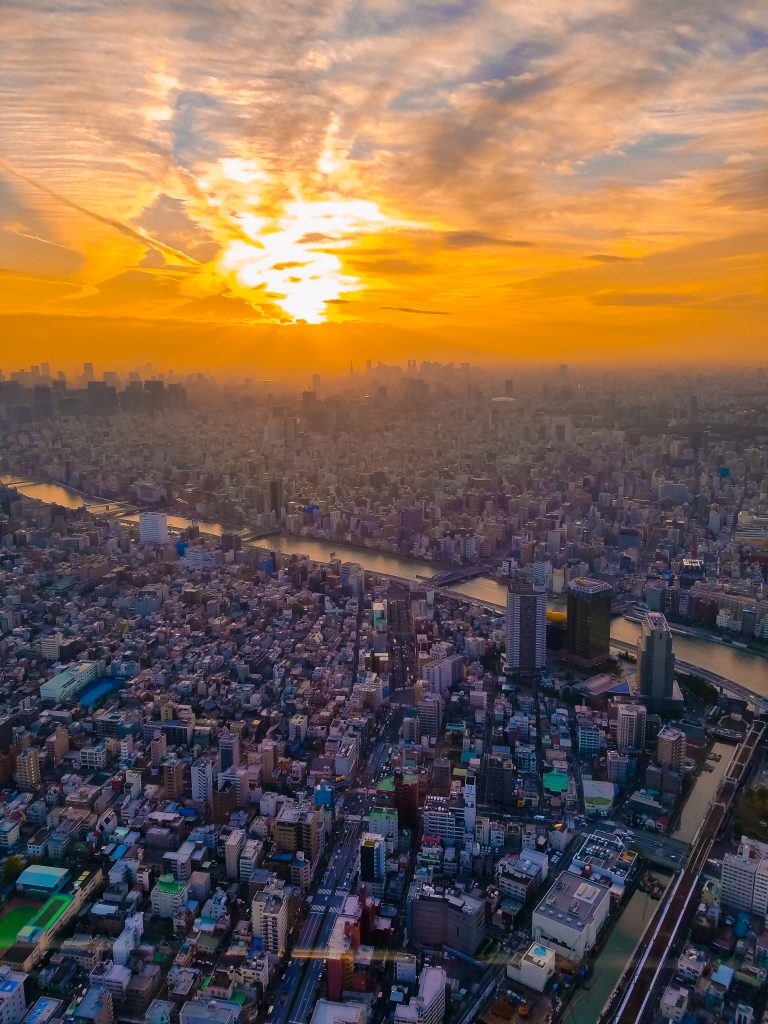 The Sun Also Sets: … but when it does, this is what it looks like over the World’s Greatest Metropolis as seen from the Tokyo Skytree on 30 October 2019.