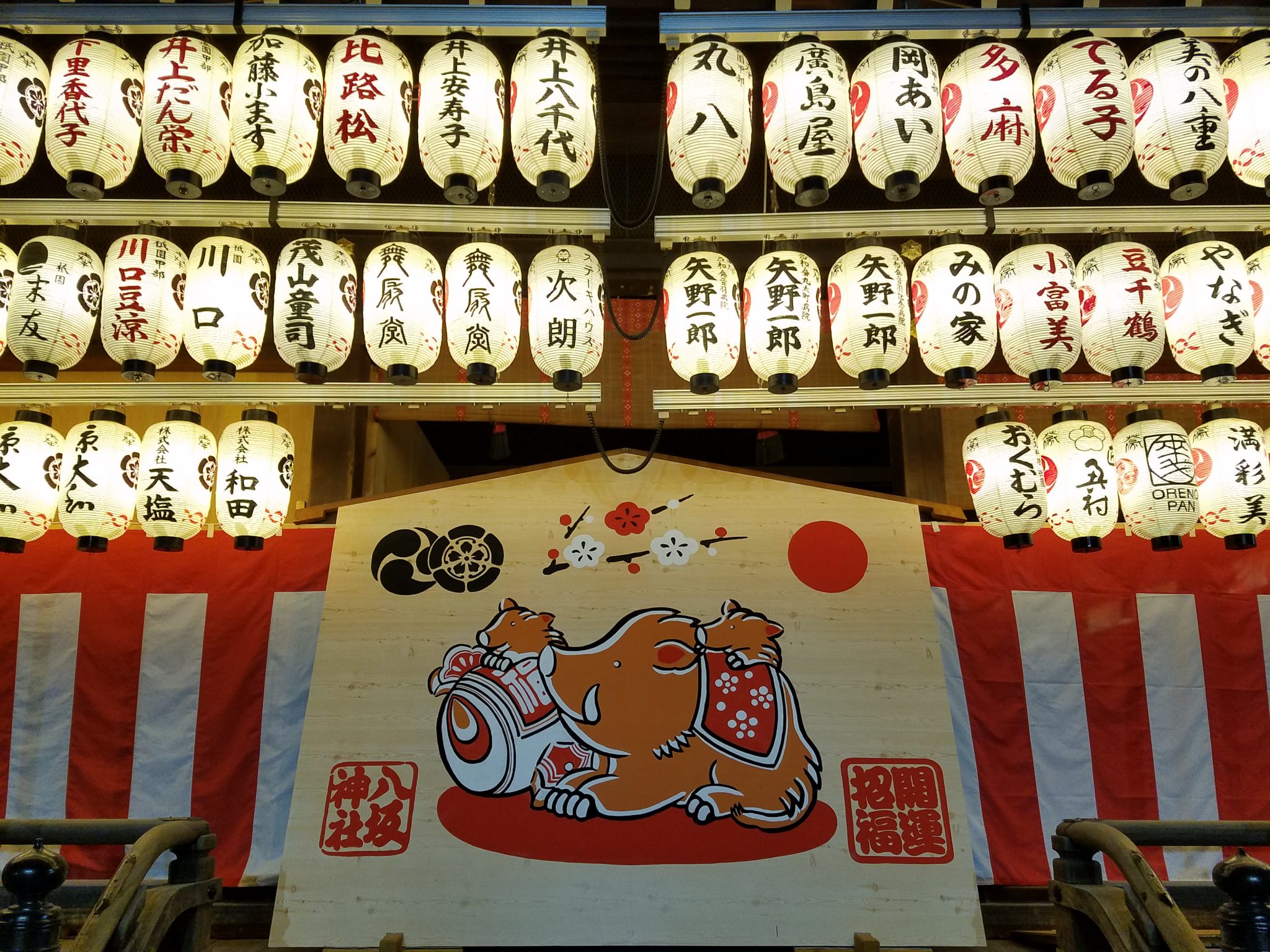 HAPPY NEW YEAR! A special New Year edition of This Week in Tokyo and Kyoto. Check out photos from our tours and read insights into our explorations as we get under the skin of the World’s Greatest Metropolis, and beyond. This week’s edition is hosted by Mac, our Founder and Lead Guide, who has been guiding across the country as part of a fully-booked holiday period for Maction Planet. This week: Year of the Boar at Yasaka Jinja; Shichifukujin Meguri; Asics Kadomatsu; 30 years of Akihito and Peach Coca-Cola returns!

Featured image – Year of the Boar at Yasaka Jinja: 2019 is the Year of the Boar (inoshishi) in Japan. Of the twelve zodiac animals, this is the only one this is different from the Chinese system, in which it is the year of the pig! Look out of inoshishi ema (votive tablets) across shrines and temples in Japan. This huge ema, surrounded by spectacular lanterns, comes from Yasaka Shrine in Kyoto. 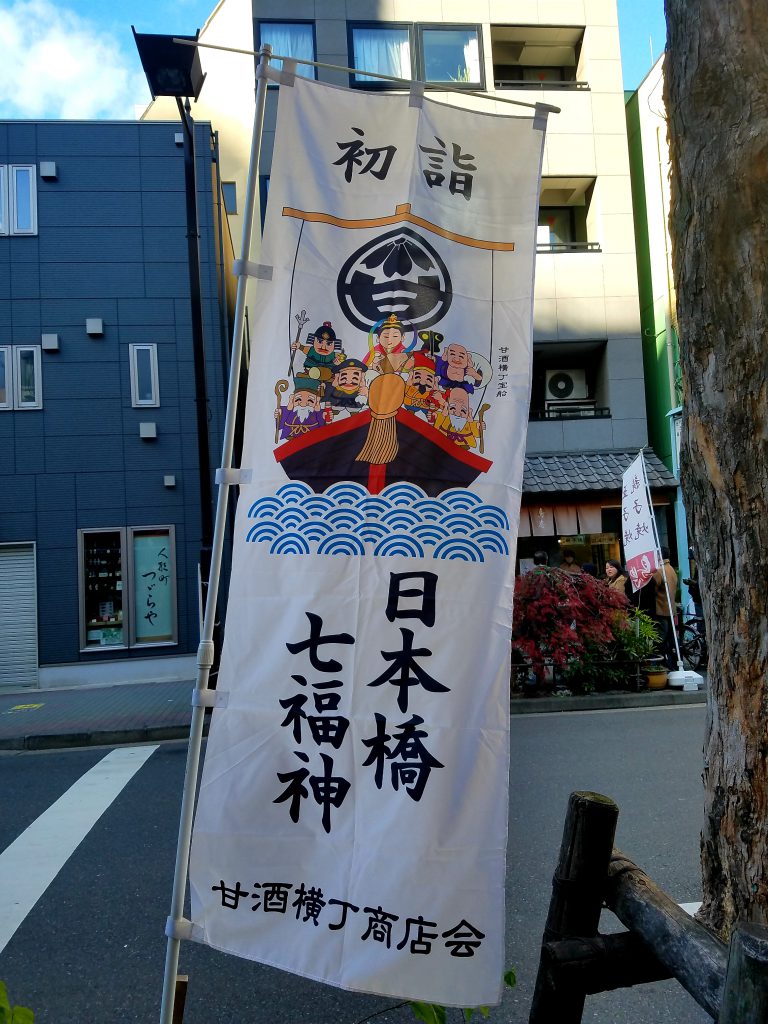 Shichifukujin Meguri: The Seven Gods of Fortune are Daikokuten, Ebisu, Benzaiten, Bishamonten, Hotei, Jurojin and Fukurokuju. During the new year, it’s customary to visit shrines that deify them in order to pray for fortune and health for the year. Usually it’s done in the period from the New Year to 10 January. Recently, performing this Shichifukujin meguri and collecting the associated goshuin (stamps given to shrine and temple goers) has come back into fashion. One of the most popular is the Nihonbashi course, which this banner is advertising. 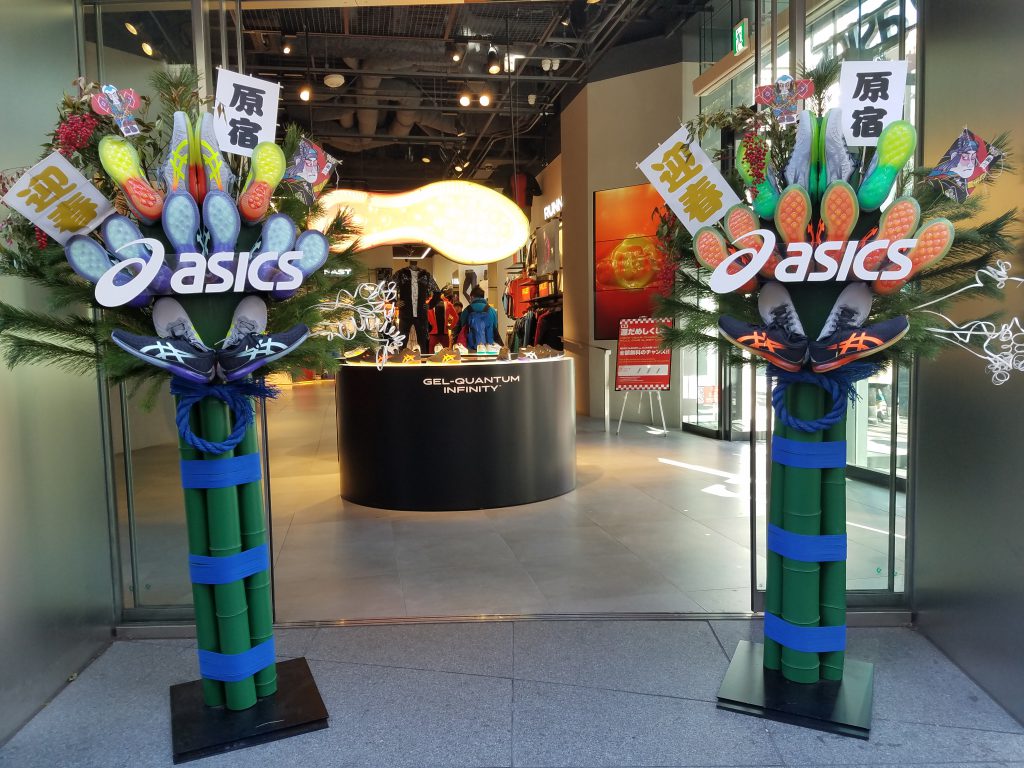 Asics Kadomatsu: Kadomatsu (門松) literally means ‘gate pine’ and is a popular decoration placed in pairs outside the entrance of shops, offices and houses. The kadomatsu is considered temporary house for the kami (gods) and welcomes the Toshigami, the god of new year, who brings blessings. The practice dates back over four hundred years. They are placed after Christmas until 7 January (15 January during the Edo period). It is composed by three pieces of bamboo diagonally cut, tied together with a straw rope, in three different heights to represent (in descending order) heaven, human beings and the earth. Pine branches are often used to complete the arrangement. Bamboo symbolizes growth and strength while pine represents long life and endurance. Sometimes plum branches are used too. You don’t often see trainers in the composition, but the Asics store on Takeshita Dori in Harajuku has decided that this was exactly what was missing from this long-standing tradition! 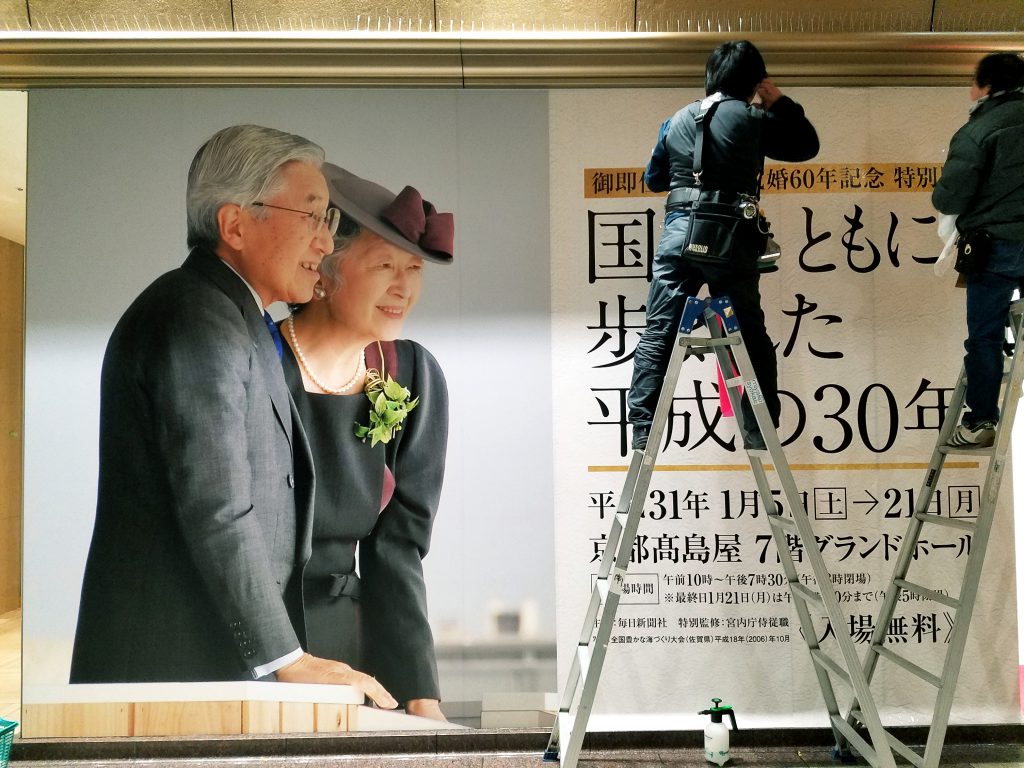 30 years of Akihito: Emperor Akihito ascended to the Imperial Throne of Japan on 8 January 1989, exactly 30 years ago today! From 15 to 21 January Takashimaya in Kyoto is holding a special exhibition to commemorate. These guys were putting the finishing touches to the launch on the night of 5 January as I walked back from guiding my guest Ryan for an evening on night photography around some of Kyoto’s historic districts. This year marks the final year of Akihito’s reign and the end of the Heisei period on 30 April 2019 (Heisei 31), when he will abdicate the Chrysanthemum Throne and a new imperial reign will begin under current Crown Prince Naruhito! 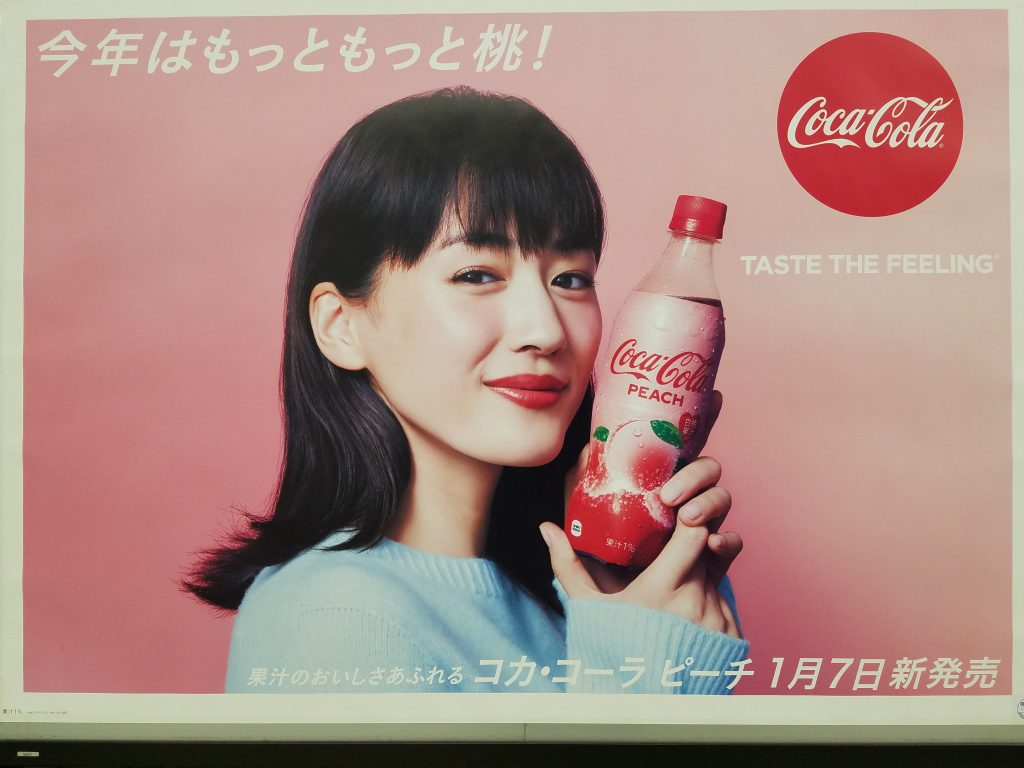 And finally… Peach Coca-Cola returns!: Back in January 2018, Coca-Cola released a never-before seen peach flavour exclusively in Japan. Coca-Cola has decided to re-release the flavour with an all-new bottle design and formulation, which now contains one-percent white peach juice. Last year’s version had no juice, so Coca-Cola says the new Peach Coca-Cola now has better flavour and even more aroma. In Japanese legend, peaches are believed to have the power to sweep away evil. Demand for peach drinks is highest in Japan from January to March.  Having tried this new Peach Coca-Cola on release day, I agree that it is an improvement on last year’s. I will leave it up to our guests to decide whether it is objectively good in its own right!

We wish all our guests, apparel customers, readers of our blog, listeners to Maction Planet Radio and supporters all over the world a very prosperous 2019. Thank you all for your support. We continue…