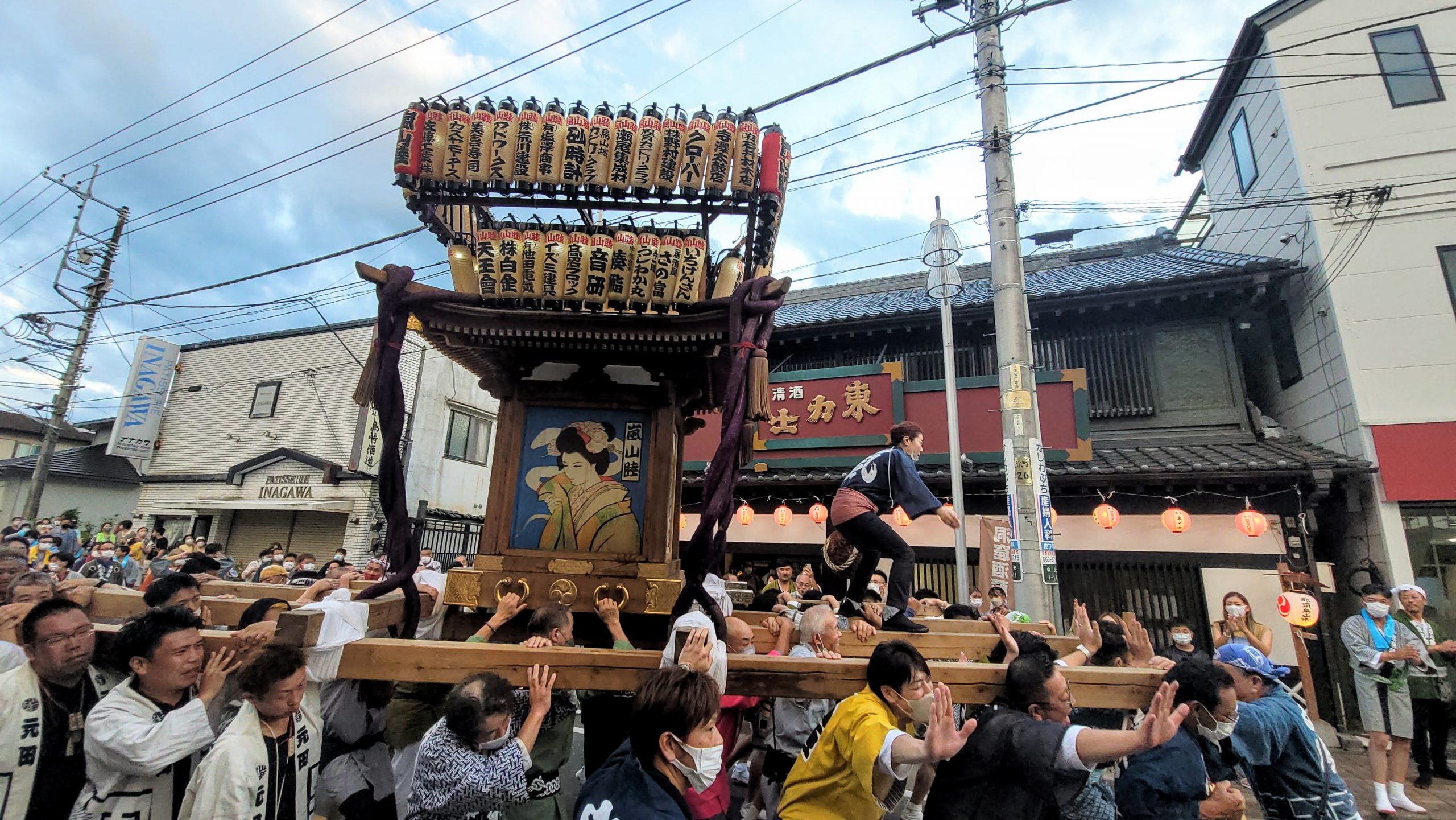 It’s matsuri time! Many festivals in Japan take place in the summer – annual traditions, deifying the gods, pacifying the spirits, celebrating the seasons, marking historical events, asking for harvest protection, preventing or curing disease, transfers of power… whatever the reason they are often colourful affairs involving the local community and enjoyed by all.

This weekend I attended two festivals, both in Tochigi. One in Karasuyama and one in Mashiko.

Karasuyama: The Yamaage Festival is a unique street kabuki festival first held in 1560 by the then-ruler of Karasuyama Castle, Lord Nasu Suketane, to ward off an epidemic. It’s now registered as ‘UNESCO Intangible Cultural Heritage’!

The six neighbourhoods of Nasukarasuyama City rotate the responsibility each year of putting up the kabuki stage in the streets. Local handmade washi paper depicts Mt. Harika, and the performance takes place in front of it. The stage is dismantled after each performance and moved around town on a roughly two hour schedule. Quite the achievement.

As well as this unique aspect of the festival, there is also the ‘usual’ mikoshi (portable) shrine carrying, as you can see from the featured image.

A great day in a great town!

Mashiko: The Mashiko Gion Festival dates back to approximately 1705 and is held from 23 to 25 July each year. It’s another one with plague and pestilence-related origins

The unique point about this one is the omiki chodai shiki – the ceremony of receiving Japanese Sake from Deities. This ceremony is held on 24 July. Ten gentlemen from the next year’s community have to drink up hot Japanese sake from an extremely large sake cup. The amount of sake per cup is 3-sho, 6-go and 5-shaku* (approx. 6.5 liter), meaning 365 days in a year and they have to drink up three cups.

After being cancelled for two years, this year’s festival took place behind closed doors, with onlookers peering in from outside the hut where the ceremony took place.

There are other parts of the festival, such as hand-held fireworks, which were cancelled again this year. But, fear not, you don’t need a festival to have fun in Mashiko. The sake which is drunk at the ceremony comes from Tonoike Shuzo, and CEO Shigeki Tonoike recognised me through the window of the hut and invited me to pop into his brewery. This gave me the opportunity to personally congratulate him on his awards collected at Kura Master and the International Wine Challenge, after having had the chance to congratulate his son!

Yoichi 10 is back: One of Nikka Whisky’s most popular bottles, Yoichi 10, is back after seven years off the shelves! Back? That’s right – Japan’s second largest whisky maker, founded in 1934, has not had a single single malt with an age statement on the shelves for 7 years! What went so, so wrong to bring about this situation? Find out in this video taking a look at the history of the Yoichi brand, Nikka’s issues and the return of the Yoichi 10. All the specs, insights and info you have come to expect from Kanpai Planet!

Behind-the-scenes at Kanpai Planet: I’ve received a lot of lovely comments about the editing in the new Yoichi 10 video, so I thought I’d give you a blow-by-blow behind-the-scenes account of how this one was created:

The bombshell news dropped from Asahi Beer, Nikka’s parent company, via press release at 14:00 on Thursday 14 July. I saw it, and got very excited. The first thing I did was to check my calendar and make sure it wasn’t April Fool’s Day.

The press release was only in Japanese, and there was nothing in English, so I knocked up a quick graphic and shared the news across the Kanpai Planet social media universe. The reaction was pretty insane.

Kanpai Planet is (currently) a video-led platform, so my thoughts naturally turned to… creating a video. I started jotting down ideas, but I had three meetings for my travel business (Maction Planet) in the calendar for that evening.

PLUS, I was already all in on putting out a video that night reviewing Mars The Y.A. #01. I decided to go ahead and publish it (youtu.be/w2YNyWVpQgs)

All this, along with keeping up with all the comments, shares etc across the Kanpai Planet platform for the Yoichi 10 news and the Mars video, and some other writing work, kept me pretty busy until it was time to sleep.

I woke up on Friday morning, went straight to my computer and wrote something which was about 90% of what you ended up seeing on screen. However, at midday, I had to leave for a pre-planned 3.5-day trip to the Anytime Whisky Festival in Nagoya and the Gion Matsuri in Kyoto.

I got back to Tokyo late on Monday. I headed to Aloha Whisky Bar on Tuesday morning. I had learnt more info about Yoichi 10 through my channel checks over the weekend which I incorporated into the video, and after shooting my B-roll I began rolling the camera that afternoon.

I pressed record, skipped round the bar and was about to utter my first words when the ice machine kicked up. This thing has a life of its own. We’ve tussled before, but I usually win after 30 mins. Clearly bitter about my previous victories, it was still going 2 hours later.

At this point I started to wonder what I was doing with my life, and why the ‘heck’ I didn’t start a blog instead of a video platform. I emptied the ice machine, a 15-minute job, turned it off, and did my thing.

I film by myself, which means I use a cardboard cutout of me to fix the camera’s focus. After spending 75 minutes filming I headed back to the camera and checked my recording. Sadly, for the first time ever in the history of Kanpai Planet, the focus was off.

I’ve received a lot of lovely comments about the editing in my latest video (youtu.be/nlv0Yzp5W-k), which covers the new Yoichi 10 from Nikka, so I thought I’d give you a blow-by-blow behind-the-scenes account of how this one was created.

I had two choices: Record now, or come back tomorrow. After some deliberation, I decided to ignore my aching feet and record that night. The new take went very well – much better than the first. I left the bar at 22:00, having arrived 12 hours earlier.

Normally I get home at around 18:00, which means I can transfer my footage and do my selects that evening. However, I had to write my weekly ‘This Week in Tokyo’ blogpost on the Maction Planet blog before midnight. I haven’t missed a week in 4 years.

Wednesday morning, I’m at my desk at 07:30 to begin editing, and I leave my desk at 23:45. Still some final checks to do, but I decided not to release the video that night so I could do them clear-headed the next day.

After 5 hours of sleep, I am back at it at 05:30. Thursday Mac thinks that Wednesday Mac made some poor editing choices… plus now that I have ‘time’, of course, I can make the video EVEN better. Cue funkier transitions…

Luckily I had a regular dental check-up at 11:30 and meetings on and off for the rest of the day, which forced me to export at the latest at 11:00. Video is truly never-ending, so having a hard deadline is a blessing in disguise. Luckily my dentist is round the corner!

With no bottle to photograph, I need a thumbnail. I remember a Youtube-y photo I took when messing around taking potential shots for my ‘The First Hibiki’ video, which I repurpose for this one. Some very quick Photoshop done while video is exporting.

I set video uploading to YouTube, head out to the dentist, then a lunch meeting, then go for a haircut. While sitting in the barber’s chair I was able to finish the video description, upload the thumbnail and release the episode.

I hope you’ve enjoyed this insight into life on Kanpai Planet.

If you’d like to support Kanpai Planet, please head here: buymeacoff.ee/kanpaiplanet. I truly appreciate it:

Thank you for watching. Kanpai!