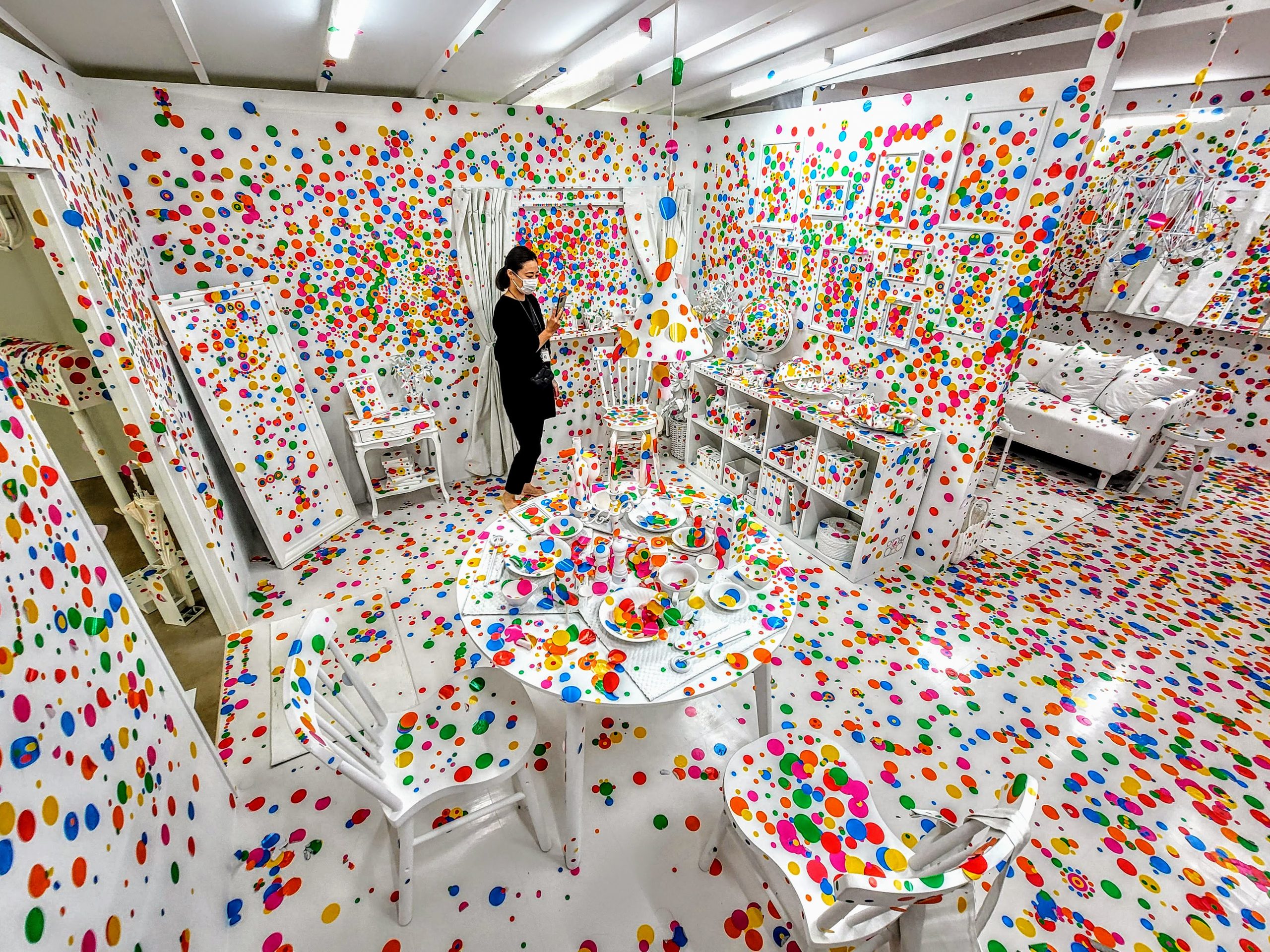 Welcome to ‘This Week in Tokyo’, a review of the Maction Planet week that was and a look ahead to what’s coming up in the city. Hosted by Mac, our Founder and Lead Guide, you can check out photos from our tours and read insights into our explorations as we get under the skin of the World’s Greatest Metropolis, and beyond! This week: Obliteration Room: Swallows Dome Home; Volunteering thanks; Akita Edamame Beer and Japan’s New Whisky Standards – 6 Months On.

Featured image – Obliteration Room: “Self-obliteration” has been a long-standing theme for Yayoi Kusama (1929-) since the 1960s. As the polka dots cover up walls, objects, spaces… everything disappears into them.

The photo shows the culmination of 2 months of obliterating by Tokyoites as part of Pavilion Tokyo 2021 – a world-first experiment to propose unrestrained and new urban landscape by installing architectures or objects at locations, mainly around the National Stadium. Pavilions in which the architects and artists express one’s hope for the future.

Swallows Dome Home: As any Maction Planet fan knows, the Tokyo Yakult Swallows play at Meiji Jingu Stadium. Its location, right next to the National Stadium, made it prime real estate for Olympic and Paralympic-related storage. As a result, the Swallows played six home games at the Tokyo Dome. We lost three, drew one and won two, and luckily I was there for one of those on 3 September, when we beat the Hiroshima Toyo Carp 3-1. A historic occasion on many levels. Thankfully, we are back home at Jingu from 11 September. As Homer Simpson once said, “And that’s the end of that… chapter.”

Volunteering thanks: The Olympics and Paralympics are over. They couldn’t have happened without the army of volunteers that helped keep everything moving, spirits up and demonstrated that classic Tokyo hospitality tens of thousands of times over. I’m not the only one who is grateful to them – Toaran, mascot of the city-run Toei Transportation network, is too. Here he is thanking them all with a respectful bow. Arigato Gozaimasu!

Akita Edamame Beer: We have a lot of tourist beers in Japan which use local ingredients, just because. Outside of the novelty, few impress me. This was an exception. Akita Edamame Beer. Yeah, that’s right. EDAMAME. Immature soybeans in a pod. The beer was developed by the Akitainu (Akita dog) tourism promotion organization and Tokyo-based liquor importer Luce Co., and brewed by Tazawako Beer using a paste made from freshly-picked soybeans. All very appropriate because edamame are an izakaya beer snack staple! Nothing revolutionary – just a solid, refreshing easy-drinking beer with some depth added by the Edamame. A premium ¥770 ($7) well spent. I picked mine up at the Akitainu Visitor Center in Odate but you might snag one in Tokyo at Isetan in Shinjuku or select restaurants. Kanpai!

Japan’s New Whisky Standards – 6 Months On: 6 months on, have Japan’s new whisky standards, announced by the Japan Spirits & Liqueurs Makers Association in February 2021, made any difference? They have – for good, and for bad. In this video, I take a comprehensive look at the current state of Japanese whisky. It took me 2.5 days to make. That effort was rewarded when it became the best-performing Kanpai Planet video of the 20 so far. If you haven’t watched it, what are you waiting for?!