Welcome to ‘This Week in Tokyo’, a review of the Maction Planet week that was and a look ahead to what’s coming up in the city. Hosted by Mac, our Founder and Lead Guide, you can check out photos from our tours and read insights into our explorations as we get under the skin of the World’s Greatest Metropolis, and beyond! This week: Panda Hello Kitty in the arms of Pompompurin; Ole! Ola! Lalala!!!; The Mishima Jizo; Taketsuru Old and New and Hollywood Ranch Market.

Featured image: Panda Hello Kitty in the arms of Pompompurin: Sanrio opened their 107th Sanrio Gift Gate in Ueno on 24 January 2020. You can’t miss it – a giant Pompompurin cradles a panda suited Hello Kitty on the shop front. The panda is a symbol of Ueno as nearby Ueno Park’s zoo has three giant pandas. The shop carries a range of Ueno exclusives, including plushies of six of Sanrio’s flagship characters – Hello Kitty, My Melody, Kuromi Pompompurin, Cinnamoroll and Pochacco –  wearing panda costumes… of course. Other Ueno-themed merch include pop-up cards with designs featuring Ameyoko Market and Hello Kitty chilling with a panda. 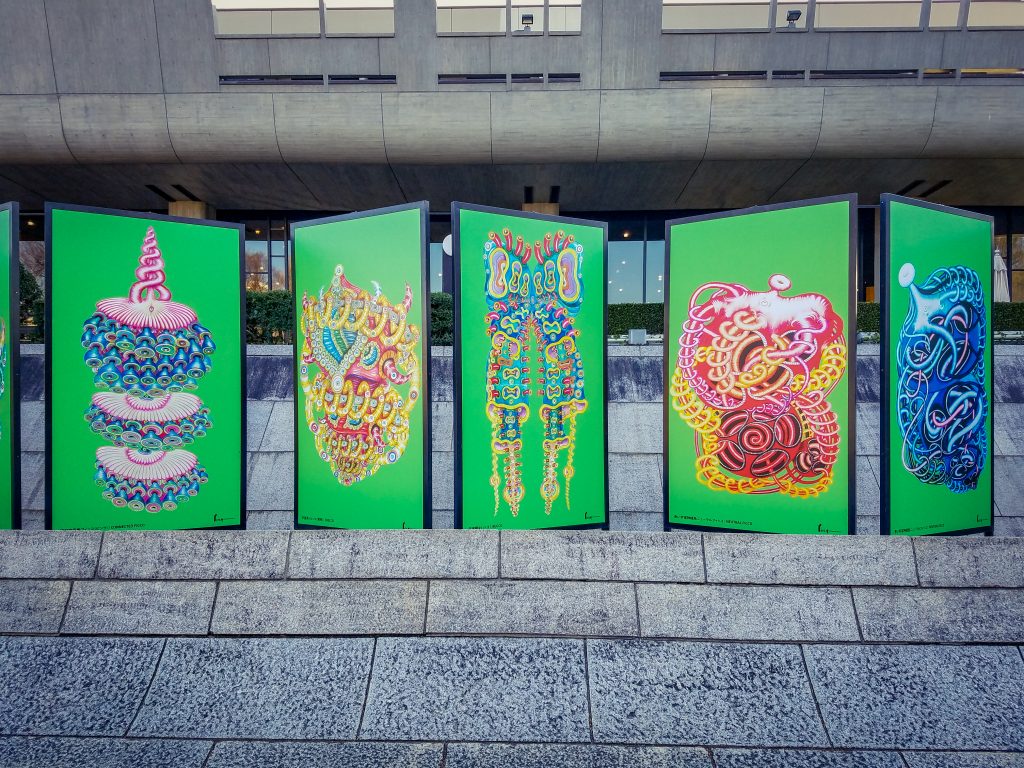 Ole! Ola! Lalala!!!: From 2 March until 19 April ‘Ole! Ola! Lalala – Yoichiro Kawaguchi’s Computer Graphics Music: The Anthropocene Deep-See Ocrchestra Some Five Hundred Million Years Away’ is on display outside the Tokyo Bunka Kaikan in Ueno Park. Here’s Yoshiaki Nishino, Director of the Intermediateque, to tells us more about it: “In the ancient times some five hundred million years ago, at the bottom of the sea during the Cambrian, jellyfish and sea anemones let themselves float gracefully amid the current. The origin of sound can be found in he rhythmical repetition of such movements: such is computer graphics artist Yoichiro Kawaguchi’s unique insight. Kawaguchi’s theory of cosmic evolution transcends the framework of human time-space and focuses on the cosmos in the distant future, some five hundred million years away. This vision is utterly extraordinary. The living organisms reunited here are outrageous in their appearance. However, they are not the product of some reverie. For they are the most extreme form attained by living creatures having continually adapted to varying habitats, as obtained through mathematical calculations. The living creatures in five hindered million years as predicted by algorithms: as strange as it may seem, the helixes and coils, the rhythmical patterns, the overflowing colours, the proliferation of energy produced by these images seems to be the very essence of music in the Anthropocene.” Some amazing artwork here. Well worth checking out on a socially-distanced walk as part of your break from self-isolation.

The Mishima Jizo: During the Second World War at 08:40 on 4 March 1945 the Yanaka area was hit by an air raid by B29 Bombers. 500 people were killed or injured and 200 houses were partially or wholly destroyed. In 1948 people living in Sansaki-cho, Hatsune-cho 4-chome and Mashima-cho had a statue of Buddhist guardian deity Jizo erected as a memorial to the over 70 people from the neighbourhoods who had died in the war. The name Mishima was derived by taking one character from the name of each of the three districts, and adopting alternative readings for two of the characters so that they could be pronounced easily when put together. 4 March 1945 was six days before the horrific 10 March 1945 air raid which all but wiped out East Tokyo and killed 100,000 people overnight. My hope is that each day brings humanity closer to world peace. The journey will be difficult but for now, “We continue…” 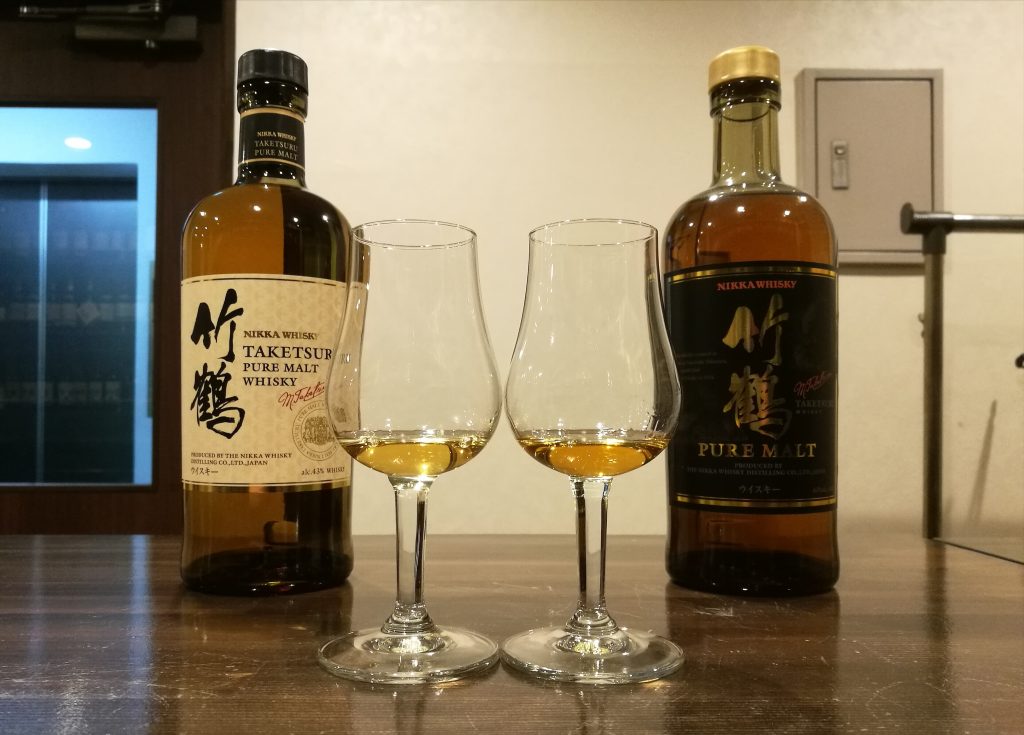 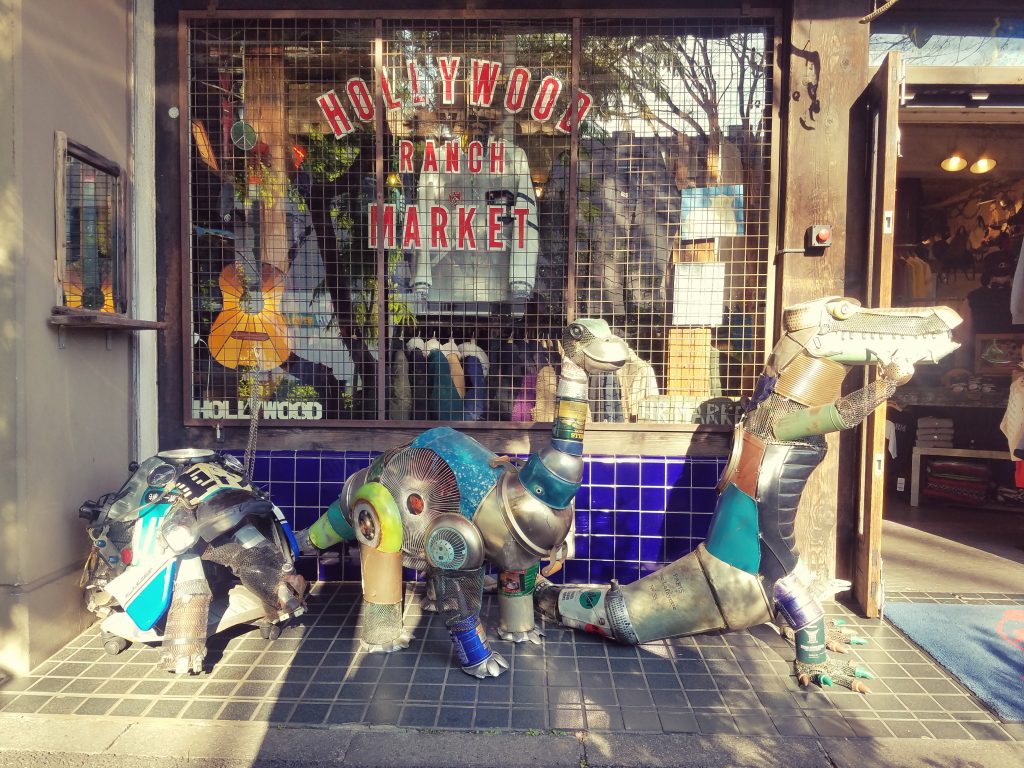 And finally – Hollywood Ranch Market: One of my favourite shops in Daikanyama. ‘Nuff said!