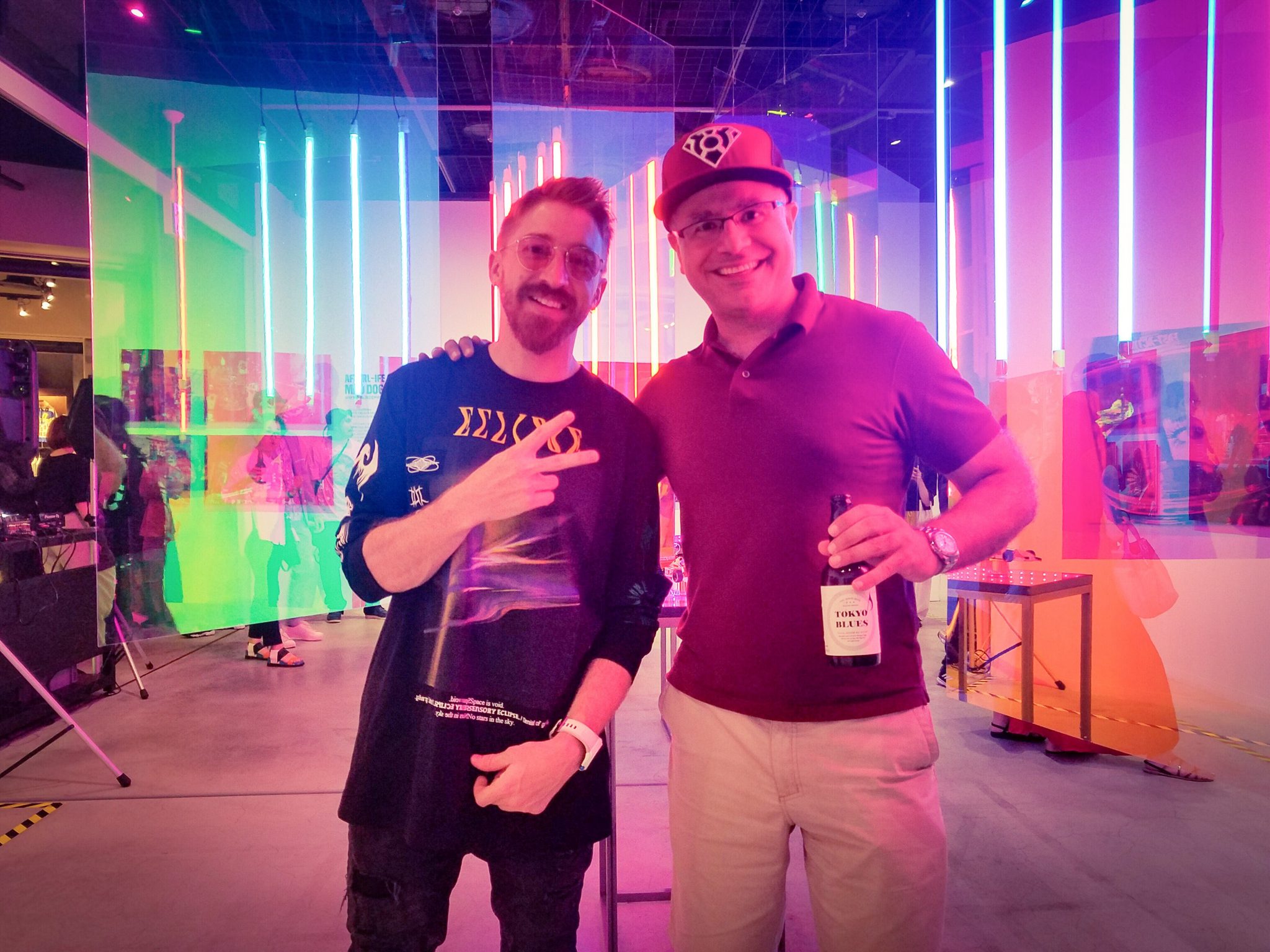 The latest edition of This Week in Tokyo – a review of the Maction Planet week that was and a look ahead to what’s coming up in and beyond the city. Check out photos from our tours and read insights into our explorations as we get under the skin of the World’s Greatest Metropolis, and beyond. This week’s edition is hosted by Mac, our Founder and Lead Guide. This week: Mad Dog and Mac; Wako at twilight; Too Many DJs; Pellegrini holds court and Kaiju Sakaba in Strong Zero Chuhai Garden!

Featured image – Mad Dog and Mac: Great to hang out with Mad Dog Jones at the opening of his first-ever exhibition. His work combines elements of cyberpunk, urban landscapes, the ripples of time. As (AKA Mad Dog Jones) explained to me, AFTERL-IFE, strangely-spaced hyphen intended, is about the breaks in life, the overlaying of past present and future into one space. It makes me reflect on the history that permeates our landscapes. Most of it is invisible to us but it happened and every moment of that time had affected us. Mad Dog Jones’ Instagram has over 167K followers despite only being launched in 2017. His visually arresting work has attracted many fans including Maroon 5, Tripple Redd, Chromeo and Vanoss, who have all gone on to work with him. AFTERL-IFE is held at the Diesel Art Gallery in Shibuya until 14 November 2019. 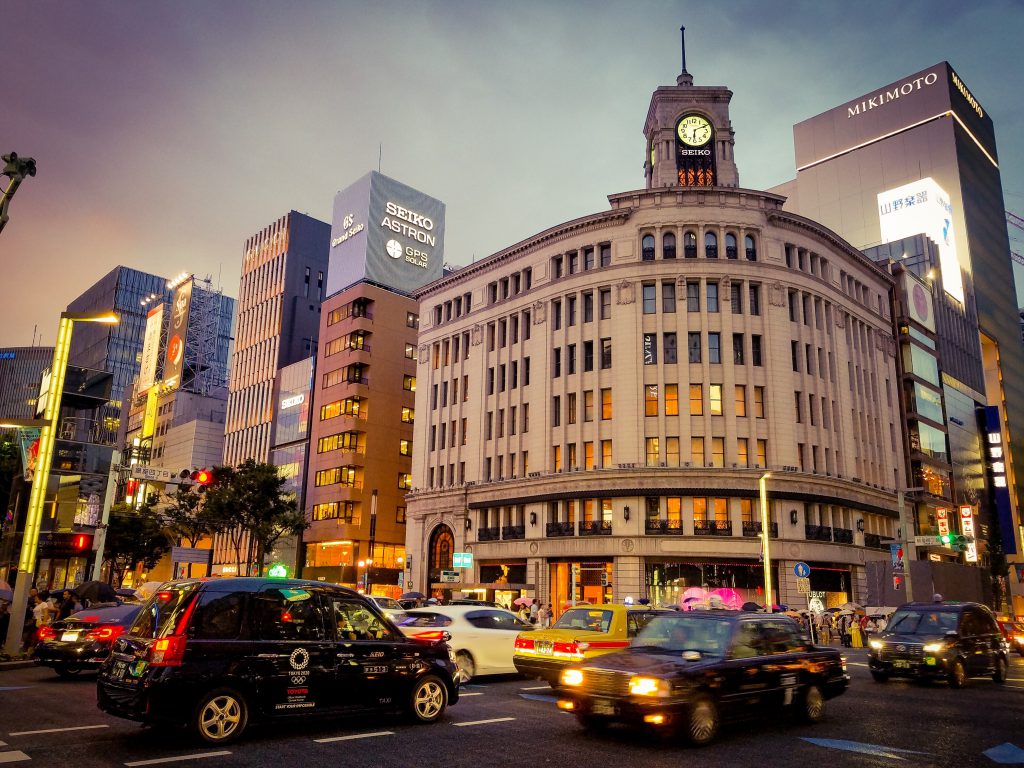 Wako at twilight: I spent 30 August guiding Alex and Olga in a 12-hour tour that had us hitting up 7 neighborhoods. At 18:00 we were in Ginza and, given the amazing light, I had to snap a photo of the Wako building at the heart of Ginza 4-chome.

Too Many DJs: From left to right – Royce Leong, Resident DJ of Maction Planet and Host of Tokyo ON; Namy, world-renowned soulful house DJ and producer; Marie Kimishima, famous for spinning funk/soul vinyls in her inimitable animated style; Mac, Founder and Lead Guide of Maction Planet and David Watkins, co-founder of tokyoswallows.com and Yamatalk English and Mac on Tokyo interviewee! Pictured on Saturday 31 August 2019 at the hotel koe in Shibuya. ‘Nuff said. 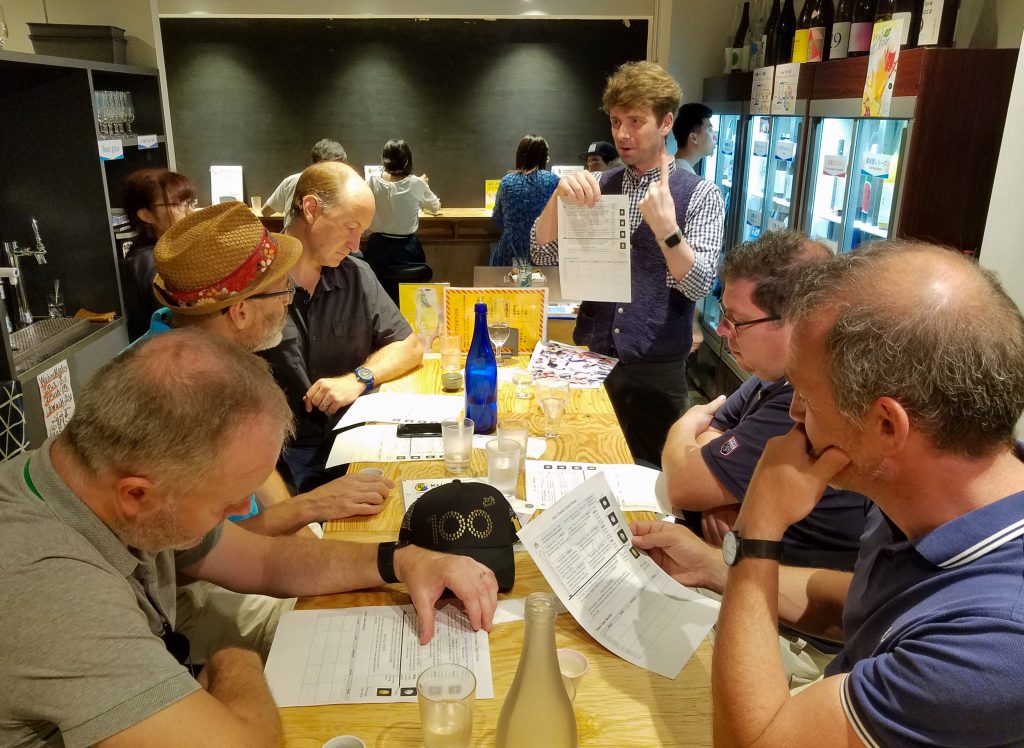 Pellegrini holds court: On Sunday I hosted a special tour for Alberto’s (the man in the hat) 50th birthday. Four of his best friends had flown over from his native Belgium, each staying for between 36-72 hours, to celebrate with him. His wife Emmanuelle had decided to arrange a Tokyo Private Tour for his special day which began with an exclusive tea ceremony and culminated in a sake and shochu tasting with Chris Pellegrini. It was an honour to be part of the celebrations which Alberto, a 3-year Tokyo resident, described as “the best day he has spent in Tokyo”. No higher praise indeed! 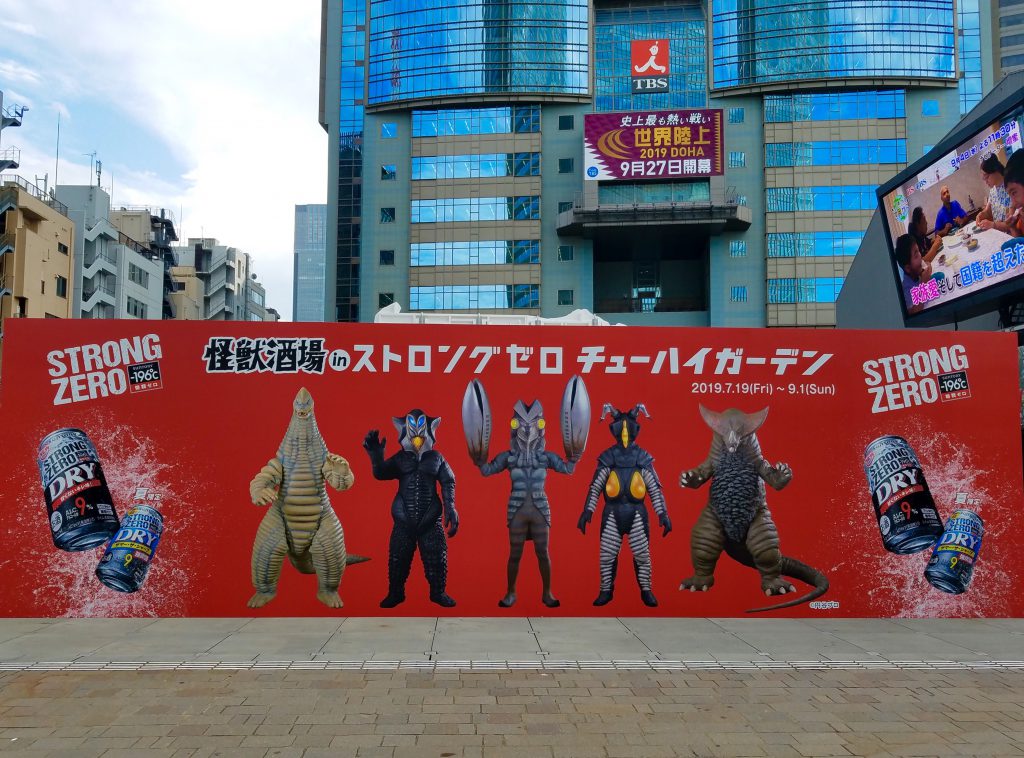 And finally… Kaiju Sakaba in Strong Zero Chuhai Garden: How can drinking ice-cold sours in the heat of the Japanese summer be improved? Of course, the answer is by doing it in the company of Kaiju. That is exactly what happened for a limited time at the Kaiju Sakaba in Strong Zero Chuhai Garden in Akasaka at the foot of the TBS building. Sadly the event ended on Sunday, but many of our kaiju-loving otaku-focussed Maction Planet guests had fun while it lasted!