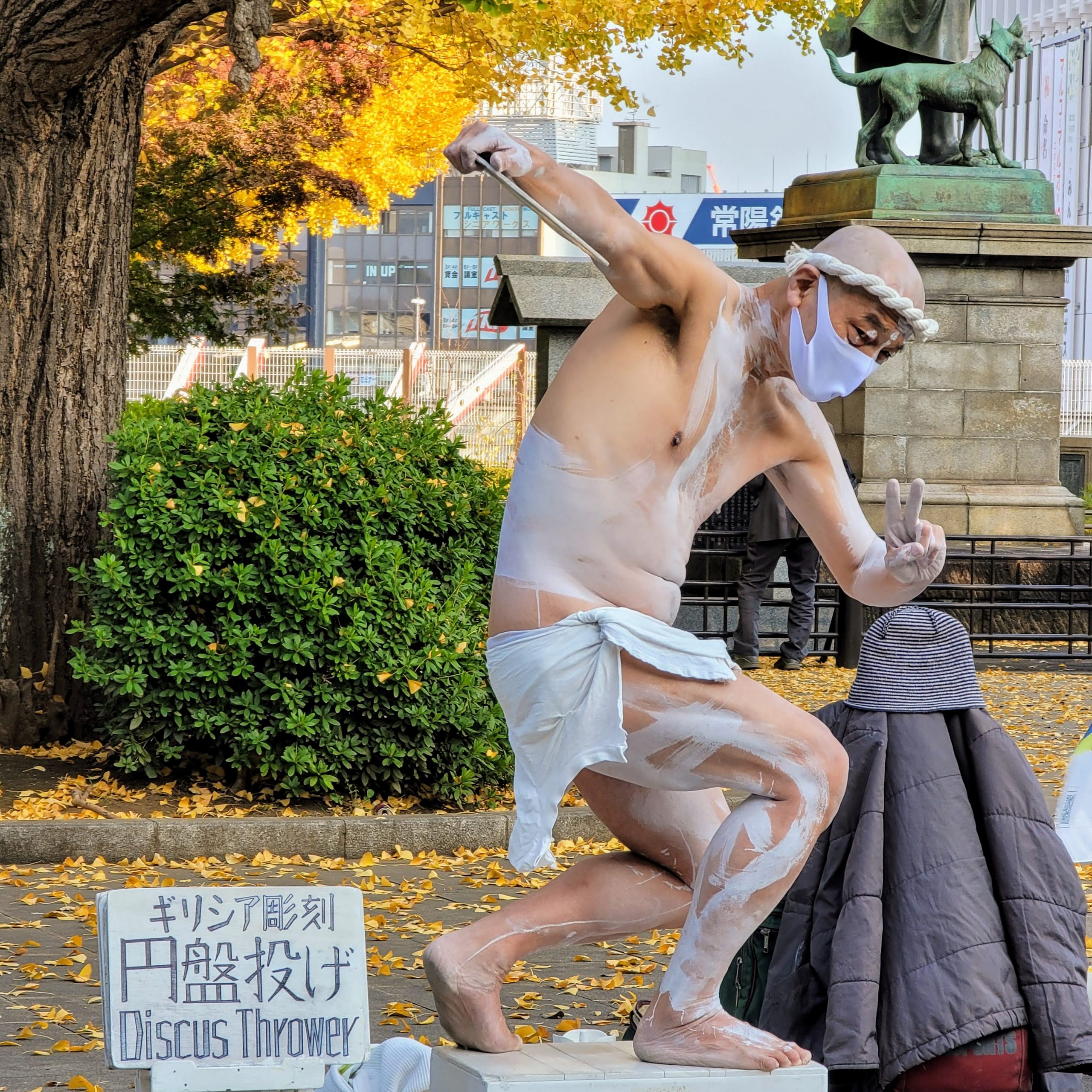 Welcome to ‘This Week in Tokyo’, a review of the Maction Planet week that was and a look ahead to what’s coming up in the city. Hosted by Mac, our Founder and Lead Guide, you can check out photos from our tours and read insights into our explorations as we get under the skin of the World’s Greatest Metropolis, and beyond! This week: The Living Museum of Art; Ramenate; Okumura Togyu; Rikkyo and Kanosuke Second Edition.

Featured image – The Living Museum of Art: The Living Museum of Art is an institution. Taro Yukitake has been democratising some of the world’s most iconic art in Tokyo’s parks since 1983. Here he is interpreting the Discobolus of Myron AKA The Discus Thrower in Ueno Park against the beautiful backdrop of the golden ginkgo trees.

Ramenate: I am running tours at the moment as Japan has selectively opened to business travellers and new residents! Here are my amazing guests JF, Larissa and family enjoying one of my favourite bowls of ramen as part of our one-day tour around the backstreets and lesser-known neighbourhoods of the World’s Greatest Metropolis!

Okumura Togyu: I was honoured to be invited to the press preview of ‘The Art of Okumura Togyu – A Master of Nihonga Whom Yamazaki Taneji Loved, Part 2’ at the Yamatane Museum of Art, which commemorates the museum’s fifty-fifth anniversary. The museum’s founder, Yamazaki Taneji (1893-1983), collected works by artists who were his contemporaries and with whom he had direct personal relationships, acting on his belief that “What is transmitted through a painting is the artist’s humanity.” He had a particularly deep friendship with Nihonga artist Okumura Togyū (1889-1990) and told him, early in his career, “I only buy paintings by people I am certain show promise.” Togyū lived to the age of 101 and continued to create until the end of his life.

We’ve featured one of the most famous pieces by Togyu, Cherry Blossoms at Daigo-ji Temple, previously on Maction Planet. That’s on display in the exhibition, but it was the bold, unique composition above, titled Himeji Castle, which caught my eye in this exhibition. In 1954, Togyū received the news that the central keep of Himeji Castle would be dismantled and restored. That year and the next he went to Himeji and made countless sketches of the castle. Initially, he considered painting a bird’s eye view of the castle, but ultimately he depicted it as seen from its side, looking up, after going through the “Ro” (second)Gate, emphasizing the magnificence of the castle, while the limited number of colours and use of planes suggests considerable influence by Cézanne, a painter whom Togyū adored. Check it out until 23 January.

Rikkyo: Rikkyo University, also known as Saint Paul’s University, is a private university, in Ikebukuro in Tokyo. It’s one of the Big Six top universities for its sports teams. The campus is beautiful, with two huge conifer trees in the courtyard, now decked out with Christmas lights!

Kanosuke Second Edition: Kanpai Planet is proud to present one of the world’s first reviews of Single Malt Kanosuke 2021 Second Edition. Can the sequel beat the highly praised original – the 2021 First Edition? Find out, as we give you a chance to get in on the ground floor of one of Japan’s most exciting new distilleries, with a primer and review of one of the most highly anticipated releases of 2021 – the second single malt from the Kanosuke Distillery, released on 12 November 2021.