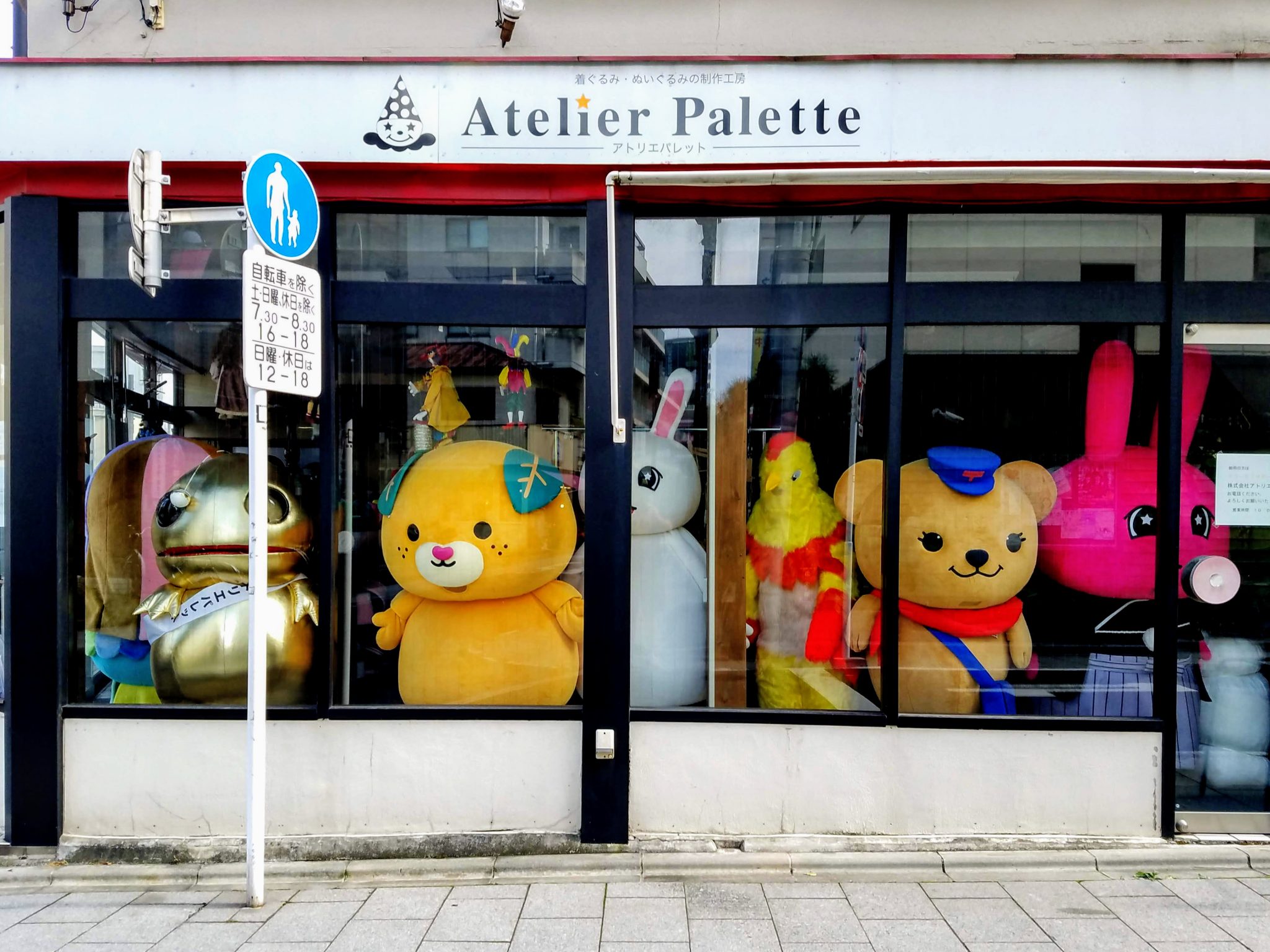 Welcome to ‘This Week in Tokyo’, a review of the Maction Planet week that was and a look ahead to what’s coming up in the city. Hosted by Mac, our Founder and Lead Guide, you can check out photos from our tours and read insights into our explorations as we get under the skin of the World’s Greatest Metropolis, and beyond! This week: Mascot Mafia; Happy Linen Anniversary to us; Panda Bento success; Gyoza Cooking Class and 8 things I learnt from 12 intensive weeks on YouTube.

Mascot Mafia: Sometimes you just have to explain a photo with the phrase “Because Japan.” It’s shots like this that make wandering around Tokyo and snapping pictures such a joy.

Someone has to make all those mascot outfits that you watched in this video, and that someone is Atelier Palette. They handmake costumes, hand puppets and stuffed animals. At your request, they can rush order your product in two weeks. “If you’re considering a custom-designed stuffed mascot, please get in touch for more details!” says their website. I think you should!

Happy Linen Anniversary to us: Today I found out that the 4th anniversary is the linen anniversary. Not quite as glamorous as silver or diamond, but I guess you have to work up to that…

I published a special 4th anniversary post celebrating the… err… 4th anniversary of the launch of the Maction Planet website. I received several messages asking me about the featured image of that post, which I’ll answer here.

The rake-like object is a kumade. We have used our Maction Planet kumade as the header images for our posts celebrating our first, second and third anniversaries. However this fourth anniversary kumade is a little different.

Kumade are rakes, sold at shrines and temples, giving good luck to businesses so they can ‘rake in’ the success. Most businesses buy kumade at a Tori no Ichi festival, held in November every year. Each year, as the business gets more successful, you are meant to buy a bigger and more elaborate kumade. As you can see from the first three year anniversary posts, that is exactly what I did.

Then 2020 happened. I wanted to continue the tradition, but to do so without a nod to the fact that it was not the year everyone hoped for seemed wrong. So, I took it back to basics. I purchased the least spectacular kumade I could find, and that’s what you see in the photo above.

You can find out more about what a kumade is by reading the 26 November 2019 edition of ‘This Week in Tokyo’ and watching our video of how we purchased our year three kumade at the 2019 Tori no Ichi.

Once again, I cannot express my gratitude enough to our tour guests, apparel customers, blog readers, vlog watchers, radio show listeners and collaborators around the world for your continued support. We continue…

This is my favourite photo from the day: The finished products from the evening class, worthy of Tokyo’s finest bento shops.

I’m sure gyoza needs little introduction given the boom in its popularity in the west over the last decade. A thin wheat flour wrapping with a filling of meat or vegetables, gyoza dumplings can be boiled, steamed, or fried.

Today, gyoza is found as an appetizer or side dish in many Japanese restaurants, especially ramen shops. We’ll be teaching you how to make yaki gyoza, the traditional Japanese gyoza, and serve it Shizuoka-style, a unique variant where bean sprouts are placed in the middle of the plate as a palate cleanser. Absolutely delicious!

Check out more details about the class then email info@mactionplanet.com to sign up!

8 things I learnt from 12 intensive weeks on YouTube: I’ve had a rollercoaster relationship with YouTube. I took a very half-hearted approach to it when I launched Maction Planet in early 2017.

In September 2019, I had the crazy idea of producing vlogs of my journey to every Rugby World Cup 2019 game I attended. I ramped up my editing skills and starting thinking about concepts like B-roll.

Some of these videos went viral and led to a variety of wonderful situations, from celebrity-like photo-ops with fans of my content, to TV appearances including one on TBS’ flagship news show N-Sta, which weighted my commentary equally with that of The Guardian newspaper!

I have been producing videos since then, but never on a consistent schedule, which is one of the key criteria for success on the platform.

That changed in December 2020 when I publicly committed to produce one video a week for the next 12 weeks. During this period I’ve produced taste tests, sports videos, and even a music video.

My final video came out yesterday. I wanted to share 8 key lessons I learnt from this adventure. You may find some of them relevant even if you are not a ‘YouTuber’.

There will be more coming on the Maction Planet YouTube channel, but for now, I’ll be focusing on producing content for our sister channel Kanpai Planet, which brings you the world of Japanese drinks direct from the heart of Tokyo! Click here to subscribe now!