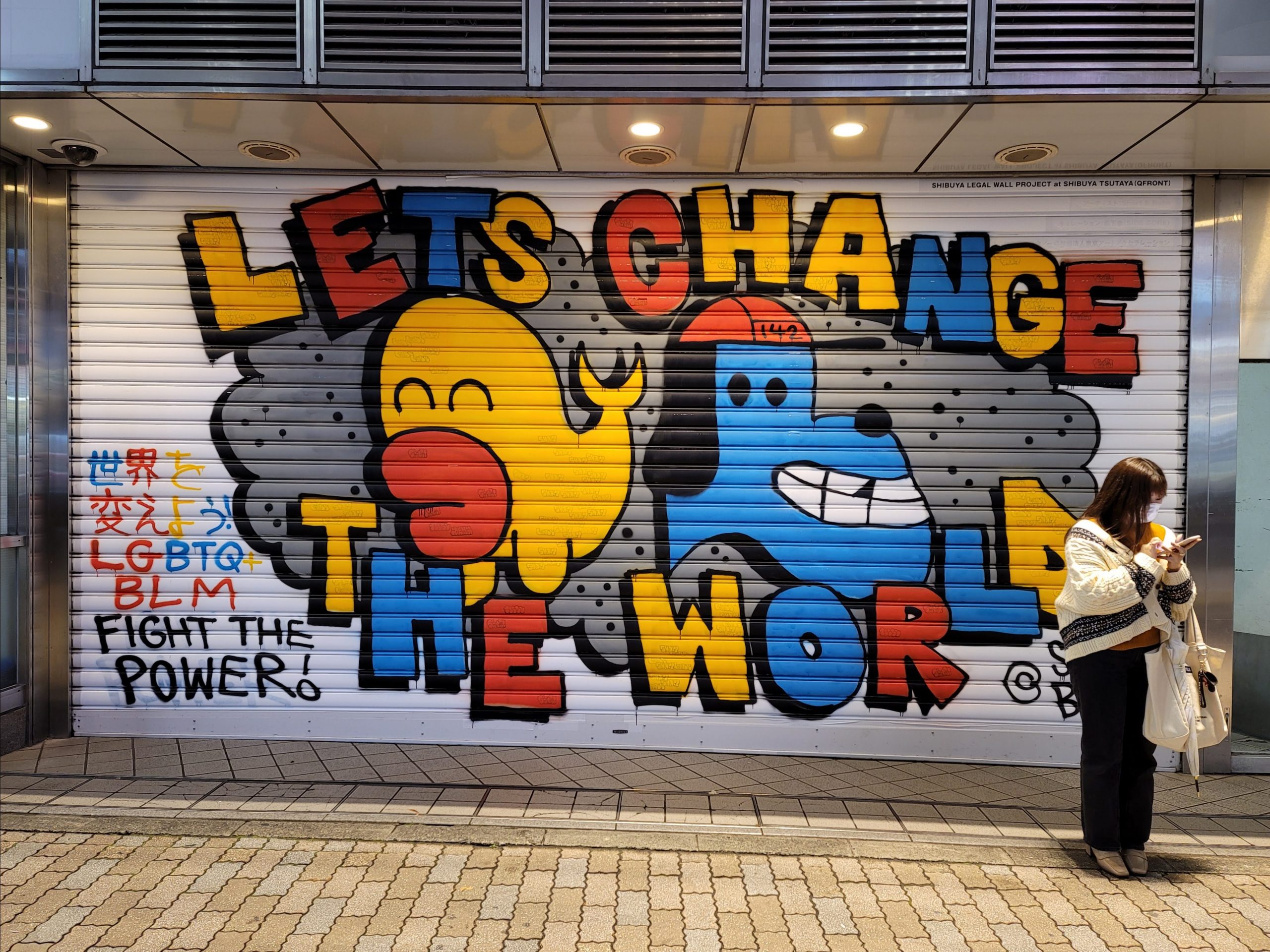 Welcome to another edition of ‘This Week in Tokyo’ – a review of the Maction Planet week that was and a look ahead to what’s coming up in the city. Check out photos from our adventures and read insights into our explorations as we get under the skin of the World’s Greatest Metropolis, and beyond. This week’s edition is hosted by Mac, our Founder and Lead Guide. This week: Let’s Change The World; Do Nothing. You’ll Live Longer; Happy Mask-ris from Matsuya; Tachikawa Local Pride and Hello Kitty Show Box.

Do Nothing. You’ll Live Longer: … and when I want a reason to not put out this week’s ‘This Week in Tokyo’, I continue through Centre Gai to PARCO, where this monkey standing on the top shelf at 2G reminds me that productivity and longevity may be inversely correlated.

Happy Mask-ris from Matsuya: How to explain Matsuya’s Christmas slogan, ‘メリー マスクリス’ (Meri- Masukurisu)? ‘メリー’ is the katakana for Merry, as in ‘Merry Christmas’. Christmas in Japanese is written クリスマス (Kurisumasu in the standard Hepburn romanisation of Japanese). Take the last two characters and stick them at the start of the word and you get マスクリス. The first three characters are マスク (masuku), which means mask, as in, yes, those things we (should) have all been wearing for the last year. The last two characters are リス (risu), which means squirrel! I think you can take it from there. Phew!

The masked squirrels are called Mary-chan and Chris-kun (of course). They were designed by Taku Sato Design Office, who, amongst other work, created the design and brand identity for Xylitol chewing gum!

Tachikawa Local Pride: I love this mural. It’s located in the epic tunnel which runs under the train tracks on the west side of Tachikawa Station. As well as various stars and animals, it features Kururin, Tachikawa City’s mascot character.

Hello Kitty Show Box: In October I visited Awaji Island. While there, I checked out the Godzilla Zipline. Before I got round to tackling the King of the Monsters, I visited the island paradise home of the world’s biggest single-character franchise.

That’s right: Hello Kitty has a base on Awaji Island and it’s a building in the shape of her head. It’s home to ‘Dream Theatre’ Hello Kitty animations and a live show, during which Hello Kitty dances and sings! You get a vegan lunch, and can spend all your yen on some exclusive Hello Kitty merch.

If this is all too much to visualise, we have you covered. On Friday, we released the latest video on the Maction Planet YouTube, featuring all the action at the Hello Kitty Show Box. Enjoy!