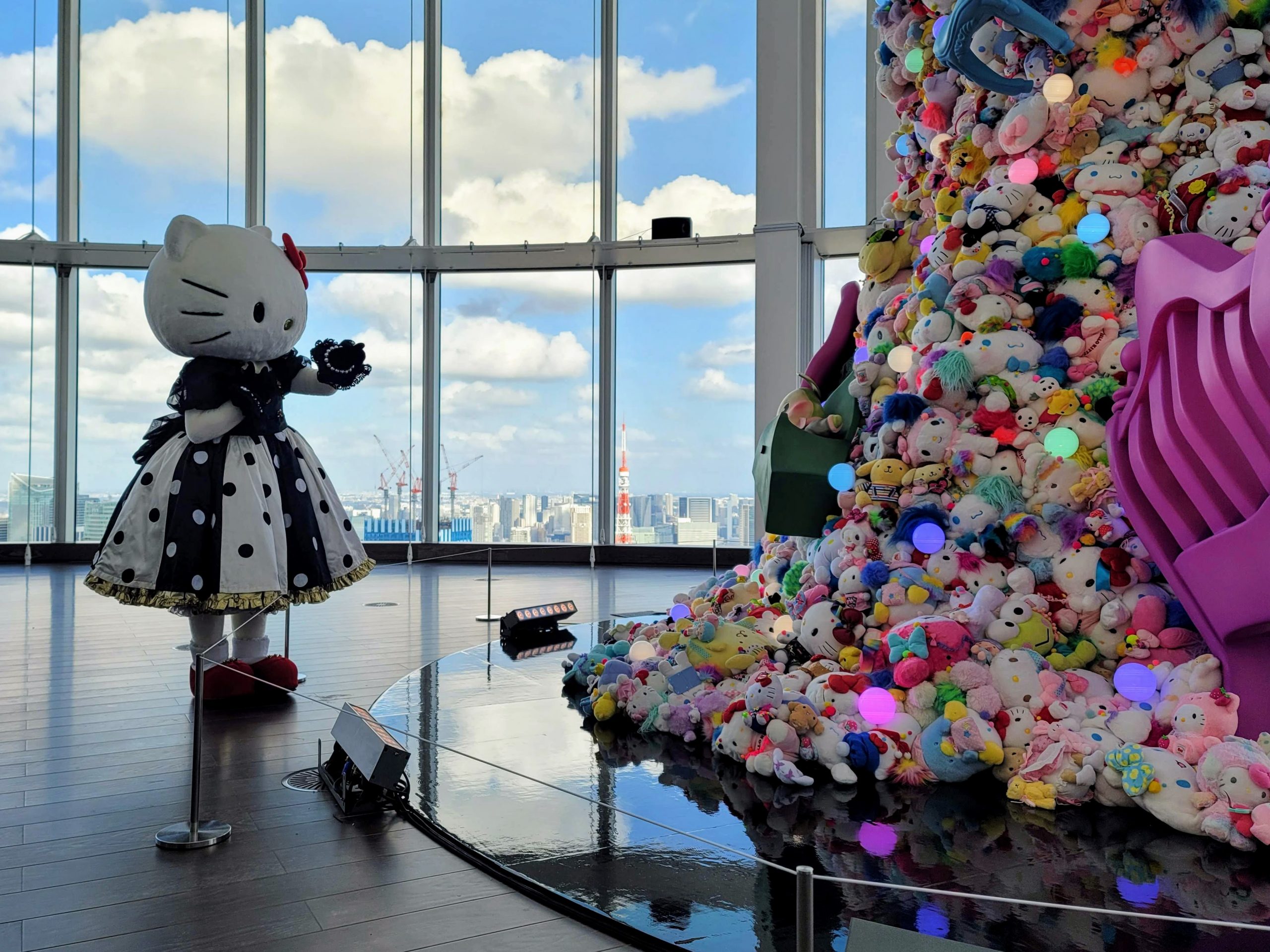 Welcome to ‘This Week in Tokyo’, a review of the Maction Planet week that was and a look ahead to what’s coming up in the city. Hosted by Mac, our Founder and Lead Guide, you can check out photos from our tours and read insights into our explorations as we get under the skin of the World’s Greatest Metropolis, and beyond! This week: The Beginning of Kawaii; The Complete Hokusai; Miraitowa climbing; Record-breaking Murakami and Fuji Single Grain Whiskey.

Featured image – The Beginning of Kawaii: I was honoured to be invited for the press preview of ‘60TH ANNIVERSARY SANRIO EXHIBITION THE BEGINNING OF KAWAII.’ It’s the ever largest exhibition of Sanrio’s history, featuring more than 800 products with Sanrio characters, as well as original drawings and behind-the-scenes material. The Sanrio story is essentially the story of kawaii culture.

Sebastian Masuda designed the layout of the exhibition and produced the Unforgettable Tower for this exhibition. Here’s the Queen of Kawaii herself, Hello Kitty, counting plushy effigies of herself in the tower, with the incredible backdrop of the world’s greatest metropolis behind her. Visitors to this exhibition will not only be able to enjoy the dynamic space design combined with the picturesque cityscape that only Tokyo City View can offer, but see some collaborative works by up-and-coming artists of Japan. The exhibition runs from 17 September 2021 to 10 January 2022.

The Complete Hokusai: Katsushika Hokusai (1760-1849) is most famous for his ‘Great Wave off Kanagwa’, which has become the single most recognisable piece of Japanese art. He debuted as an ukiyo-e artist at the age of 20, and, until his death at the age of 90, worked with frenetic, dazzling energy. In commemoration of the 260th anniversary of his birth, an unprecedented exhibition was held at Tokyo Midtown Hall, bringing together every page, every piece, and every image of his masterpieces “Hokusai Manga,” “Thirty-six views of Mt.Fuji,” and “One Hundred views of Mt.Fuji.” It was on from 22 July 22 to 17 September. Check out Hall 1 – that’s how to pimp up an exhibition space. Completely immersive Hokusai!

Miraitowa climbing: Hokusai’s influence lives on, sometimes in unusual places. Here’s an image, featuring Olympic mascot Miraitowa traversing a climbing wall while trying not to be distracted by a great view of Mt. Fuji, which currently adorns the perimeter of the parking lot which was once the Tsukiji Fish Market. This was sadly torn down and became a transport hub for the Tokyo 2020 Olympics. The long-term fate of the site is still undecided. Check the end of this post for more Fuji!

Record-breaking Murakami: Congratulations to Munetaka Murakami on the 100th home run of his career, achieved during a 5-1 victory by the Tokyo Yakult Swallows (obviously) against the Hiroshima Toyo Carp. What makes this achievement even more special is that he has become the youngest player in Nippon Professional Baseball history to achieve this feat, at the age of 21 years and 7 months, shattering the previous record by 2 months. This photo was taken during the post-run celebrations, against a backdrop of a beautiful sunset at the end of a glorious day in the World’s Greatest Metropolis.

Fuji Single Grain: It’s the first Kirin whiskey to be exported to the US. Has it been worth the wait? Find out as I put Fuij Single Grain Whiskey to the test. There’s a ton of history about the Kirin Distillery, their strategy, and much more.

Kanpai Planet has grown 50% in the last 4 weeks, and we’re just getting started. Join the party here!