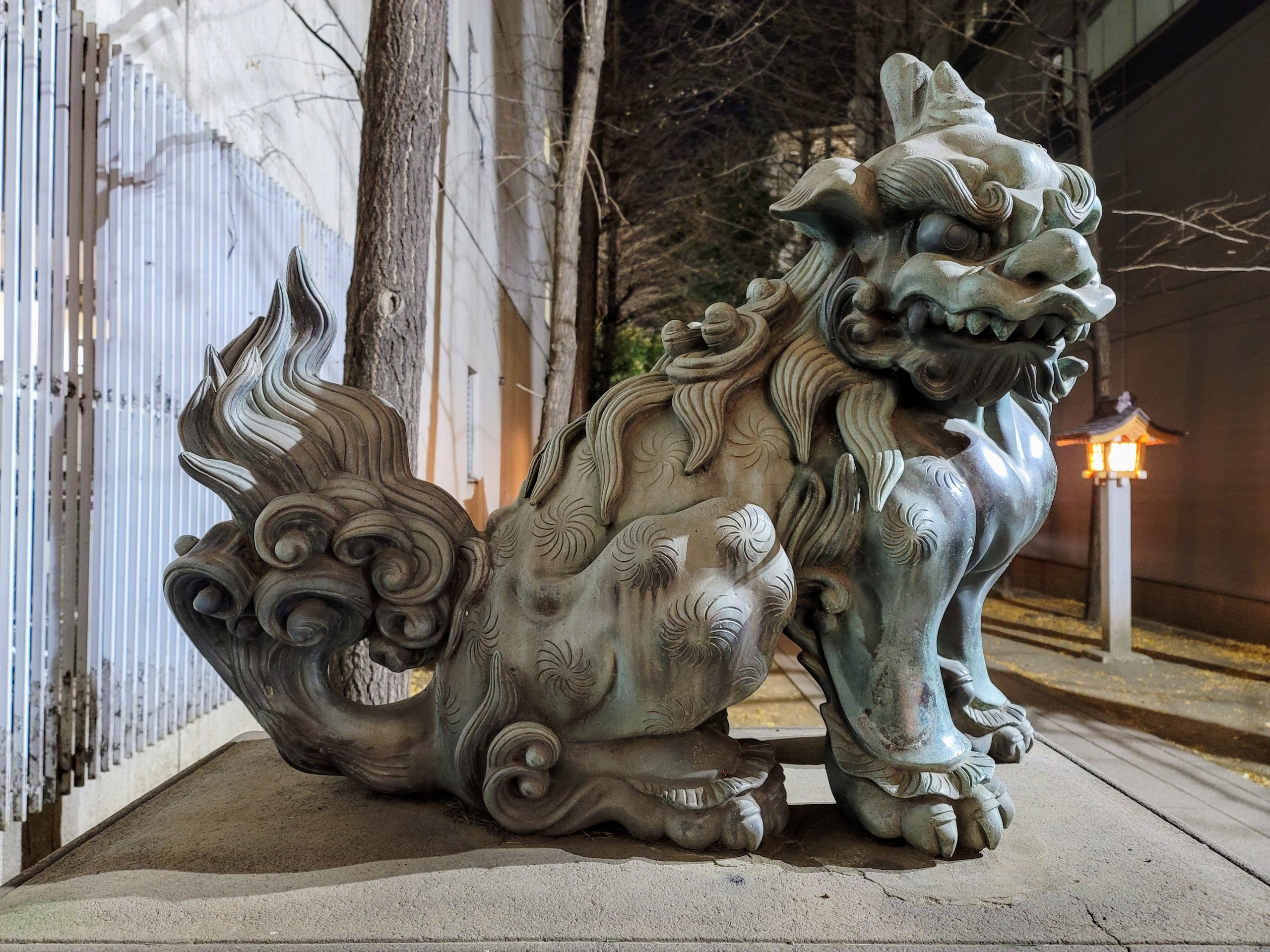 Welcome to ‘This Week in Tokyo’, a review of the Maction Planet week that was and a look ahead to what’s coming up in the city. Hosted by Mac, our Founder and Lead Guide, you can check out photos from our tours and read insights into our explorations as we get under the skin of the World’s Greatest Metropolis, and beyond! This week: Hanazono Shrine’s Karajishi; Our Magical Journey with Yuriyan Retriever; Tsukiji Honganji Jidohanbaiki; NO! BLOCK | YES! OPEN and The end of FAKE Japanese Whisky

Hanazono Shrine’s Karajishi: This is one of a pair of bronze ‘Chinese lions’ cast in 1824. They were donated to the shrine by Naitō Shinjuku parishioners, and the names of those who dedicated them or aided in their placement here are carved on the bases of the statues. The statues themselves are 75 centimetres tall, and the bases are 1.37 metres. Following a model made by the sculptor Sawaki Kazuma, Murata Seimin I, a specialist in casting in metal, created this pair of bronze images. The bases, with large and elaborate sacred straw festoons carved in relief, were the work of the stonemason Motohashi Kichibē. The heads of the images were cast in four separate sections: the upper head, face, back of the head, and mane. The bodies were divided into three sections: from the torso to the rear legs, the front legs, and the tail. The left and right sides of each of these three sections were cast separately and then joined together to make the complete image.

Our Magical Journey with Yuriyan Retriever: The boys are back on a Magical Journey in Fukushima and Tohoku! Episodes coming up this week on NHK WORLD-JAPAN. We visited the areas devastated by the Great East Japan Earthquake of 11 March 2011. For the Tohoku episode, we are also joined by Yuriyan Retriever, who international viewers will know from her legendary appearance on American Idol! We had a ton of fun filming these episodes, and the locals are some of the most incredible I have met in the 15 years I have lived in Japan.

The episodes will drop on 4, 5 and 9 March, Japan time. When they drop you can watch them at these links: Episode 1; Episode 2; Episode 3.

Tsukiji Honganji Jidohanbaiki: These vending machines (jidōhanbaiki) are tucked around the side of Tsukiji Honganji. So proud are they of their location, the cladding has been designed to showcase the unique architecture of the Buddhist Temple itself.

NO! BLOCK | YES! OPEN: Here on Maction Planet, we are big fans of Japan’s train manners posters. Here’s one of the latest, which I spotted at Yoyogi Station. Don’t block the doors to allow people to smoothly get on and off the train! ‘Nuff said.

The end of FAKE Japanese Whisky: Japan’s whisky regulations are changing! What exactly do they mean, and why does it matter? Do they go far enough? What will be the impact for Japanese Whisky lovers and the industry? And what the hell is Japanese Whisky anyway? Find more in the latest video from Kanpai Planet, bringing you the world of Japanese drinks from the heart of Tokyo!