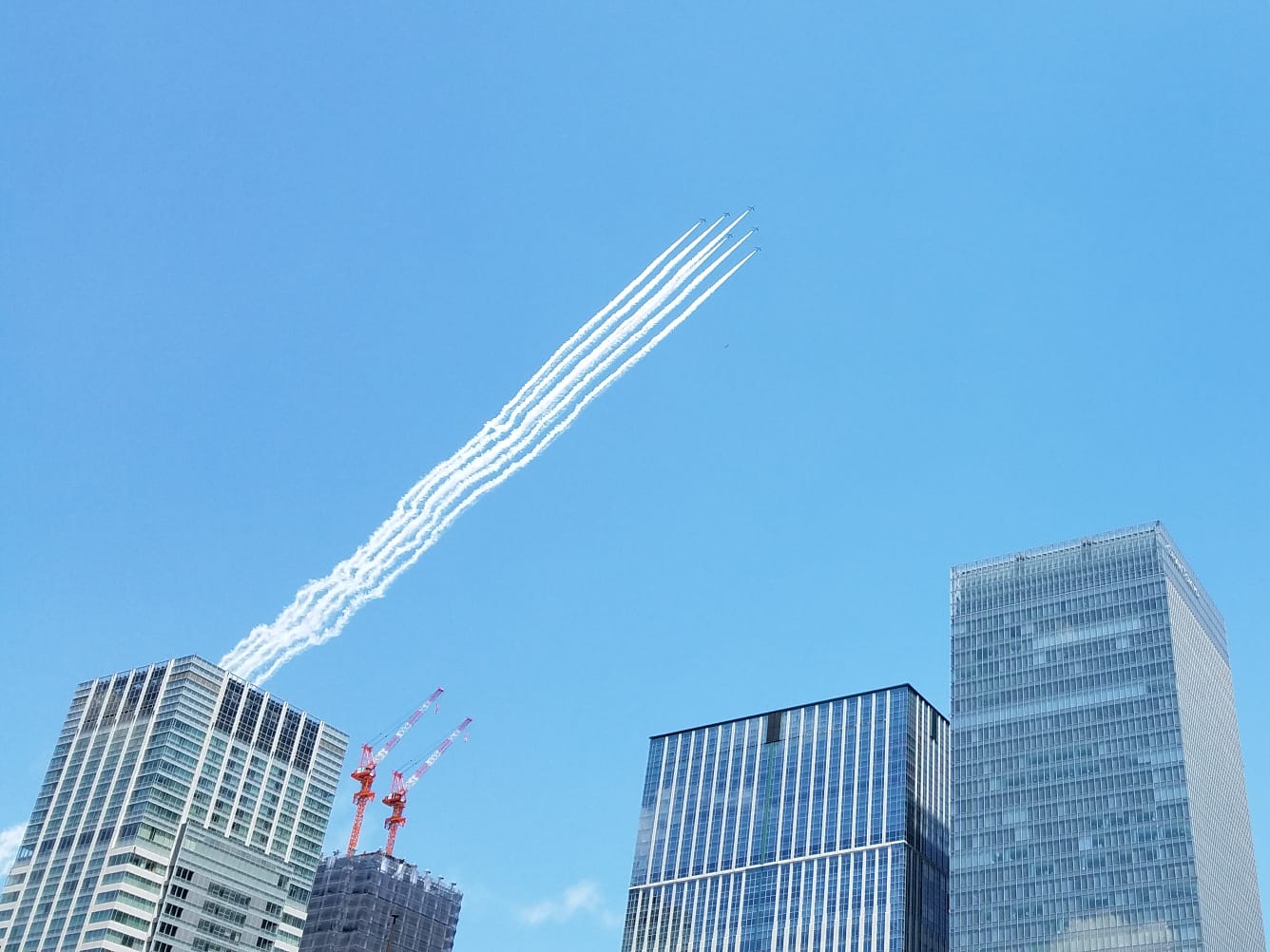 Our Founder and Lead Guide, Mac, shares his adventures watching Blue Impulse in an aerobatic edition of ‘This Week in Tokyo’!

Featured image, Header image and below – Blue Impulse: This week’s socially-distanced Maction-sanctioned walk took me to Tokyo Station. This was the spot I chose to watch Blue Impulse’s flyover over central Tokyo on Friday 29 May 2020. The Japanese Air Self-Defense Force’s aerobatics team performed a demonstration flight for 20 minutes over Tokyo in a show of respect to medical professionals at the forefront of the battle against the novel coronavirus COVID-19. Beginning at 12:40, six Blue Impulse fighter jets flew over the World’s Greatest Metropolis. Flying two figure-eight loops over the city, their route went over some of the hospitals that are treating COVID-19 patients. Given the name of the team, and the blue colouring on part of the bodies, the show was associated with the ‘Light it Blue’ campaign, which has honoured the efforts of medical workers by lighting up global landmarks in blue. The flyover was the first of its kind over Tokyo since 31 May 2014, when Blue Impulse came out to bid farewell to the old National Stadium, prior to it being demolished to build the new Olympic Stadium.

Blue Impulse were founded in 1960 and fly Kawasaki T-4s (since 1995). They are based at Matsushima Air Base, and have participated in the 1964 Tokyo Olympics, the 1970 and 1990 Expos in Osaka, the 1992 Nagano winter Olympics and the 2002 World Cup amongst many other prestigious events.

Seeing Blue Impulse fly over the skyscrapers of Marunouchi and the magnificent Tokyo Station building (more below) was an amazing experience. From this location, you could see the planes three times on each of their two loops. Coming across south-east from Itasbahi-ku towards the Tokyo Skytree, the main event as they came from Ueno across Tokyo Station and headed south, and then beyond the Imperial Palace as they headed north from Shibuya, over Shinjuku and back to northwest Tokyo.

I was interviewed by Emily Wang Fujiyama from the Associated Press about my thoughts on the display and the impact of COVID-19 on Japan tourism, a topic I have written about for The Tokyo Life. 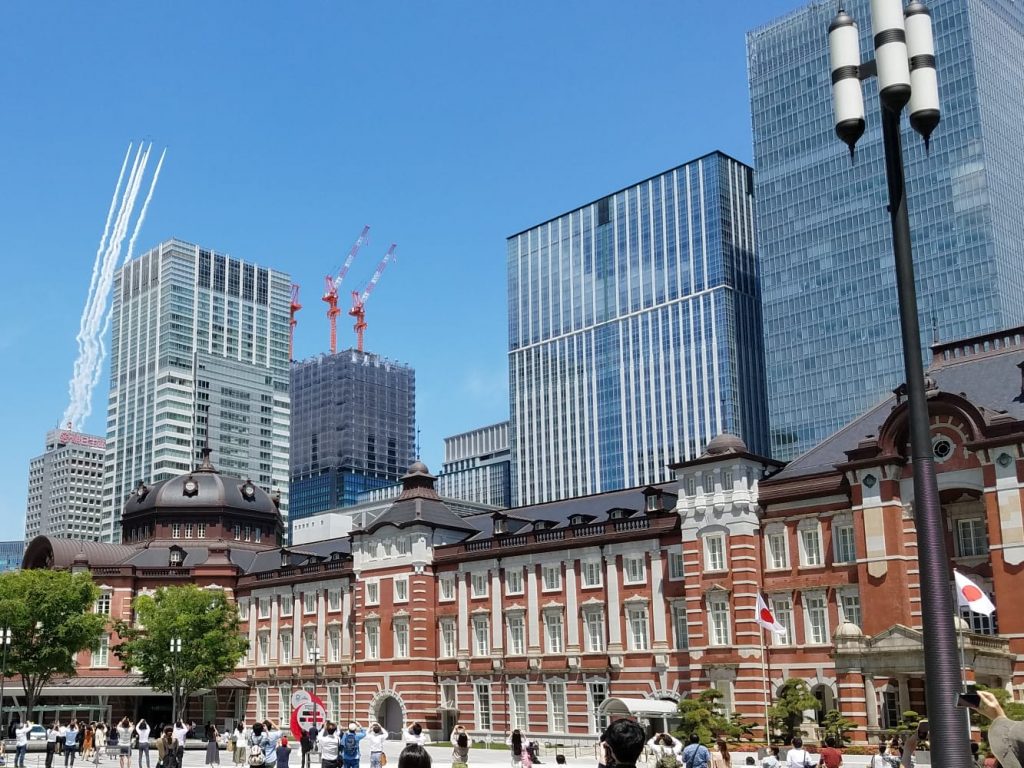 Tokyo Station: Tokyo Station, at least the Marunouchi side, is one of the iconic landmarks of Tokyo. It is the fifth-busiest in the JR East network measured by passenger throughput, but the busiest station in the country in terms of number of trains per day (over 3,000). It is served by the Shinkansen bullet train, many regional commuter lines of Japan Railways, as well as the Tokyo Metro network. In 1889, plans were drawn up for an elevated railway line to connect Tokaido Main Line terminal at Shinbashi to the Nippon Railway terminal at Ueno. In 1896 the Imperial Diet resolved to construct ‘Central Station’, a new station on this line located directly in front of the Imperial Palace gardens. The interesting thing is that this Central Station name didn’t stick, because other cities in Japan complained that this would imply that Tokyo was the ‘centre’ of the country. Which it is. But anyhoo, after delays in construction due to war work finally began in 1908 and the station, Tokyo Station, opened on 20 December 1914, with four platforms. The three-story station building was designed by architect Tatsuno Kingo (who also designed the nearby Bank of Japan building). The building is very western and would not be out of place in London or Holland – in fact, is often rumoured to be fashioned after Amsterdam Centraal railway station in the Netherlands. However, there is little evidence to support this. Much of the station, including the rooftop domes, was destroyed during World War II in B-29 firebombing on 25 May 1945. The station was rebuilt within the year, but with only two-stories and with simple angular roofs in place of the domes. Plans to demolish the building in the 1980s were luckily derailed (pun intended) by a preservation movement. The historic Marunouchi side underwent an extensive 5-year renovation which was completed in October 2012, restoring the station to its pre-war grandeur. 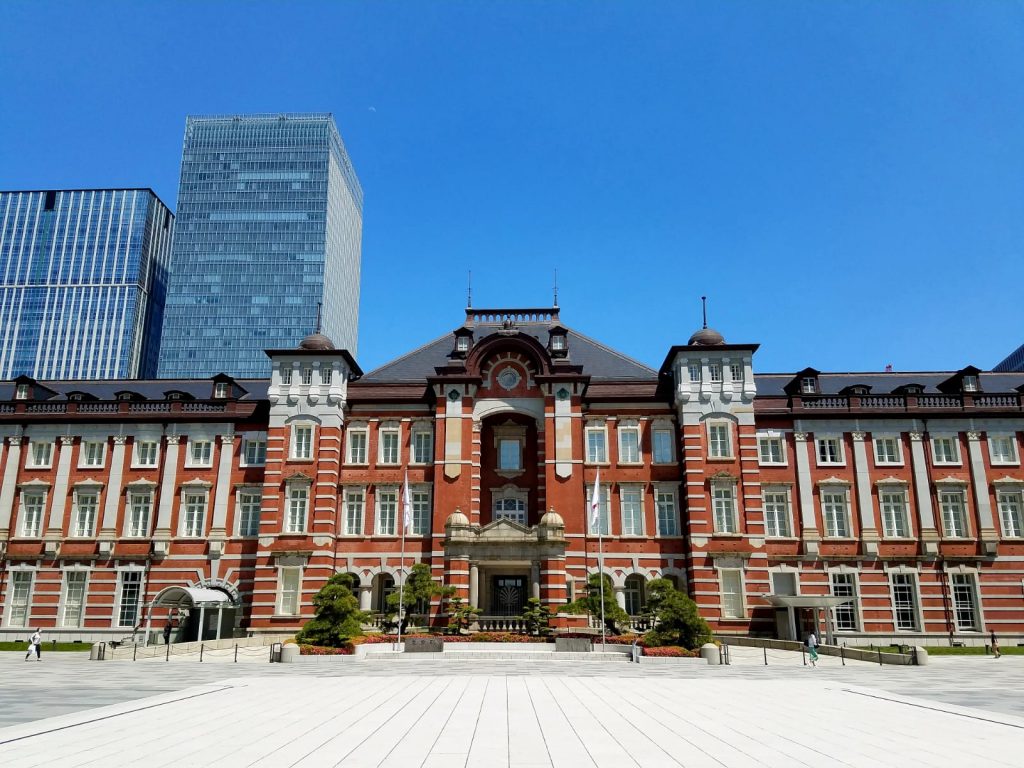 Here’s a photo of the inside of one of the station’s famed domes: 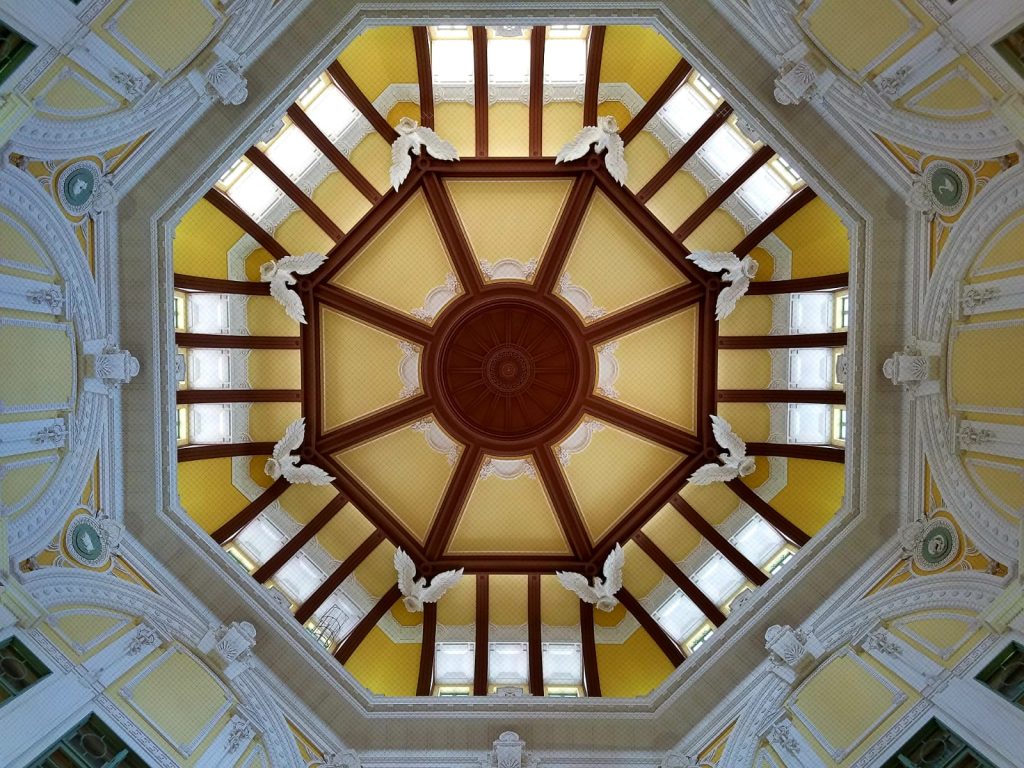 Tokyo Station was one of the stops in Episode #062 for Tokyo ON, the flagship radio show on Maction Planet Radio. I took listeners on a musical journey through the six major transit hubs of Tokyo’s JR Yamanote Line. You can listen below!

Olympic Countdown reset: The Tokyo 2020 Olympics and Paralympics has been postponed until 2021. This means that all the countdown timers have been reset to the new dates! 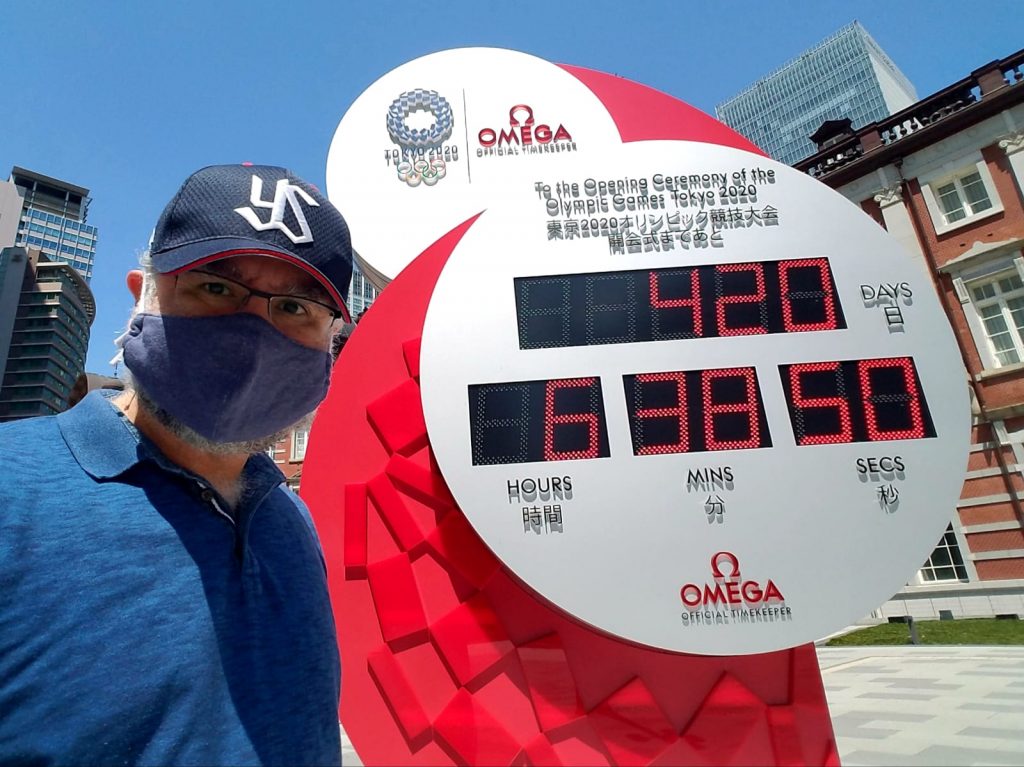