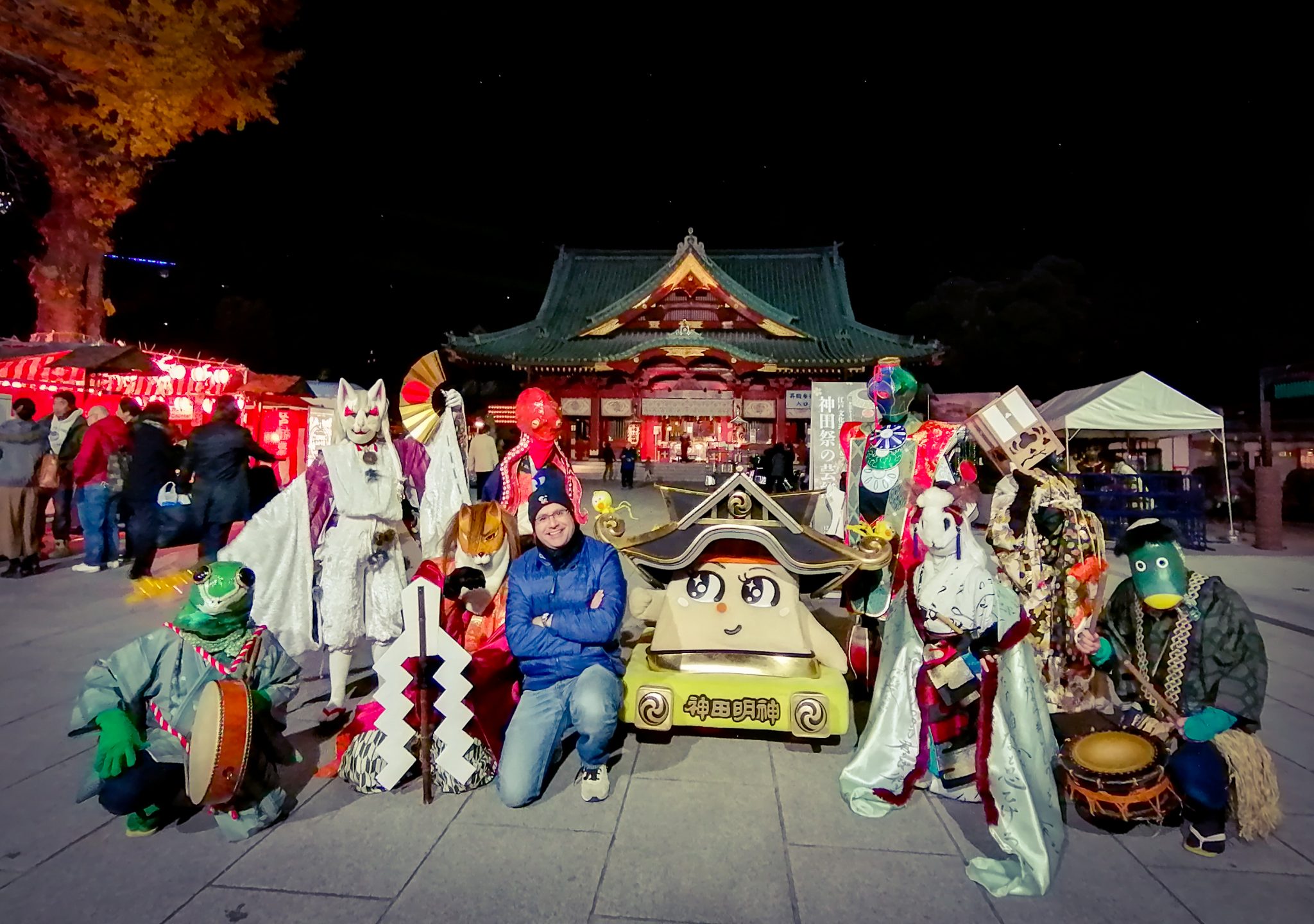 The latest edition of This Week in Tokyo – a review of the Maction Planet week that was and a look ahead to what’s coming up in and beyond the city. Check out photos from our tours and read insights into our explorations as we get under the skin of the World’s Greatest Metropolis, and beyond. This week: Kanda Myojin Edo Tokyo Yoichi Crew; Ren-G RWC Kimono; N-sta famous; Bring me the head of Lord Kira and Board Husband, Bored Wife!

Featured image – Kanda Myojin Edo Tokyo Yoichi Crew: “There was me, Mikosee, Foxy, Slappy, Bobbo, Fingers…” This is the cast of the Tokyo remake of Reservoir Dogs. Or, it’s Mac, our Founder and Lead Guide, with his new friends he made at the Kanda Myojin Edo Tokyo Night Market, including Kanda Myojin’s mascot Mikosee. It makes the Maction Planet team smile how insistent our guests are that they take photos of Mac in these types of situations! Mac’s guests Fei and Jing had an incredible time at the Oiran parade, dance show and making new chums as featured here! 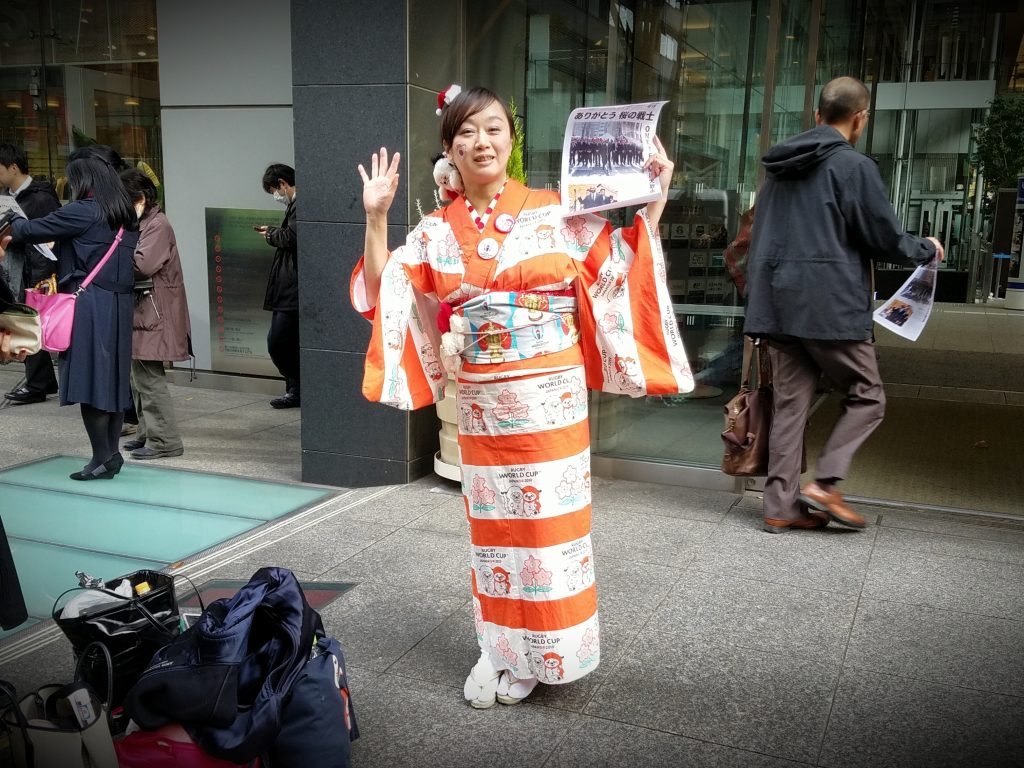 Ren-G RWC Kimono: 28 of the 31 members of Japan’s men’s national rugby team paraded through Marunouchi’s Naka-dori in Tokyo on Wednesday 11 December to express appreciation to their fans for their support during their historic run at Rugby World Cup 2019. You can join almost 3000 viewers (so far) and watch our coverage of the ONE TEAM Parade here and read more about in our article on the Maction Planet Blog. Mac and team were there to support the boys. One of the highlights was seeing the friends we made during RWC 2019 again, such as this lady who had made her own kimono out of RWC 2019 fabric featuring mascots Ren-G! 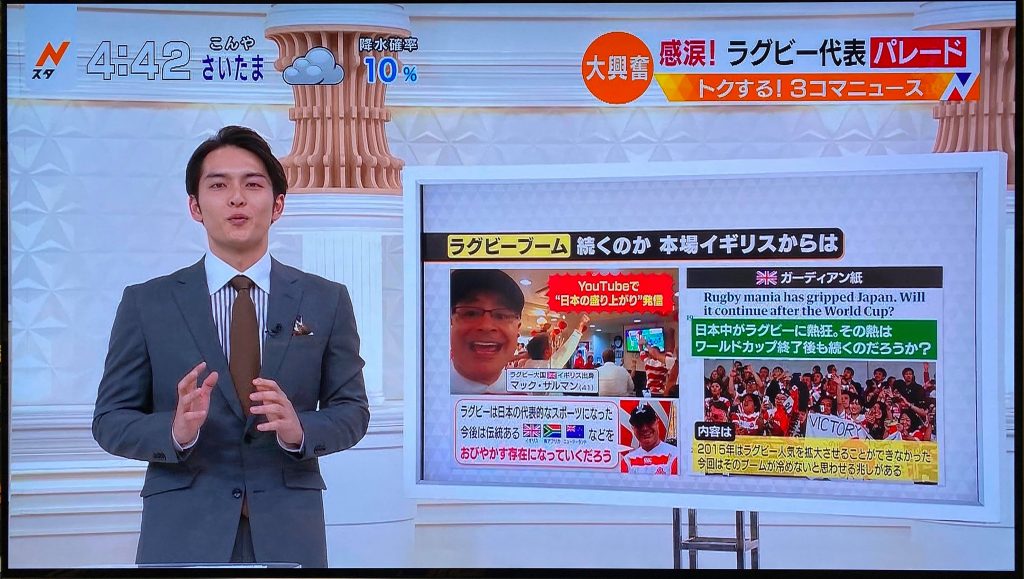 N-sta famous: Maction Planet is no stranger to fame. Many of our guests are A-list celebrities and politicians. Mac himself starred in the NHK World TV show Triangle Thrillers this year and he has appeared on CNBC, NHK, BBC and more and has been featured in The New York Times, The Japan Times, The (London) Times, Reuters, Bloomberg, CNBC, Forbes, The Financial Times and SNL, amongst others. So, it was no surprise when we turned on the TV to find Mac had infiltrated TBS’s flagship afternoon news show, N-スタ (N-Sta). He was interviewed at the aforementioned Rugby parade on his views for how to grow Rugby in Japan, and they used a still from his coverage of the Japan vs Samoa game, which he watched in a Chinese Restaurant in Chofu! 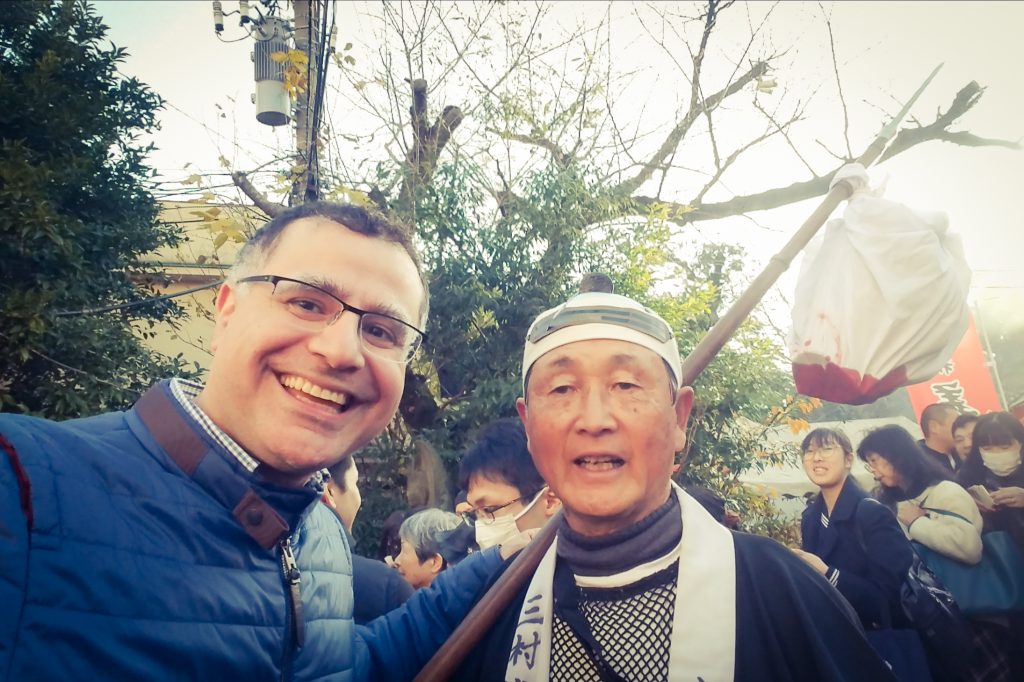 Bring me the head of Lord Kira: If you are a fan of Japanese history then you must have heard about the 47 ronin. The story of loyalty revenge is legendary. The real history behind it all can be found at Sengakuji, a quiet Soto Zen temple where the fallen warriors are laid to rest. It comes alive every December when it hosts the Ako Gishisai. A morning memorial service is followed by a parade, the Gishi-Gyoretsu, held in the afternoon which features 47 volunteers dressed up as the leaderless samurai, complete with the bloody severed head of Lord Kira (also in this picture!). Mac took his guests to enjoy the event and as always was able to secure them unrivalled access! 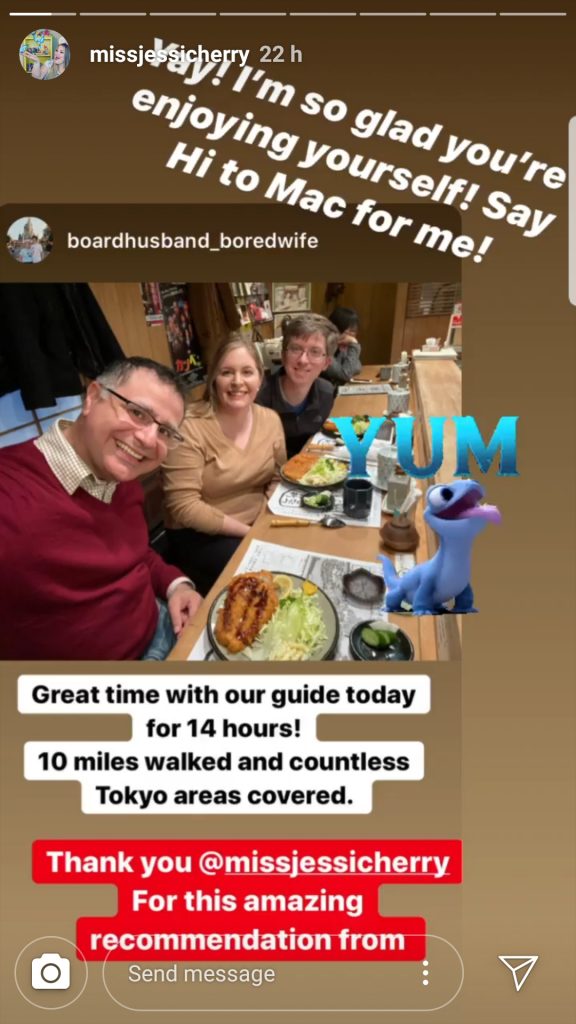 And finally – Board Husband, Bored Wife: Thank you to our guests Diane and Eric for sharing with the world the great time that they had with Mac, touring with him for 14 hours on Friday 13 December 2019. As you can see from their Instagram story, they thanked the person who recommended Maction Planet to them, Miss Cherry! We are blessed to received so many word-of-mouth recommendations from our guests and truly appreciate all the incredible support. Click on the links to follow Miss Cherry and Bored Husband, Bored Wife on YouTube… and while you are at it subscribe to the Maction Planet YouTube channel too!