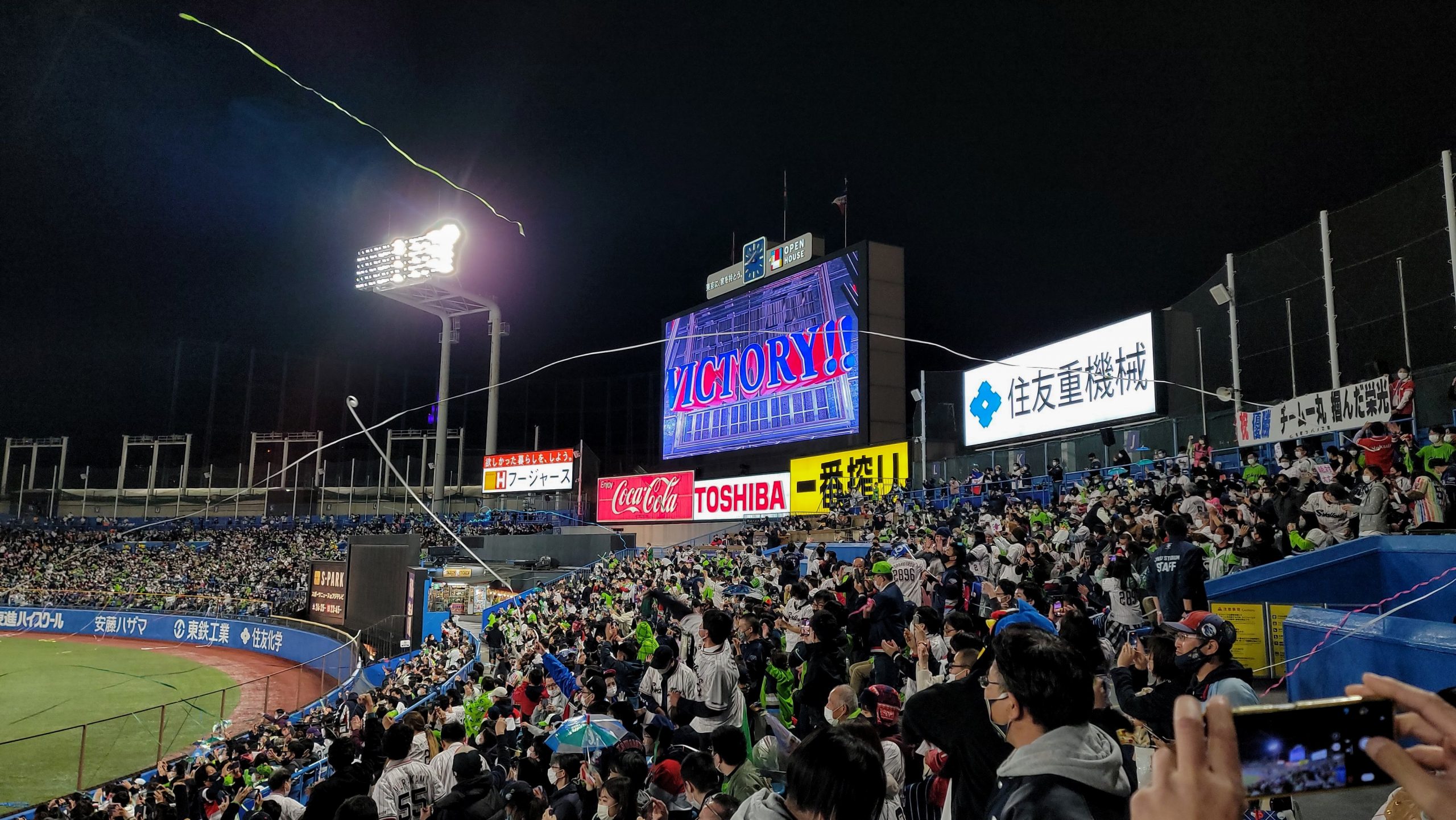 Welcome to ‘This Week in Tokyo’, a review of the Maction Planet week that was and a look ahead to what’s coming up in the city. Hosted by Mac, our Founder and Lead Guide, you can check out photos from our tours and read insights into our explorations as we get under the skin of the World’s Greatest Metropolis, and beyond! This week: Tokyo Yakult Swallows VICTORY; Twilight Ginkgo; Test Run Yamanote; Ardbeg Tokyo and Kanpai Planet on virtual tour.

Congratulations to the Tokyo Yakult Swallows and their fans on winning the Central League. This allowed us to progress to the Final Stage of the Climax Series playoffs, in which we played the Yomiuri Giants in a Best of Seven encounter with all games held at Meiji Jingu Stadium. Home advantage was not the only reward for winning the league – we also began the series with a 1-0 lead. This meant that two wins and a draw were enough to clinch the series victory on Friday.

That was the moment that this photo was taken, with Swallows fans experiencing a 50:50 mix of shock and awe. As a Swallows fan of 15 years, going to Jingu on average 30 times a year during that period, I know the feeling!

Next stop, the Japan Series against Pacific League champions ORIX, which begins on Saturday 20 November! We continue…

Twilight Ginkgo: Tokyo’s most populous tree is the Ginkgo, and they’ve started turning their magnificent golden colour, as they are want to do in the autumn. Tokyo’s most famous Ginkgo viewing spot is Icho Namiki in Jingumae. This Ginkgo-lined street has been the backdrop for many a TV drama scene. My favourite time to visit is around twilight. Very beautiful, but the trees have not yet reached peak goldenness, so you still have time to catch their magnificence!

Test Run Yamanote: It’s not often one sees a Yamanote Line Test Run train. When I do, it makes it into ‘This Week in Tokyo’.

Ardbeg Tokyo: On Saturday I enjoyed a great whisky tasting event at Madorigal in Ginza, the spiritual home of Ardbeg in Tokyo: An Ardbeg drinkthrough involving 7 of their core range, hosted by Brand Ambassador Bob Stockwell. A top evening of epicurean experiences, new friends and much more. Kanpai and Slàinte Mhath! You can check out more photos from the event on the Kanpai Planet Instagram. While you’re there, why not give it a follow!

Kanpai Planet on virtual tour: A couple of new media appearances for fans of Kanpai Planet to check out. Listen here to the Now and Zen podcast with Andrew Hankinson, in which we discuss Japan life and entrepreneurship while drinking and expounding upon three Japan-related Tequilas. Below, check out my guest appearance on ‘Behind the Camera’, hosted by UK-based WhiskyTube channel New Dram Drinker, where a group of WhiskyTubers and Distillers discuss life behind the scenes of our respective projects.