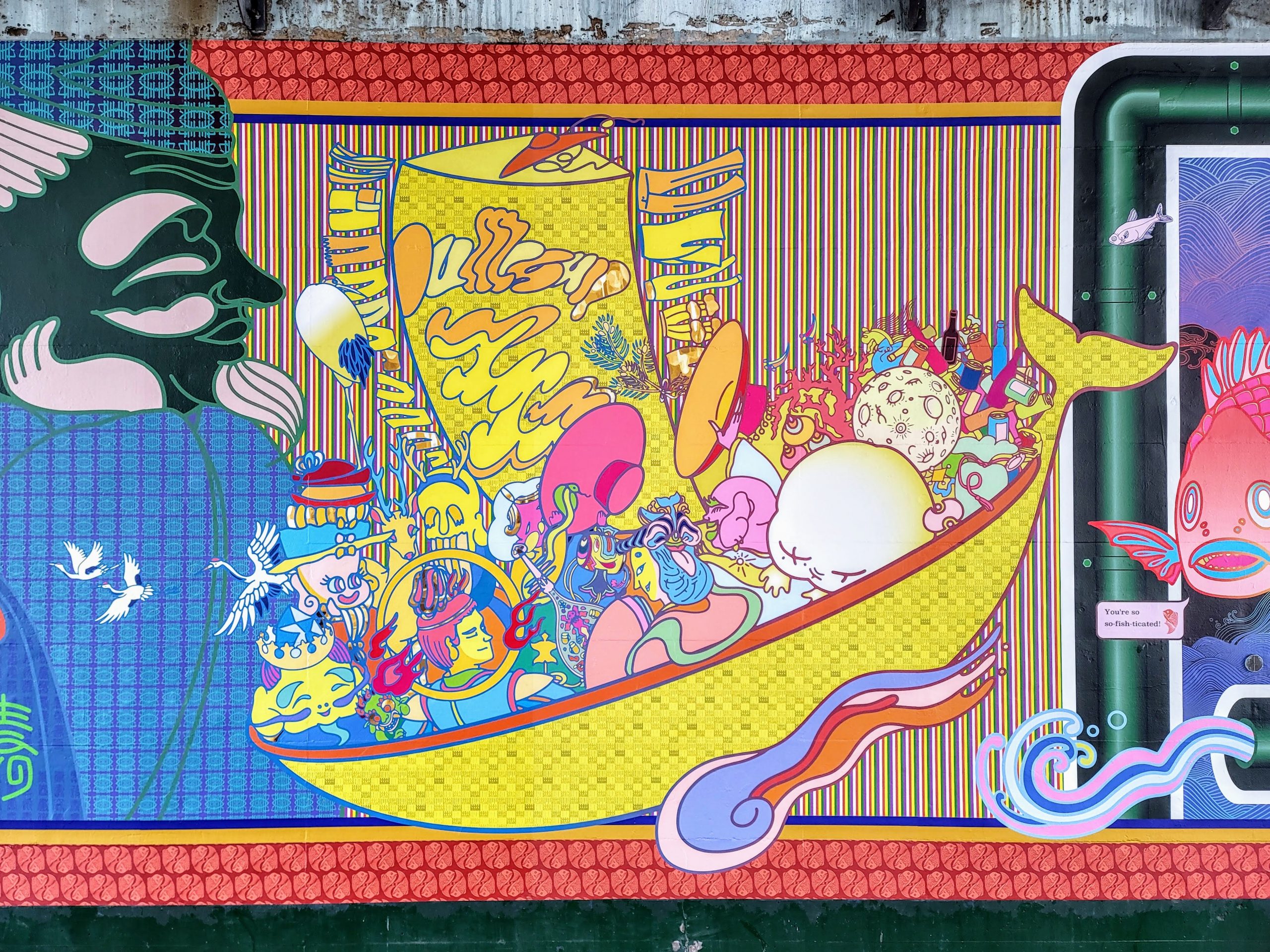 Welcome to ‘This Week in Tokyo’, a review of the Maction Planet week that was and a look ahead to what’s coming up in the city. Hosted by Mac, our Founder and Lead Guide, you can check out photos from our tours and read insights into our explorations as we get under the skin of the World’s Greatest Metropolis, and beyond! This week: Ebisu mural renewal; Sake Lovers pop up; North of Tokyo Trophy Sake Tasting; Ghosts and other spirits and MP YT 10K!

Ebisu mural renewal: I first featured the mural under the train tracks in Ebisu on the Maction Planet social media way back here!

Recently, a new mural has risen to take its place! This is one of my favourite sections – a stylised representation of the seven lucky gods in their takarabune (宝船) treasure ship!

Sake Lovers pop up: My friends at Sake Lovers and Sake Communication hosted a pop-up sake store from 27 June until 10 July at Nakano Marui. They were joined by kurabito from six sake breweries, including the legendary Hinoshita-san, the Toji from the Amabuki sake brewery in Saga. The last time he personally manned a sake tasting booth was 25 years ago.

Previously, Hinoshita-san used to work at Murashige Shuzo in Iwakuni where he became one of the youngest ever Toji before moving to Amabuki. He became nationally famous after appearing on the Sasuke ninja warrior TV show. To aid his training, he had his own gym inside the brewery – at both Murashige and Amabuki! I am holding his iconic red Hinoshita Musou (日下無双) bottle. Musou means unparalleled or unbeatable. Of course, I had to grab one!

Thank you to Yuki from Sake Lovers for her hospitality.

Attendees got to try 6 prize-winning sake from three prefectures just north of Tokyo – Gunma, Ibaraki and Tochigi. All the sake had received international recognition at the IWC and Kura Master awards.

Two Tochigi breweries did especially well: Tonoike Shuzoten in Mashiko won the 2022 Kura Master President’s Award with its Sanran Junmai Daiginjo, made with Tochigi Yumesasara rice and Inoue Seikichi in Utsunomiya was crowned 2022 IWC Champion for its Sawahime Ginjo, made with local Hitogokochi rice. A solid performance for terroir which I discussed with Inoue’s Tamotsu Sato (left) and Tonoike’s Shunsuke Tonoike (right).

Thank you to Angus, Cindy and Marta from Nearby Tokyo as well as all the breweries for a fantastic evening.

Ghosts and other spirits: I ain’t afraid of no ghost… but I am somewhat impressed when faced with a series of them!

That’s exactly what happened on Saturday at Aloha Whisky Rising. Hosted by Whisky Rising author Stefan Van Eycken and Aloha Whisky owner David Tsujimoto, lucky attendees were able to sample six of Stefan’s Ghost Series bottlings, as well as a 25-year-old Clynleish and three secret drams – a 39yr Glenglassaugh from 1973, an Edradour 10-year sherry bomb from 2011, and something so secret I can only reveal what it was in one year’s time!

When I started the channel I never conceived of where it would go. In the 5 years it has been around I’ve made videos about festivals, theme parks, food, drink, history, culture, music, comic cons, auto shows and more… and the annual Tokyo Yakult Swallows Platinum Crew unboxing!

The channel first gained widespread exposure during the Rugby World Cup 2019 when my vlogs achieved national TV coverage. The next leg up was my video showcasing Super Nintendo World at Universal Studios which I dropped as soon as the press embargo was lifted. Last but not least, the reaction video to my appearance on the Trash Taste cooking special has been the latest video to go viral.

6 videos currently have over 100k views apiece. Not bad considering that guiding, travel planning and travel and drinks consulting are my main lines of work.

Our YouTube presence grew last year to now include Kanpai Planet, my channel focusing on the world of Japan’s drinks.

If you don’t already, head over to YouTube and give them a follow at youtube.com/mactionplanet and youtube.com/kanpaiplanet

Thank you to all my viewers for their support. As I say at the end of (almost) every video, “We continue…”