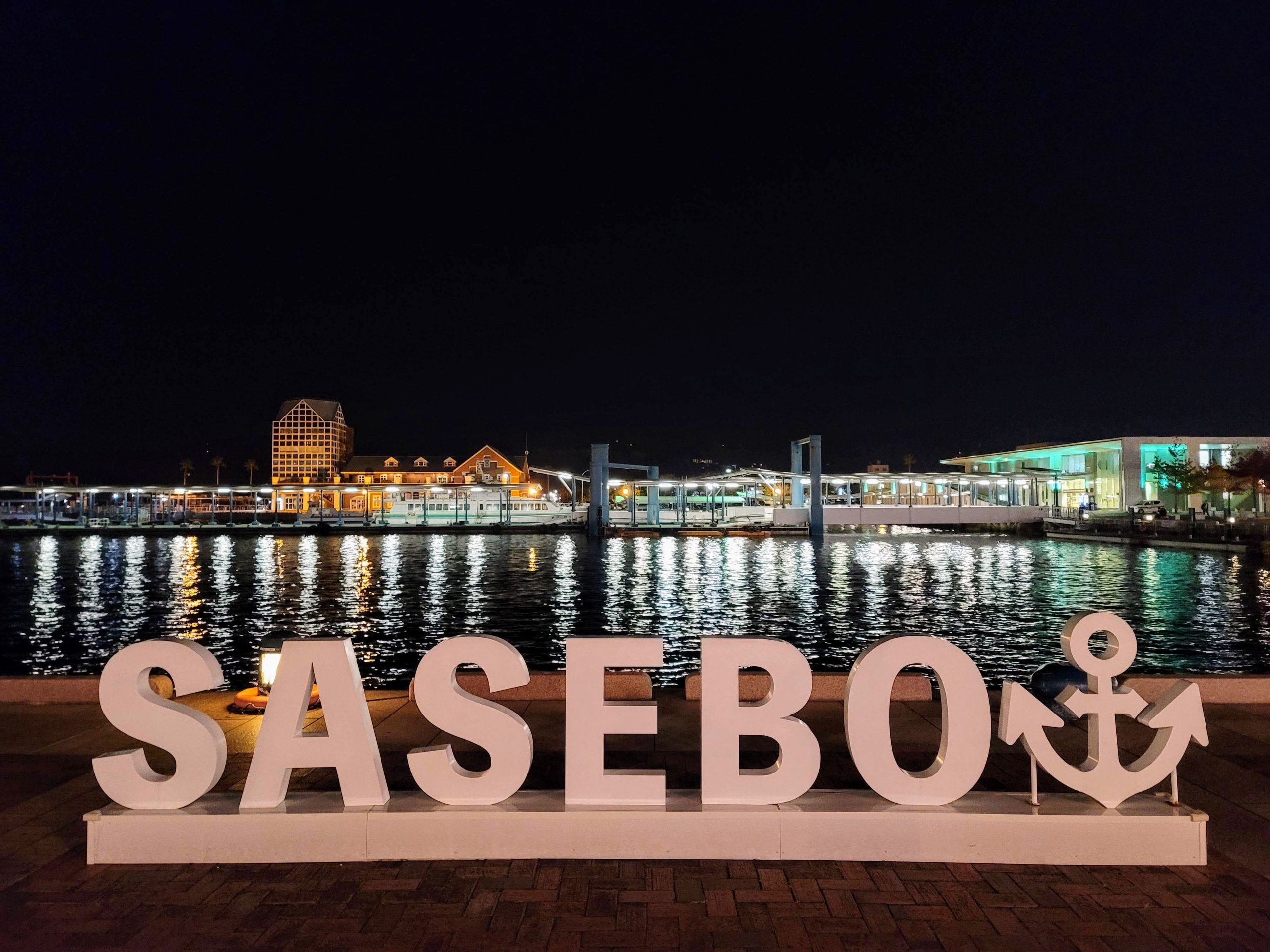 It’s been another cross-country week on Maction Planet. In this week’s edition of ‘This Week in’, I’m showcasing Sasebo in Nagasaki Prefecture. I was there on a travel consulting mission, to help improve the tourism offering in the area. If you’re reading this and we can help you and your region, get in touch!

Sasebo (佐世保) is the second-largest city in Nagasaki Prefecture. Once a humble fishing village controlled by the Hirado Domain, things changed after the start of the Meiji period (1868-1912). Around this time Heihachiro Togo, Admiral of the Imperial Japanese Navy, founded Sasebo Navy District in 1886. It remained a major Japanese naval base until the end of World War II.

Sasebo City as we know it today was founded on 1 April 1902. Sasebo was one of the original 17 possible targets for America’s atomic bomb, and suffered heavy damage during World War II. After the end of the war, the United States Navy took over part of Sasebo base and formed ‘U.S. Fleet Activities Sasebo’ in 1946.

The American influence has left its mark on the city, not least in its signature cuisine – the Sasebo Burger. There are outlets selling them all over the city, but the best way to enjoy one is surely to have one cooked for you after sea kayaking to a beautiful uninhabited island in the Saikai National Park.

One of these islands is Kuroshima. Kuroshima’s history is absolutely fascinating. In the nineteenth century, some of the ‘Hidden Christians’ around Nagasaki, whose beliefs were outlawed by the Tokugawa Shogunate, found out that migration to Kuroshima was encouraged by the government, who wanted to redevelop former farmland. They co-existed with the villagers, praying to a statue of the Virgin Mary made like Kannon (the Goddess of Mercy) at the Buddhist temple that they ostensibly belonged to, and secretly maintained their Christian community.

After the lift of the ban on Christianity, they returned to Catholicism and built a church – Kuroshima Catholic Church – in the centre of the island, which is now registered as a World Heritage Site – one of the “Hidden Christian Sites in the Nagasaki and Amakusa Region”.

This amazing island is where I met Yuki, the incredible owner of Cafe Misaki. As well as running the cafe, she also bottles Kuroshima Mineral Water on-site from an underground well source 100m deep… water that is used to make Imo (Sweet Potato) Shochu which is only sold in her shop. The sweet potatoes used are grown on Kuroshima.

Yuki asked for a photo, so here we are! Kanpai!

The Tawagaura Peninsula is located in the northern part of Nagasaki Prefecture and separates Sasebo Bay from the open sea (Goto-nada). That’s where I got to pick sweet sweet mikan (satsuma oranges). I also experienced wood carving and manju making. There is so much to be uncovered across the Sasebo region.

As always, it’s the people that make a place. Back in the city, I met Takaaki, owner of Beer Bar Gustare. In this photo he is introducing Yokitsuki Reigetsu from local sake brewery Umegae. Released in October 2019, it’s a craft gin with a sake base, flavored mainly with fruits grown in the prefecture. Beer Bar Gustare is a must-visit for drinks fans who find themselves in Sasebo. I went for the beers, and stayed for Gustare’s impressive selection of whisky and gin, curated and served by the inimitable Takaaki. All the best to this legend in his quest to open his own brewery.