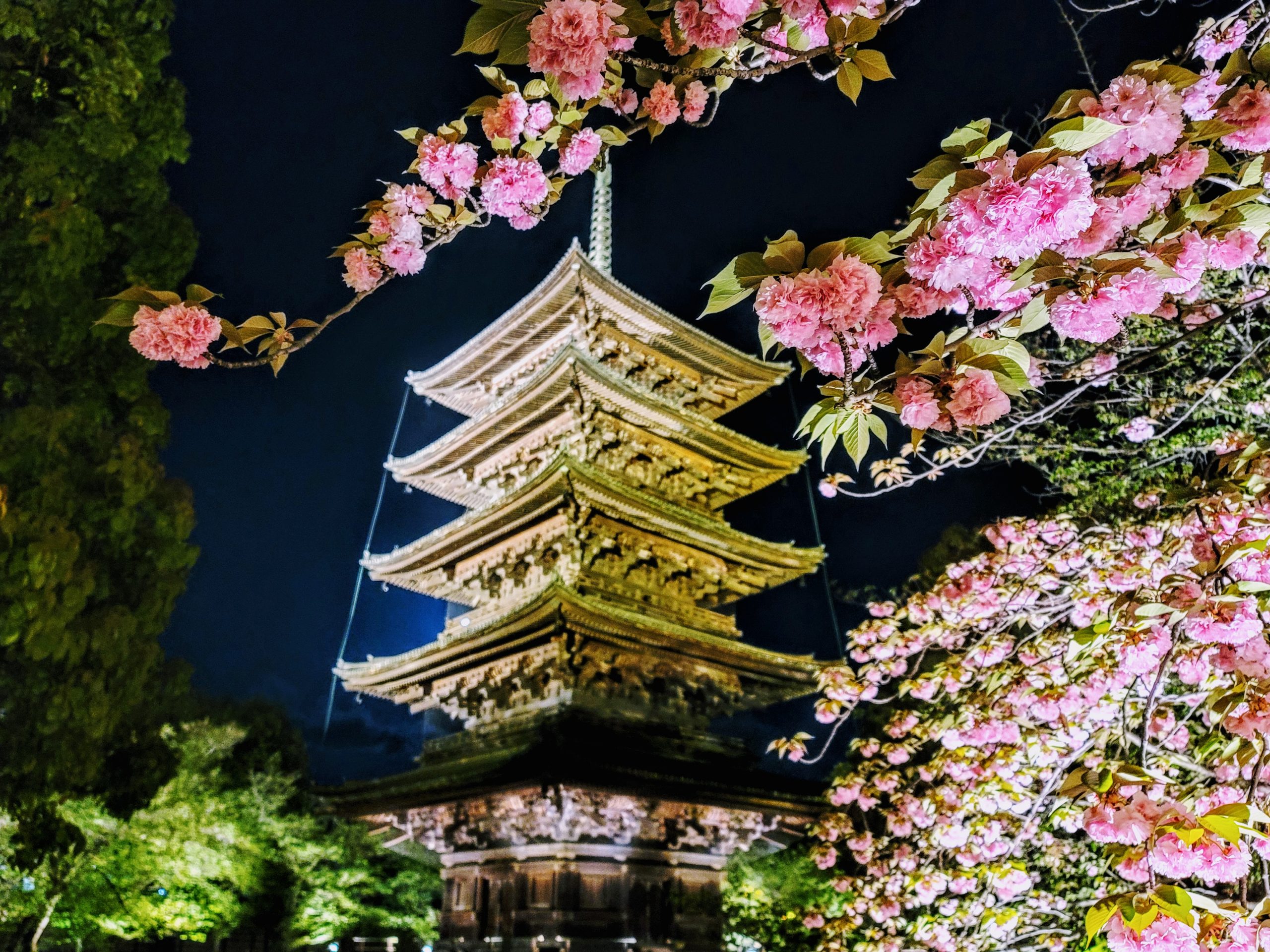 Konnichiwa from Kyoto! This week, I’ve been mostly enjoying the Cherry Blossoms in Japan’s former capital. What’s that you say? Cherry Blossom season is over? Check out these photos and decide for yourself.

The association between Cherry Blossom season and the Somei Yoshino varietal is so strong that to many people hanami – flower viewing – is all over once their petals fall. That’s not the paradigm on Maction Planet. Check out some of my favourite Kyoto Cherry Blossoms here!

Featured image – Toji: UNESCO World Heritage-listed Toji (東寺), literally meaning ‘East Temple’, was founded in 796, two years after Kyoto became the capital of Japan. Together with its now-defunct sister temple Saiji (‘West Temple’) they were the guardian temples of the city, flanking its southern entrance.

Toji’s five-story pagoda was originally erected in 826. It’s the tallest wooden pagoda in Japan, 57m high. The present pagoda was built by Tokugawa Iemitsu in 1644, and is the fifth one to stand on the spot.

We’re big fans of light-ups here in Japan, and around Cherry Blossom season every year Toji gets the after-dark treatment.

Toji has a special place in my heart connected to my Japan origin story, but that is a tale for another time!

Naked Flowers: Across town, another light-up was taking place at another of my favourite Kyoto spots – Nijo Castle. This time, the city had enlisted Naked Inc. to help showcase the castle and its gardens at nighttime. The amazing lightscape meant you could capture shots like these of the gardens’ ample Yaezakura – the multi-layered cherry blossoms which typically bloom later than the more-famous Somei Yoshino trees.

Omuro at Ninna-ji: Kyoto’s Ninna-ji Temple – another of the numerous World Heritage sites in the city – is home to 500 Omurozakura. These short-trunked, larger-petaled, late-blooming trees are absolutely stunning, and frame Ninna-ji’s pagoda beautifully.

Located in Ukyo-ku, Ninnaji is the head temple of the Omuro school of Buddhism’s Shingon sect. It was founded in 888 by Emperor Uda to fulfil the will of his predecessor, Emperor Koko. Following his abdication, Emperor Uda took Buddhist orders, and had an omuro (residence) built on the temple grounds for himself to live in. It is because of this structure that the temple is also known as Omuro-gosho, the Omuro imperial residence. This has given its name to this variety of Cherry Blossom!

Shidare at Heian Jingu: Heian Jingu was built in 1895 to commemorate the 1100th anniversary of the capital’s move to Heiankyō, now known as Kyoto. The shrine buildings are 5/8-scale replicas of the original imperial palace structures. The complex is dedicated to the emperors Kanmu (737–806) and Kōmei (1831–67). Visitors can stroll through the gardens, which are dotted with ponds and 300 magnificent flowering cherry trees representing 20 different varieties, including 150 weeping cherry trees known as yaebeni shidare-zakura.

Petals on the Philosopher’s Path: The Philosopher’s Walk is a path that follows a cherry-tree-lined canal running between Ginkaku-ji and Nanzen-ji. It first opened in 1890 and was extended again in 1912. The majority of trees along the way are Somei Yoshino, meaning that when the flowers fall you get an incredible carpet of cherry blossom petals along the canal. Absolutely stunning!

Kyoto Cherry Blossoms are absolutely magnificent, even after the Somei Yoshino petals have fallen. You just have to know where to look!