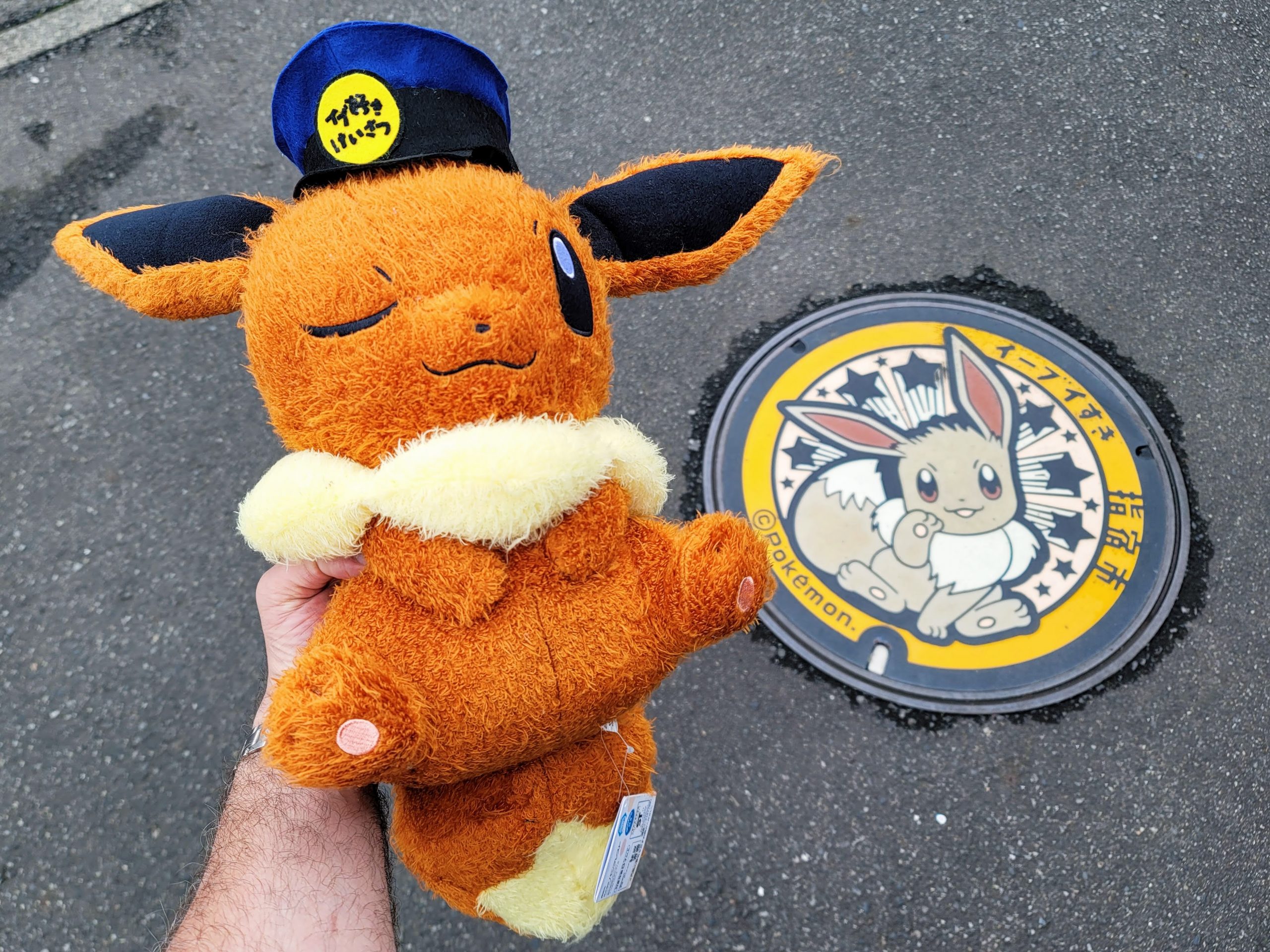 I’m back in Kagoshima after seven months, and it feels so good! This time, I was able to see much more of the prefecture itself, and my adventures in each location would be enough to fill an episode of ‘This Week in’ by themselves, with incredible experiences, delectable food and amazing people. I have had to be especially ruthless this week in distilling it all down to five photos. HERE WE (ka)-GO!

Featured image – Ibusuki: Ibusuki is famous for its Black Sand bathing. These sands, warmed by the local volcanic hot springs, are said to have healing properties. The town is now more recently on the otaku map for its nine Eevee Poké Lids utility hole covers. Unveiled on December 20, 2018, they feature various Eevee evolutions. Eevee was chosen to represent Ibusuki as the city’s name sounds like “Eevee suki” – We love Eevee! Eevee is also the city’s ambassador for sports and culture.

The utility hole cover featuring Eevee is right outside JR Ibusuki Station, and a local police station. The latter has an Eevee plushie on the counter – complete with a hand-made police hat – which if you ask nicely will enhance your photo like so! I love Eevee and Ibusuki!

Hioki: It wouldn’t be a visit to Kagoshima without stopping off at the Kanosuke Distillery. I was honoured to get some pretty VIP treatment, which will help inform the next Kanosuke whisky reviews which you will see on Kanpai Planet. I also got a chance to personally congratulate CEO Yoshitsugu Komasa (right) on Kanosuke’s success at the World Whiskies Awards 2022. I have reviewed all three of these whiskies on Kanpai Planet, curated in this playlist here. Thank you to Finance and Production Director Tatsuya Ishihara for the fantastic tour.

Miyama: Down the road from the Kanosuke Distillery is the famous Satsumaware pottery producing town of Miyama. The area is dotted with around 30 craftsmen’s studios within walking distance of each other, making for a pleasant stroll through town. One of the most renowned is the Chin Jukan Kiln, currently in its 15th generation – that’s over 420 years – of continuous pottery production! The kiln produces a wide variety of distinctive yet traditional Shiro Satsuma and Kuro Satsuma works ranging from everyday items to tea ceremony instruments. I made practical use of a couple of these beautiful pieces with some tea and cake in their beautiful cafe.

Chiran: Chiran is a beautiful town in the centre of Kagoshima Prefecture, famous for two main things: its Peace Park and Peace Museum, which focuses primarily on the tokko (better known overseas as the kamikaze), and its Samurai Gardens, which are a ‘Nationally Designated Cultural Asset and Scenic Spot’. This is the garden of Sata Naotada. Believed to have been created during the Kampo Era (1741-1744), this garden looks particularly beautiful from the clanhead’s room (which I have my back to) as the rock-made miniature hill matches well with the “borrowed” natural scenery behind it.

Kagoshima City: At the end of the day people make places… and this photo sums up my time in the capital of this diverse and underappreciated prefecture. Shochu is a huge part of the economic and social fabric of Kagoshima Prefecture, and I am honoured to be in the company of this group of individuals who in their own way are doing so much to promote Japan’s indigenous spirit to the world.

Kanpai, and We continue…