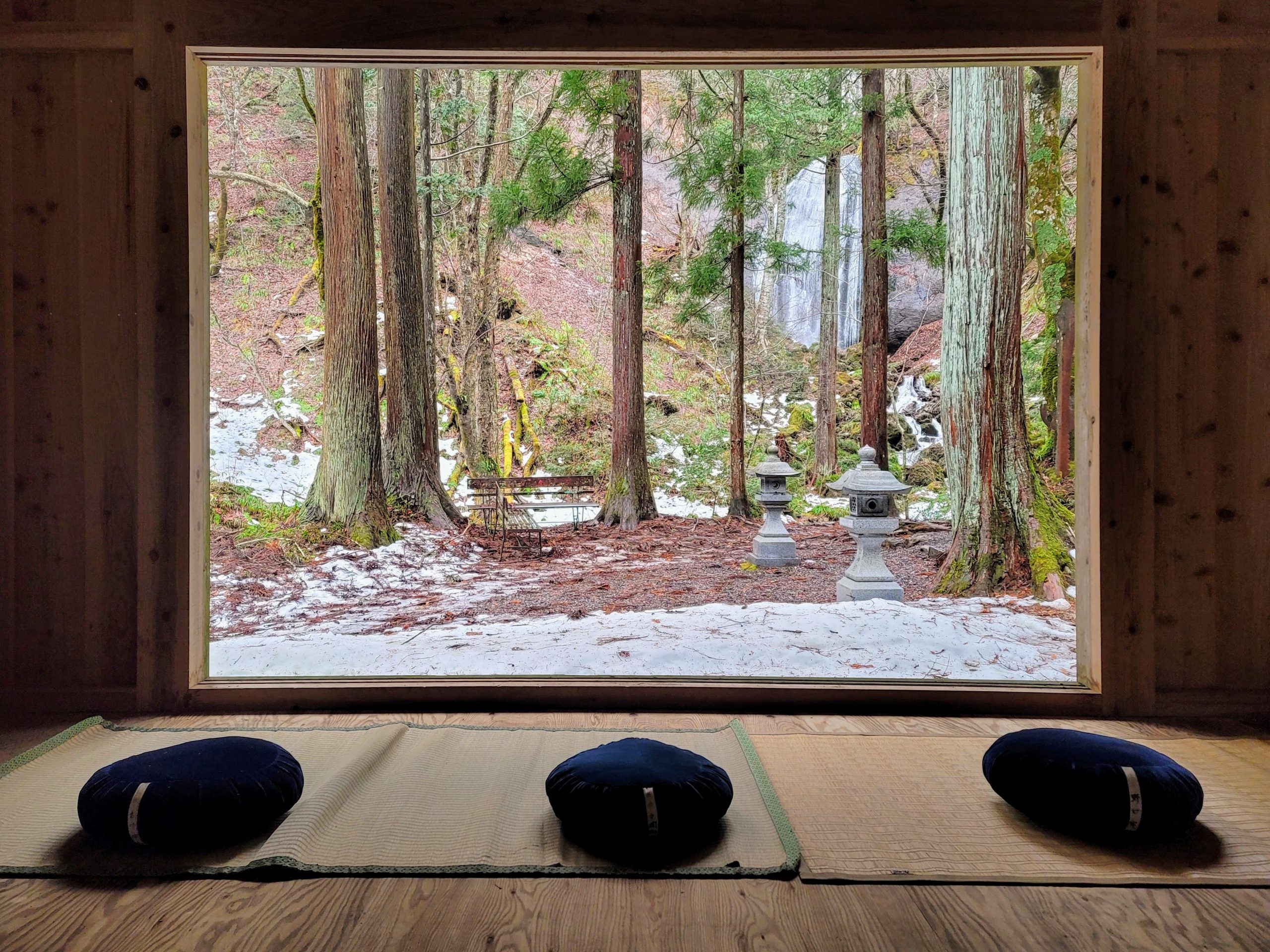 This week, I was invited to consult on developing tourism projects in Aizu Wakamatsu (会津若松) in the heart of Fukushima Prefecture! Learn more about this historic town and its majestic environs in this week’s ‘This Week in…’

As Maction Planet guests know, no time is wasted on our bespoke Japan tours, so I felt right at home when we drove straight from Koriyama station to the Tatsusawa Fudo Waterfalls to practise some Zazen mediation. The falls – the Odaki and Medaki falls – are part of the Fudo River that originates in Mt. Funamyojin in the Adatara mountain range. You can view them from an observation deck and also walk down to the riverbank and approach the edge of the waterfall. The waterfalls are surrounded by a beautiful virgin forest – so beautiful in fact, that the Tatsusawa Fudo Falls and Tatsusawa virgin forest have been selected for inclusion in the ‘Fukushima Midori no Hyakkei’ (100 selected areas of scenic greenery in Fukushima).

Next to the falls is a small building, owned by a local temple, which can only be opened under special request. In that, facing the falls (see featured image), that I practised Zazen meditation under the tutelage of a priest. Sat down cross-legged facing the waterfalls and clearing the mind, it was a phenomenal experience.

Wappameshi makes for a great local lunch. It’s steamed rice with a variety of toppings, served in a bowl made from a thin sheet of curved wood, a ‘wappa’, which was used as a lunchbox by woodsmen in ancient times. A restaurant owner in Aizu came up with the idea of filling a wappa container with a colourful mix of seasonal food to sell as an original dish, wappameshi. The simple, down-to-earth feel of the container matched perfectly with the food it held, and wappameshi quickly spread to become one of Aizu’s standard dishes.

One of the best places to enjoy this dish is at Takino, the pioneers of wappameshi. The restaurant is housed in the former Edo-period Aizu western road Itozawa rest house. This was moved to its current location and the restaurant opened in it. The central pillar and the ceiling beams of the building still bear the scars of the Boshin War-  戊辰戦争 – fought from 1868 to 1869 between forces of the ruling Tokugawa shogunate and those seeking (nominally) to return political power to the Imperial Court.

The Aizu clan remained loyal to the shogun even after the power shifts in the Meiji Revolution. leading to battles of the Boshin War being held in the area. We visited some of the off-the-beaten track sites associated with the war, learning the tragic stories of Japan’s revolutionary era. Here I am in one of the trenches dug during this period, looking out for the ‘enemy’.

Aizu is known for its samurai traditions. The Nisshin-kan School, founded in the early 1800s, was Aizu’s hanko – a school for educating the sons of samurai, reputed to be the best of Edo Japan’s numerous hanko in terms of both scale and academic content. The male children of Aizu samurai retainers entered the school when they turned 10 and were taught the martial arts and discipline required to become true samurai. They were taught the Ten Rules of Conduct that ended with the phrase “Do not do what you must not.”

Guests to the area can feel the Aizu samurai spirit through a number of sites and experiences in the area, including participating in a Kendo lesson and meeting these guys!

Lake Inawashiro is Japan’s fourth-largest lake, with Mt. Bandai towering to its north. You can around journey around this beautiful lake in the Hakuchou-maru, the swan boat to end all swan boats. The turtle is under renovation to turn it into a private rental space for dinner cruises, sake tastings, yoga classes and much more!