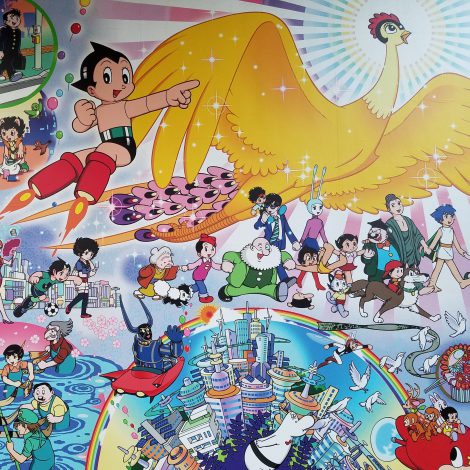 We love starting off the day posting uplifiting images from The World’s Greatest Metropolis, as seen on Maction Planet Tokyo Tours, on our Instagram and Facebook pages – check out these pictures of Ebsiu-sama and the sweeping train tracks at Uguisudani for some examples.

Recently, we led off with the positivity of mangaka Osamu Tezuka and his legendary creations Astro Boy, Phoenix, and more – as seen on the incredible mural in Takadanobaba (Baba to its friends). We recieved a lot of incoming queries about the post, and requests from guests for “Backstreets of Takadanobaba” tours, so we thought we’d expand on our Instagram post and discuss why Tezuka and Takadanobaba are so intimately connected through his most famous creation, Astro Boy.

So… why is this incredible piece of art in Baba? Because, on April 7, 2003, that’s where Astro Boy was born! He was created by Dr Tenma to replace Tobio, his son, who had died in a car accident. In the real world (sorry to have to bring us back to it), Tezuka created Astro Boy in 1952 and spent a lot of his life in Baba. He was born there on November 3rd, 1928. Tezuka Productions had their office in the Seven Building from 1976-1988.

The first mural was completed in April 1998 – the idea having first been proposed in 1993 by the Takadanobaba West Shopping District Promotion Association. Due to renovation work at the station, the mural was actually removed in 2005 and relocated under the train tracks on the Mejiro side of the station in March 2008, side by side with the a new Tezuka-inspired mural.

By the way, the fact that Astro Boy was born in Takadanobaba (or rather, assembled at the Ministry of Science located there), and that the area later ended up housing Tezuka’s office, is completely coincidental!

The area’s love affair with Astro Boy, or Tetsuwan Atomu as he is known here, has led to some interesting initiatives. In 2004, on his first ‘birthday’, Astro Boy currency was introduced! Measured in horsepower, the unit of measurement of Astro Boy’s strength, one horsepower was the equivalent of ¥1. The currency was offered in exchange for volunteer and environmental activities, such as reusing a shopping bag (10 horsepower).

One particular initiative has had somewhat more staying power. Our guests often comment on how they love the “train jingles” which signal train departures on the JR trains in Tokyo. In the past, a bell and then an electric buzzer were used. In 1989, the first jingles were introduced at Shinjuku and Shibuya stations. Well, in April 2003 – Astro Boy’s ‘birthday’ month, Takadanobaba station started using the theme tune from the first Astro Boy TV anime, composed by Takai Tatsuo. Originally proposed by the aforementioned Takadanobaba West Shopping District Promotion Association, once JR were persuaded (they had been concerned it would not be helpful to blind people) they agreed to a two-month trial. Popular demand led to it being used… well… hopefully forever!

Baba has a great atmosphere, thanks in part to the many universities in and around the area – Waseda, Gakushuin and Tokyo Fuji Universities, as well as Gakushuin Women’s College and Toho Gakuen Film School. That partly explains the proliferation of B-gurume in its backstreets, which are a treasure trove of great bars and restaurants – a favourite area of the Maction Planet team, and indeed our guests.

Here’s to another great day in The World’s Greatest Metropolis, and beyond!

Maction Planet leads tours all over Tokyo, and beyond. We have recently seen a lot of interest in Baba, and have conducted several “Backstreets of Takadanobaba” tours over the last few weeks. We can head there as part of our fully-customised Iconic Tokyo Tours, Tokyo Food Tours and Tokyo Craft Beer Tours, as well as our Tokyo Otaku Tours. Join us! Email info@mactionplanet.com to arrange yours.