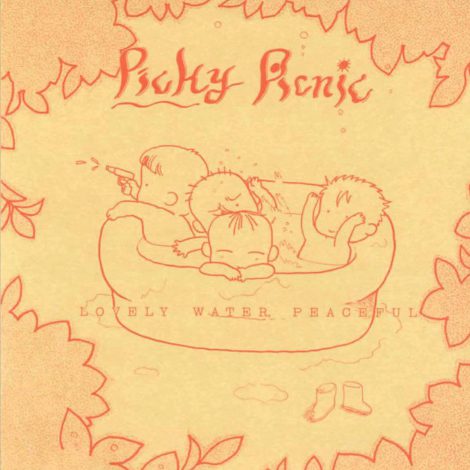 I came across this Japanese proverb recently which really resonated with me:

English: Home is where you live

The closest English proverb is “Home is where the heart is”, although the emphasis is slightly different.

都, みやこ (miyako) means ‘Capital city’, but here it is used to express ‘the best place to be’ which couldn’t tie in more nicely with Maction Planet’s Flagship Slogan “Tokyo, The World’s Greatest Metropolis”. We love it so much, we even put it on a T-shirt.

Miyako is also the word used to describe Tokyo (as the “Hana no Miyako” – Flower City) in the first verse of Tokyo Ondo, a traditional song about how great Tokyo is. It has been adopted as the Tokyo Yakult Swallows Baseball Team‘s home run celebration song.

Anyway, we digress. I decided to find out more about this phrase, which I’ve recently been trying to crowbar into conversation at every opportunity. And that was how I came across the genius of Picky Picnic -ピッキーピクニック.

Picky Picnic were an obscure avant-garde Japanese duo active during the 80s. Their members were Kaoru Todoroki and Yuji Asuka. They’re most known for predominantly using elements of children’s music in their work, interworking these through avant-pop, new-wave and experimental paradigms. They would often make their own quasi-children’s choirs – pitching up their own voices and overlaying multiple recordings to generate the ensemble-like resonance, then placing these over drum machine patterns. In spite of these churlish overtones, their tracks are haunting, melodic and incredible. They released three albums – “Picnic Land” (1982), “Ha! Ha! Tarachine” (1985) and “Kuru Kuru World” (1989).

So, how does this all connect with Sumeba Miyako? Well, Sume Ba Miyako (Happy Family) is track six on the Ha! Ha! Tarachine album. (The end of that sentence would normally warrant an exclamation mark, but the two already there in Ha! Ha! meant I thought we could do without it.)

I started to really get into Picky Picnic, and listened to, well, everything! Working my way through their catalogue, I finally reached Kuru Kuru World. This final album was released by a major label, CBS/Sony, their previous work finding a home on Panic Records. Kuru Kuru World is essentially their “Cynical Hysteria World” 2×7″, which was released in 1986, with six more tracks added at the start to give us 14 doses of Picky Picnic goodness.  You can definitely feel differences between the original 8 tracks from Cynical Hysteria World and the new 6 – I wonder if their signing to CBS/Sony forced them to moderate their sound a little.

Both Kuru Kuru World and Cynical Hysteria World featured the musical and artistic talents of animator/illustrator Kiriko Kubo. Kubo was born in Tokyo in 1959 and made her debut as a cartoonist in 1982. After the huge success of some of her early works, ‘Cynical Hysterie Hour’ and ‘Imadoki no kodomo’ (‘Children Nowadays’), she went on to direct animation, design CD and book covers (She is probably known best overseas for the album art for John Zorn’s Cobra – Zorn providing the music for the ‘Cynical Hysterie Hour’ animated shorts). She also writes essays and children’s books. Her Manga production continued with, ‘Buckets de Gohan’ (A TV anime in 1996), ‘Dobutsu Uranai’ (1999), two volumes of ‘Hime Mama’ (‘Princess mother-in-law’ – 2007/2008) and ‘Kuru Kuru Cynical’ (2007).

She was a perfect match for Picky Picnic. You can see from the titles of some of Kiriko’s works (e.g. Cynical Hysterie Hour, Kuru Kuru Cynical) that the influence on and of Picky Picnic went both ways. She tempers the duo somewhat (in a good way I think), but the insanity remains.

Kuru Kuru World starts with the catchy “Someday-いつか-” and continues with “ドレミの歌” – the ‘Do Re Mi song’ which quickly descends into anarchy.  The insanity continues with “どんぐり行進曲”（Donguri On The Head), the first of the Cynical Hysteria World tracks. The 51 minute journey through the Japanese underground ends with “(仮）放課後” – After School – fading out to an electro-cut of the chimes of Big Ben.

Sadly Picky Picnic came to an end at the end of the 80s, disbanding for reasons unknown. Kiriko Kubo has been living in London for the last 18 years – she is now Mrs. Nick Midgely!

So, there you have it. A resonant proverb, and an insane avant-electropop underground duo from the 80s. Another lesson to expect the unexpected in the never-ending mystery of the The World’s Greatest Metropolis.

Expect some Picky Picnic to be played on Maction Planet Radio soon!

Maction Planet runs Tokyo Music Tours, which we brand “Maction Planet Radio Tours”, introducing people to the varied and diverse range of music in The World’s Greatest Metropolis. Contact us at info@mactionplanet.com to arrange yours!