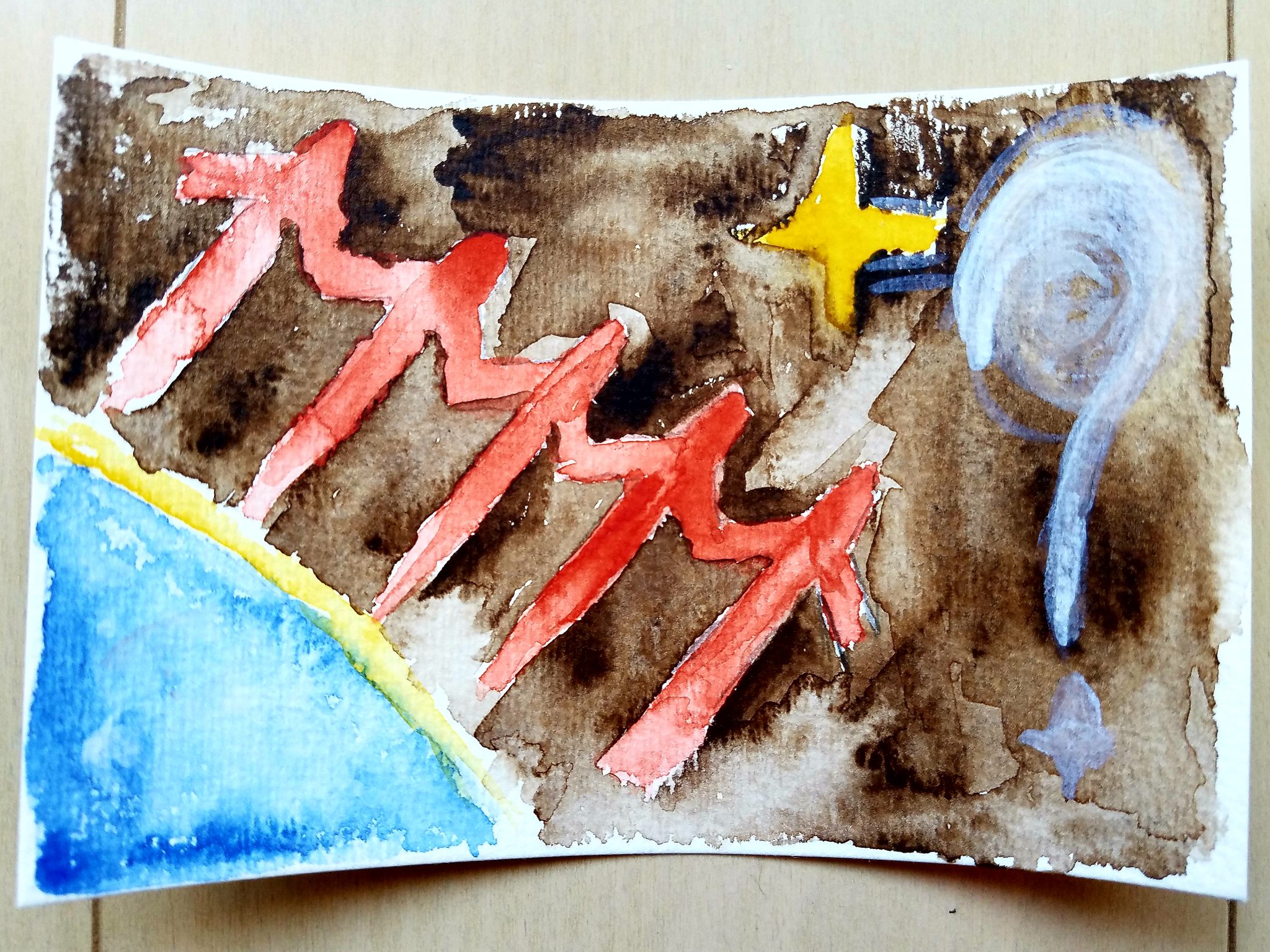 What the Tokyo Locals Do: Space Art Workshop with Ayako Ono

Our founder Mac leads our Artokyo tours and writes about the art scene in Tokyo here on our blog and for Tokyo Art Beat. But how good is he at making it? Find out as he describes an evening of Space Art at ISU Space Cafe Tokyo!

On 13th December ISU SpaceCafe held a special event in collaboration with SEDS UTokyo. SEDS UTokyo stands for ‘Students for the Exploration and Development of Space’ at the University of Tokyo, and its president is Danielle DeLatte, founder of ISU Space Cafe Tokyo.

The University of Tokyo (Todai or UTokyo) was the first national university in Japan and is celebrating its 140th anniversary this year. We met at the Akamon Gate of Todai’s Hongo Campus and headed to the classroom where the event was taking place. On the way, we passed one of UTokyo’s most iconic modern buildings, the Fukutake Hall, opened in 2008. 100m long but just 15m wide, the building was designed by Tadao Ando, one of Japan’s most revered architects. A wonderful coincidence as I had just come from leading an afternoon art tour which included a viewing of the Tadao Ando: Endeavours exhibition at the National Art Centre in Nogizaka! 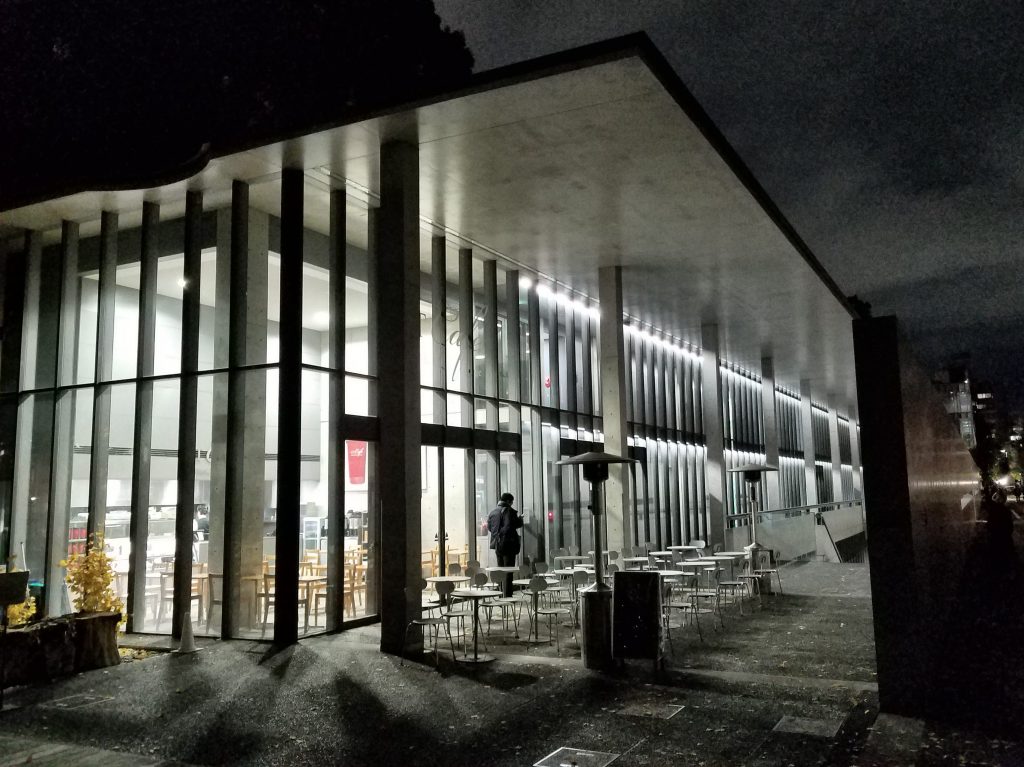 Our instructor for the night was Ayako Ono, who has to be one of the most accomplished people I have ever met. A distinguished artist who has received government scholarships, Ayako also has a PhD in Behavioural Science. She has lectured about space tourism and space art study at Wakayama University. She was the first artist in residence at the European Space Agency. Oh, and she’s an amazing singer too – we were lucky enough to hear one of her original compositions, ‘Let’s go to the moon’, during the evening!

We began with an introduction to Space Art – a new genre of contemporary art which relates in some way to space activities. Roger F. Malina, the distinguished astronomer and publisher, defined seven types of space art including fine art, applied arts, space photography and conceptual art using new ideas generated through space exploration.

Space Art using weightlessness and Music is another art form that Ayako has been involved in creating. In a project supported by JAXA, Ayako and So Negishi developed two musical instruments, the Fractal Bell and Ellipsoid Bell, which were tested onboard the International Space Station by one of the commanders. Playing instruments in space comes with its own challenges due to the zero gravity environment. For example, one of the instruments did not make any sound during circular motions due to centrifugal force, but the astronaut discovered a method of using the instrument which did work. In fact, Ayako asked for two minutes of the astronaut’s precious time, but the spaceman was having such a good time that, during technical communications interruptions, he continued playing and Ayako’s team could see his skill improving over their jamming sessions. These new instruments, part of a future space leisure environment, could also be developed into communication tools. Music could become a very important part of stress management during spaceflight: even a ten minute session slotted into a busy schedule can work wonders, while watching a movie takes a less feasible two hours.

Interior design is also an important element in maximising psychological well-being in space. The ISS currently uses direct fluorescent lights, but Ayako has worked in design teams which recommend indirect light be used in habitats, along with mirrors to make the cabin space feel larger.

Ayako shared her belief that nature, even artificial nature, will have its place in space, using Olafur Eriksson’s Round Rainbow as an example of such a piece of art. Another could be the creation of Zen Gardens on the moon or on Mars. 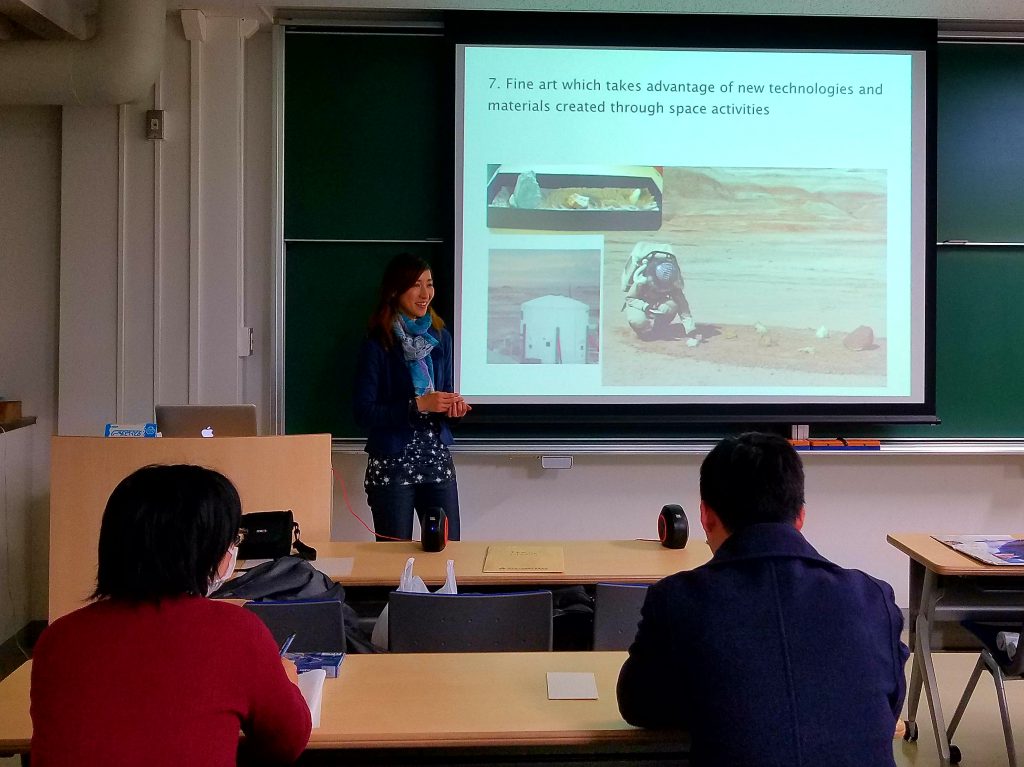 I enjoyed the anecdotes which Ayako provided: The noise on the Japanese ISS modules is quieter than the other modules, unsurprising for those of us who have lived both in Tokyo and elsewhere! She likened the experience of parabolic flight to being in the womb.

And when making velcro sculptures, green and blue are good colours to use – red or yellow are not great in space due to their associations with danger!

Inspired by Ayako’s words, it was time to create! Some participants used chalk, and others watercolour, using a brush with a built-in water supply which can be used in microgravity environments!

Elizabeth Tasker, author of the exoplanets bible ‘The Planet Factory’ has already tweeted out an almost completed version of my ‘masterpiece’ (note the inverted commas). The finished product is the featured image of this post. Titled ‘Together’, it shows humanity linked together (red as the blood that courses through our veins binds us together, even as people look for difference through skin colour and nationality) and leaving earth for the stars. Or at least I thought it did until Elizabeth suggested my people look like nuclear warheads! This inspired me to add a galaxy in the shape of a question mark. Will humanity’s progress into the universe be peaceful, or will we always harbour some darkness to inflict on anything which is ‘different’? Time will tell…

Thanks to Ayako, Danielle, ISU Space Cafe Tokyo, SEDS UTokyo and all the participants for a great night.

Dr. Elizabeth Tasker’s book ‘The Planet Factory’ is available here. An active science communicator, you can follow her on Twitter here.

Further details of ISU Space Cafe Tokyo, including upcoming events, can be found on their website and Facebook and Meetup pages.

Maction Planet runs Tokyo Private Tours. Whatever your interests, drop us a line at info@mactionplanet.com and join us for a truly unique time in The World’s Greatest Metropolis.