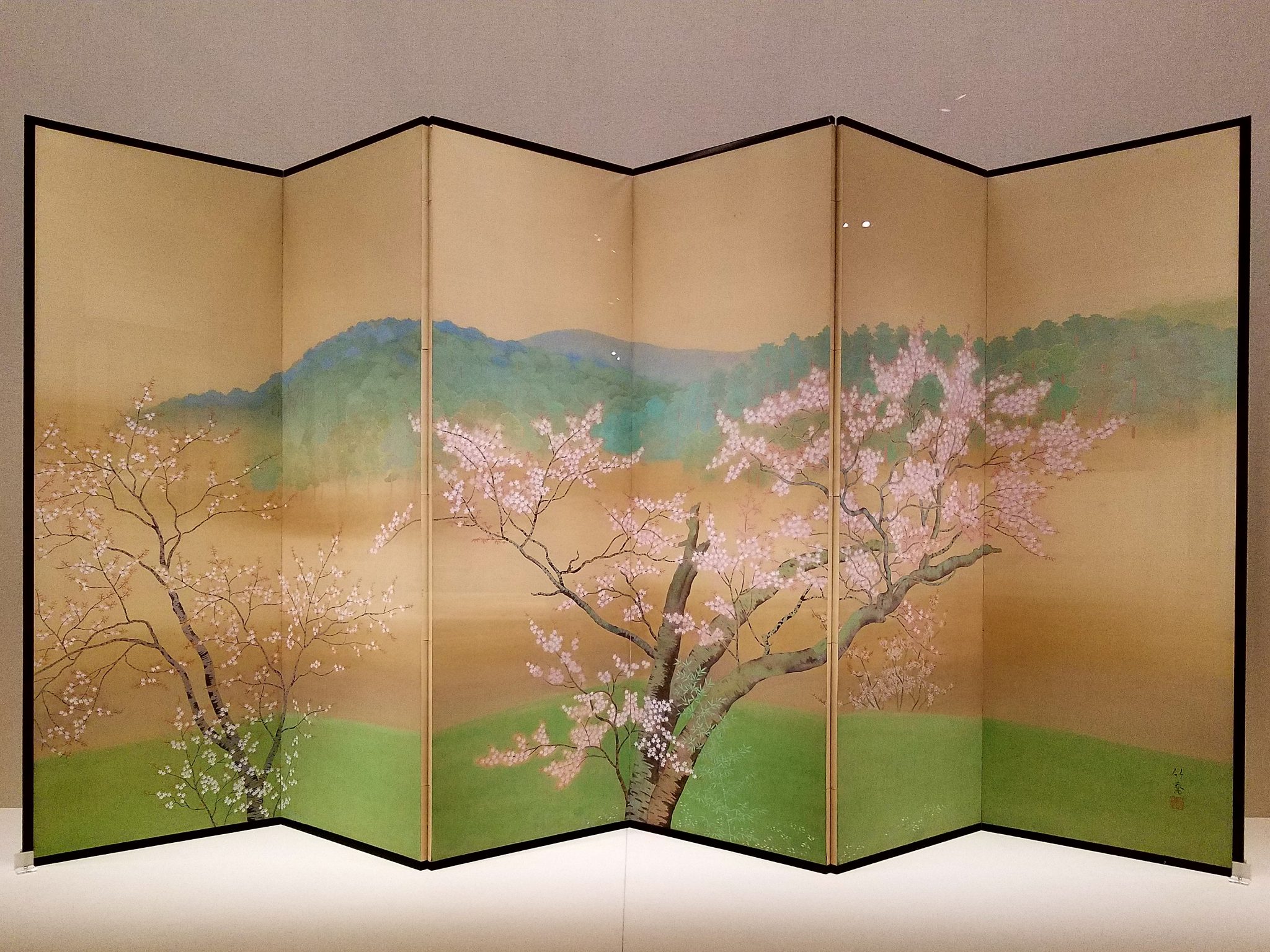 For the first time in six years the Yamatane Museum of Art is holding a special thematic exhibition showcasing many of their most famous Cherry Blossom-related works titled “Sakura, Sakura, Sakura 2018 – Flower Viewing at the Museum!”. Mac, Founder of Maction Planet, was at the Press Day for the show and guides us through this indoor hanami.

To Japanese artists seeking subject matter, sakura (cherry blossoms) have always been there to provide inspiration. This exhibition covers the symbolic role of the cherry blossom and its importance throughout centuries of Japanese history. Around 60 artworks from the museum’s collection (and one from a private collection) are on display.

The Yamatane Museum is one of my favourite museums in Tokyo. Opened in 1966, it moved to its current location in 2009. Their collection comprises of some 1,800 works of nihonga. Nihonga developed as an art form in the early Meiji period. The term refers to post-Edo era paintings which have been created in accordance with traditional Japanese techniques and materials. These works were distinguished from yoga, western-style paintings which were produced by Japanese artists using European techniques.

The museum has no permanent exhibition as nihonga is very fragile and can only be exhibited for roughly 2 months a year at a time under strictly controlled conditions. As a result, the museum holds 5-6 temporary exhibitions a year. This year kicked off with the incredible Yokoyama Taikan – The Elite of the Tokyo Art World, celebrating 150 years of the Nihonga pioneer’s birth, which I wrote about for Tokyo Art Beat, one of Tokyo’s largest art websites.

‘Sakura, Sakura, Sakura 2018 – Flower Viewing at the Museum!’ takes you on a tour through Japan’s notable cherry blossom locations in Tokyo, Kyoto, Nara, Wakayama and Tohoku amongst others, expressed by different artists. The scenes are varied, depicting single trees, famous groves or just the blossoms themselves. Each painting reflects the artists’ feelings about the subject matter. One of the many reasons that the blossoms are so popular is their changing appearance throughout the day – the subtle pink reflecting the morning sun, a bright white glow in the afternoon and the subdued calm during the evening. There are works capturing all these hues and more.

Here are my three favourite works in the exhibition:

This is my absolute favourite of all the magnificent pieces on display, and the story behind it is fascinating. The eastern passageway leading to the Imperial Palace’s seiden (state hall) has cedar sliding doors with two works called Sakura and Kaede (Maples). Hashimoto Meiji was the painter of Sakura which he based on his sketches of Miharu Takizakura, the thousand year old weeping blossom in Tamura, Fukushima. The painting on show was commissioned by the Yamatane Museum’s founder Yamazaki Taneji and is similar in concept to that in the Imperial Palace. The differing dimensions and materials of the works have led to different emphasis. In the palace piece, which measures 2.74 x 2.5 metres, a more decorative approach was taken as the doors would be viewed across a courtyard. In the Yamatane piece, the trunk and branches are highlighted. 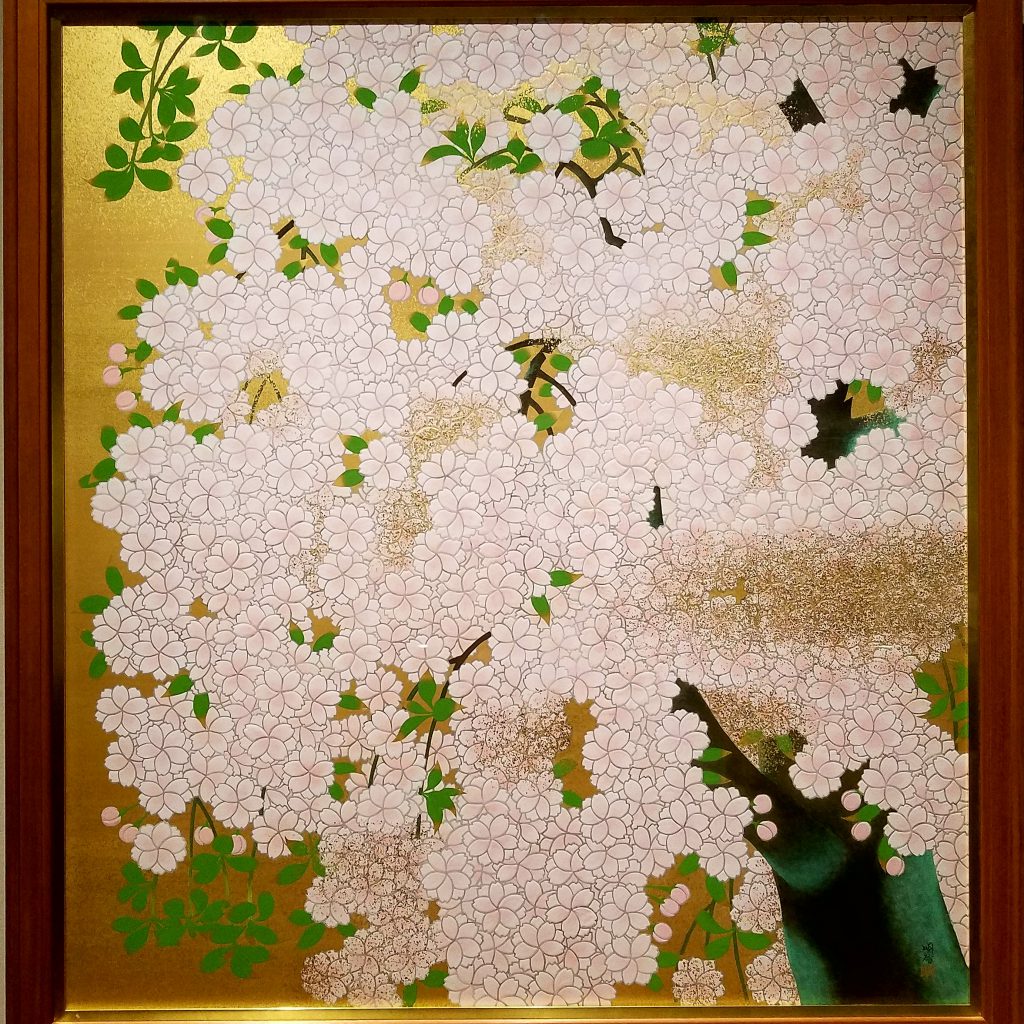 In the spring of 1598, Toyotomi Hideyoshi had 700 trees of cherry blossoms planted at Daigo-ji in Kyoto and held, what was by all accounts, an epic hanami with 1300 people. The artist, Togyu, visited Daigo-ji on the sixth anniversary of the death of his sensei Kobayashi Kokei. He painted this weeping cherry tree by applying layer after layer of watered down paint to evoke the density of blossoms. Togyu was awarded the Order of Culture in 1962. The fact that this work was created when Togyu was 83 years old adds to its elegance. 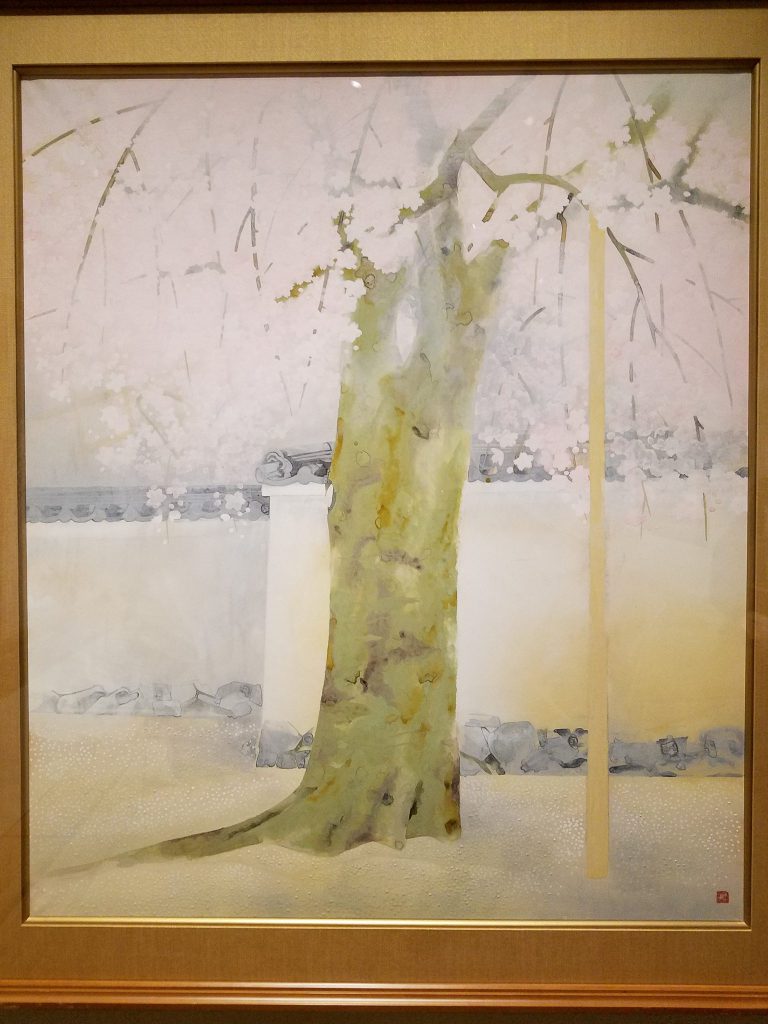 Omoda Seiju painted this incredible scene during an experimental phase which began in 1917. In 1914 he formed the Sekiyokai group with Imamura Shiko and others, and created nanga-style paintings during that period. Nanga was a style of painting which flourished during the later part of the Edo era amongst literati artists who shared an admiration for traditional Chinese culture. After Shiko’s death three years later the group disbanded and Seiju began working on more decorative compositions. 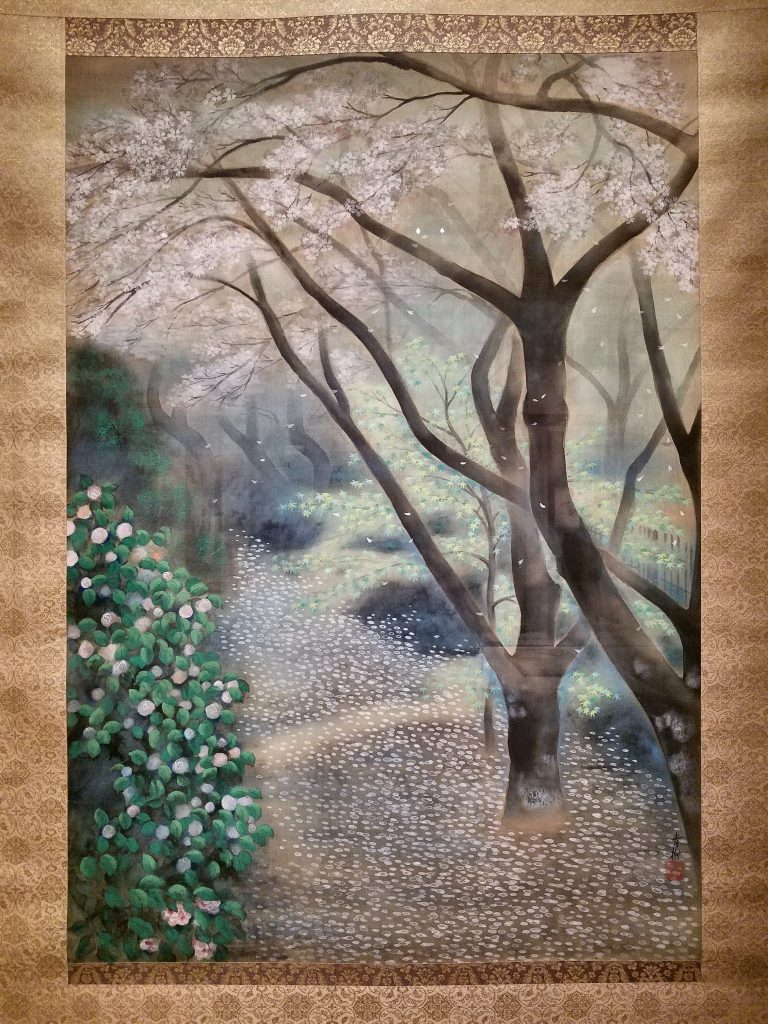 The experience is not over once you have finished viewing the artwork. The Yamatane Museum Shop has a delightful range of limited edition Cherry Blossom merchandise based on the art on view. 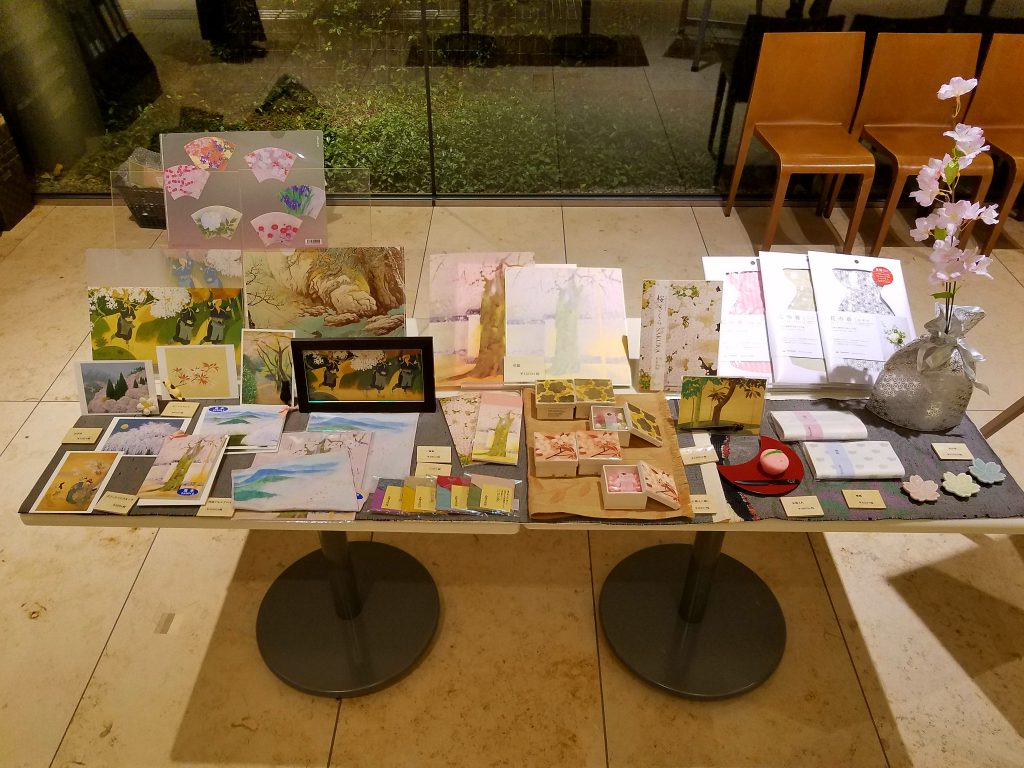 After that, head to Cafe Tsubaki on the first floor and enjoy some wagashi traditional Japanese sweets inspired by some of the artworks from the exhibition. Made by the Kikuya confectionary in Aoyama which dates back to 1935, this is a unique way to ‘experience’ the art, indulging in the full sensory experience of Japanese culture. 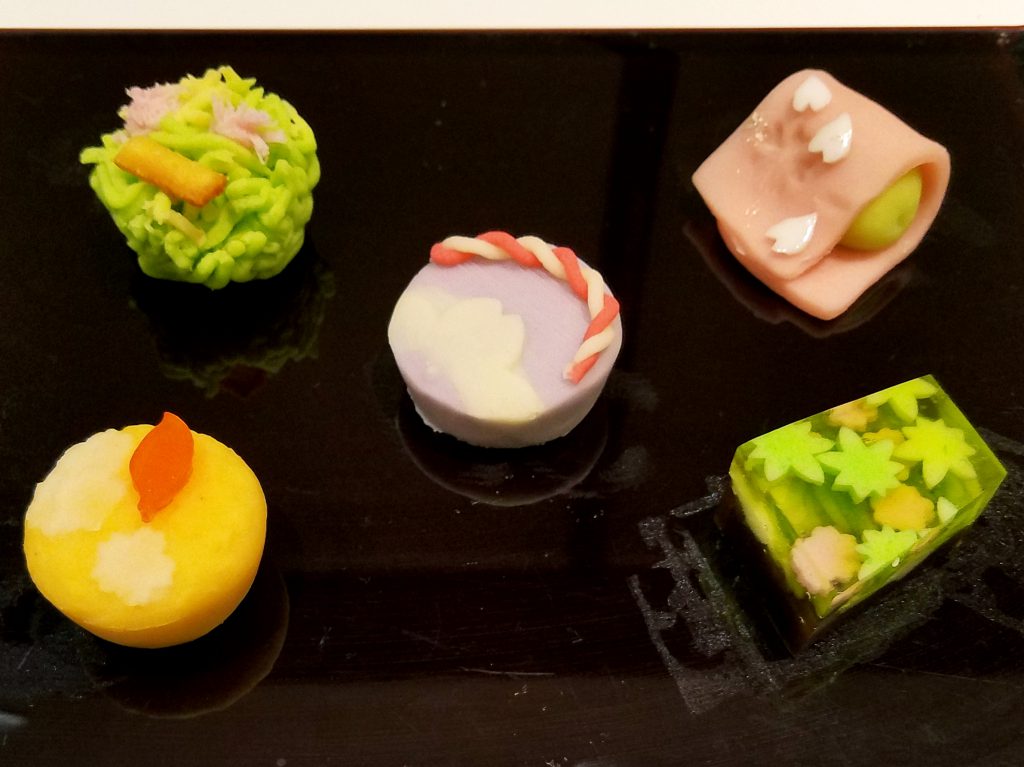 The exhibition ends on 6 May, well after the famous Somei Yoshino blossoms have finished blooming in Tokyo, allowing those who miss outdoor hanami to conduct their own indoor flower viewing, across time and geography. Highly recommended.

If reading this has got you in the mood for some hanami, you have until 09:00 JST on 26 March to get your tickets for the Maction Planet x Shochu.Pro Hanami 2018. Draft craft beer from Baird Beer, unlimited all-you-can drink shochu poured by world-renowned expert Chris Pellegrini. Watch the video of last year’s sell-out event here to get yourself in the mood, then purchase your tickets here!