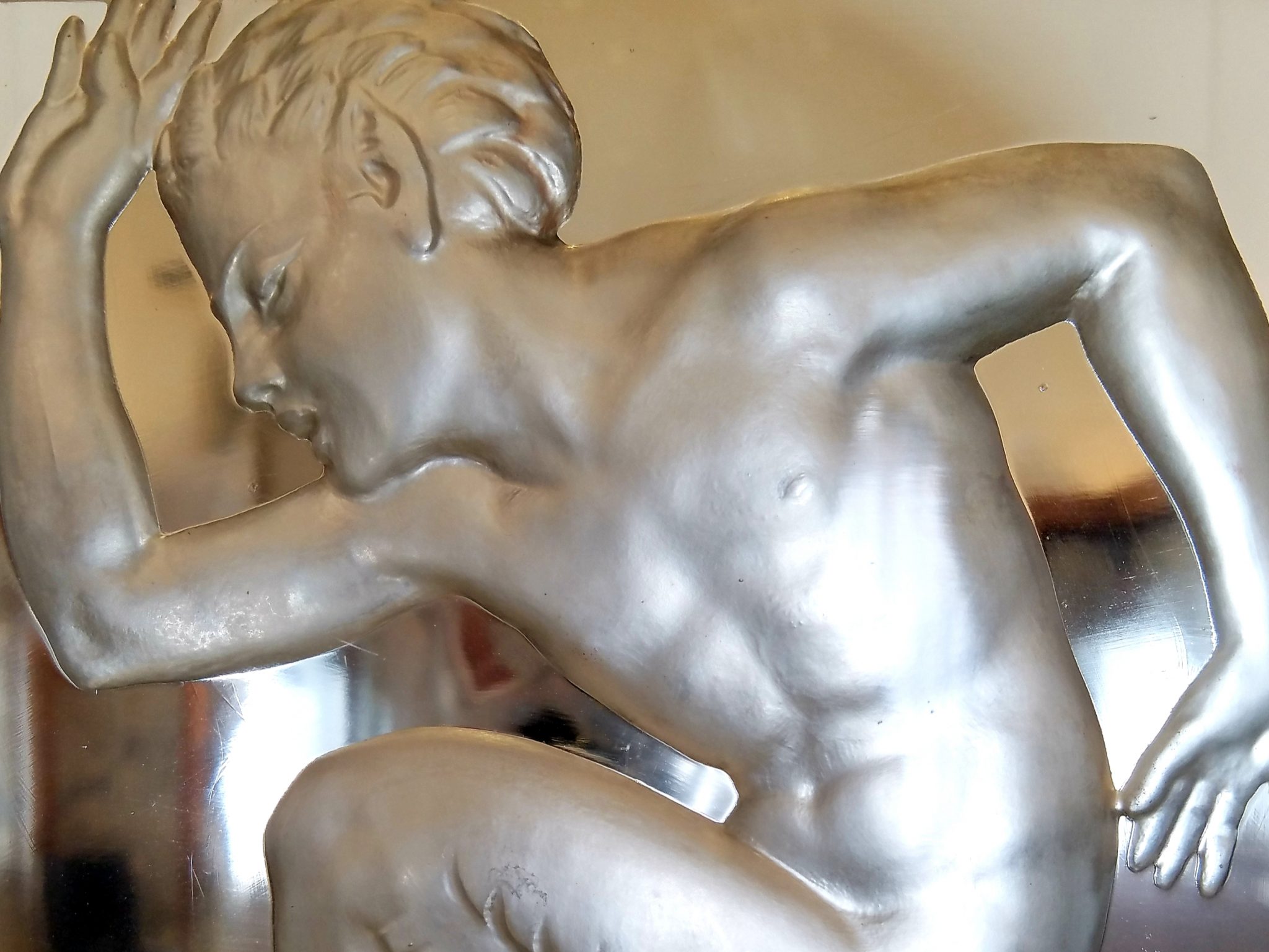 Some of the best Art Deco glassware in the world can currently be enjoyed in Tokyo at an exhibition of the works of Rene Lalique (1860-1945), on display at the city’s most elegant art gallery, the Tokyo Metropolitan Teien Art Museum in Meguro.

The exhibition, titled ‘René Lalique – Modernity and Elegance’, showcases two hundred and twenty carefully selected examples of the master’s work from the Kitazawa Museum of Art’s Lalique collection. The museum in the city of Suwa, Nagano Prefecture, is famous for its glass collection: a thousand works, ranging from Art Nouveau glass by Emile Galle and the Daum Frères to Art Deco works created in the early twentieth century.

A more fitting venue to host Lalique’s masterpieces could not be imagined. Once the residence of a Japanese Imperial prince, the Teien is ideal housing for the exhibition of the famed glass designer’s work, as the building features a striking glass door and chandeliers designed by Lalique himself.

Some of the pieces now on display at the Teien have to be seen to be believed. His opalescent vase ‘Bacchantes’ (1927), which changes colour with backlight, and his sumptuous table centrepiece ‘Three Peacocks’ (1920), in moulded clear glass and satine with an illuminated bronze base, are two such examples. 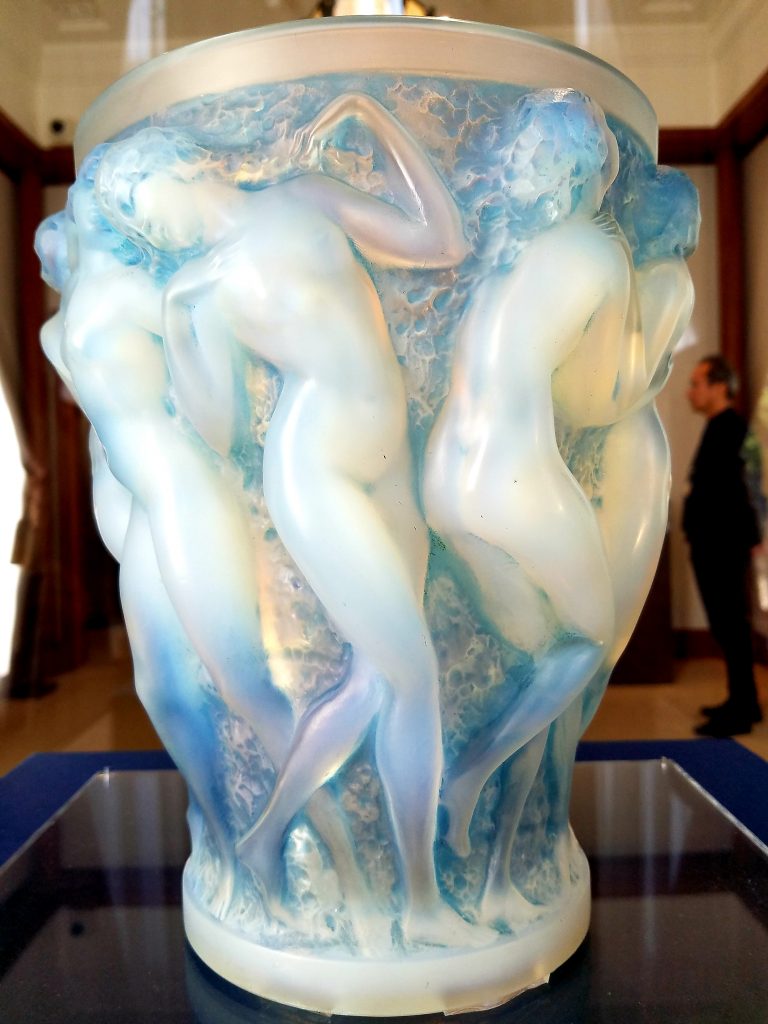 Born in the Champagne region of northeastern France, Lalique became a master jeweller in Paris, attaining mastery of a variety of materials, including but not limited to gold, gems, enamel, pearls, horn and, of course, glass. He was famous for his ability to use ‘cheap’ materials such as glass and incorporate them into jewellery to breathtaking effect. He helped to spearhead the Art Nouveau movement at the dawn of the twentieth century and was awarded the Grand Prix at the 1900 Exposition Universelle in Paris, earning worldwide renown for the avant-garde nature of his work.

When looking at Lalique’s work, there are three overlapping periods into which one can divide the art stylistically. Namely, his early Art Nouveau pieces; his middle period spearheading the coming Art Deco movement with his work in both jewellery and glass; and his later life, in which he focused largely on large-scale production of glass.

During the Art Nouveau period, Lalique innovated the use of glass in lieu of expensive gemstones. This was partially due to the ubiquity of glass which resulted from the improving technologies of late-nineteenth-century manufacturing. Lalique had been using glass as a primary medium well before his claim-to-fame with the Exposition Universelle, having recognized the potential of the medium much earlier on and mastering a wide variety of glass-making methods. However, glass was still too time-consuming and expensive to result in a stable business.

Enter François Coty, a perfumer who placed a large order with Lalique for the design and manufacture of glass bottles, intending the result to visually communicate the elegance and class of the otherwise invisible scent of the perfume. Pioneering the use of special techniques he formerly used in the processing of metals and making of moulds, Lalique managed to deliver poetry-in-glass to the perfumer and this pushed him past his initial production barriers.

With the widespread use of electric lighting at the turn of the twentieth century, the demand for glass was never higher. Lalique built a factory on the outskirts of Paris in 1909, organizing a mechanical method for high-volume production and beginning his phase as an industrial glass artist.

While the Art Nouveau movement in which Lalique found his start favoured coloured, often opaque glass, Lalique worked mainly in transparent or translucent glass, pioneering the Art Deco movement using techniques that resulted in striking visuals. In addition to the standard repertoire of casting and press-formed techniques, he also developed proprietary methods for moulding glass. His works were characterized by sharp designs and a surprising sense of mass, given the translucence of the glass. The results were elegantly aesthetic and highly practical. The relatively affordable medium of glass allows light to shine through with a brilliance on a par with precious metals, bringing to Lalique’s work the art de vivre, or ‘art of living’ characteristic of French decorative art. 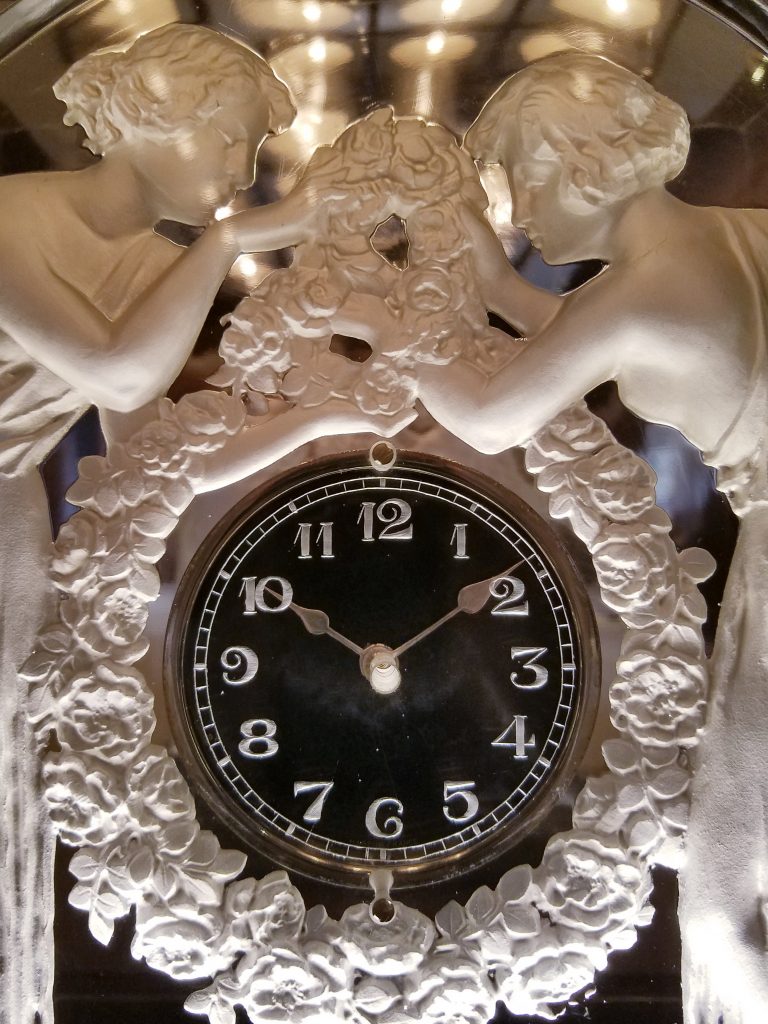 From small perfume bottles to richly coloured vases, from enthralling figurines to huge outdoor fountains, electrified ornamental works, automobile hood ornaments… Lalique made important advances in glasswork as an art form.  His accolades include panels for the famed Orient Express, as well as windows, panels, and chandeliers for buildings and even a cruise liner. At the ‘Exposition des Arts Decoratifs’ in Paris in 1925 Lalique revealed a 13.7 metre-tall glass fountain that incorporated electric lighting (brand-new technology at the time) with decorative architectural glass. This cemented his position as France’s leading glassmaker, as well as making his name forever synonymous with the Art Deco movement. In his some thirty-five-year glass career, Lalique produced 4,300 unique designs.

In addition to his well-known work, the exhibition at the Teien also features a special showing of works from the Asaka family collection as well as vases from Paris, brought back by the Showa Emperor as mementoes from his time in France before his ascension to the throne. Lalique showed an intense interest in Japan, due to his work on Prince Asaka’s residence, which is now the main building of the Teien Museum. Although he did not visit Japan during his lifetime, his works were well-known in the country before his death. During the Taisho and early Showa periods, at the height of the Art Deco movement, France was an exotic, almost dreamlike land to the Japanese people. Despite the barrier of space, much of Lalique’s work found its way to Japan and is treasured by the nation’s art lovers. 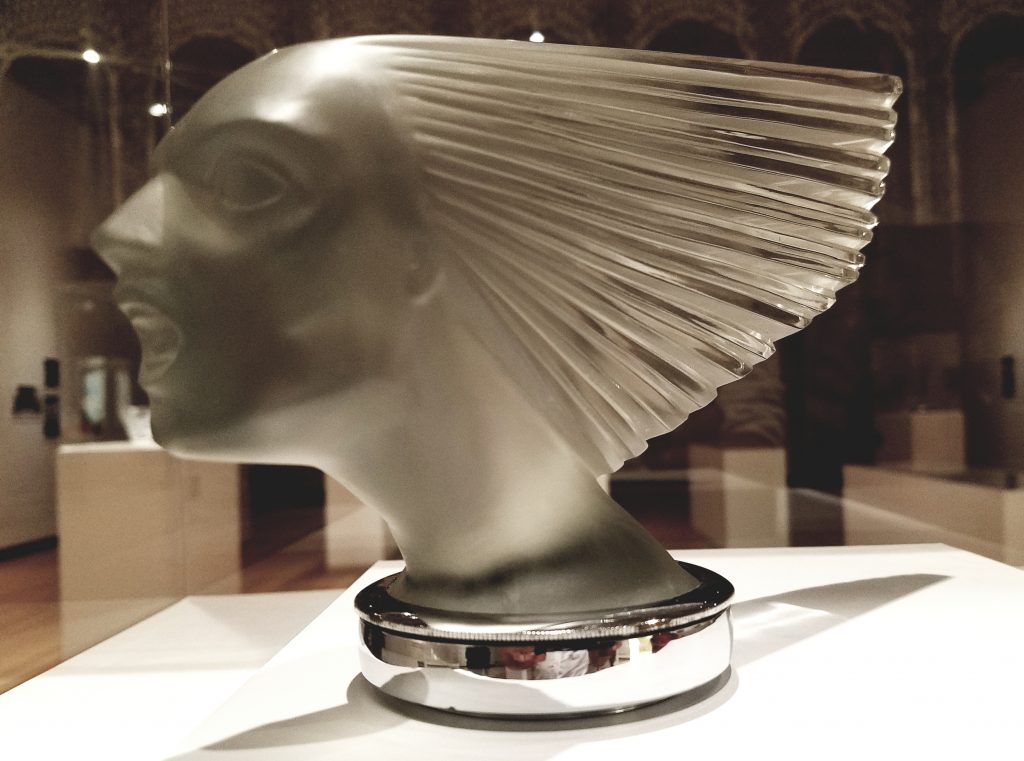 The Tokyo Metropolitan Teien Art Museum is a rare example of the Art Deco art style visible in Japanese architecture. Completed in 1933, it was built as the residence of Prince Yasuhiko and Princess Nobuko of the Asaka branch of the imperial family. The prince and princess, who were then staying in Paris, visited the ‘Exposition des Arts Decoratifs.’ There they were exposed to the work of Lalique, as well as contemporaries such as Henri Sauvage, Albert Laprade, and Henri Rapin (1873-1939). The couple commissioned Rapin to design the interiors of the principal rooms, while Lalique created the glass-relief doors for the residence’s Main Entrance Hall as well as the chandeliers for its Great Hall and Dining Room. The doors displayed images of goddesses welcoming guest.

A preliminary drawing from the early discussions with Lalique’s Japanese clients, originally sent to his studio, is preserved at the Kitazawa Museum of Art. On the drawing, written in Lalique’s hand, is a note saying “Tokio – This is the model Tokyo chose, a human figure clad in sheer cloth.” A request was made to avoid having nude female figures at the entrance to the residence. The ‘Tokio’ drawing is extremely valuable as historical source material, giving insight into Lalique’s handling of the Tokyo deal.

Lalique has an important place in art history for his technical developments in the field of glass: enamelling, moulding, opalescence. However, it is his artistic sense for which he will be remembered. He brought a fresh perspective to standard symbols of beauty and elegance such as women, flowers, and birds. This in itself may explain his unrivalled popularity with the art community of Japan. However, he also managed to pull artistry from less likely sources — lizards, beetles, frogs, bats, and even flies were occasional features in his work. Such stylization of nature is now seen as characteristic of Art Deco, but few attempted using this iconography before Lalique. Later in life, Lalique lent himself more and more towards increasingly abstract geometric designs suited to mass production. They lack the charm of his earlier work, yet still make up a powerful and vibrant body of work on their own. However, in the dim halls of the Teien, light catching the glass and sparkling like stars, there is a single, inarguable fact visible in all of Lalique’s displayed works: they are truly magnificent.

Maction Planet runs bespoke Private Tours and Experiences in Tokyo and beyond, including Tokyo Art Tours. To book yours, contact us at info@mactionplanet.com