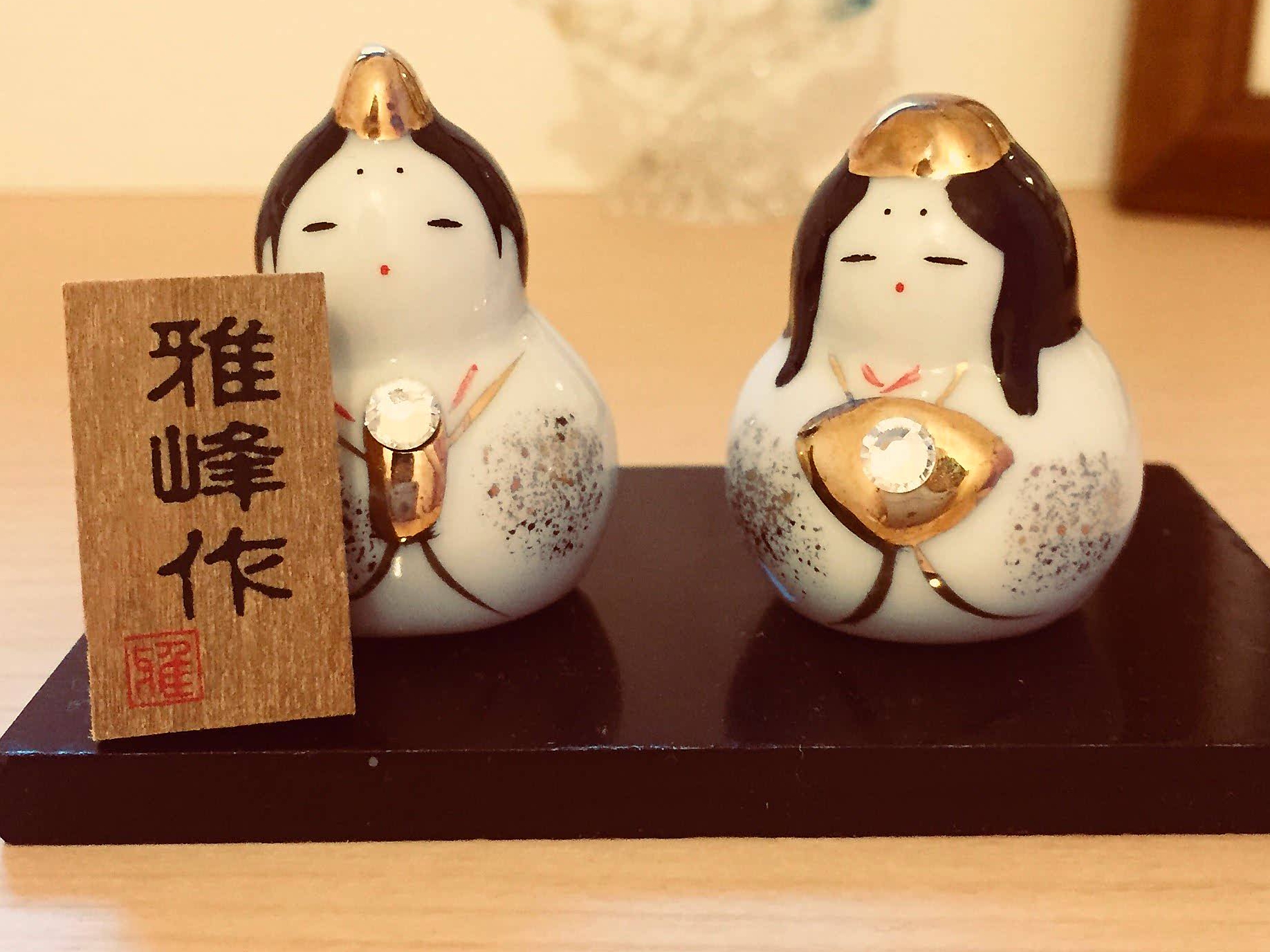 An Ode to Hinamatsuri

Hinamatsuri (雛祭り), literally the Doll Festival but commonly known as Girl’s Day, is held on March 3rd every year. It’s the day when families pray for and celebrate the happiness and prosperity of their girls. We take a look at the history, customs and foods surrounding this colourful day.

The History of the Hinamatsuri

Like many festivals around the world, the modern day Hinamatsuri has its origins in the fusion of a number of ritual festivals, and like many cultural events in Japan it was heavily influenced by Chinese philosophy and tradition.

Its origins began 3000 years ago in China. Under the Chinese calendar some days are considered auspicious, and some inauspicious. According to Yin-Yang philosophy the first day of mi (serpent) in March was an inauspicious day. On this day, people washed their hands and feet in the local lakes, seas or rivers as a way of escaping misfortune that might befall them on this day.

Concurrent with this, another traditional practice during this period was that people protected themselves by making human images out of paper or grass and transferring their impurities to these katashiro (paper images) or hitogata (shape of man). As this custom came to Japan, people would stroke their bodies with these images, shifting their impurities to them, and then setting them adrift at sea (a practice still seen in some parts of Japan such as at the Awashima Shrine in Wakayama).

Over time, the March sekku took on aspects of this broader tradition and these two rituals combined to form an annual event called Mi-no-hi-no-harae (purification on the day of the serpent).

The shift from first serpent day in March to 3rd March is because it became fused with another Chinese idea – that the first day of the first month, the third day of the third month and so on are lucky days –  the double odd numbers making the dates highly auspicious.

March 3 is also referred to as momo no sekku, or the peach festival. The blossoms of the peach tree, the third of the three great blossoms, after cherry and plum, bloom around the beginning of the third month according to the lunar calendar. As well as welcoming in spring, the blossoms are traditionally thought to ward off malevolent spirits, much like the hitogata practice described above.

So where do the hina dolls come in? Let’s fast forward to the Heian period (794–1185). Kyoto (Heiankyo back then) was the capital and the aristocracy was enamoured with Chinese culture. It appears that another popular custom was playing with dolls, hiina-asobi, not only among young girls but also adult women of the nobility.

Mention of hiina and hiina-asobi often appears in literature from the Heian period, for example, in the Tale of Genji (widely considered the world’s first novel), The Pillow Book by Sei Shonagon and the Gossamer Years by Michitsuna no Haha.

Somewhere along the way this association of girls playing with these dolls became connected with the practice of hitogata described previously and by the middle of Edo Period (1603-1867) the Hina Matsuri took root as an event to celebrate a girl’s birth on the third of March of her first year and soon after became an established regular annual event. This was also when hiina lost of one of the i’s to become hina.

There were further evolutions. The custom of including a set of hina dolls in a bride’s dowry, and holding a Hina Matsuri on the first third of March of her marriage at the home of the family into which she had married, began to be practiced. Some might say that the day is now a celebration of all womanhood regardless of age.

Customs and practices – those dolls… 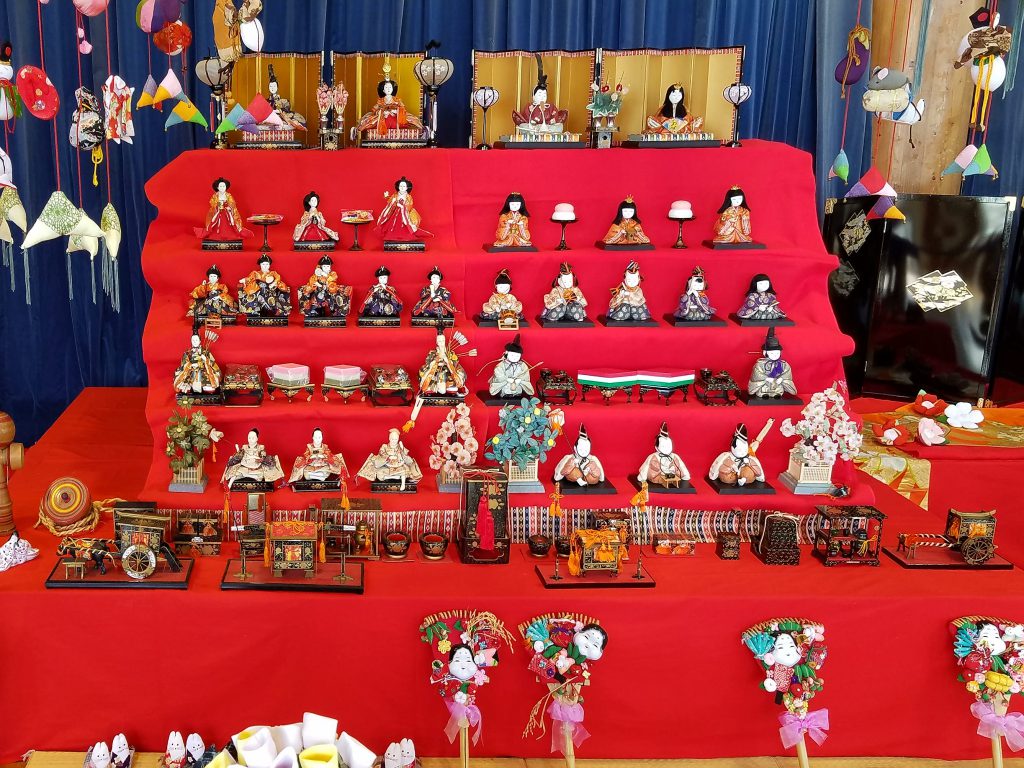 Families with girls set up a special step-altar called a hinadan (雛壇), a five to seven-tiered stand or platform covered with a red carpet with rainbow stripes at the bottom called dankake (段掛) or himosen (緋毛氈).

On it are placed hina ningyo (雛人形), a set of ornamental dolls representing the Emperor, Empress, attendants, court officials and musicians in traditional court dress of the Heian period. Each doll has a designated role and specific accoutrements (e.g. fan for the Empress, sword for the Emperor, sake box, ladle, musical instruments), and their placement is also predetermined.

The altar may also be decorated with boughs of peach blossoms. You may also see an offering of hishimochi, a special sweet associated with the hinamatsuri. Made of mochi, it is diamond shaped and typically has three layers – pink at the top, white in the middle and green at bottom. Pink represents plum blossoms, white represents the snow of the waning winter, while green represents the fresh growth of early spring. In some parts of Japan hishimochi have 5 or 7 layers and may contain yellow.

Traditionally there were big regional differences in these altars. The Kyoto-made altars have miniature kitchens and hearths for cooking. Doll sets from Tokyo are tall with many steps. They also have chests, shelves and other furnishings to display with the dolls. Today, however, these differences have almost disappeared. A lack of space in modern homes and apartments has led to downsizing of the altars, and it is sometimes more practical to have a three-tiered altar, or only the Emperor and Empress on a platform.

Families generally start to display the dolls in February on an auspicious day and take them down immediately after the festival. It is believed that leaving the dolls on display past March 4 will delay the girls’ marriage. 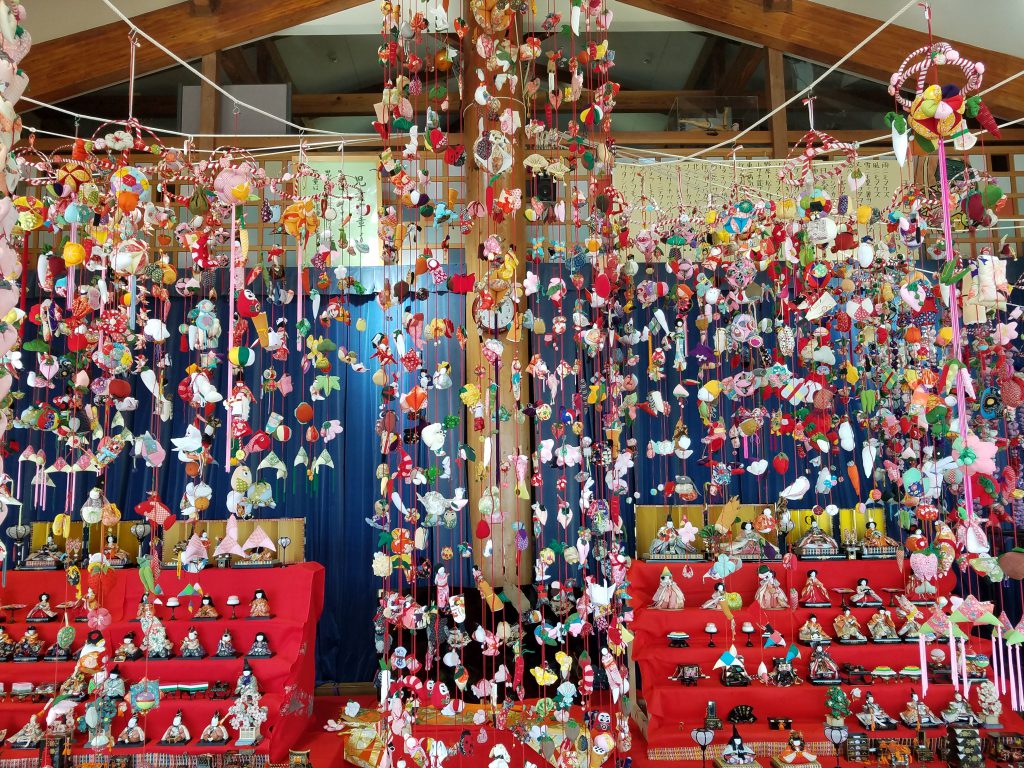 Increasingly common around Japan are tsurushi bina, decorations on a string that are hung from a stand for Hina Matsuri. This tradition began in Shizuoka Prefecture but has spread throughout the country as they take up less space than traditional altars and are much easier to pack away. The decorations include dolls, stylised cute animals and other symbols of Hina Matsuri, often made of thick Japanese silk – the kind used in kimono fabric. 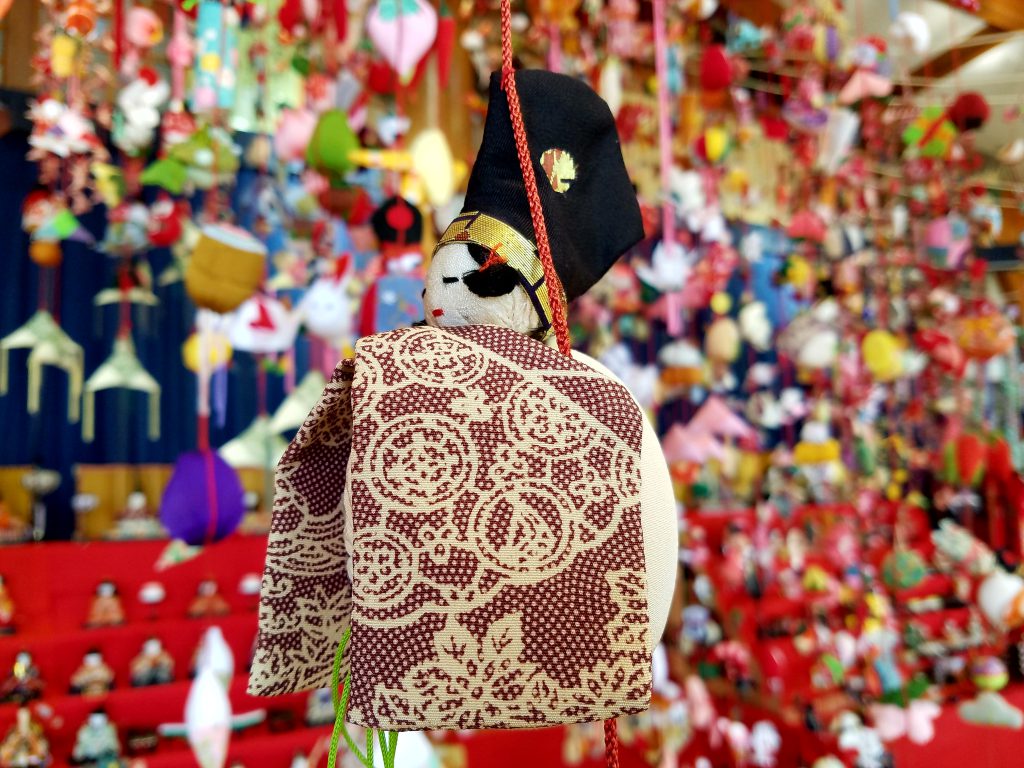 No festival in Japan is complete without the special, seasonal foods eaten at that time. On the day of hinamatsuri, families enjoy traditional dishes such as chirashi-zushi, a bowl of sushi rice topped with fish and other ingredients; hina-arare, bite-sized crackers flavored with sugar or soy sauce depending on the region and ushiojiru, a salt-based clear-broth soup containing clams. Clam shells in food are the symbol of a united and peaceful couple, because a pair of clamshells fits perfectly but no pair but the original pair can do so. The previously mentioned hishimochi is also eaten.

The customary drink for the festival is shirozake (usually known as amazake), a white, unfiltered and sweet sake with less than 1% alcohol.

All of us at Maction Planet wish everyone celebrating hinamatsuri a wonderful day and prosperous future.