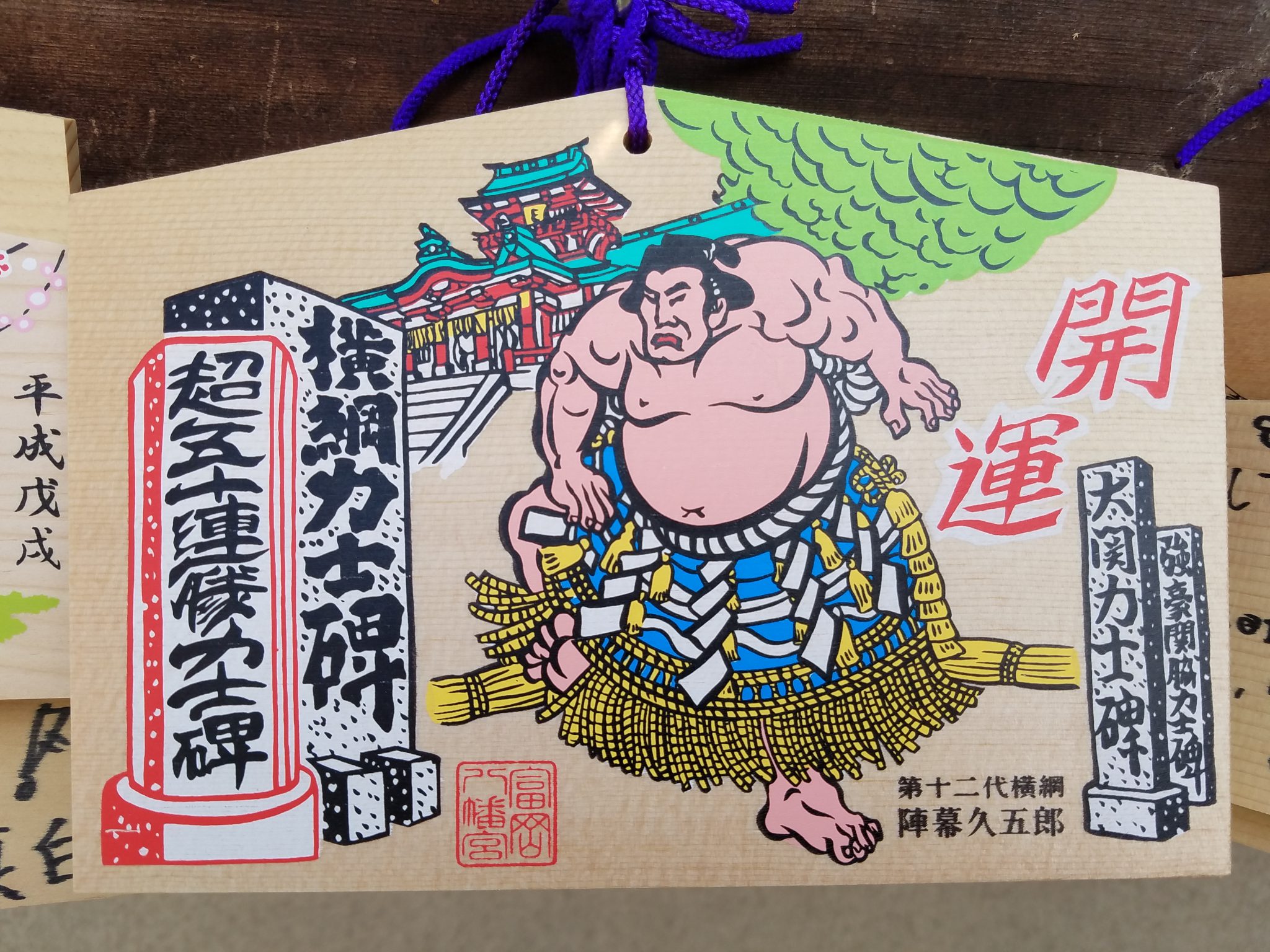 An Ode to Ema: The History of Japan’s Votive Tablets

Ema are small wooden votive tablets used by worshippers to write down their prayers, requests or gratitude and offer them up to the deities enshrined in the religious site. Ema provide a medium through which people can externalize and express their innermost fears and worries, and seek solace and support, ‘turning to the gods in times of trouble’ (kurushii toki no kamidanomi). We take a look at the fascinating history behind these ubiquitous objects.

Ema are perhaps the most conspicuous of all the objects seen at a shrine. Their use is widespread, and represents a continued belief that spiritual entities have a part to play in everyday life and destiny. Originating from Shinto traditions, they are still commonly found at both Shinto shrines and Buddhist temples in Japan.

The word ema (絵馬) means “picture of a horse”. This unusual name is a result of the origins of the practise. In ancient Japan, it was believed that the gods travelled to the human realms on horseback. People donated horses to temples and shrines to curry favour with the gods (kami). This was especially common during times of flooding or drought. When seeking the kami’s help in bringing rain, a black horse was most appropriate. For stopping it, a white one would be used.

However, horses were very expensive and not everyone was in a position to donate one. People who couldn’t afford to donate real horses used horse figures made of wood, clay or paper instead. Eventually, the tradition morphed into pictures of horses on wooden plaques. The earliest ema found has been dated to the early Nara period. The distinctive shape of modern-day tablets is due to their design in the shape of a horse stable. It was during the Kamakura period that the practice entered into Buddhist tradition. 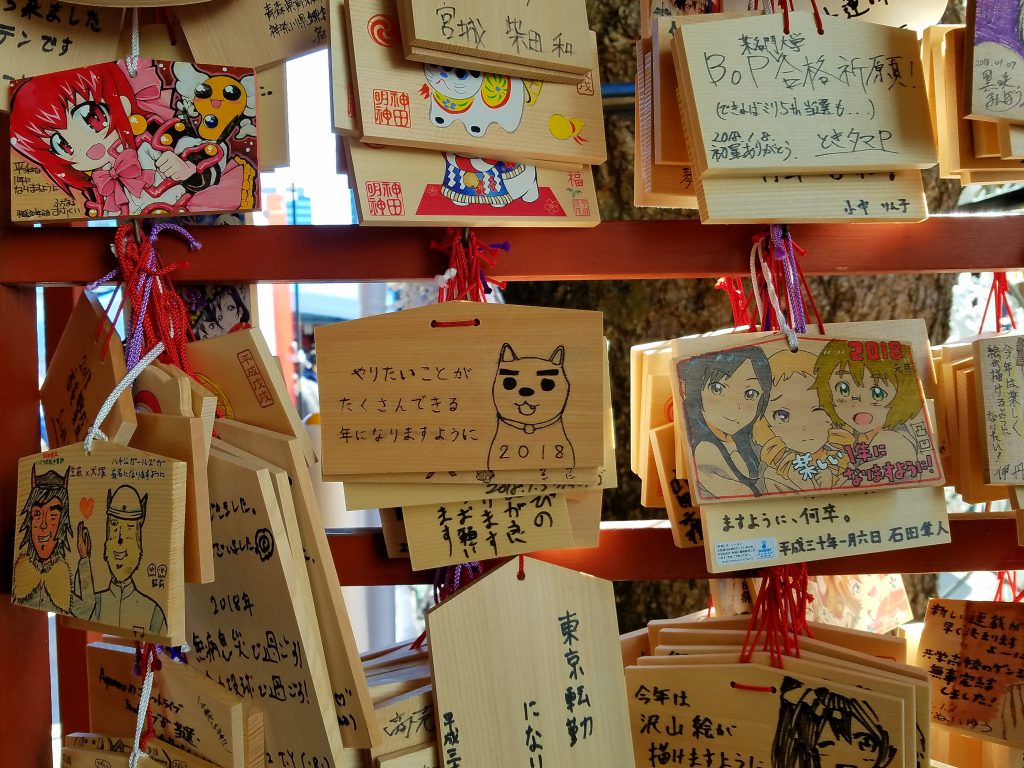 Initially only horse pictures were used, but over time the images on the votive tablets started evolving. During the Muromachi period some shrines started to display other things besides the horses, such as foxes displayed at Inari Shrines. This period saw the emergence of oema (大絵馬), large-sized ema, which were resplendent works of art in their own right. They were often a metre or more in width and height and painted by professionals commissioned by rich donors

During the Azuchi-Momoyama period there were emado, “ema halls” where various artists displayed their work. In fact, traditional ema are prized possessions for art collectors. They range from images produced by professional painters (such as the great Hokusai), with historical illustrations of classic stories and scenes from famous battles. Groups of farmers or merchants would hire a local artisan to create an ema to be donated to a shrine for a specific purpose, such as a good harvest or auspicious business. Some were painted by unknown artists, or even by devotees themselves. 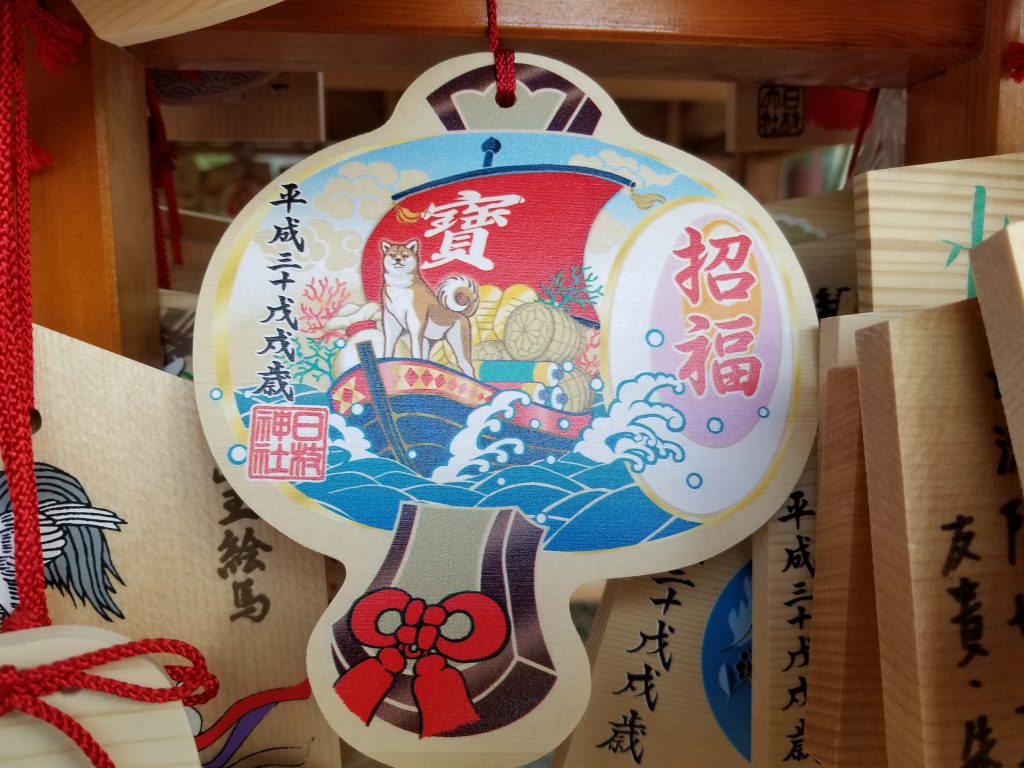 In the Edo period it became common for individuals to purchase very small plaques to communicate their wishes to the gods more conveniently. In the past, ema depicted Kannon and Jizo, but also displayed specific iconography depending on their intended purpose. These include depictions of a phallus or breasts for fertility prayers, an octopus representing the desire to be cured of warts, or a stingray for piles, sandals for foot remedies, and nettles for divorce.

The use of text has gradually replaced the overt use of symbolism in contemporary ema. The rise of literacy has encouraged guests to write their own messages, which has dramatically decreased the use of distinct ema as a way to transmit a specific wish.

There are two main types of ema: kigan-ema, which bear the crest of the shrine on their front and the word Kigan on their back, and eto-ema, which depict this year’s eto (zodiacal animal). 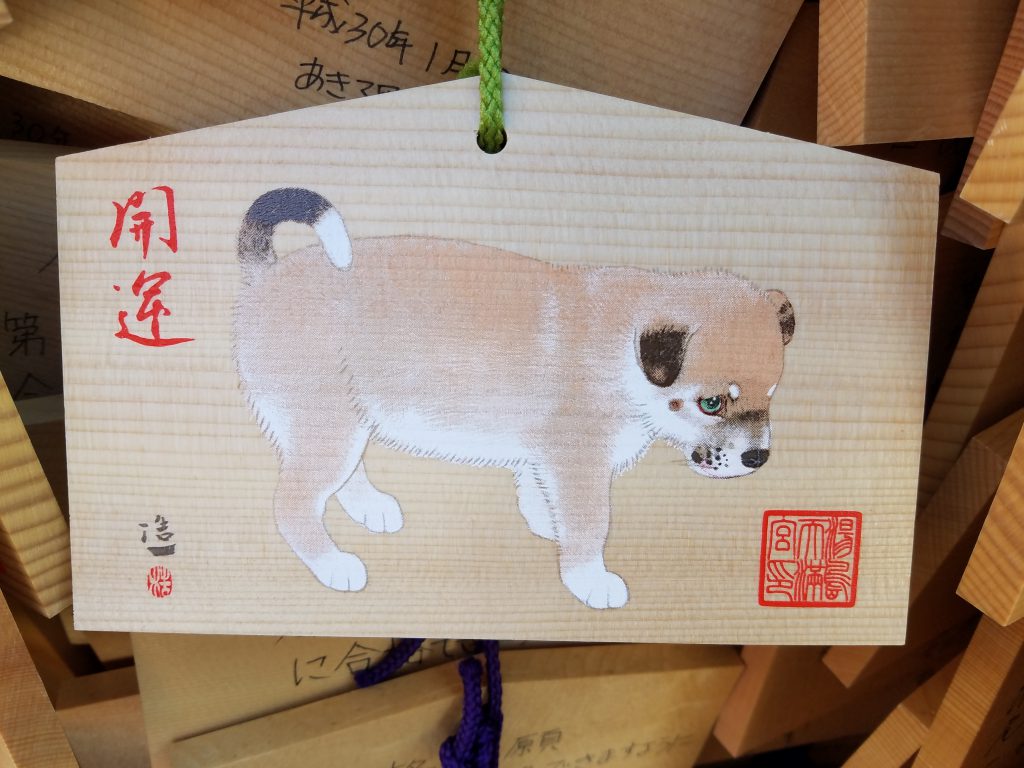 Other common motifs include the figure of worship enshrined at the religious site and scenes from the site’s foundation legend (engi), daruma, mantras, symbols of a particular deity or something related to the city the shrine is situated in. They generally also bear the name of the institution concerned and, frequently, also the specific benefits (riyaku, 利益) that may be acquired from or bestowed by the deity enshrined there, specifically gense riyaku (現世利益), benefits of this world.

There does not have to be a special occasion for writing an ema. They can be used whenever people feel they need a little assistance from the deities. New Year’s at hatsumode or before taking an important exam are popular times.  Different places of worship may be connected with different kinds of fortune and could be worth making a special journey for. 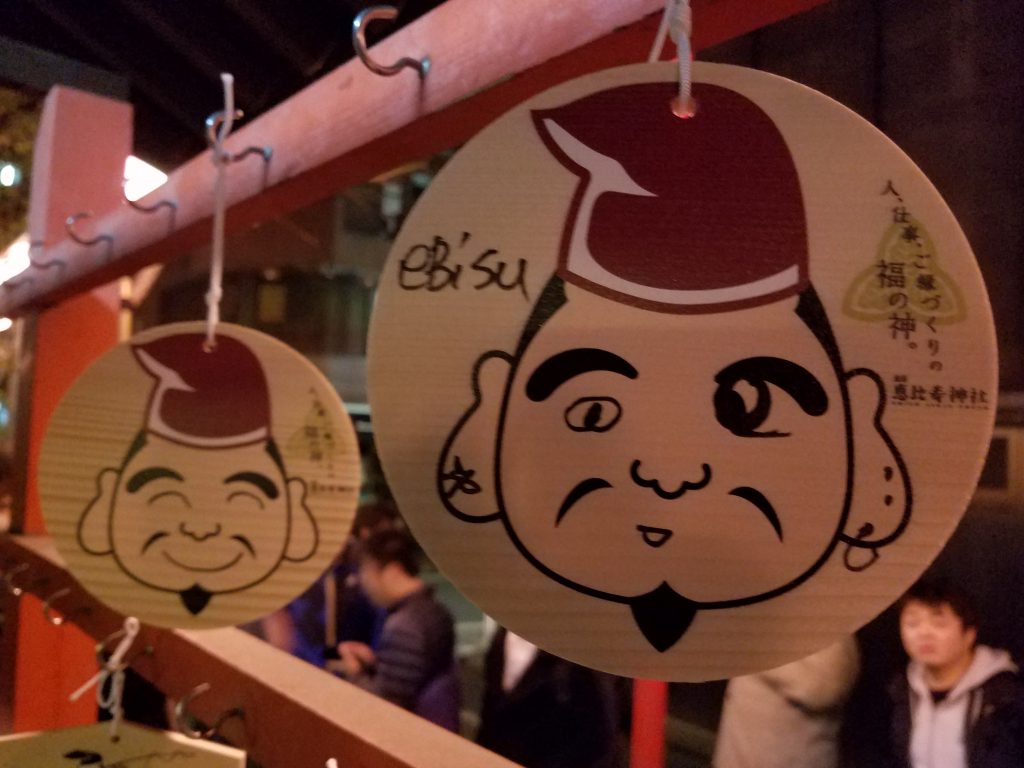 Among the various messages used on ema, yojijukugo, or four-kanji phrases, are quite common. These include 家内安全 (kanai anzen), safety for one’s family; 商売繁盛 (shōbai hanjō), prosperity in business; 健康祈願 (kenkō kigan), a prayer for health; 恋愛成就 (ren’ai jōju), success in romance. Exam-takers often write 合格祈願 (gōkaku kigan) on their tablets as a ‘prayer to pass’ or 諸願成就 (shogan joju), asking for ‘successful completion of all requests’.

When you visit a shrine, you purchase your tablet at the juyosho (amulet offices). Nowadays, ema typically cost between ¥500 to ¥1,000. There are no particular rules for writing on tablets, although it is normal to write prayers on the back rather than the illustrated front side. Some people write their names, but this is not considered necessary. In the past it was common practise to write your address, so the deities knew where to send the good fortune! After you have written your wish on the tablet you have a choice: you can take it home with you or, much more commonly, hang them and leave them at the shrine.

Unlike protective amulets, such as o-mamori (お守り) and fuda (札), which are considered to contain the sacred powers of the deities enshrined at the religious site and which are taken away as symbols of that power, ema are almost always left at the site. They are not the only objects to operate in this fashion. Various other objects such as gomaki (護摩木), which are consigned to the flames of the ritual fire ceremony known as goma (護摩) in Buddhism and hitakisai (火焚祭) in Shinto, are also are used in this way. Ema are, however, the most prevalent of all these.

Those ema that remain at the shrine are offered at mikesai, the morning ceremony held every day where the supplications are conveyed by the priests. Once inscribed with a wish, ema are hung at the shrine until they are ritually burned at special events, symbolic of the liberation of the wish from the writer and its rising to the heavens above.

We at Maction Planet hope all your wishes come true!