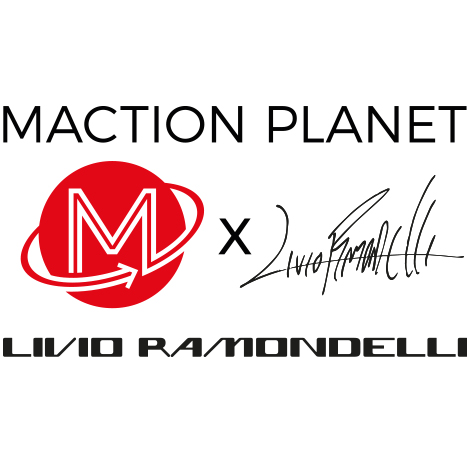 Most well known for his Transformers work, Livio Ramondelli has been a frequent visitor to Tokyo, and his designs for Maction Planet are all inspired by The World’s Greatest Metropolis.

“I cannot convey my excitement that we are working with Livio. I have been a huge fan of his for a long time and am lucky to own several commissions from him in my comic book art collection” said Mac, Founder of Maction Planet. “Each of Livio’s four designs – ‘Tower of Tokyo‘, ‘Shadow Torii‘, ‘Floating Sakura’ and ‘Electric Pagoda‘ – showcase a different side of Tokyo in a style that has not been seen before. These T-shirts are truly unique. It’s a proud moment for Maction Planet and for me personally that we are launching this collection so fans can enjoy his work and see the artistic diversity that he brings to his projects.”

“I’m thrilled to be working on these shirts with my friend Mac and the good folks at Maction Planet. Tokyo is one of my absolute favorite places I’ve ever visited, and I intend to keep returning to it for the rest of my life. If much of your life has been consuming science fiction, like it has been for me, Tokyo is an absolutely must-see destination. Mac has proved to be an excellent tour guide during my visits there, and it’s great that we can collaborate here. Each shirt was created using a mix of painting and photographic elements from photos I took personally during my visits. With them, I hoped to convey the beauty and atmosphere of Japan.”  said Livio. A special “Mac on Tokyo” interview with Livio accompanies the launch, in which Livio discusses his love of Tokyo and the inspiration behind his exclusive designs. It is available to read here.

All shirts are made from 100% premium ringspun cotton, and are available in Men’s/Unisex and Women’s styles at shop.mactionplanet.com. All shirts are fully branded with exclusive ‘Maction Planet x Livio Ramondelli’ labelling.

This is Maction Planet’s sixth collection and third major collaboration, following the launch of highly popular lines created with Ramen Adventures and Shochu.Pro.

The T-shirts will retail for ¥3,990. As with all Maction Planet Apparel, international delivery is available. Maction Planet is a Travel and Apparel business, based in Tokyo. They run Private, fully-customised Tours and Travel Experiences in Tokyo, and beyond. Guests have described them as  “reinventing custom travel” in The World’s Greatest Metropolis. Since the launch of their website in February 2017, and growing their business away from solely ‘word-of-mouth’ recommendations, Maction Planet is now ranked in the Top 15% of all Tokyo Tours on TripAdvisor, with 100% 5-star reviews – ahead of many long-established Tokyo Tour companies. They were chosen as Official Hospitality Provider to “Brave and Bold”, Tokyo’s premier Artist Alley event. They have developed a loyal fanbase, with over 3500 Instagram followers. Alongside the travel arm, Maction Planet Apparel designs unique T-shirts inspired by the city they love.

Livio Ramondelli is one of the most popular Transformers artists of all time. His credits include Transformers: Autocracy, Monstrosity and Primacy and Robots in Disguise. His cover work includes Teenage Mutant Ninja Turtles, G.I. Joe, 30 Days of Night, Dark Horse Comics, Battlestar Galactica and Pacific Rim, amongst others. Outside of comics, he provides art and designs for numerous clients including Google, Hasbro, and Upper Deck. Livio began his career in comics at WildStorm/DC Comics, working as part of the team of comics legend Jim Lee, doing design work for games such as the “DC Universe Online” MMO title. He received a Masters Degree from The Academy of Art University, as well as a Bachelor of Fine Arts from Pennsylvania State University. He currently lives in Los Angeles and travels the globe attending comic conventions.