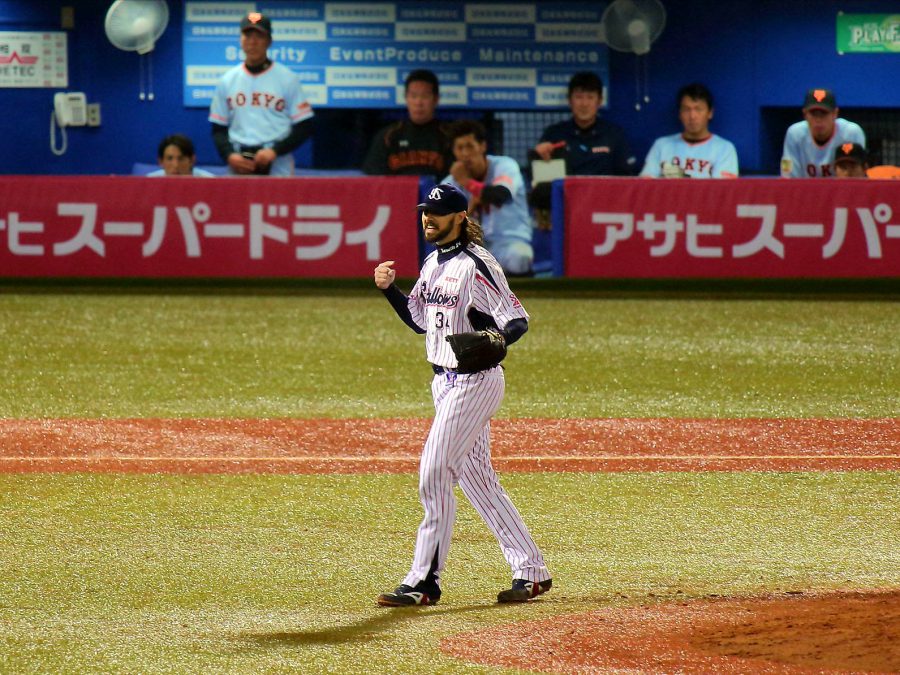 Tony Barnette is a Tokyo Yakult Swallows legend. A 10th round pick by the Arizona Diamondbacks in 2006, he moved to Tokyo in 2010. His first start saw him pitch seven hitless-innings and earn a 1-0 victory against the Yokohama Baystars. Moving to the bullpen in 2011, he never looked back – leading the Central League in saves in 2012 and 2015. In his six years with the team, he made 260 appearances with 97 saves and a 3.58 ERA. Now with the Texas Rangers, Tony has kindly taken time out of his busy schedule to talk to Maction Planet about his time with the Swallows, his feelings about the team and Tokyo, and the things he misses most about The World’s Greatest Metropolis. We are privileged to feature EXCLUSIVE never-before-seen photos of Tony in action straight from the stands at Jingu Stadium and Beyond, taken by Baseball Photographer Extraordinaire Akira Morita. Tony, Tetsuto Yamada and Yasuhiro Ogawa (along with mascots Tsubakuro and Torukuya) get ready for the Kanto Ippon-jime victory clap after beating Yokohama 4-2 on 24 September 2015. Tony had another reason to celebrate – he had just broken the Swallows’ single season saves record

Maction Planet: Tony – thank you for joining us. Let’s start at the very beginning – when was your first visit to Tokyo, and why?

Tony Barnette: Hi Mac. Thanks for having me here. To answer your question, it’s simple – my first trip was to play for the Swallows!

MP: What were your initial thoughts about the city?

TB: On the drive in from Narita Airport, I remember being glued to the windows of the van just trying to take in all the buildings and lights of Tokyo. MP: Fast forwarding now: I know it is tough to sum up the six years, but how would you look back at your time with the Swallows?

TB: My time with the Swallows is immeasurable. I learned so much about myself as a person, and as a baseball player, by being apart of the Yakult organization.

MP: How did your years in Japan affect your approach to the game?

TB: My time with  [Swallow’s pitching coach] Tomohito Itoh is what I value most. He understood me and saw potential that I never knew existed. He pushed me daily to be better than the day before. He was instrumental in helping to form the pitcher I am today.

MP: Are there any Swallows players you had an especially close relationship with?

TB: Too many to count. Over the years there was no better person to be around than Masanori Ishikawa. He is the consummate pro.

MP: We have to talk about the Championship Season of 2015, when the team reached the Nippon Series. One thing I will never forget from that season is the passion you showed on the mound. Can we talk a bit about that – how was that a function of your maturing relationship with the team, the fans and the city?

TB: 2015 had a different feel than in years past. The emotion I showed was me just being me. The guys loved it and we had a fun time with it. Our bullpen was lights out that season. [Orlando] Roman, [Logan] Ondrusek, [Ryo] Akiyoshi, and myself had a rhythm together late in the game that was so much fun to be a part of. Yakult fans deserved a Central League title and we were so happy to be able to give it to them.

MP: It had been 14 years since the last title, so we really appreciated it! Is there any one of your performances that really sticks out in your mind as a highlight during your time at the Swallows?

TB: The game I set the Swallows single season saves record. It was held by our very own pitching coach Shingo Takatsu. I had just broken his record and he met me with a giant smile and a hug. He couldn’t have been happier for me. His demeanor as a coach was very special. Tony launches another strike in the game he beat the Swallows single-season saves record – the previous record of 37 jointly held by Shingo Takatsu, Ryota Igarashi and Hirotoshi Ishiii

MP: What were your favourite away games? Any stadium or city you enjoyed travelling to in particular, and why?

TB: I always enjoyed Hiroshima. I explored that city more than others. The stadium has such an amazing atmosphere – I really enjoyed playing in Hiroshima.

MP: Hillary mentioned, in a previous edition of ‘Mac on Tokyo’, that you liked the okonomiyaki in Hiroshima! Apart from that, what is your go-to Japanese comfort food? Any other favourites?

MP: Let’s talk a about Tokyo itself. What were your favourite parts of the city, and favourite things to do?

TB: I loved Tokyo at midnight. My wife and I often rode our bikes around town when the city quieted down. We tried our best to navigate through every avenue Tokyo had to offer. Our trips around the Imperial Palace at night were always a fun night – rain or shine. We saw so much and I know we missed even more. On days off I enjoyed going to Yoyogi Park with my family and having a picnic in the park. MP: What’s the one single thing that you miss the most about The World’s Greatest Metropolis?

TB: I’m going to name two. The food and the fans. I ate so many different foods and delicacies that I miss terribly. The fans were and still are amazing. They made me feel at home. Coming in to close out the 2015 Climax championship game with the entire stadium chanting my name gives me goosebumps as I recall it. It is a feeling that I will never forget.

MP: Are you still in touch with the Swallows in any way – either the team or with former teammates?

TB: Yes I am. I still speak with old teammates, coaches, and translators. MP: That’s great to hear! Sadly for us Swallows fans, you returned to the US to start the 2016 with the Texas Rangers. What were your biggest adjustments when moving to the MLB?

MP: Do you have any advice for MLB/MiLB players making a move to Tokyo?

TB: Accept the challenge in front of you. You are the new guy. Many foreign players have come before you and none of them have changed the way things are done, so don’t make the mistake of thinking they are doing things the wrong way. Be accepting of the new. It can be scary and make you nervous. If there is one thing I learned, it’s to jump in with both feet and be a good teammate.

MP: What advice would you give to a player like [Tetsuto] Yamada who may have a chance to play in the US in the near future?

TB: Yamada is a pro. He doesn’t need my advice, nor would any player of that calibre who was thinking of coming to the MLB. There is no substitute for being yourself.

MP: That is sage countenance indeed, not just in sport, but in life. One final question: were there any  memorabilia, any knickknacks or keepsakes, from your life in Tokyo that you brought back with you to the US?

TB: I have boxes of memorabilia and keepsakes that we brought home with us. Many of them are presents from friends, fans and teammates. All are items that will bring back memories of a beautiful time in our lives.

MP: Fantastic. On that nostalgic and positive note, thank you again Tony. It has been an honour to talk to you, and we hope to see back in Tokyo soon!