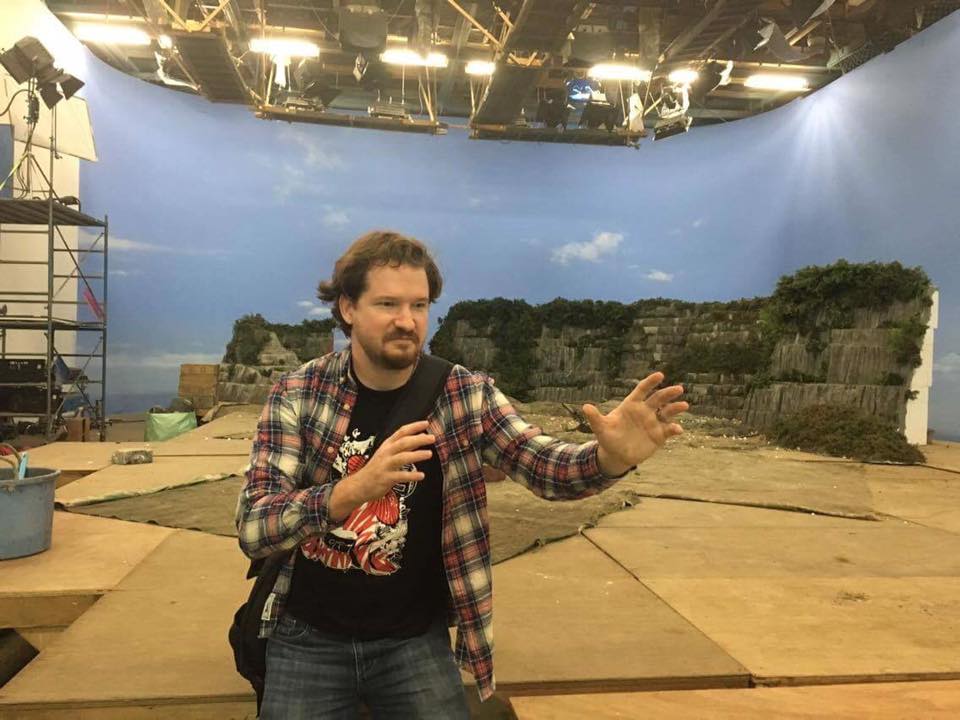 Since 2011, Matt Frank has been known internationally as the “Kaiju King,” becoming the fan-favorite artist for all things giant and monstrous. We are proud to announce a unique collaboration with Matt: a brand-new kaiju created exclusively for Maction Planet Apparel! In this special edition of ‘Mac on Tokyo’, Matt talks to Mac, Founder of Maction Planet, about the inspiration behind his exclusive design, his career and his love of The World’s Greatest Metropolis. This interview is illustrated with behind-the-scenes process shots, showing the design process from start to finish.

Maction Planet: Hi Matt. Welcome to Maction Planet. First off, I have to say it has been great working with you – a lot of fun and very energetic! Why don’t we dive straight in to talk about your first T-shirt design for our Maction Planet x Matt Frank collaboration range. Tell us a bit about what inspired the design?

Matt Frank: Thanks so much! Well, it’s actually a design that I’ve had in my head for a while. I wanted to make a kaiju-inspired shirt using a whale/gorilla hybrid. After all, those were the words that form the name of a very famous monster! But no “gorilla-whale” kaiju exists that I can think of, so it made a fun idea for a shirt. Then, when asked to make a shirt design for Maction Planet, I integrated that design into a Tokyo cityscape, and used some of my favorite landmarks. For example, I got engaged at the Tokyo Metropolitan Building (TMGB), and I’ve spent a lot of money at Sensoji! 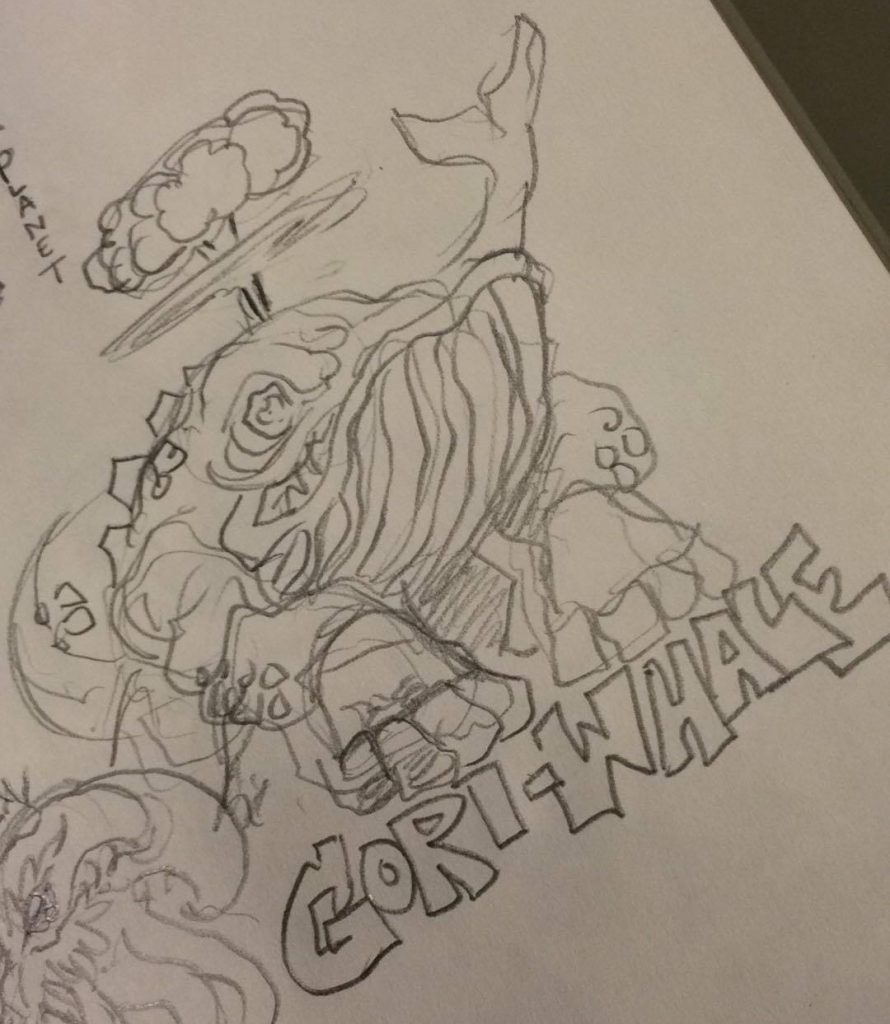 MP: I’ve been to 108 countries, and the TMGB is my favorite building in the world! Can you share the story of your engagement there? I’m sure your fans (such as me) would love to know more about that!

MF: There’s a small segment about it on a YouTube show called Sci Fi Japan TV, and it serves as the finale for the episode. I had been planning on asking my wife to get married right around that time, in 2012. And I thought that Tokyo would be ideal, since it was our first true vacation together since we started dating in 2007. My original plan was to ask her at the Tokyo Sky Tree, and I dragged our film crew with us (they were filming “Matt Frank Visits Tokyo” as an episode of their show). Unfortunately, the Skytree was shut down because the weather was overcast and windy! So, panicking, I asked my friend James what is the next-tallest building. He said the “Tocho,” or the TMGB, so that’s where we went… in the rain! I was determined, though.

We got to the TMGB and, well, the view was not great. But it was still fun and I decided to ask then and there. My new wife was very alarmed at first because she didn’t seem to expect it, but later said that she knew something was going on because I was so determined and nervous all day. It was great though, and I brought her back last year when I came to see Shin Godzilla and help release the first volume of my Godzilla comic in Japanese! 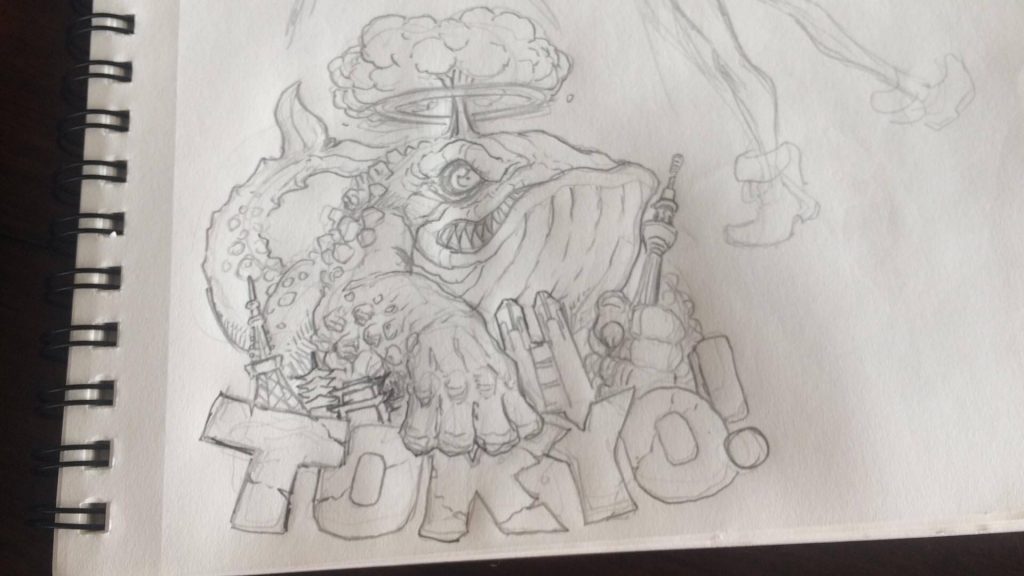 MP: Fantastic! So that’s Tocho. Now ‘fess up – what have you been spending your money on at Sensoji?

MF: Well, Sensoji is a great place if you’re looking to buy souvenirs for your friends back home! If your friends want a tea set or yukata or anything that says “Japan,” you can get it at Sensoji for pretty cheap! And of course, there’s a lot of kaiju toys if you know where to look! And Ultraman too!

MP: I suspected that the latter would feature in your answer! I often take guests to Nakamise-dori and they are very surprised you can buy Godzilla, swords and rice crackers within three shops of each other!

How many times have you been to Tokyo now?

MP: I remember Passportgate. I think that was the first time you and I talked! On to happier memories though… you’ve gotten to know the city pretty well now. Any favourite hangouts our regular spots you’ve found?

MF: Haha, Passportgate is a good name for it!

Well, there are a few places that are secret hangouts that I don’t want to talk about too much, because then everyone would go! But Nakano Broadway is fantastic, especially the Mandarake. I became very familiar with Kabukicho when staying at the Godzilla Hotel in 2015. The bars around Golden Gai are really cool as well! I think my favorite place near Tokyo is the Kaiju Sakaba in Kawasaki, and they have some of my art on the wall! Ikebukuro is also very familiar to me, since I stay at that Sakura Hotel frequently! 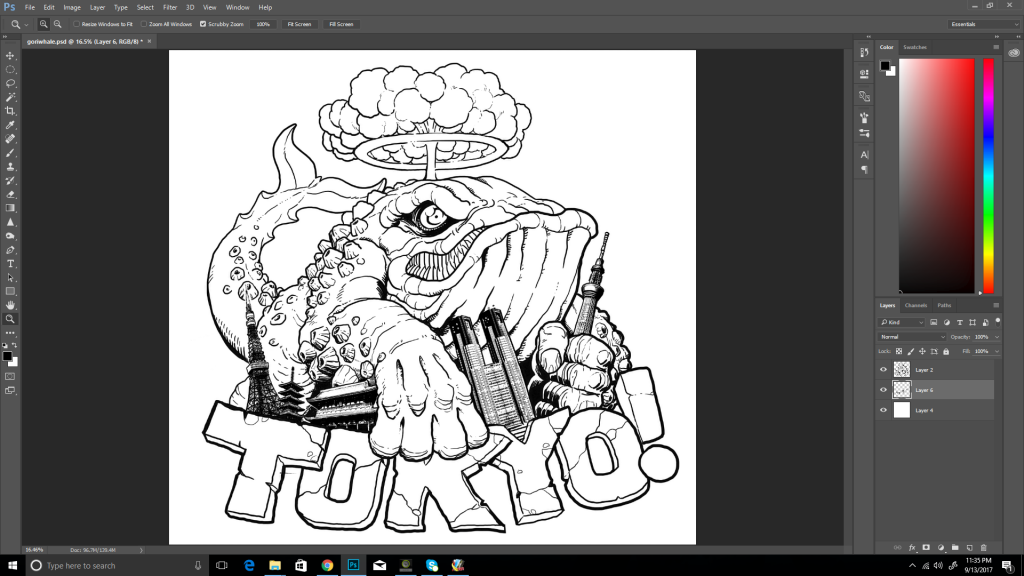 MP: I have a couple of secret Robot and Kaiji-themed bars I’ve taken some guests to on our Tokyo Otaku Tours which I’ll take you to next time you’re in town.

MF: That sounds awesome. I went to one last year and it was like kaiju-heaven!

MP: We’ve been at comic conventions together here in Tokyo, and the fans here truly love your work. How is it as an artist being on the other side of that?

MF: It’s pretty amazing, especially when you consider that these are folks who grew up constantly surrounded by Godzilla, and then they apparently really like my work, which is inherently strange since I’m an American and I’ve made a name for myself working on a Japanese property! It’s totally fantastic though and I love how enthusiastic and friendly the fans are here!

MP: At Brave and Bold Volume One last October you were sat next to Shinji Nishikawa. That was fantastic!

MF: Oh God it totally was. Nishikawa-sensei is one of my biggest inspirations. I’ve been fortunate enough to attend several events with him. He’s one of the hardest-working artists I’ve ever known! 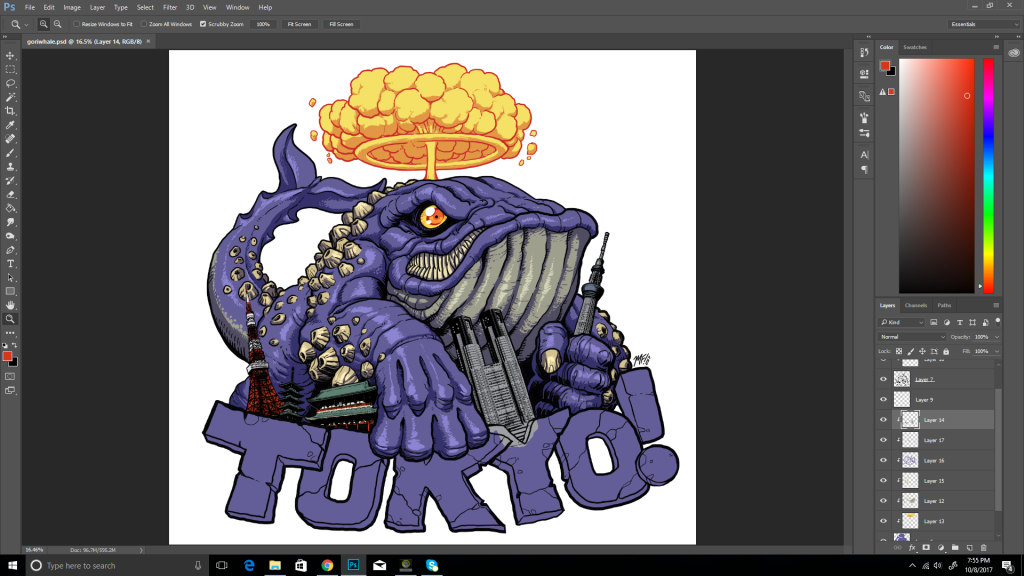 MP: Jumping around the timeline a bit… how did this all start? Where did your interest in Kaiju come from.

MF: Definitely from childhood, when I first discovered dinosaurs and fell in love with them. Godzilla was not very far behind.

MP: What was your big break in the industry?

MF: I had worked on a handful of projects before, but it really all kicked off around late 2010 when IDW asked me to contribute covers to ‘Godzilla: Kingdom of Monsters’.

MP: What has been your favourite project you have worked on?

MF: That is an extremely difficult question, but probably ‘Godzilla: Rage Across Time’ #1. I got to make an entire 20 page comic in the style of the classic Japanese ukiyo-e prints. It was a staggering challenge but well worth the results.

MP: There must have been many special moments in your career with fans or other creators. Can you talk about a few?

MF: There are far too many, but one thing that sticks out is my collection of art drawn by younger fans, usually children or younger teenagers. They’re such big fans and have so many wonderful things to say that it becomes quite emotional for me sometimes. And it happens in both Japan AND America. Recently a young lady came up to me at G-Fest in Chicago and I more or less ‘adopted’ her as a protege and now she calls me her “comic dad”! 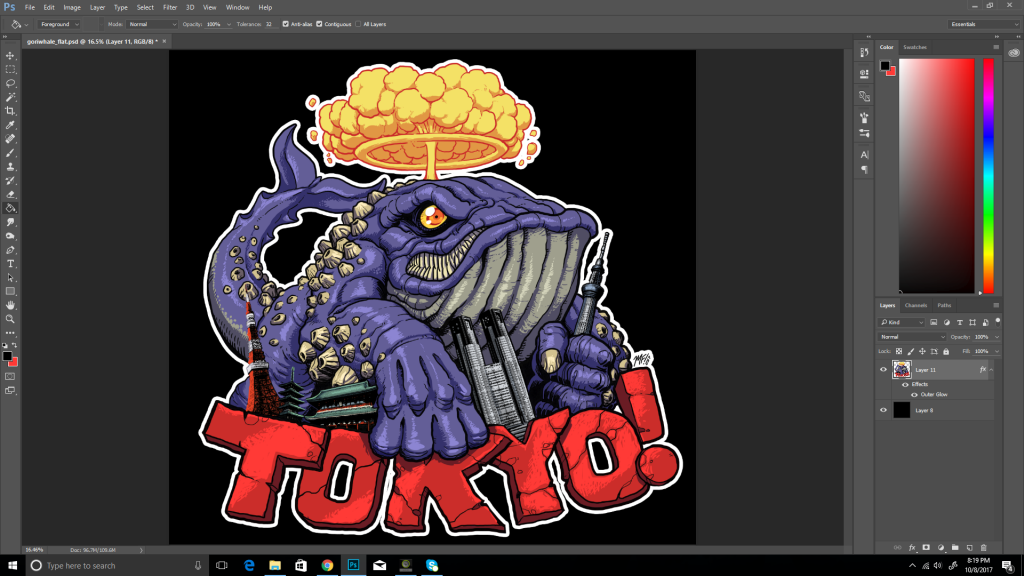 MP: Let’s talk about Goriwhale. Can you give us some insights into your design process? What is going through your head when you create a new character? “Draw… Awesome… Stuff” is not an answer, by the way!

MF: Haha, that’s true, it’s a little more complicated! Although I generally just draw whatever I think looks best at the time. Often when I’m creating a character or a design I will make little thumbnail sketches to get the general feel of the character, then make more sketches to refine it from there. Sometimes I’ll go in wild and different directions just to see how it turns out, but if the design was solid from early on, I’ll inevitably come back to that. Once a design is decided on, I start refining that until I have it at a place that I think works best, then start the final illustration.

Away from Maction Planet, can you talk about some of your upcoming projects?

MF: Well, I’ve definitely got some really cool stuff coming down the pipe, but since it’s all in holding patterns at the moment, I can’t talk too much about it. One of my main focuses right now is actually the Japanese releases of Godzilla: Rulers of Earth. I worked on that series for two years, and now I’m producing covers for the Japanese editions, as well as collaborating with some of my favorite artists. It’s really amazing and cool. Beyond that…ugh, it’s actually quite frustrating because I have so much cool stuff happening but I can’t talk about any of it yet!

MP: Well, there is one thing we can announce here! That you will be working with Maction Planet on another T-shirt design. Although, errr, we can’t tell people what that design is yet. Maybe we shouldn’t have said anything. 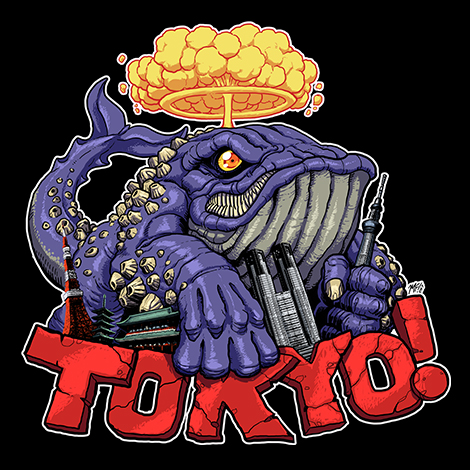 MP: Thanks again for joining us Matt. Any final words before we sign off?

MP: Well, Maction Planet is here to support that growth. Looking forward to seeing you again in The World’s Greatest Metropolis next month!

Matt Frank and Maction Planet’s brand new kaiju T-shirt featuring Goriwhale is available along with all other Maction Planet Apparel at shop.mactionplanet.com.

Maction Planet runs Tokyo Private Tours, including Tokyo Otaku Tours. The depth of Otaku experiences is diverse; checking out the insane arcades, drinking in Kaiju bars, visiting a maid cafe, shopping in the world’s largest electronic stores, heading deep into the world of models and figures, discovering amecomi (American comics) in Tokyo, paying respects at an anime shrine, searching for vintage manga, relaxing at a robot cafe, getting your inner foodie on at a theme izakaya, hunting down the limited edition merchandise and pop up eateries… and that’s just the tip of the iceberg. In true Maction Planet fashion, we also have a few secrets up our sleeves – venues that are not in any guidebook, that have no English-language information about them on the web, and no other tour company is taking their guests to!  At the end of your Otaku experiences with us you will have a deeper insight into anime, manga, cosplay and the culture that surrounds them. As our TripAdvisor reviews will attest, we will make sure you find what you are looking for. And, more importantly, you will have had a lot of fun. Join us!