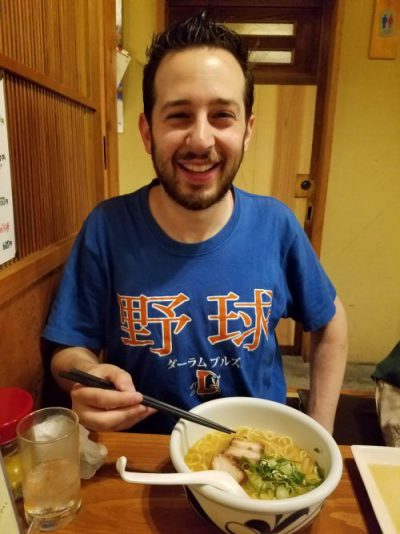 Benjamin Weber, founder of the world-renowned “Friends in Ramen” blog, took time off from reviewing Osaka’s ramen scene to talk to Maction Planet about his former home Tokyo, his favourite ramen spots and how Osaka and Tokyo compare.

Maction Planet: Hi Ben. Welcome to Maction Planet. Thank you for taking the time to talk to us about your Japan experiences and especially your love of ramen. Let’s dive straight into how you ended up moving to Japan?

Benjamin Webber: I was working in California, and though I enjoyed it there, I knew that while I was young I wanted to try living abroad. I’d always been interested in Japan, so I decided to take the plunge and come here, no job or anything.

MP: Wow. That’s very brave. What did your friends and family think of this ‘plan’?

BW: I think inwardly they thought I was a little crazy, but outwardly they were supportive. They knew going to Japan was something I wanted to try, and I had a home to fall back on in case something went wrong.

MP: What visa did you arrive in on?

BW: I arrived on a tourist visa, with just three months to figure something out or get out.

MP: And luckily you did! What was your first job here?

BW: It ended up taking longer than three months, but I found myself working as a freelance iPhone app developer.

MP: This was your first visit to Tokyo too, right? What were your first impressions of the place?

BW: I had actually visited for the first time the previous summer. I was excited to go back, but when I got there I was intimidated by all the little things, like people wearing masks and not being able to understand the cashiers at McDonalds.

MP: But it wasn’t enough to put you off! Was it in these early days that your love of ramen began?

BW: It was that first time living in Tokyo where it really bloomed. I had enjoyed ramen when I was living in America, but I hadn’t imagined the variety and wealth of different bowls that could be found all in one place.

MP: What were the first styles that you fell in love with?

BW: I didn’t know the difference at first, but as I tried more, I found myself gravitating towards miso.

MP: As you got to know Tokyo, what became your favourite spots?

BW: I love spicy food, so once I visited spicy miso shop Kikanbo, it became hard to top. They let you choose how much hot pepper and how much numbing pepper are in your bowl, which won me over.

MP: What other recommendations would you give in Tokyo for different styles?

BW: Tokyo pretty much has everything. Aside from miso, I found myself pretty addicted to tsukemen. On top of being the home of tsukemen, Tokyo is also where the double soup style originated. I ended up going to a number of shops to try it, my favorite being Fuunji in Shinjuku.

MP: Double Soup. That’s why we call it The World’s Greatest Metropolis! Well, one reason anyway. Outside of ramen, what are your favourite Tokyo spots our things to do?

BW: I like to walk around and explore the city, so I’m always looking for interesting places that have a lot going on. Kagurazaka and Shimokitazawa are fun parts of town with people, good food, and lots of interesting shops.

MP: Shimokitazawa is an area where we lead a lot of “Backstreets of Tokyo  Experiences”. Guests love the vibe there – with some really great ramen and craft beer to help fuel the journey around the retro shops and quirk arts scene!

What drove the move to Osak BW: I really enjoyed living in Tokyo, but I got a job in Osaka, and so I moved down to Kansai.

MP: And that’s when you started Friends in Ramen?

BW: That’s right. I had relied on English language blogs and ramen information when I was in Tokyo, and I was surprised to find nothing when I moved to Osaka. I decided I would try to fill that void, and Friends in Ramen was born.

MP: It’s a fantastic site. Has it opened up any ramen-related opportunities for you in Osaka?

BW: Thanks! My site has gained visibility over time, and I’ve been fortunate enough to have been interviewed on TV and in the newspaper, in addition to being introduced to a yearly industry dinner.

MP: Well-deserved recognition. I have friends in China and Korea who go to Osaka, and regularly consult your blog on the best places to eat. Talk to us about the TV appearances! Were they fun? Did you feel the pressure? Any interesting anecdotes?

BW: They were pretty fun, but I forgot how nervous I can be in front of a camera. One time instead of asking the ramen shops if we could film there ahead of time, they had me go and ask them on camera. I was taken by surprise; I felt like a jerk barging in asking if it was OK, but all the shops were really accommodating.

MP: Brilliant! Well, maybe not for you at the time! Have you become a local ramen celebrity? I went with Tokyo Ramen Guru Brian (MacDuckston) to Trick in Yokohama a couple of months ago, and one of the staff members got very excited and started taking photos of Brian crushing the bowl!

BW: Haha nothing like that, but these days when I go to a ramen event someone I’ve met in the industry will inevitably stop me to say hi.

MP: Great. Any plans for the direction of Friends in Ramen for 2017, and beyond?

MP: Sounds like a plan. Alright, final question: Tokyo vs Osaka? Choose carefully – remember you are talking to Maction Planet here – “We Are Tokyo”… “The World’s Greatest Metropolis” etc etc

BW: Ah that’s a tough one…so I’m going to go with a cop-out. When I first moved to Osaka I missed the it-has-everything feeling of Tokyo. Over time though, I started to appreciate the compactness of Osaka, and the shorter commute. I will say though, although Osaka has plenty of great ramen shops, nothing can match the density of Tokyo for high quality noodles.

MP: Reading between the lines, I think you gave the correct answer. And on that diplomatic note, thank you Ben for talking to Maction Planet. We will keep up with Friends in Ramen as always, and look forward to your next visit to Tokyo.

BW: Thanks a lot!

Maction Planet runs Tokyo Food Tours, where ramen often forms a part of the delicious itinerary. We guarantee that no other tour groups are going to the unique, local areas we are exploring. We are redefining the “off-the-beaten-track” experience in The World’s Greatest Metropolis. Join us! Email info@mactionplanet.com to arrange yours.