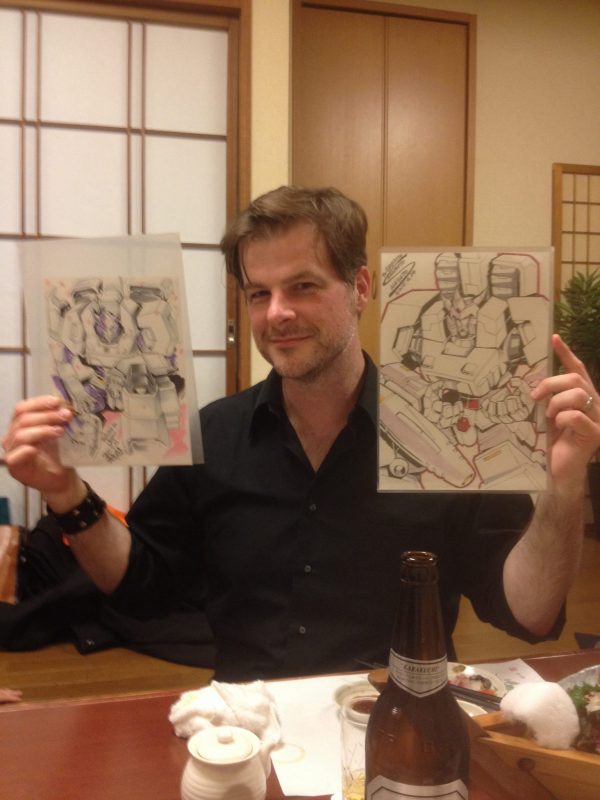 World-famous artist Andrew Griffith, currently working on Micronauts for IDW, is best known for his epic eight-year run on Transformers, helping establish a new era for the franchise. Mac, Founder of Maction Planet, talks to Andrew about his current and former projects, the strangest gifts he has received from fans and why Tokyo might just be his favourite travel destination in the world.

Maction Planet: Hi Andrew. Welcome to Maction Planet. Thank you so much for your time today. I know you’re very busy right now with some great new projects. Can you tell us a bit more about them?

Andrew Griffith: Well I am currently working on a series for IDW Publishing. The series is called Micronauts, which was an American version of a late 70s/ early 80s toyline known as Microman in Japan and a successful Marvel comic as well. This is the modern version we are cooking up. Before this I was a regular Transformers artist for about eight years.

MP: I know many people are looking forward to seeing your take on Micronauts.

Having been to Tokyo a few times now, you must have a few favourite or regular spots you try and hit up on your visits here. Can you share them with us? Andrew Griffith in Tokyo at his new favourite cocktail bar!

AG: Well I suppose it depends on what I’m looking for. The geek side of me always likes to get to places like Akihabara and Nakano Broadway. I love to find random vintage items that would fit into my collections. When I go drinking I love the casual laid-back, yet unpredictable atmosphere of Golden Gai in Shinjuku. Those are some of the regular spots that I make sure to get to each time I visit.

MP: Clearly you’ve gotten to know the city pretty well to have your favourite haunts! What are the aspects of Tokyo that make it one of your favourite places to visit?

Partly it is how modern and bustling of a city it is, combined with the old world charms hidden amongst it like the temples and historical sites. It’s also the great public transportation systems, the food, how polite the people are. And how clean it manages to be for a city of its size! Plus it just has this arcade-like energy and feel to it with so many different neighborhoods to explore full of new noises, lights and distractions.

MP: On your last time trip to Japan you actually did two nightlife tours with Maction Planet. Thank you so much for choosing us amongst the many choices that you have for Tokyo tourism.

AG: Oh, of course. I had a great time. I’m always anxious to check out the nightlife of a city like Tokyo that has so much to offer. And I always like being taken to the best places to have a good beer. MP: Given that you had such a long run on Transformers, are they any ways the cityscape of Tokyo has influenced your art?

AG: Oh definitely. I remember when I was visiting Tokyo with my friend Livio [Ramondelli] the first time, we went to the New York bar at the top of the Park Hyatt. (Movie fans may recognize it as the bar where Scarlett Johansson met Bill Murray in Lost in Translation.) From there we had great aerial views of the city and I took some photos of an area
in Shinjuku that had almost a city block worth of empty space surrounded on four sides by skyscrapers. Later when our Transformers comic was set in Tokyo for a bit I used that empty space as the location of a fictional skyscraper that belonged to a corporation in our story. We actually utilized a number of Tokyo locations including Golden Gai and some of the underground walkways and malls found around the Metro stations.

Your work on Transformers is very much loved in Japan. Can you tell us your thoughts on the fanbase here?

AG: I have to say that the Japanese fans I have met must be among the best fans in the world. I’ve been over to Japan about five times now for conventions and there are so many fans I’ve met that I now consider friends. They are so kind and enthusiastic to have me and other artists that visit and always make us feel so welcome. They are a large part of why Tokyo may be my favorite travel destination in the world.

MP: I know they like bringing gifts. What’s the strangest thing you’ve ever got from one?

AG: I think socks may be the strangest thing I’ve gotten. I’m always amazed by the gifts. So many tasty snacks and items that are so well-designed, and everything is always packaged so tastefully. I’m always overwhelmed by the generosity. My wife and I love umeshu so we are always happy to receive that as a gift.

MP: Let’s talk favourites, and least favourites. On your eight year run on Transformers, what was your favourite issue or storyline to draw?

AG: It might be the one shot I did with John [Barber] where Marissa, Buster and Thundercracker save the White House from Dire Wraith infiltrators. It was like a big dumb action movie.

AG: I would have to say Thundercracker. I always liked him as a kid because he was more conflicted and wasn’t 100% sure about the Decepticon cause. And I have to say what we have done with him and Buster in the comics has been really fun. As for least favourite, I would have to say Getaway from the Lost Light comic. Just such a complicated design to draw!

MP: You have redesigned a number of Transformers. What’s your process for doing that?

AG: Well I usually start with figuring out what their alt mode will be, and then I’ll look at previous versions of that character to try to figure out how much of their character I need to recreate to make it feel like it’s still the same character. Then, I’ll use the alt mode and the essence of the character to try to figure out how to break up the parts of the alt mode into corresponding parts of a robot and make it seem like it could have transformed. There’s definitely a bit of engineering involved. And a good bit of sketching and re-sketching until the right proportions are reached.

MP: You have recently moved to Peru! Talk to us about that – how has the transition been?

AG: It’s definitely been a bit of a change. In some ways it is more relaxing in the US, in some ways more stressful. That may be partly culture shock. But the good thing is that I have gotten set up and I am able to work from here the same as I was able to in the US. Who knows, maybe next I’ll move to someplace like Japan or Europe!

MP: Will the fans be seeing you at any conventions globally this year?

AG: Definitely! I don’t know if I’ll be making it to Japan this year. Though that could change, and I hope it does! But so far I have conventions planned in other parts of Asia, South America and a few shows in North America. So I’ll be busy for sure.

MP: Well, we hope to see you back here soon, Thank you for joining us Andrew. Any final words?

AG: I just want to say thanks to Maction Planet for having me for this interview. And for showing me parts of Tokyo I had never seen before the last time I was there. It’s one of my favorite cities in the world and I can’t wait to get back. In the meantime all of my fans can feel free to pick up my current series “Micronauts: Wrath of Karza” out right now from IDW Publishing. Transformers fans may enjoy it as well because a few Transformers are also part of the story. Thanks everyone, keep reading and keep exploring!