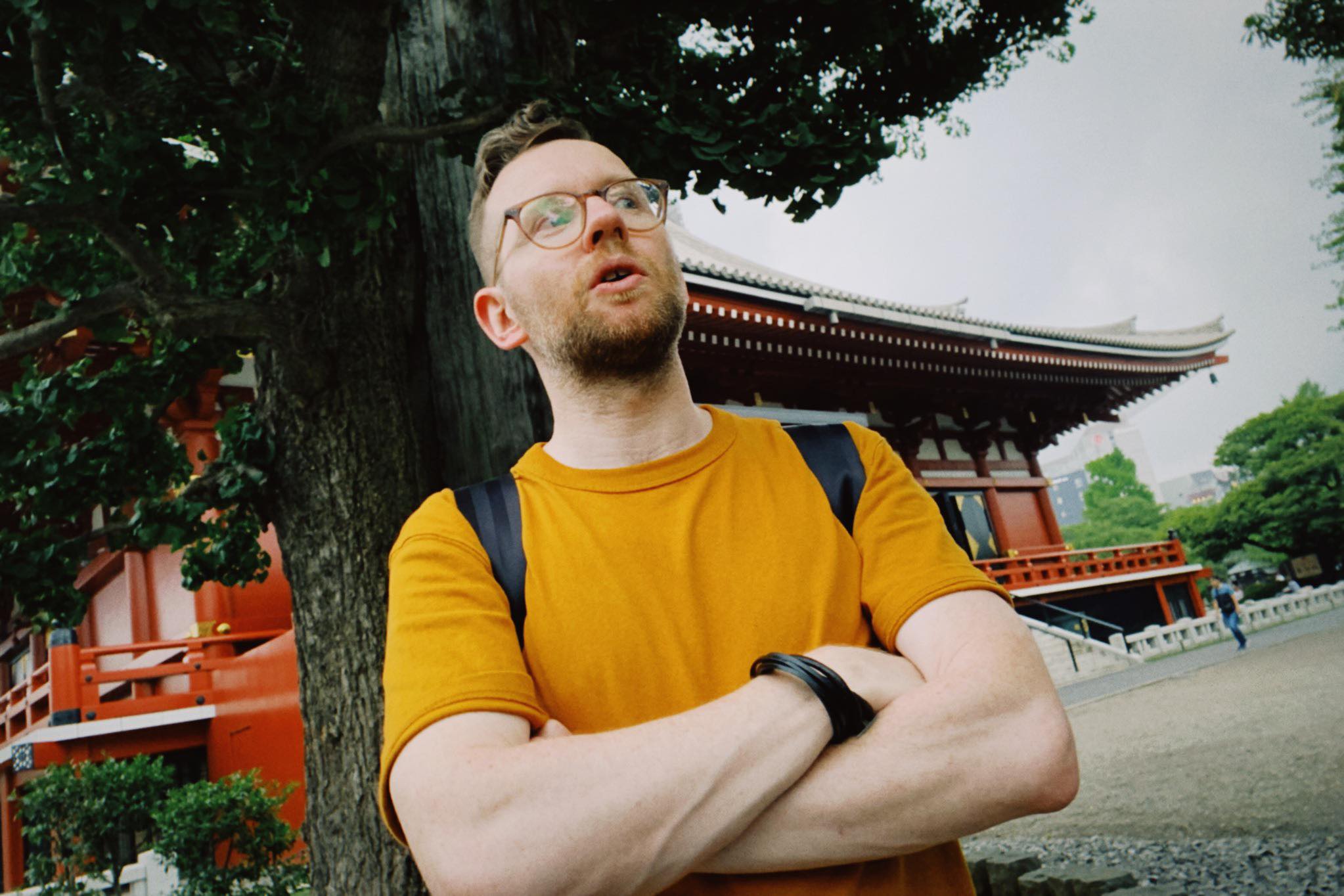 Filmmaker Adrian Francis is currently in the final stages of producing ‘Paper City’, a documentary telling the story of three survivors of the horrific 1945 Tokyo Firebombing who are fighting to leave behind a record of this forgotten tragedy – before the last of them passes away. To finish the film in time for a 2020 release – 75 years after the bombing – the makers have launched a crowdfunding campaign, which runs until March 30 2020. We caught up with Adrian to discuss his journey to Tokyo and the making of this important film.

Maction Planet: Tell us a bit about your Tokyo journey. Why did you move here?

Adrian Francis: I first came here in 2000 with my Japanese partner, who I met while we were both living in Sydney. After three years here, I moved to Melbourne, where I studied Documentary Filmmaking at the Victorian College of Arts. After making a few short films in Australia, which met with some festival success, I moved back to Tokyo wanting to make a feature, maybe some kind of portrait of the city.

MP: Talk to us about the origins of this project.

AF: It really started when I watched “Fog of War’, a documentary by the American filmmaker Errol Morris. I loved the film, but there was one scene that really floored me—the details of the 1945 Tokyo firebombing; 100,000 deaths, mostly civilians, many of them women and children, burnt to death in a firestorm. The worst air raid in history. Until this, I’d been only half aware that cities other than Hiroshima and Nagasaki had been bombed. Growing up in Australia, our war education focused on the Allied experience, and the awful things done by Imperial Japan.

When I began asking Japanese friends about the firebombing, many of them knew only that Tokyo had been attacked, not the scale of death or damage. I couldn’t really see any remnants of the damage in the city itself, or obvious memorial or museums. It seemed like  a kind of public amnesia. I wanted to understand why. And that was where Paper City began.

MP: The Tokyo firebombing occupies a strange place in the WWII narrative. Neither side talks about them. Clearly this is a complex subject but why do you think that is?

AF: You’re right. It’s a very complex thing. I have my own ideas, as do many of the survivors that I met in the course of working on this film. At the end of the war, ordinary civilians were focused on very immediate needs – food, shelter, the means of survival. And as the economy thrived, there was no great desire to look back on the pain of the war years. Of course the Japanese and US governments each have their own reasons for not wanting to dwell on the past. But the survivors can never forget. And they want to make sure that what they endured is not forgotten by the nation – not only to honour the loved ones they lost, but to hold governments and militaries to account. For decades they’ve been campaigning for a public memorial and peace museum like Hiroshima, but to no avail.

MP: What have been the biggest challenges you’ve faced over the course of your five years of filmmaking?

AF: Language was a huge challenge. My Japanese is passable in everyday situations, but working with elderly people and the vocabulary of war was a real stretch. Many times I’ve watched back footage that I now understand and wished I’d responded differently to what someone said at the time.

Another big challenge, which we are just beginning to deal with in the editing, is how to translate these stories into a cinematic experience. The survivors’ stories are harrowing, but it can be difficult for those of us who’ve only known peacetime to relate to their experiences. As filmmakers, our job is to use tools – editing, archive, sound design – to craft a compelling film that will really tug on people’s emotions. 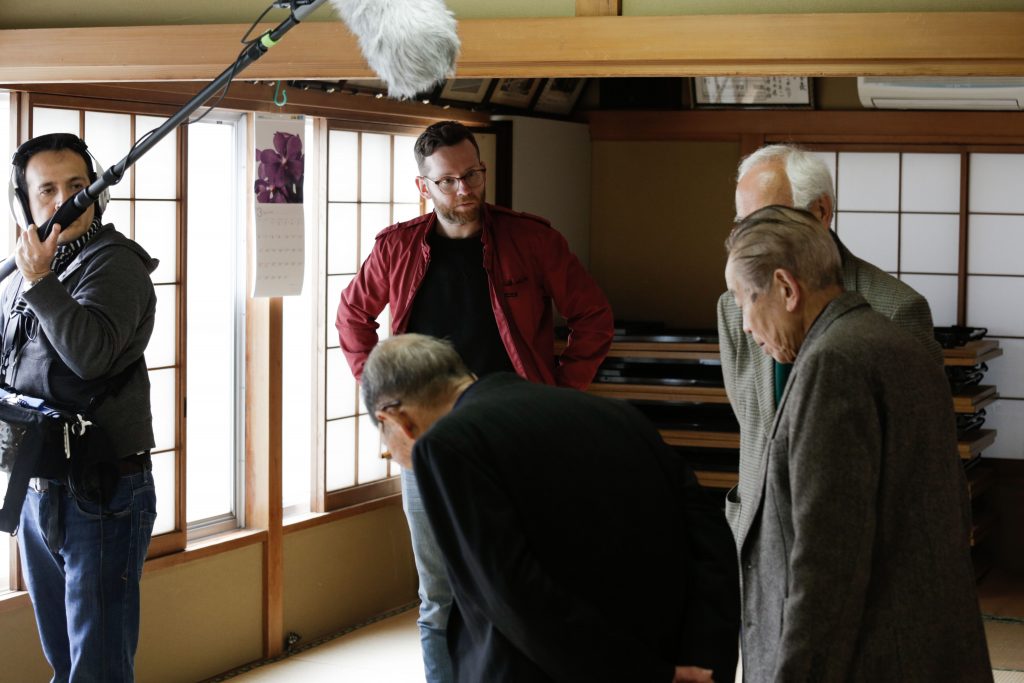 The crew on set during filming for ‘Paper City’

MP: Why have you decided to crowdfund the final stages of the project?

AF: It’s been five years since my producer and I first started working on Paper City. At times it’s been a long and lonely road, especially to get it financed. While we’ve had great feedback from funding bodies and distributors, not many are willing to take a risk on someone making their first feature – especially a project about old people and war memories. Crowdfunding will help us complete the film ready for the second half of 2020, which is a really important year for this project – not only because it marks 75 years since the 10 March 1945 Tokyo bombing, but also because the whole world’s eyes will be on Tokyo for the Olympics. I think there’s never been a better time for us to get this story out. Now that we’ve launched the crowdfunding campaign, it’s also very exciting, because people start to feel like they are part of getting it made.

MP: Why should people back this project?

AF: I think that in this case, we’re not simply asking people to help us finish a film project. What we’re really asking them to do is to help save the Tokyo firebombing from historical obscurity – by passing on the survivors’ stories, not just to the next generation, but also to the many, many people outside of Japan who have never heard of it. These survivors are among the last people with a living memory of WWII. After they’re gone, how will we know the truth of what happened? With the government doing nothing to preserve the public memory of the firebombing, at least through storytelling, through documentary film, we can preserve at least something of what they know.

MP: What has been the reaction of your Japanese friends to this project?

AF: Their reactions have varied. I think some of my younger friends in particular wonder why the hell I want to make a film about something they feel is ancient history. Others who know about the impact of the Tokyo firebombing, or have some kind of familial connection to it, have been very supportive. Some of these people are quite moved by the fact that a foreigner – rather than a Japanese director – wants to preserve the wartime memories of ordinary Japanese civilians.

Kiyooka-san, a Tokyo Firebombing survivor, stands on the Kototoi Bridge (the same bridge as in the Header Image)

MP: What are you hoping is the lasting legacy of this project?

AF: I hope with this film we will carry the survivors’ stories to far beyond their current sphere of influence – to audiences all over the world.​ ​

Many of the psychological wounds that were opened in WW2 continue to fester, causing pain to individuals and families and mistrust between nations. But my hope is that Paper City will encourage dialogue about the past between younger and older generations, and between people from different countries. Above all, we want to promote peace, empathy and understanding—especially when civilians continue to be targeted in contemporary conflicts.​ ​

But this is also for the survivors themselves. For those who are still alive, I want them to know that they are being listened to—and that this film will be part of keeping their memory alive even after they’ve gone.

MP: Thank you for joining us Adrian. All the best for this important project.

To support Paper City during its crowdfunding campaign, click here.