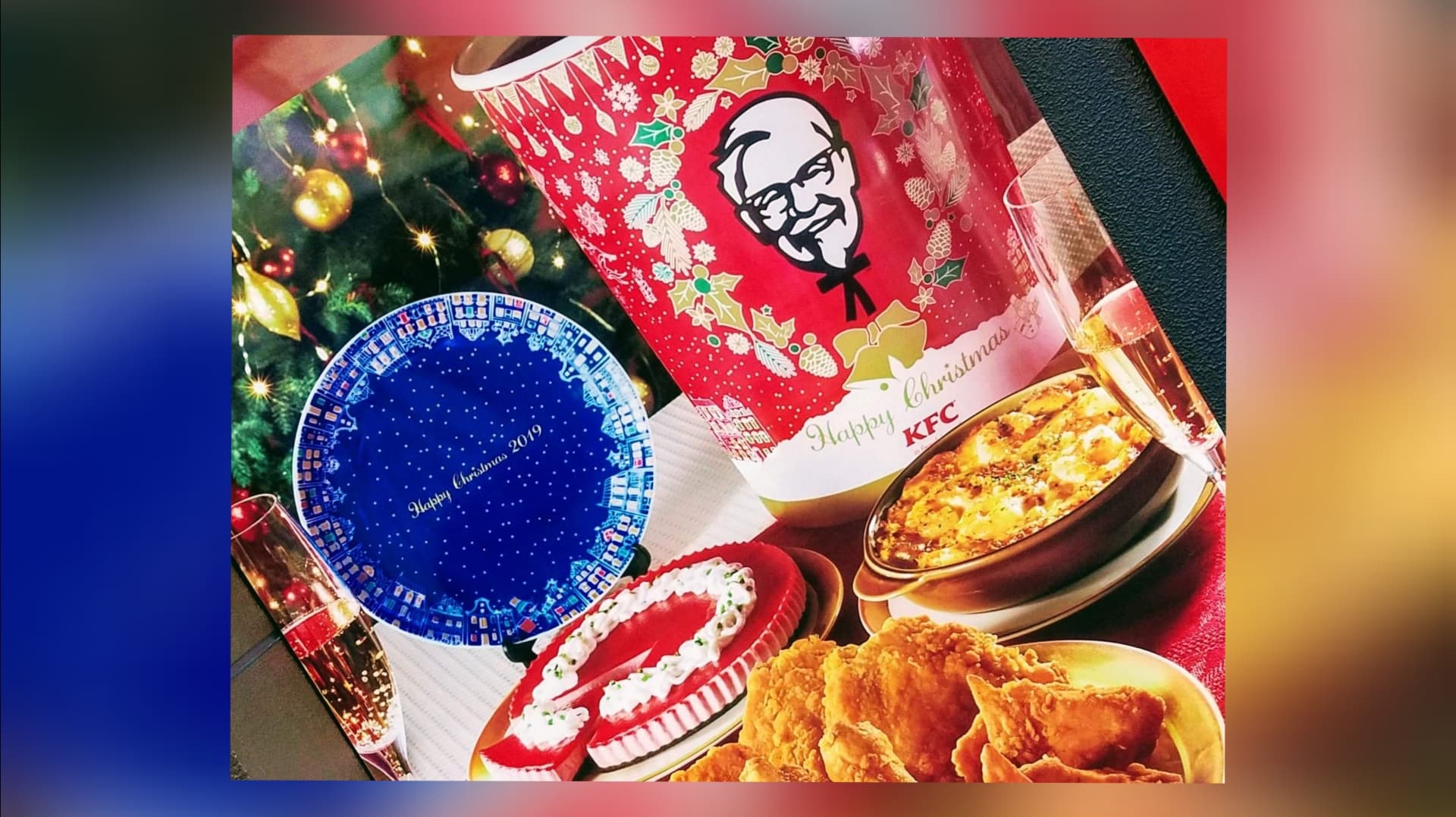 Tokyo Taste Test #005 is a blast from the past, presenting historic archive footage of Mac testing KFC Christmas Pack A from 2017! Learn more about the history of KFC in Japan, how it became the ultimate Christmas tradition, and find out Mac’s reaction right here.

The biggest Christmas tradition in Japan is eating KFC. Until you are on the ground here, it is difficult to conceive of exactly how important it is to people. Around 3.7 million Japanese families eat KFC at Christmas. If you want a piece (or several) of the action, then you need to plan ahead. Orders can be placed from early November, and people queue up in long lines to get their Christmas Packs Barrels.

Why does a country whose gastronomy is a UNESCO Intangible Cultural Heritage flock to Kentucky Fried Chicken for the festive season?

The History of Christmas and KFC in Japan

The ‘KFC Christmas’ was the brainchild of Harvard-educated young entrepreneur Takeshi Okawara, who was inspired by Colonel Harland Sanders, the founder of KFC. Okawara managed the first KFC in Japan, opened in Nagoya in 1970, and he went on to become CEO of KFC in Japan from 1984 to 2002. However, he and the chain were no overnight success story.

The KFC that Okawara opened failed so miserably that he was left sleeping on flour sacks in the store to save rent. Okawara clearly knew he needed something to put KFC in Japan on the map. There are different versions of the story that abound, with conflicting legends even on the company’s official websites. Here’s the Maction Planet distilled version, which some anonymous sources have confirmed is as close to the truth as we’ll ever get…

A foreigner from a nearby Catholic kindergarten walked into the store one day. She wanted some fried chicken for a Christmas party to be delivered by someone dressed as Santa. Okawara took up the challenge and was a hit with the kids. His dancing talents were called on by several other schools.

At this point in the official story, Okawara has a dream where a foreigner says how he can’t get turkey for Christmas in Japan. In any case Okawara felt he was onto something, and he started selling a Christmas ‘party barrel’. No turkey, just fried chicken.

After success in Okawara’s store, the promotion went nationwide in 1974 under the name ケンタッキーはクリスマス！(Kentucky is Christmas!). A substantial advertising campaign positioned KFC as a genuine, sophisticated way to celebrate Christmas in true American style.

Today, KFC’s Christmas meals contain more than just fried chicken. Premium barrels include options such as ribs or roast chicken with stuffing. Many packages contain cake, which has been a key part of Christmas in Japan since before KFC’s expansion in the country.

The magnitude of ‘Kentucky is Christmas’ cannot be understated. Around 800,000 Christmas packs and 300,000 party barrels are sold, around 35% of KFC Japan’s total annual sales!

The Colonel’s influence has reached far and wide, and many have tried to get in on the action, including MOS Burger and the convenience stores.

So what does it actually taste like? Find out in the video below!

If you like your KFC history accompanied with fresh servings of the latest Japanese Music we have you covered. Maction Planet Resident DJ Royce Leong and Mac discussed the origins of this remarkable custom in Tokyo ON #027, which you can listen to here.