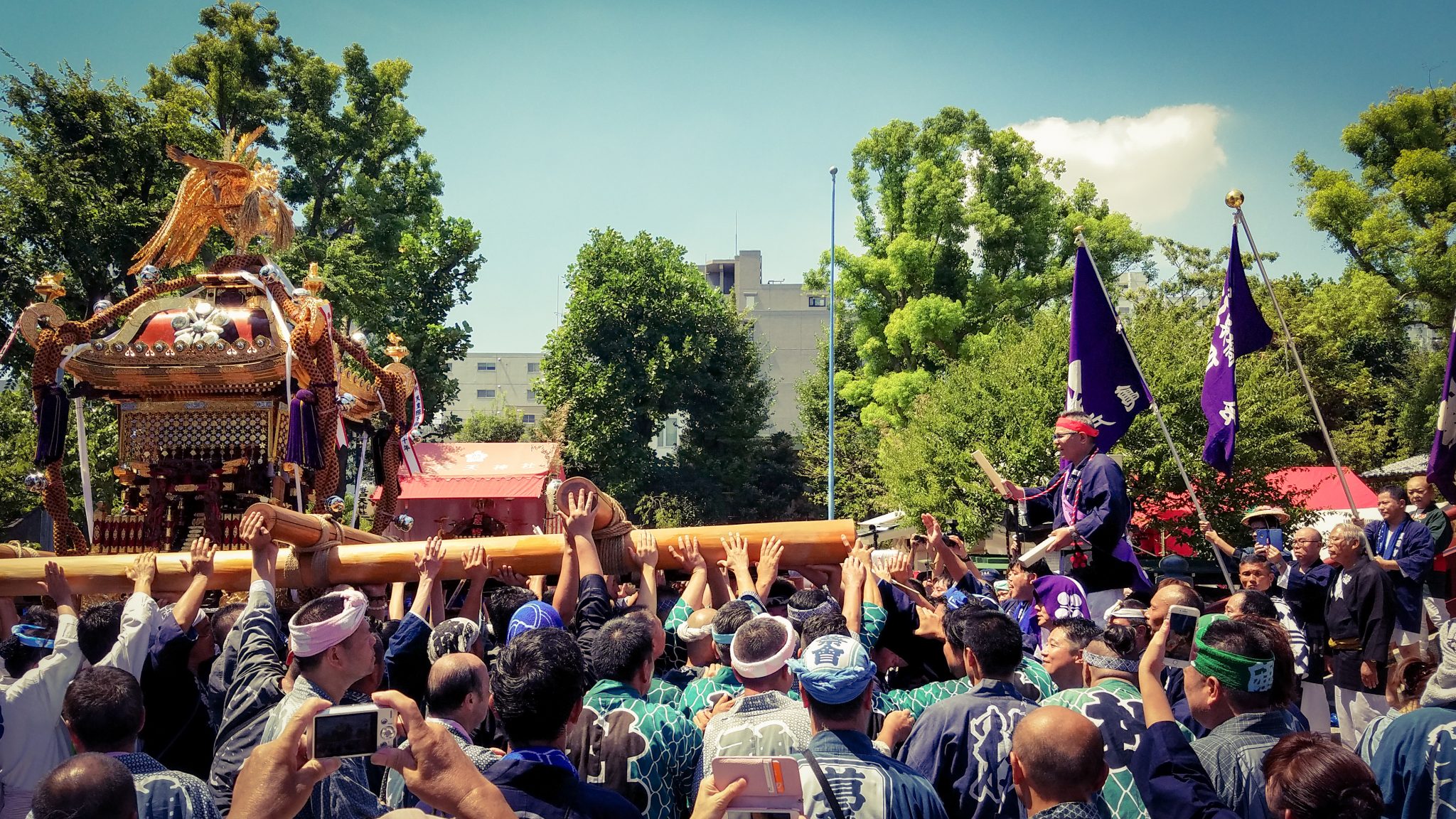 Share in the experience of the 2018 Kameido Tenjin Matsuri in the latest video on Maction Planet YouTube Channel. Mac, Founder and Lead Guide of Maction Planet, tell us more!

My guests and I had an amazing time at the Kameido Tenjin Matsuri on Saturday 25 and Sunday 26 August 2018. Kameido Tenjin is located in Tokyo’s Koto Ward on the east side of the city, commonly known as shitamachi (the downtown). The final weekend in August is a busy weekend for matsuri, dances and other festivals in town. While the crowds meant you could hardly move in other parts of Tokyo, we had an absolute ball interacting with the locals in this historic suburb. We (finally) made the video for your viewing pleasure. Think of it as a virtual tour of off-the-beaten-track Tokyo, to be enjoyed during these times of lockdown.

2018 was the Reitaisai grand festival, held only once every four years. The Grand Festival features parades of the Imperial Carriage, Horen, and local mikoshi (portable shrines containing the kami or god and ornamented with a golden phoenix on top). Each mikoshi is dedicated in front of the Main Hall of Kameido Tenjin shrine on the final festival day.

On 25 August, we witnessed the procession of the Horen (Sacred Imperial Carriage). The spirit of the kami, Tenman Tenjin, is transferred from the main shrine into the carriage for the festival. There is an incredible parade of people in costume, horses and even a bull pulling a horen (portable shrine) through the neighbourhood! 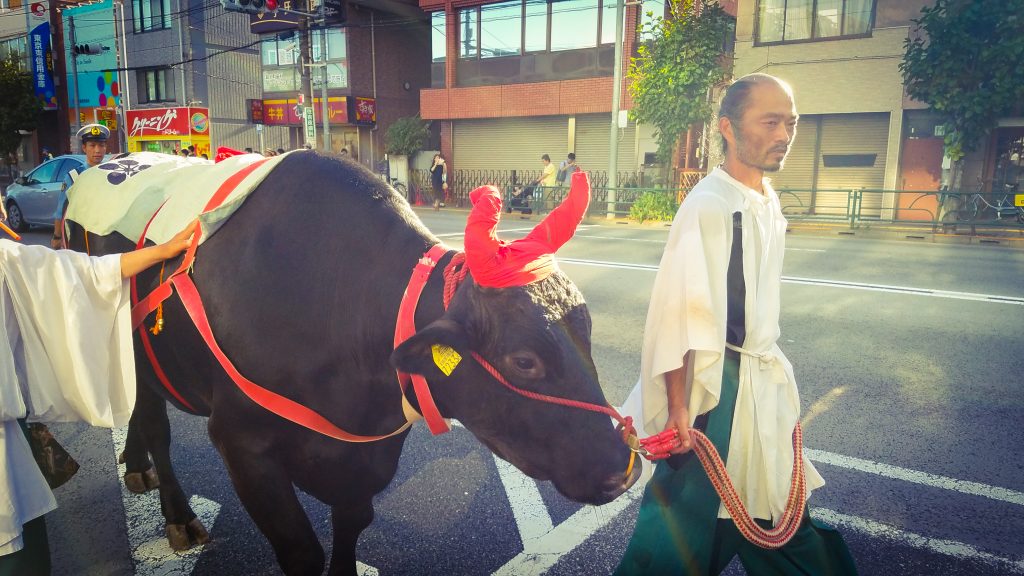 We also saw the procession of children and, at 17:00, the Shinto ceremony to bless and give thanks to Tenman Tenjin in front of the main hall of Kameido Tenjin Shrine.

The Shinto ritual of purification (harae) is performed to cleanse participants before the kami and acknowledge their safe return to the shrine. An assistant priest tends to the food offerings to sustain the kami, such as rice, sake, (rice wine), rice cakes, fish, meat, seaweed, sweets, fruits, vegetables, salt and water. The Head Priest of Kameido Tenjin Shrine then chants a ritual liturgy (guji).

In the evening we saw a firelight Kagura Noh dance at Kameido Tenjin Shrine with music and dance performed for the kami. 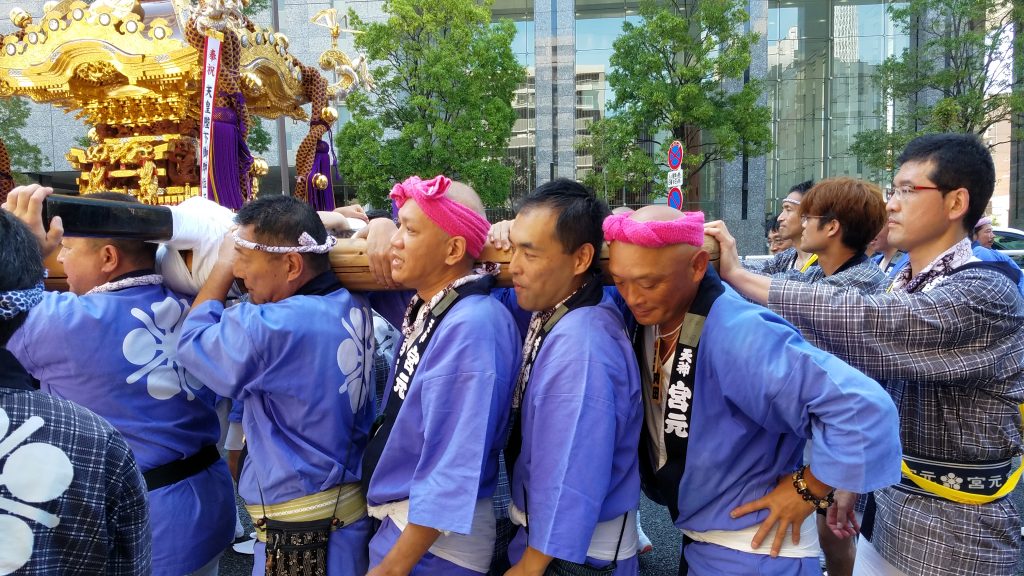 That was just the warm-up! 26 August was the main event. Mikoshi, (portable shrines), depart from 25 neighbourhood locations to musical accompaniment at Kameido Tenjin Shrine. The spirit of Tenman Tenjin rides within each portable shrine while bearers prance and sway to amuse the kami. The price of these mikoshi ranges from US$30,000 up to $100,000 for the more ornate versions. The children’s mikoshi have the same ornamentation but are scaled-down and much lighter.

The History of Kameido Tenjin

Kameido Tenmangu, as it was initially known, was founded in 1661. That year, Shinto Otorii, a priest of Dazaifu near Fukuoka, built a statue of Sugawara-no-Michizane in a small shrine. Sugawara-no-Michizane (845-903) was a ninth-century politician who was deified and renamed Tenjin after his death. A great poet and scholar, Sugawara is now regarded as the Shinto god of learning. Despite a long, successful career serving multiple Japanese emperors, Michizane eventually suffered from the political machinations of Fujiwara no Tokihira, and he was demoted from his position in the Imperial Court. Upon Michizane’s death several years later, a series of natural disasters struck Japan; some attributed these events to the ghost of Michizane. To appease the departed scholar’s spirit, several shrines were built in his honour, with many shrines portraying Michizane as a kami. Even after the disasters subsided, this tradition of honouring Michizane continued, and many more shrines were built in his name.

The next year (1662) Shinto Otorii built a larger shrine based on Dazaifu itself. The name of the shrine was changed to Kameido Jinja in 1873 and then Kameido Tenjin in 1936.

The original wooden structure was destroyed during the firebombing raids of World War II. In the years after the war, the shrine was rebuilt with modern materials.

The shrine’s main building, gates and elegantly arched red moon bridge were all constructed to resemble Dazaifu. The shrine grounds also contain several ponds bridged by drum bridges. The three bridges leading to the Honden (main shrine) – the Onnabashi (woman’s bridge), Otokobashi (men’s bridge), and Hirabashi – are said to represent life and the future, past, and present, respectively.

The shrine is part of Kameido local life. The shrine now attracts students of all ages who call on higher powers to help them pass their exams, appealing to Sugawara no Michizane for good grades that will lead to admission to top schools and universities. It is famous for its plum trees in late winter, purple weeping wisteria trellises in the spring (which look atmospheric even in summer as shown above) and blossoming chrysanthemums in autumn. The legendary wisterias here have appeared in many works of art; the most well-known of which is probably ‘In the Kameido Tenjin Shrine Compound’ (1856) by ukiyo-e master Utagawa Hiroshige, part of his ‘100 Famous Views of Edo’ series.

I shared this photo, and titled it ‘Even Tengu need some time off‘, in our weekly This Week in Tokyo blogpost for that week. The tengu, a supernatural being from Shinto lore, reflecting on life and taking a much-needed break, was one of my favourites of the day.

To say that this festival was off-the-beaten-track is an understatement. There was almost no English-language information about the parade… and that is where we come in! Maction Planet specialises in opening up events like this to visitors to Japan, giving you a truly authentic local experience.