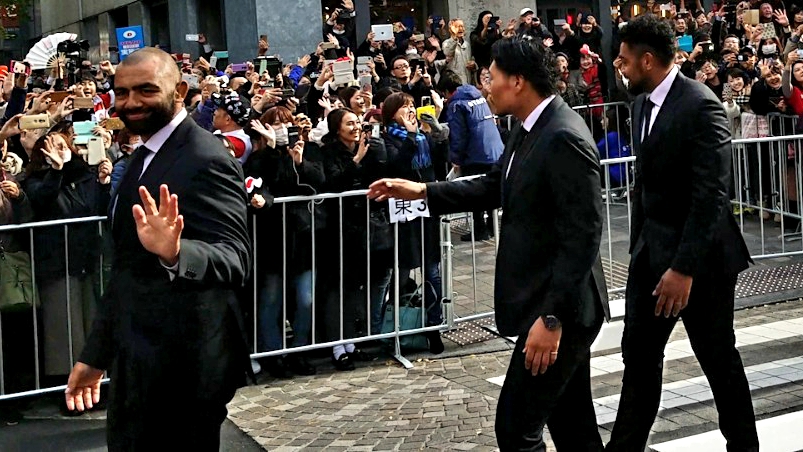 28 of the 31 members of Japan’s men’s national rugby team paraded through Marunouchi’s Naka-dori in Tokyo on Wednesday 11 December to express appreciation to their fans for their support during their historic run at Rugby World Cup 2019.

Over 50,000 fans gathered along the parade route to support the players, including stars Keita Inagaki, Kenki Fukuoka, Kotaro Matsushima and Yu Tamura.  In true ‘Only in Japan’ fashion the players, dressed in suits, walked the 800-metre route, which began behind the Peninsula Hotel and ended at the Marunouchi Building.

The Brave Blossoms exceeded expectations at the World Cup. They won all four of their Pool games, including victories Ireland and Scotland before losing in the quarterfinals to eventual winners South Africa.

Japan National Rugby Team captain Michael Leitch gave a speech before the parade, saying: “We were able to reach the quarter finals because you all sent us ‘Brave’ through the televisions, at the stadiums and around the country . I’m so happy Japan became ‘one team’ because of you, the fans. Hopefully, we will continue to work hard with the support of the fans so that Japanese rugby will be even more competitive, and we’ll do our best to play fun, encouraging games.”

Originally scheduled for midday, the parade’s start was delayed by 15 minutes but that did not spoil the electric atmosphere. The streets were packed with both long-term rugby fans and the niwaka, those who discovered their interest in the sport through Japan’s success at the World Cup. Some fans I spoke to took the day off work to attend!

Enjoy our exclusive straight-from-the-crowds coverage of the build-up, the parade itself and the aftermath which included Mac getting interviewed by TV Asahi, TV Niigata and TBS, including his appearance on their flagship show Nスタ! (N-Sta) highlighting our ground-breaking coverage of RWC19 on the Maction Planet YouTube. Watch here: