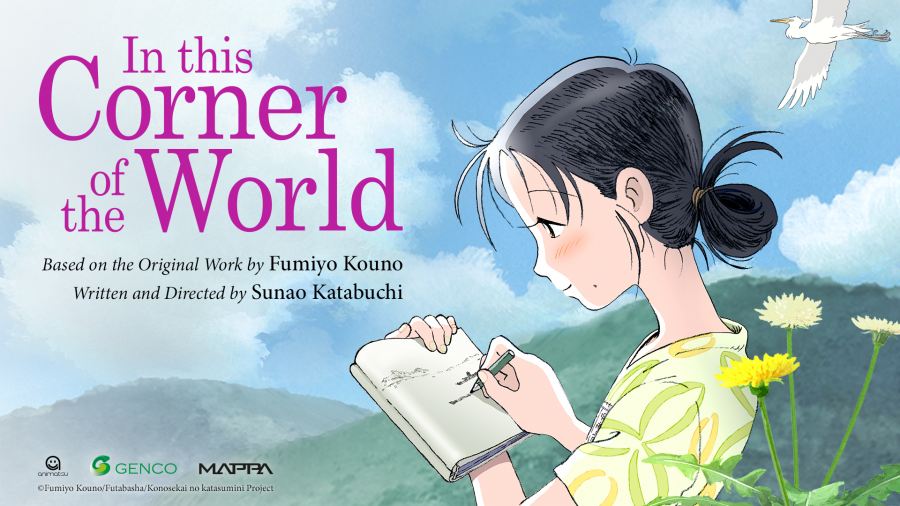 In This Corner of the World

‘In This Corner of the World’, the most important film to come out of Japan in 2016, gets its domestic DVD and Blu-ray release today. We take a detailed look at this anime classic.

Our guests regularly ask us, either before, during or after their visit to The World’s Greatest Metropolis, for advice on what to watch or read so they can learn more about Tokyo and Japan. Whether it’s history, religion, the underworld, anime, manga, fantasy or reality, we can help.

One film from 2016 really captured the hearts of the Maction Planet team, and that is Sunao Katabachi’s ‘In This Corner of the World’. (この世界の片隅に Kono Sekai no Katasumi ni). It came out in cinemas here on 12 November 2016. Mac, our founder took the team to watch it soon after, with obligatory karaoke afterwards. Being a war film, we wondered whether we would be in the mood to sing afterwards.

The film is based on a manga by Fumiyo Kono, a native of Hiroshima City, which ran from 2007 to 2009. It was the recipient of the Excellence Prize in the Manga Awards of the 2009 Japan Media Arts Festival. The film itself has also been collecting accolades. One which turned heads was from Kinema Junposha, Japan’s oldest film magazine founded in 1919. They have published an annual list of their Top 10 films since 1926. In This Corner of the World topped the best Japanese film list in 2016, beating out Shin Gojira (2nd) and Harmonium (3rd). It was the first time in 28 years that an animated film had taken first place (My Neighbour Totoro in 1988).

In This Corner of the World tells the story of Suzu. Suzu, a happy-go-lucky child, lives simply in Hiroshima. The tale begins in the late 1930s. Suzu receives a marriage proposal from a stranger name Shusaku, via omiai. She moves to Kure, a port 20km away from Hiroshima. The importance of Kure meant it was on receiving end of concentrated air raid bombings from American forces. Suzu is a well-rounded character,  and her grounded personality serves as the perfect juxtaposition to the horrors of the war.

The film’s focus is on the protagonists’ everyday life, whether it is making rations last longer, cooking using weeds due to food shortages or an accidental trip to Kure’s red-light district. In some way, the war is the backdrop to highlighting these everyday experiences. Despite its humor, the film is unflinching honest, and gets bleaker into its inevitable, inexorable conclusion. The film has drawn parallels with Studio Ghibli’s Grave of the Fireflies. Certainly they both do not shy away from the horrors of war. However, In This Corner of the World is much more gentle and bittersweet in its approach, with the spotlight on the people involved rather than on some grand narrative.

A true labour of love, the film is incredibly well researched. The production team used photographs, maps and conducted field trips, even measuring buildings and roads, and seeking first hand testimony from survivors. They filled in the gaps from the existing records, allowing the animators to build accurate townscapes. In this regard, the film serves as a documentary record of life in the Hiroshima area before the absolute devastation of the Atomic Bomb.

The March 11, 2011 Great East Japan Earthquake, which occurred early in the film’s production, also had an influence on the film. The devastated landscape, the senseless destruction and the way people react to such events clearly all informed the movie.

The film is a love letter to true old-school 2D hand-drawn animation. The backgrounds are watercolour, all handpainted, which is very rare to see now, as it is significantly more time consuming that digital painting. One of the only ways Suzu expresses herself is through painting, and the animators felt that having a more traditional feel to the film would allow us to enter her world more successfully. The technique of fureme, visible brushstrokes, was used to further ground the viewer in this world. It truly highlight the handmade approach and the thousands of hours of effort which went into the production.

Director Sunao Katabuchi is best known for the acclaimed Mai Mai Miracle, released in 2009, which tells the story of Shinko’s transition from the world of childhood to adulthood. The voice acting is top notch. Suzu is voiced by Non (the stage name of Rena Nonen), with Yoshimasa Hosoya voicing her husband Shusaku. We all the soundtrack can make-or-break a film like this, and Kotringo’s haunting melodies play a huge part in creating the atmosphere of the film.

Incredibly, In This Corner of the World was made with a budget of only ¥250mn ($2.26mn). The film’s journey to completion itself is one of triumph over adversity. Fundraising was one obstacle. The production team however were committed and believed in the film’s message.  A shorter, pilot film was produced to help sell the message to potential backers, and this required crowdfunding. Over ¥39mn was raised to support this effort. The silent pilot was able to generate enough attention to ensure the film got to be made.

We hate spoilers at Maction Planet, so all we will say is that the ending is as optimistic and empowering as it could be for a film handling this most depressing of subject matter. We did feel like singing after all, and off we went to Karaoke to celebrate the joy of life.