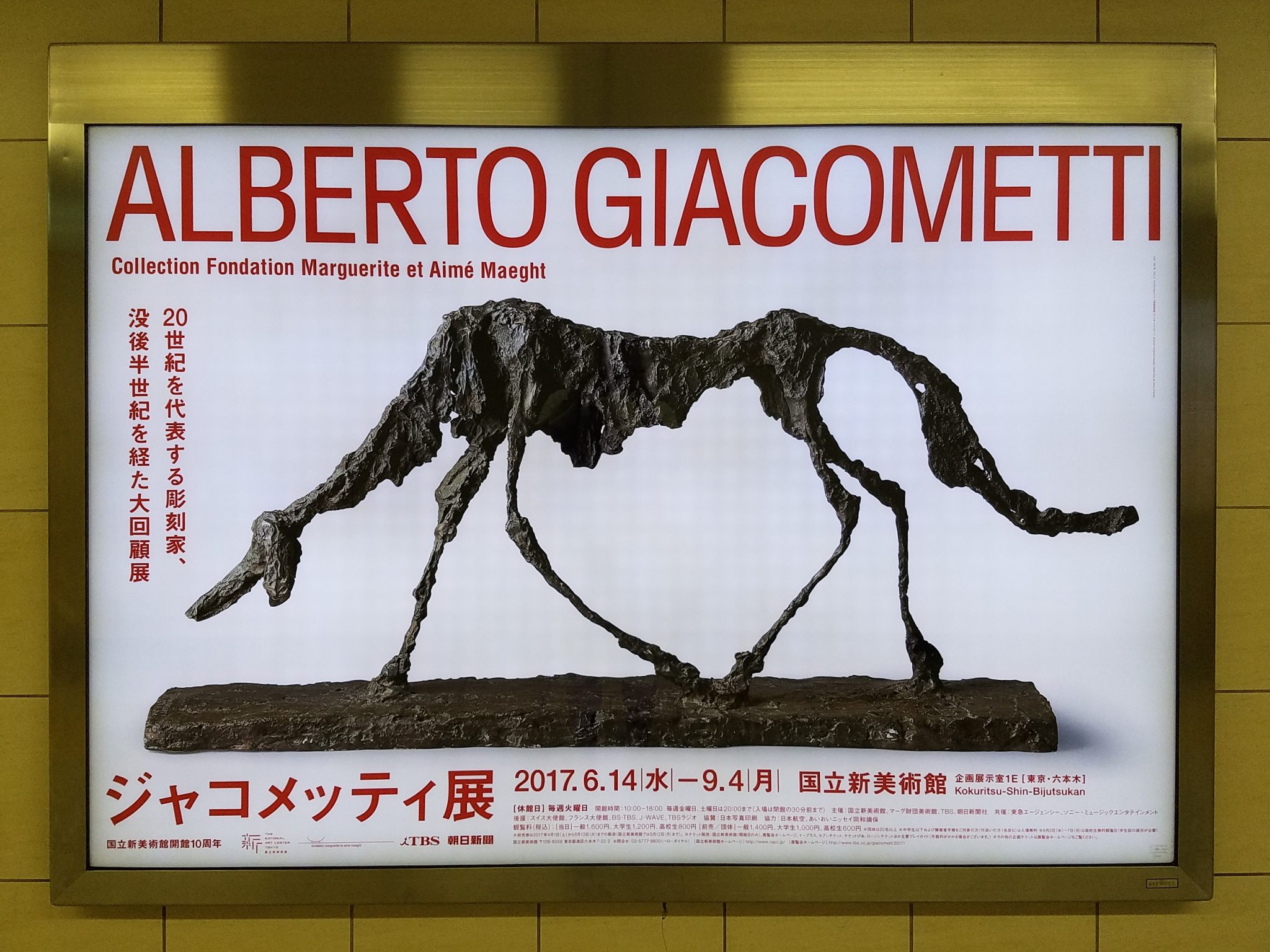 As part of its ongoing 10th Anniversary celebrations, The National Art Centre in Nogizaka is currently holding an incredible exhibition of the works of Alberto Giacometti (1901-1966), drawing primarily from the Collection of The Fondation Marguerite et Aimé Maeght. Mac, Founder of Maction Planet, went to check it out. 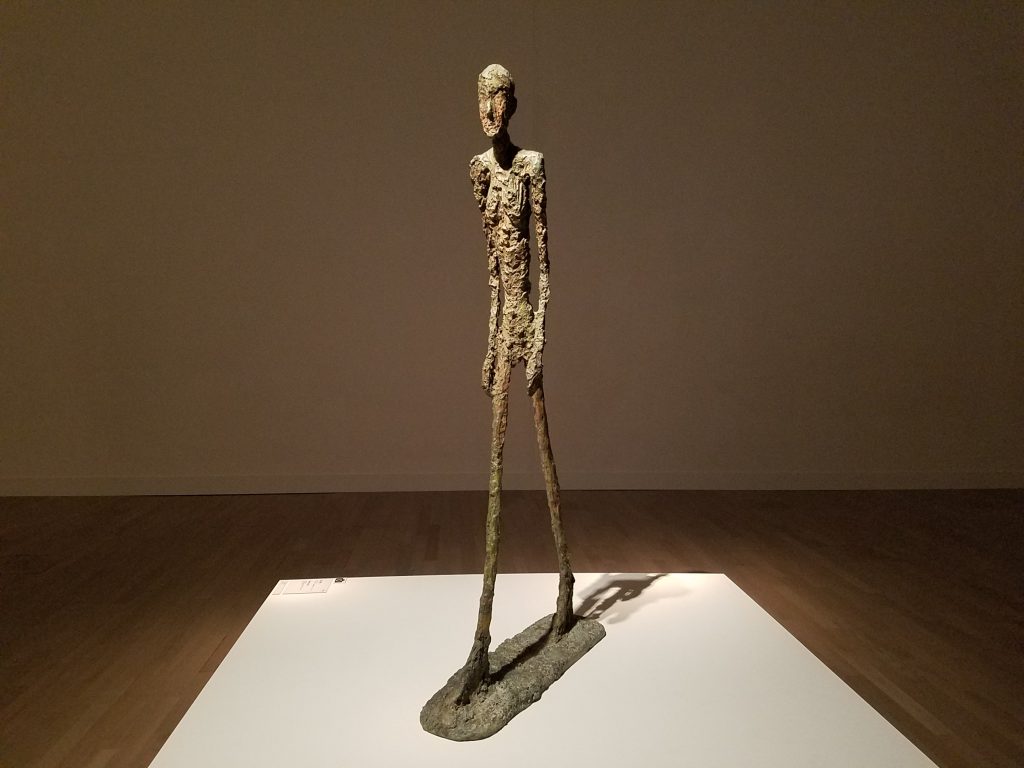 The exhibition of some 130 works, which runs from 14 June to 4 September 2017, provides a comprehensive retrospective of Giacometti’s life and artistic career. For those who were lucky enough to catch it, this exhibition perfectly compliments the eye-opening ‘Giacometti: Pure Presence’ Exhibition which was held at the National Portrait Gallery in London from October 2015 – January 2016.The Fondacion Maeght, which has loaned most of the works on display, has one of the Top 3 collections of the artist’s works, alongside the Giacometti Foundations in Zurich and Paris. Galerie Maeght first exhibited Giacometti’s works in 1947. In 1951 they presented his first solo postwar exhibition in Paris. In 1964, the Fondacion opened. Giacometti contributed to its opening by newly casting 35 existing sculptures and donating 30 drawings and roughly 100 prints. The Fondacion’s pieces are complimented by key works from domestic collections.

Among the masterpieces on display are: ‘Spoon Woman’, Giacometti’s first monumental sculpture; ‘The Nose’ (from the Osaka City Museum of Modern Art); 1947’s ‘Large Figurine (Woman Leoni)’ – modelled on Isabel, Giacometti’s lover at the time, this was his first statue with an elongated human form which became his signature motif.

“I have a tendency to amplify the distance between the model and myself. The closer I get to something the more distant it becomes” – Alberto Giacometti

Despite becoming famous for his stretched figures, stripped of all but the essentials, Giacometti’s marriage to Annette Arm in 1949 led to more rounded figures overall. He met Annette in 1943 – a 20 year old working at the Red Cross in Geneva. Her ability to pose for long periods of time, one of the great demands Giacometti made on his sitters, led to drawings, paintings and sculptures that were now more voluptuous and fleshed out.

“If I move even a little, Giacometti, engaged in his work of watching me intently, would let out a desperate cry as if he had suffered a major accident” – Isaku Yanaihara

One of the most important sections of the exhibition is devoted to Japanese philosopher Isaku Yanaihara, who became one of Giacometti’s models. While attempts to crowbar the ‘Japan connection’ into some exhibitions in Tokyo can at times feel a little forced, this is absolutely not the case here. The poet Usami Eiji asked Yanaihara to deliver an essay he had written about Giacometti to the artist, and it was the existentialist founder Jean-Paul Sartre who introduced Yanaihara to Giacometti. In 1956 Giacometti asked the philosopher to pose for him, which he did, for 72 consecutive days! There were further sittings in ’57, ’59, ’60 and ’61. In total, Yanaihara sat for Giacometti for 230 days, which led to 20 oil portraits and 2 sculptures. The two became intimate friends, despite (or regardless of) the fact that Yanaihara was the lover of Giacometti’s wife Annette, with the full knowledge of Giacometti – a fact the exhibition does not touch on.

From an art history perspective some of the most interesting pieces on display are doodles and sketches, saved by Yanaihara, which Giacometti made in cafes on napkins and newspapers. These are all now part of the collection of the Museum of Modern Art, Kamakura and Hayama. One section exhibits some of Giacometti’s Still Lifes. The parallels with Cézanne are clear cut. Some have argued that Giacometti is Cézanne’s most legitimate successor in producing art directly expressing his perceptions. The exhibition talks about how they both placed huge demands on their models. I would like to have seen a little more here as it is a fascinating topic to delve into. However their connection was deftly explored by a 2008 exhibition at the Louisiana Museum of Modern Art in Denmark, so perhaps the curators did not feel that they had anything new to add to the discourse given the limited availability of suitable works. Recently the National Art Centre has started allowing photos in one of the rooms of some of its major exhibitions. This time, you can take your own shots of the monumental “Standing Woman”, “Head” and “Walking Man”; the fruits of an aborted project for Chase Manhattan Bank in New York.

The exhibition ends on a literary note. The penultimate section exhibits collaborations with writers he influenced such as Jean-Paul Satre, Jacques Dupin, and Andre Breton. Then, rather fittingly, the overview ends with “Paris Without End”. The “Paris Sans Fin” project was published posthumously in 1966.  It is comprised of some 150 lithographs that Giacometti had worked on since 1959 which were published alongside his unfinished text. The illustrations are all in lithographic pencil, his medium of choice to capture the city’s “unending riches”, as he wandered around attempting to document the city he loved.

Giacometti felt about Paris the way we at Maction Planet feel about Tokyo: “…looking all around for something that drew my interest, walking as quickly as I could through the streets, and the city whose secrets I sought to uncover so rapidly suddenly turned into an infinite mystery, with unending riches as far as the eye could see.”

The gift shop as always has all sorts of goodies. As well as the postcards, clear files (a staple of any gift shop here) and T-shirts, there was also craft nihonshu and karinto – a sweet, deep-fried traditional Japanese snack! For the nihonshu  – a Daiginjo – the connection is that… “Giacometti removed ostentation to get to the essence of human beings, then reached his singular molding style. The process has something in common with making Daiginjo, removing unnecessary things from the rice and polishing it up.” The long, thin, exhibition-exclusive bottles are meant to evoke Giacometti’s statues. There is even an ‘Oyaji Gyagu’ – an Old Man’s joke – on the label. ジャコメッティ, the katakana for Giacometti, becomes ジャ米ティ. ‘米’, kome, is the kanji for rice! The marketing for the karinto is awesome. “Don’t you think the forms/shapes of Giacometti sculptures and the forms/shapes of Karinto look similar?” says the blurb explaining this interesting collaboration. They have even come up with a portmanteau name – Giacorinto. Genius! After the madness of the last few months, with the epic lines of the Yayoi Kusama and Alphonse Mucha exhibitions (60 minute waits to get in, and 45 minute lines just to pay at the gift shop!), it was nice to return to a more collected atmosphere at The National Art Centre. It truly is one of the great art spaces in Tokyo and indeed the world.

“The world astounds me more and more every day. It had become even vaster, greater, more difficult to comprehend and more beautiful.” – Alberto Giacometti Maction Planet’s Tokyo Art Tours are well-renowned. Whether you are after a specialist art tour, or you just want to enjoy the street art and statues around the city, we can help. We can customise your Tokyo experience around a major exhibition, or visit some smaller galleries and gain insights into their ethos and modus operandi. Whatever your interests, contact us at info@mactionplanet.com to begin your journey to your perfect, personalised time in The World’s Greatest Metropolis!