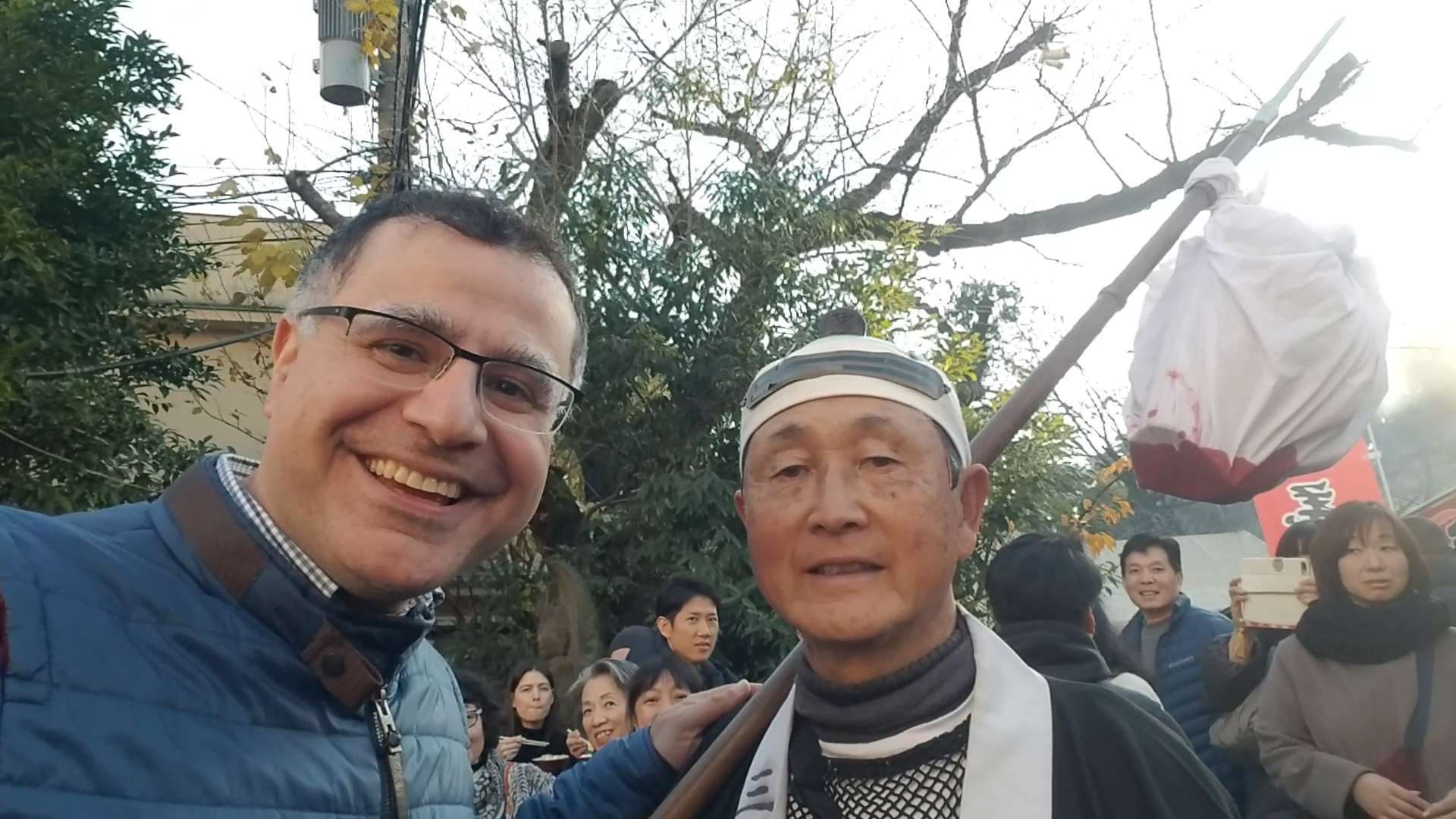 On a sunny Saturday in December 2019, Mac embarked on a pilgrimage to Sengakuji Temple to pay his respects at the Ako Gishi Sai Festival of the 47 Ronin, the masterless samurai who embody the ultimate concept of loyalty… at least, that’s the story. We made a video of the festival! Learn more about this infamous legend and watch Mac’s journey!

On 14 December 2019, I attended a festival called the Akō Gishi Sai (赤穂義士祭) that marked the 317th anniversary of the Akō incident of the 47 Ronin. In history books it’s referred to as the ‘Genroku Ako Incident’ (‘Genroku’ is the name of the period from 1688 to 1704) but is more commonly known as the ‘Chushingura’ or ‘The Treasury of Loyal Retainers’. The festival is held at Sengakuji, a Soto Zen Buddhist temple established in 1612 in Minato-ku near Shinagawa.

So what is this story of the 47 Ronin? Well, it’s one of the defining stories of Edo-era Japan. There is a long version and a short version. Here’s the short one:

In 1701, Kira Yoshihisa was a court official at Edo castle who taught court etiquette to visiting feudal lords, but by all accounts he was an arrogant, rude and possibly corrupt man. While giving instruction, Kira was continually disrespectful towards Lord Asano Naganori, the daimyo of Ako, and the straw that broke the camel’s back was calling him a country boor with no manners. Asano was so offended that he assaulted Kira with his sword, wounding him in the face. Violence of any kind was forbidden in Edo Castle which was the shogun’s residence. As a result, Shogun  Tokugawa Tsunayoshi, punished Asano with an order to commit suicide by seppuku, or hara-kiri, on the very same day. Crucially, the shogun also forbade any revenge in this case.

However some of Lord Asano’s retainers, now known as the 47 ronin, could not accept this outcome. Led by their chief retainer, Oishi Kuranosuke Yoshitaka, they made it their mission to avenge the death of their master despite knowledge of the dire consequences. On 14 December 1702, they exacted their revenge, killing Kira and presenting his severed head to their former Lord Asano at his grave.

There were weeks of deliberation about what to do with these men who had disobeyed a direct order from the shogunate. Finally a decision was made. The Shogun ordered all of them to commit Seppuku on the 4th February 1703, sparing them humiliation by beheading. They were immediately buried next to the grave of their master, separated into four blocks reflecting the residences in which they had been accommodated during the tribunal process.

“You can’t handle the truth!”

By all historical accounts, the reality was very different to this legend! Asano was the real bad guy, Lord Kira was a bumbling bureaucrat and ‘the 47’ had many ulterior motives. The truth is a story for another time, and no one really cares.

The discrepancy – this gap between fact and fiction – is almost certainly true for any historical event that makes it into the psyche of a nation. Popular legend, as first spread by the fictionalised theatrical accounts of the incident, say the ronin took their revenge out of a sense of 忠孝 (chuko) or 忠義 (chugi) – two words for loyalty that are often associated with the story. Everyone loves a good story, especially one that cuts to the heart of the self-image of a people, and the many pilgrimages to these graves shows the importance of the story to this day.

Every year, Sengakuji Temple holds the Ako Gishi Sai on 14 December, the date in our modern calendar which aligns with the day that the ronin killed Kira. At 11:00, a memorial service is held by the Zen Buddhist monks and around 15:30, a parade starts at Zojoji Temple and proceeds to Sengakuji. A group of men from Zaikai Nisei Gakuin portray the ronin who remained loyal to their lord and defied the shogun. You can even see Jirozaemon Mimura proudly bearing the severed head of Lord Kira Yoshihisa. At the end of their procession, they reach Lord Asano Naganori’s grave and present the severed head of Lord Kira Yoshihisa before handing themselves in to the shogunate to accept their fate.

Along with the stalls serving traditional Japanese festival food and the bustling crowds laying incense at the ronin’s graves the whole spectacle makes for a fun and fascinating day out.

See for yourself! Watch our video of the festival held on 14 December 2019. Enjoy, and We continue…